E3 2019 Interview: Edelweiss on Sakuna: Of Rice and Ruin 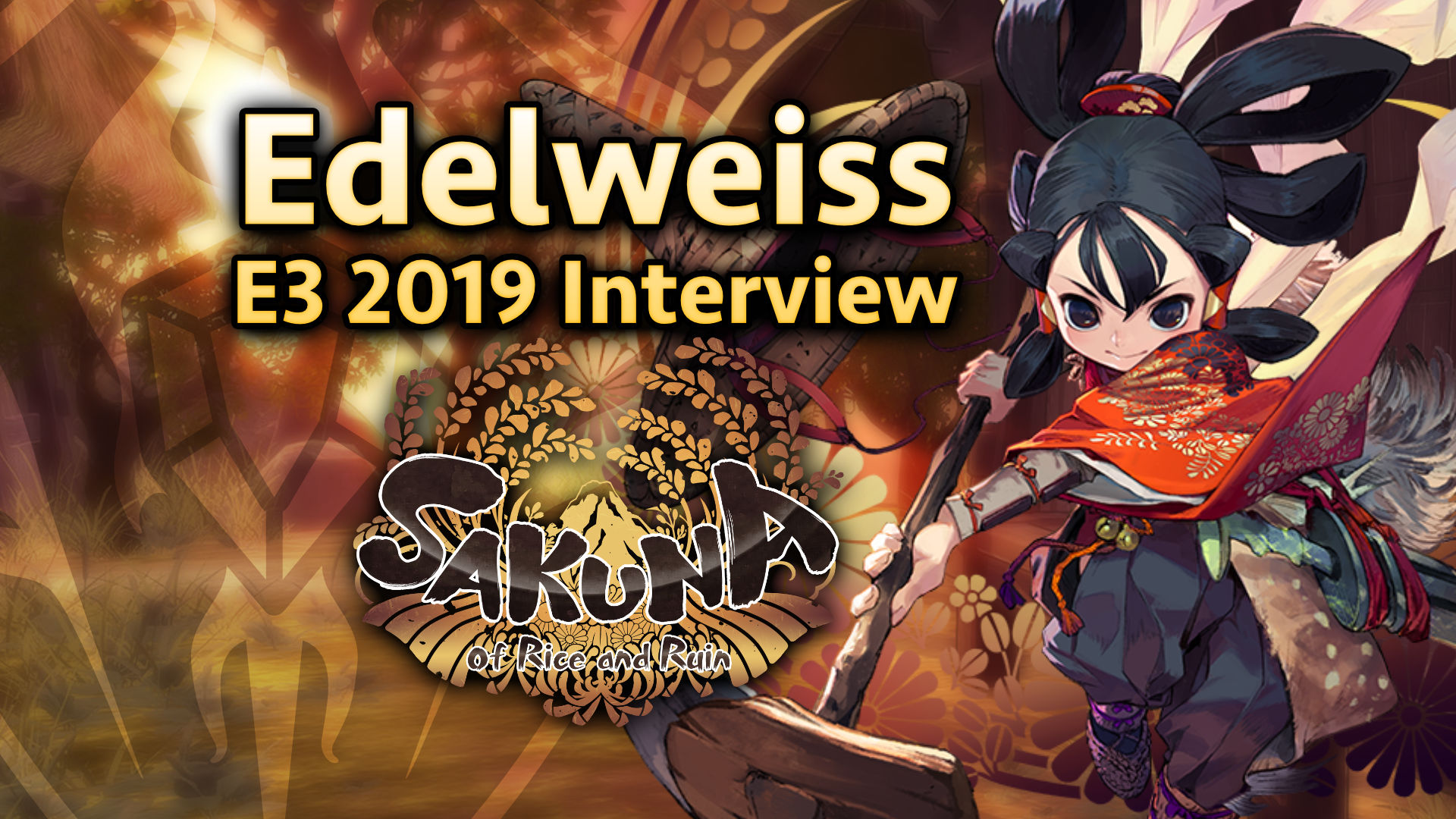 by Zach Wilkerson and Stephanie Sybydlo

If you’ve been following our coverage of E3 for the last couple of years, it’s no secret we are eagerly awaiting the release of Sakuna: Of Rice and Ruin. The game follows Sakuna, a harvest goddess who has been banished to a dangerous, demon-filled island with a group of outcast humans. She must prove herself worthy by protecting the humans from the monsters of the island while also harvesting rice for the locals. Sakuna: Of Rice and Ruin‘s totally unique blend of side-scrolling combat and farming simulation, along with its adorable and unique aesthetic impress us each time we get our hands on it. Add to that a localization in the capable hands of XSEED, and you can see why Sakuna won our award for Best Action RPG of E3 2018.

One of the most impressive elements of Sakuna: Of Rice and Ruin is that it was created by two men at the independent Japanese development studio Edelweiss: Director Nal and CG Artist Koichi. Stephanie Sybydlo and I had the opportunity to sit down with them at the XSEED booth at E3 and chat (with the help of a translator) about the game’s development cycle, its length, and where they might go after Sakuna, all while we watched them play through the demo (flawlessly, by the way).

The translator often didn’t distinguish between the responses of the two developers, so we will present them as one response in most cases. We also have made some mild adjustments to the responses for clarity and length.

RPGFan: The farming aesthetic of Sakuna: Of Rice and Ruin is pretty unique. What inspired the farming elements of this game?

Nal: I grew up in a suburban area, so I was surrounded by a farming area. I wanted to bring my view of my childhood to a video game.

RPGFan: Is there a set date for when the game is going to come out?

Nal and Koichi: So far, we only know this winter.

RPGFan: How long is Sakuna: Of Rice and Ruin? Are there many levels?

Nal and Koichi: The playthrough time is still up in the air since we’re still in development. It will probably be about 20 hours. It’s so hard to say how many dungeons there will be, but on the map, there will be about 120 screens worth of content.

RPGFan: Are there any games that inspired this one? I see how intense the combat is, and to add farming on top of that is interesting.

Nal and Koichi: The action part of the game was inspired by Devil May Cry.

RPGFan: Are there a lot of clothing and equipment options available?

Nal and Koichi: There are going to be a variety of weapons that look different; she also has a mask or a hat. There will be about ten different types of weapons available.

RPGFan: What would you say is the balance between fighting and farming?

Nal and Koichi: This is more of an action game, so there will be more focus on fighting than on farming.

RPGFan: What’s the story like? A lot of farming sims are very slice-of-life.

Nal and Koichi: In terms of the life part, the story plays like other farming sims, but something that is unique about this game is that there are different seasons, and there will be different things to do in each season. You will see the full season, and you’ll be able to feel it. We want the seasons to tell and drive the story, so that’s something that people will be able to enjoy about the game.

RPGFan: Is there a lot of research that goes into a game like this? Especially working with such a small team, are you looking for outside help on gameplay, or with all the references to Japanese culture?

Nal and Koichi: We have been going to some museums in Japan — generally smaller ones that go into Japanese history. We’ve also gone to a specific area that has an old schoolhouse that inspired the aesthetic. We’ve also visited libraries to research old-school Japanese houses and farming tools. We also referenced a Japanese dictionary that was made by Portuguese people who visited Japan in ancient times. So it’s been useful to try looking at ancient Japan through the eyes of foreigners, helping us see it with a different perspective. If you ever visit Japan and go to those smaller villages, you’ll see a lot of things that look just like what you see in the game.

We actually sat down with a farming device and took a look at the inside of it to try to get a feel for how it works, and we really struggled with it.

RPGFan: So when it comes to such a small workforce, how was the work divided between the two of you?

Nal: My role was programming, VFX, all the sound effects, and game design.

Koichi: My role was mainly with the story scenario and graphics.

RPGFan: What was it like to find each other to work on such a large project, especially for so long?

Nal and Koichi: We actually found each other on the internet when we were younger. We were talking about our opinions on the video game industry. Then we started arguing, one of us would say “I don’t think so,” and then we started talking about more things, and it went from there.

RPGFan: Is there a good work balance? Do you work well together? Do you prefer working with a smaller staff?

Nal and Koichi: So when you’re in a bigger team, sometimes you don’t know what’s happening in this department or that department. There’s nothing we don’t understand on a smaller team, and we help each other with our work as well. Now that we have so many roles, though, sometimes we don’t remember what the other is doing anymore.

RPGFan: Is it intimidating to take on such a large project with only two people?

Koichi: There are a lot of things I have to do where I don’t have the skills to do them effectively. It’s not pressure, but I have to improve myself to do things I’m not very skilled at.

Nal: I started at Edelweiss by myself, so I had to do everything myself. But now that I have a team, I feel like I can lean on them more and the things they do are done more skillfully.

RPGFan: What were some of the most difficult parts to program?

Nal and Koichi: I don’t want to get too technical, but the farming part was very difficult because it’s very different from anything else, so there was no reference point.

RPGFan: The design of Sakuna is so inspired. Did anything influence the design process, specifically for the main character?

Nal and Koichi: There wasn’t any specific inspiration, but we wanted her to seem like a girl from the suburbs. Originally, she looked more like a classical fantasy character, so we asked for her to be redesigned to appear more normal. Her clothing, however, was inspired by styles in the northern part of Japan. Her costume also changes between when she’s out hunting and when she’s farming.

RPGFan: I’m guessing you contracted someone else to do the music? What was the process like? Was there a lot of back and forth to make it match your vision?

Nal and Koichi: We like to listen to music, and there was a particular artist we liked. So when we started making Sakuna, we reached out to them and they agreed to compose the music. As soon as we heard their work, we were happy with it, so we didn’t need to have any back and forth about it.

RPGFan: Are you thinking about what you’re going to do next? Projects in the future?

Nal and Koichi: There are a lot of things we want to try out, but we want to finish this first, so we’re trying not to think about it right now.

RPGFan: Are there any plans to add DLC to the game?

Nal and Koichi: There are no plans for DLC at this point.

RPGFan: Are you feeling any relief that the game is about to be released?

Nal and Koichi: We’re still working really hard on the game, so we’re not feeling any relief quite yet!

RPGFan: Is there anything else you want us to share with our readers?

Nal and Koichi: We want to apologize for the game taking so long! Working at Edelweiss, we feel like this is going to be a really great game, and we think this might be a turning point for the company. We’re really looking forward to it. We also haven’t had a chance to show much of the farming in the game yet, either, but there’s a lot of detail in it.

We’d like to thank Nal and Koichi, Edelweiss, and XSEED for giving us the opportunity to sit down and talk about Sakuna: Of Rice and Ruin. It’s due out for Windows, Nintendo Switch, and PS4 this winter, and we can’t wait to get our hands on it.