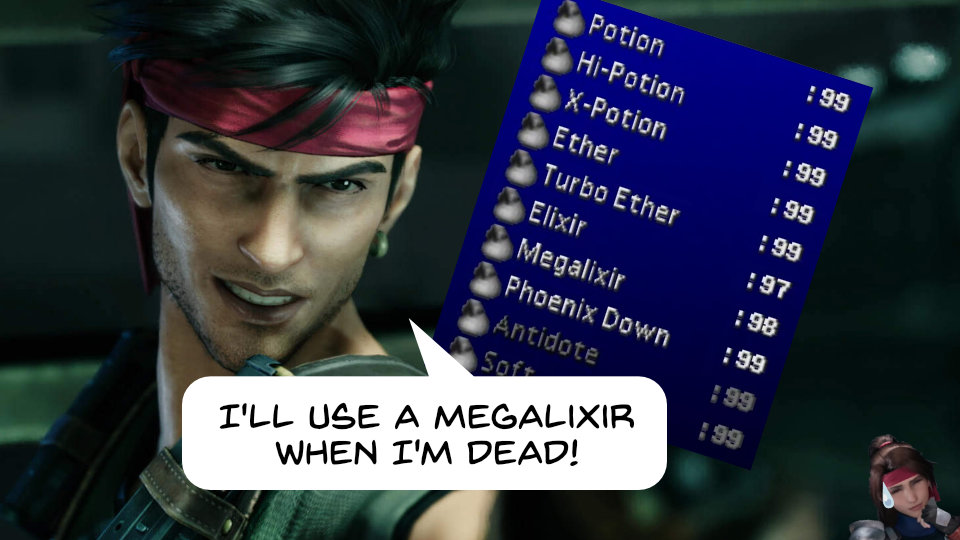 “There might not be another, so I’ll keep this until I really need it.”

Do these sound like things you’ve said while playing RPGs? They sure do to me. I’m Mark, and I’m a recovering hoarder, particularly when it comes to video games.

Saving a Megalixir or a Moon Dew for the “right time” is a staple of ’80s and ’90s gaming. If you grew up somewhere between the NES and the original PlayStation, chances are you learned how to save the big items and never ever use them. Not even if you got 99 of that item and there was no possible way to run out. Games were a lot more opaque back then, a lot less balanced. They demanded you reserve your best for critical encounters or else you’d find yourself reloading your save after a particularly nasty boss encounter.

I still remember the first time I started saving items. It was Final Fantasy VI, the World of Ruin, and the quest to re-recruit the Really Cool Ninja™: Shadow. It was 1995 and I was late to discovering RPGs, but I sure started out strong with “Final Fantasy III.” Shadow quickly became a favourite, and then the apocalypse happened.

In case you didn’t know, about midway through the game, the world of FFVI becomes a cataclysmic hellscape and you have to go around finding your party members, scattered from the events that brought about the end times. Some require a simple invitation, others have long sidequests associated with them, and still others are “optional.” One such option is Shadow.

Shadow must be recruited in the Coliseum by betting his old weapon, Striker as a prize for the match. The only problem was, I had sold Striker a long time ago, and didn’t know in advance about the prerequisites to recruit my long-lost ninja buddy. When I found out, I was crestfallen! I swore then to never make such a mistake again. I’d check and double-check if a game had a requirement like that. I even sometimes straight up kept the original equipment of characters I’d recruit in other games, just in case.

Of course, this was all silly. Not only could you find another Striker around the same time as trying to recruit Shadow again, but few, if any, other games have had such an item requirement without making it virtually impossible to sell, trash, or otherwise rid yourself of the item. The developers of FFVI also weren’t that cruel; I just didn’t know it at the time.

It sure engendered the habit of item saving, though. While I’d always had a bit of caution about using items, fed in part by other RPG-loving friends who did the same, the “Striker incident” pushed me hard towards hoarding. Moon Dews in Phantasy Star? Saved. Megalixirs in Chrono Trigger? Untouched. Call Beads in Secret of Evermore? Not even once.

It wasn’t until maybe 2015-2016 that I started to come off my hoarding problem. I began to pay a lot more attention to how games were actually laid out, how their item vs. statistic economies worked, and dropped my prejudice against walkthroughs. It helped that games had come a long way in terms of difficulty curves and hostile design. Chances are the development team had given quite a bit of thought toward how best to arm the player for their circumstances, and they weren’t out to punish you.

Games designed in the ’80s and ’90s had been informed by the arcade economy, which prioritized squeezing quarters out of teenagers. That meant introducing all kinds of difficulty. While you couldn’t punish a player too much to the point they’d stop playing, there still had to be roadblocks. Sometimes it would be a boss who was a damage sponge. Other times it would be holes in the floor that cost you a life. Whatever the case, home consoles soon inherited a problem.

While RPGs aren’t “hard” in the same sense that platformers and shoot-em-ups are, the further you regress in time, the more grinding becomes intrinsic to game design. Phantasy Star is a good example of this. You can bring yourself up to level with any given area, easily putting away the local giants, bugs, and haywire robots. Then you’ll run into a boss fight, get your pants handed to you, and have to start over from the last save point. No choice but to grind, right? In that sense, RPGs were being informed by the difficulty from other genres. If they were too easy, they weren’t “real” games for teens and young adults, they were easy games for kids.

That’s why Final Fantasy IV: Easy Type exists (more on that another time).

These kinds of design decisions definitely informed the item hoarding habit, both my own and for countless gamers I’ve talked to. It didn’t matter if you were playing Dragon Warrior with its opaque difficulty spikes or Chrono Trigger with its well-designed curves, it was in your brain: save those big-ticket items!

It Got Better (but I still hoard sometimes)

Games do telegraph upcoming problems a lot better these days. I can usually save anywhere, retry from the boss fight itself, and items tend to be less scarce. Difficulty is handled using more fair and balanced methods now. I’m less likely to suddenly be faced with a sharp incline in overwhelming boss level and power, and more likely to need to consider my strategy for identifying a weakness or key attack pattern.

These days, most of my item hoarding is sentimental. If I play Phantasy Star IV, I’m going to keep Alys’ original Slashers. I might hang on to Peach’s frying pan in Super Mario RPG out of amusement. But sometimes I still come across a “Mega” this or “X” that and think to myself, “I’d better save this.” Y’know. Just in case.