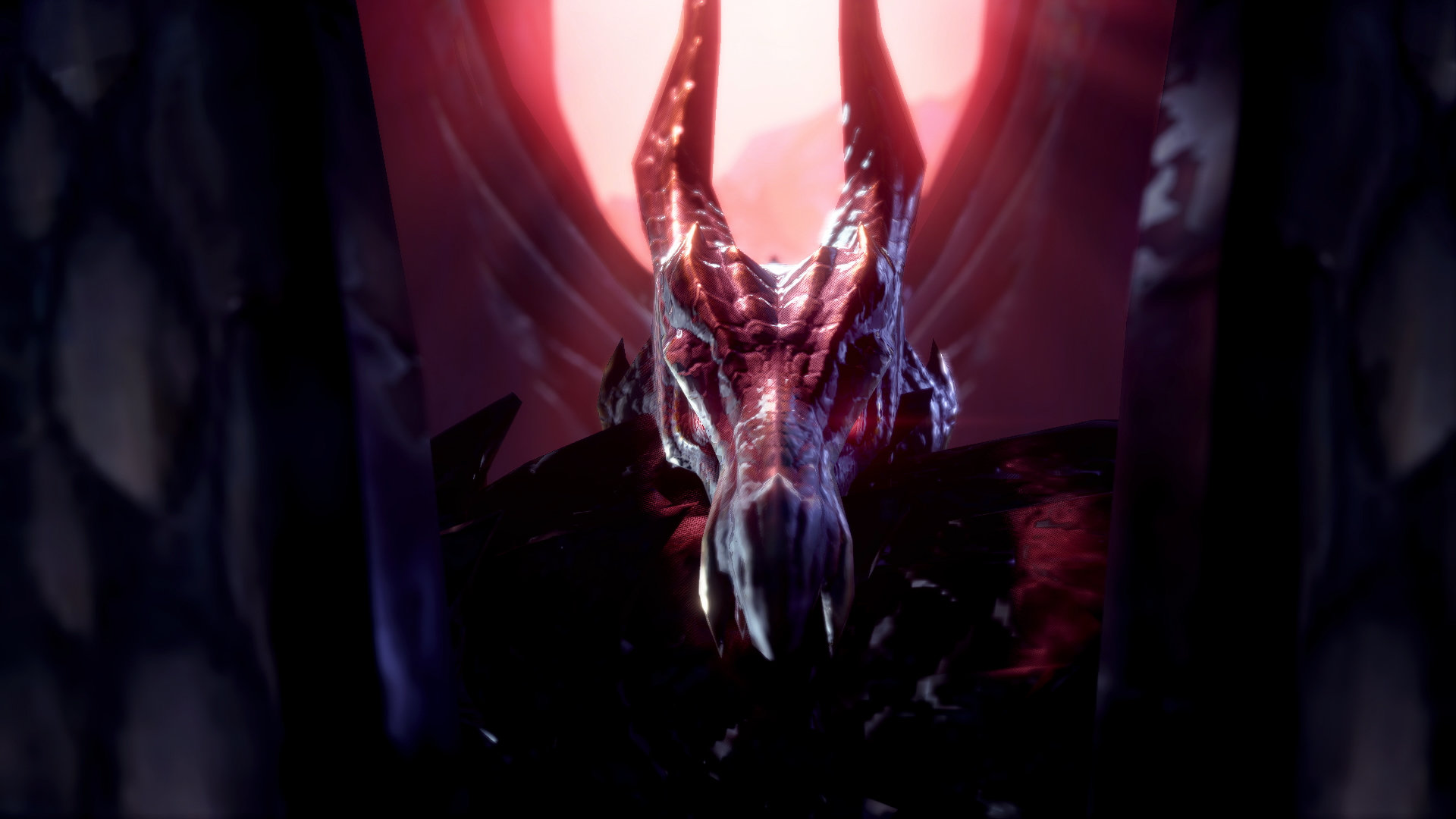 Monster Hunter is a series of multiplayer action RPGs starring player-created hunters challenging hosts of dinosaurs, dragons, and all manner of other monsters in protracted boss fights. “MonHun” has become one of Capcom’s biggest series, with sixteen main-series games and expansions over the past seventeen years, the latest of which, Monster Hunter Rise, sold over 7.5 million copies in its first six months.

On September 23rd, 2021, Nintendo officially unveiled the Sunbreak expansion to Monster Hunter Rise in a Nintendo Direct event. One week later on the 30th, Capcom’s Tokyo Game Show presentation provided some extra details on the 2022 DLC, introducing the bloodsucking Elder Dragon Malzeno as Sunbreak‘s flagship monster and the enormous hermit crab Shogun Ceanataur as a returning monster. Although currently a Switch exclusive, the PC version of Monster Hunter Rise is releasing on Steam on January 12th, 2022, and Sunbreak will release on both Switch and Steam in “Summer 2022,” with more information dropping sporadically until Sunbreak dawns.

My early impression of Sunbreak is that it looks fabulous. Malzeno and the new castle ruins zone (which has yet to receive an official name) suggest design inspiration from European fantasy, when Rise‘s new monsters all took inspiration from Yokai (Japanese folkloric monsters or spirits). Master Rank quests and a journey to a new base of operations present exciting opportunities to flesh out Monster Hunter‘s beautiful world, and the promise of “new Hunter actions” has my imagination ablaze with the possibilities of new Hammer techniques to compliment the magnificent Impact Crater.

Fan expectations are high. Two major criticisms of Monster Hunter Rise are the stagnant endgame and the relatively low monster count (46 boss-sized monsters to 2019’s Monster Hunter World: Iceborne‘s 71). Monster Hunter expansions typically improve both of those significantly, and fans are already excited about what might return in that expanded roster of monsters. Naturally, being a longtime MonHun fan and occasional MonHun obsessive, I have a few ideas.

In this exercise I’m going to identify ten* iconic Monster Hunter monsters that would be excellent candidates for inclusion in Sunbreak. As criteria for these selections I’m considering how interesting each of their fights are, how they could diversify Monster Hunter Rise‘s collection of cryptids, and how they fit into Sunbreak‘s theme of adapting “real world” monsters into Monster Hunter‘s style. I’m not picking any color subspecies like Silver Rathalos, Deviant monsters like Bloodbath Diablos, or angry variants like Furious Rajang. Naturally, this is all a product of my own tastes and preferences, and the list is ranked roughly by Dopeness.**

* This is more accurately a list of thirteen monsters, because I don’t have the firmest grasp of the concept of integers.
** Not a scientific measurement.

Several of the YouTube videos below are borrowed from Mekkah Dee, a cataloger of video game music, Gaijin Hunter, a hugely informative Monster Hunter content creator, and DrTangerine, who has every Monster Hunter 4 Ultimate cutscene uploaded to their channel.

There are seven juvenile monsters in Monster Hunter: Rise whose grown counterparts are nowhere to be found, and the star of the missing seven is the amphibious ice shark Zamtrios. The Frost Islands map is chock-full of Zamites with no big boss frog-shark to lead them. Zamtrios can coat itself with a layer of ice armor like Goss Harag, inflate itself for harder-hitting attacks like Tetranadon, and dive through ice floes with fin upright like the title character of a Stephen Spielberg film. What’s not to love?

Seregios is the flagship monster of Monster Hunter 4 Ultimate, and was created to be a stylish new rival to the series’ signature monster Rathalos. I like Seregios’s more nonlinear birdlike movements compared to the more direct Rathalos, and fear the Bleed status inflicted by many of its attacks. But most of all, I love the gilded wyvern’s high-sharpness golden weapons and self-sharpening armor, and would love to see those armaments make a comeback in Sunbreak.

The flagship monster of Monster Hunter: World (get ready to hear that F-word at least three more times in this list) is a gameplay wall that forces hunters to learn a monster’s tells and practice proper defense, or die trying. The intimidating spiky dragon is fast and powerful, but clearly telegraphs every attack and confers materials for crafting strong dragon-element weapons, making it a deliberate introduction to Elder Dragon hunting. I have fond memories of overcoming Nergigante in the halcyon days of 2018, and I want to see Nerg clash with the monsters of the Rampage in 2022.

The first Leviathan in Capcom’s monster taxonomy and the flagship monster of Monster Hunter Tri on Wii, Lagiacrus has struggled to make an impression in games without underwater combat (which is every Monster Hunter game other than Tri and 3 Ultimate). This electricity-wielding marine reptile is the closest thing Monster Hunter has to a Jormungandr-like sea serpent, which would make it a fabulous fit in Sunbreak’s presumed Western fantasy aesthetic. Even when limited to fighting on land, Lagi is a charming crocodilian creature with a lot of fans in the Monster Hunter community, especially among Third Fleet hunters.

A top predator Fanged Wyvern in the Rotten Vale zone of Monster Hunter: World, Odogaron’s bloodcurdling howl, hide resembling bare flesh, multiple layers of teeth and claws, and aggressiveness bordering on psychosis make it one of the most menacing monsters in World. Like Seregios, Odogaron attacks can cause bleeding, which might synergize with the blood-drinking Malzeno performs on an unsuspecting Rathalos in the Sunbreak trailer. Even better, Odogaron bears some resemblance to a traditional depiction of a Hellhound, and would be well-suited to the red moonlit night of the new castle ruins map. Until we get a proper lupine Fanged Beast in a Monster Hunter console game, Odogaron is the next best thing.

Amatsu (whose name has four extra syllables in the unlocalized Japanese) is the final story boss of the Japan-only Monster Hunter Portable 3rd for PSP, an airborne Elder Dragon that whips up torrential rains wherever it travels. Amatsu’s serpentine movements in flight and long whiskers suggest a traditional Chinese dragon silhouette, and also evoke Wind Serpent Ibushi and Thunder Serpent Narwa, the final bosses of Monster Hunter Rise‘s main story. It’s unclear if the three storm summoners separated by a full decade of games are evolutionary cousins or not, but Amatsu is certainly a cool dragon design that would look great in a quest list alongside Rise‘s mating pair of Elder Dragons.

Monster Hunter Generations, the last set of 3DS Monster Hunter games, features flagship monsters called the Fated Four, a quartet of threats wrecking havoc just outside four villages. Only one of the Fated Four (Mizutsune, a stunning bubbling Leviathan) made it into Rise, but I think it’s time to get the band back together. The electric flyer Astalos, blazing-tailed brute Glavenus, and icy-spicy pachyderm Gammoth are all fun hunts that yield cool weapons and armor in Monster Hunter Generations (and Generations Ultimate), and Sunbreak is the perfect chance to bring these unique monsters back into the fold.

The undead don’t technically exist in the Monster Hunter universe, but the closest thing to it is Monster Hunter: World‘s Vaal Hazak, an Elder Dragon that presides over the bones and blight of the Rotten Vale. Vaal Hazak rests in piles of decomposing monsters and exudes a toxic cloud of Effluvium that drains the life of any nearby hunter or monster and restores Vaal Hazak’s health. Again, there are no zombies in Monster Hunter, but the ghoulish Vaal Hazak is so suggestive of a zombie dragon that it would be an excellent complement to Malzeno, Sunbreak‘s vampire dragon. And that battle theme is such a banger that The People demand a Rise arrangement.

The back and forth between Gore Magala and the player character is so dramatic, and the fight so intense, that the surprise reveal of Shagaru Magala (a scene almost like a Pokémon evolving) is probably the most celebrated twist in the series. And the way Gore Magala’s wings drape over it like a cloak? Badass. Also, the shadowy Gore giving way to the shining Shagaru is a visual motif of a dark night breaking into dawn in and of itself. Boom. This adolescent and adult Elder Dragon duo is perfect for Sunbreak.

Ahtal-Ka is in only one Monster Hunter game presently (Monster Hunter Generations Ultimate, the last 3DS and first Switch MonHun game), but is so unique, and has a fight so perfectly suited to Rise, that I am desperate to see it make a second appearance. One new gameplay element in Monster Hunter Rise is Wirebugs: hunters can use silk shot from trained bugs to grapple-hook around the environment for fast travel and perform powerful supermoves called Silkbinds. Wirebug actions are the awesome new signature trick in Rise.

But Ahtal-Ka had them first. The massive Neopteron monster resembles a praying mantis by way of an Egyptian pharaoh, and uses hundreds of silken threads to wield powerful Dragonator lances as weapons, pull along metal mill wheels for quick dashes, and even stitch together chunks of ruined buildings and war machines to pilot a makeshift mecha. A newly-designed Ahtal-Ka boss fight pitting the player’s Wirebug skills against the golden arthropod’s arsenal of found objects could be the stuff of Monster Hunter legend. 2022 is the time for Ahtal-Ka’s renaissance, and Sunbreak is the game.

There are countless other monsters not included here that could have found their way onto other Monster Hunter fans’ own most-wanted lists. I’ve never hunted Dire Miralis, Gogmazios, Velkhana, Shara Ishvalda, and many others. I’m not a fan of Fatalis or Kirin. I think Rise already has enough late-game Blast status monsters, so Brachydios missed the cut. 4th-generation monsters comprise over half the list because I felt there was a sore lack of them in Rise, at only two (Mizutsune and Valstrax) out of forty non-Apex monsters. The last two monsters I considered for the list, essentially finishing 11th and 12th, were Deviljho and Najarala. Regardless, I hope this was an enjoyable exhibition of a few of the wyverns, aquatic life, beasts, bugs, and dragons that form the lifeblood of one of Capcom’s signature series. Happy hunting.