My Own Personal Hades 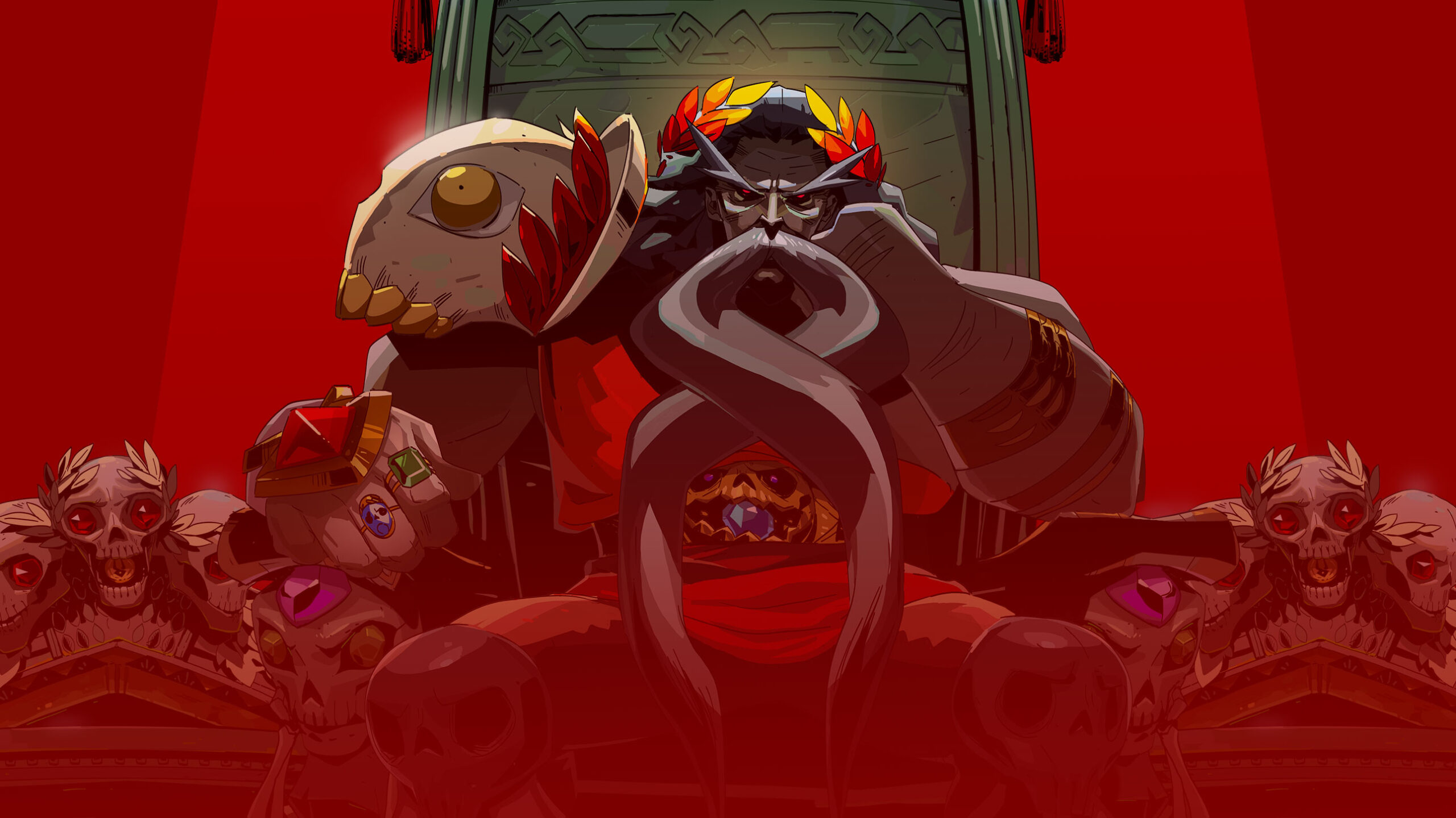 Yep. It’s patricide. Happy Father’s Day, everyone! The men of this Pantheon aren’t exactly role models, and there certainly aren’t any fatherly role models here to look up to today. Now, would I go so far as to say they’re all trash? Well, yeah. Half of them ate their kids, people! So, what are we doing here on this most honored third Sunday in June? This Father’s Day, I’d like to talk about the one exception amongst the men of this pantheon – a short king without flaw and a man whose brain is empty but heart is full: Zagreus. Hades is his story, but it managed to teach me something about myself. Perhaps it will do the same for you?

Zagreus and his father Hades are more than father and son. They are mirrors, and in that reflection I can see the progression of my relationship with my own father, as well as where that relationship might go next. In that realization, I have found a little bit of hope on a day so often marred by tension, and I want to share that feeling with you all today.

So, join Zagreus and I on the journey from hate to love to something else entirely. Let’s find some Chthonic catharsis.

Enter Hades. We are Zagreus, and with Stygian Blade in hand we lay siege to the denizens of Tartarus, ruins and ash in our wake. We are unstoppable! WE ARE — oh, we’re dead. Into the River Styx we go, I suppose

Luckily, this death is our gateway into the broader world of Hades. As Zagreus emerges from the pool of blood, we get our first glimpse of his home, and it’s strangely soothing: Corinthian columns, blood-red olive leaves, and one big old three-headed good boy. Then Hades pipes up. “Stupid boy. I told you nobody gets out of here, whether alive or dead.” This is the moment where we understand. Zagreus is escaping the Underworld for nothing more than the delicious satisfaction of proving Hades wrong. He’ll crush the furies, dismantle the Hydra, and decimate heroes of yore all for that sweet taste of “I told you so.” He’s angry, and all that matters is defeating dad. I get that, Zag. I really do.

See, I didn’t really know how to process my father’s absence as a child. No child does, but I felt the need to feel some type of way about it. Like Zagreus, I chose anger. I have to imagine that’s a common response. In my young eyes, if someone decided not to have a relationship with me, they must hate me, so I might as well hate them back. And boy did I. I hated my father. I couldn’t even remember him, but I hated him. It was an anger so potent that, even in his absence, his shadow loomed large.

Sure, it was unhealthy. More than that, though? It was exhausting. It took a while, but I eventually realized that I was devoting incredible energy to hating a man that wasn’t even around to care. I was so fixated on what was missing that I failed to celebrate what remained. I had to move on, and so did Zagreus.

Flash back to Hades and we find ourselves just steps away from the land of the living, our beloved Cerberus distracted by some tasty Satyr-sack-snacks. The only thing left standing in our way is dad, Hades himself. We fight, taking our revenge fantasy to its logical conclusion and pausing to admire the ocean in the wake of his defeat. We can finally breathe. All is right in our world.

Except, it isn’t. Zagreus stumbles upon a garden and meets Persephone, the mother he had never known and the rumor he barely believed. She isn’t what he expects, though. She’s kind, funny, and gentle. She never meant to abandon Zagreus; she never even knew he was alive. Though Zag’s time in Greece is short before the River-Styx reclaims him, the impact is lasting. Everything has changed. He must return to Persephone. With every run – every boon, every death, every satyr sack snack – the goal is no longer revenge. It’s time with mom. Hades’ overwhelming shadow shrinks with every precious moment spent in that garden because it’s no longer about him. The anger has faded. Zagreus has learned to focus on love, a growing love for his mother Persephone.

Much like Zagreus, I learned to look past my anger and truly see the person that deserved my energy: my mother. Now, it’s not like I was dismissive of her or anything, but I can’t say I celebrated her either. Thankfully, I don’t make that mistake anymore. I let people KNOW that she’s incredible. She’s the strongest person I’ve ever known. She’s hilarious. We wear matching pajamas on Christmas! Basically? She’s great.

Just as Zagreus stepped past his father and into his mother’s life, I forgot my hate in favor of loving my mom. I’m glad I did too, because she deserves it, and focusing on that love just feels better. Why bother hating someone who isn’t there when you can spend that time celebrating the people who are? It seems so simple, in hindsight. In fact, until now, I thought it was the healthiest choice Zagreus or I could have possibly made.

Finishing Hades has me questioning that. It has me thinking beyond simple love or hate. We’re at “something else entirely.”

We have defeated our father time and time again. Nine times, to be exact. The tenth time is different. He stares at the icy waters of Greece and refuses to face us. This time, this singular time, he will not try and stop us. He’s done limiting us, and he wants us to speak to Persephone. We do, and we decide to return to The Underworld together. All is right once more.

And this time, it actually is! Mom is home. Cerberus is thrilled. Hades no longer haunts Zagreus’ every thought. Zag even has a swanky new gig testing out Chthonic security. Yes, life is the best it has ever been, but it doesn’t need to stop there. Zagreus has an entire family that he has never met: aunts, uncles, and cousins that he has only known through whispers and boons. Things can be better. And, with a fair amount of nudging from Persephone, Zagreus and Hades can work together to make “better” a reality. Mind you, Zagreus hasn’t truly forgiven his father; the abuse and neglect haven’t disappeared. Instead, Zag’s mind has cleared, and he has realized that a simple relationship with his father may just be the key to something more. He doesn’t need to limit himself. We don’t need to limit ourselves.

I may not have secret aunts and uncles, but I have a brother, a half-brother. About twenty years after my mother left with me, my dad was finally ready to be a father and try again. He and his new wife decided to have a baby, and Milo was born. Unfortunately, I barely know him. I’d like to say it’s not my fault, that the real culprit is distance, or time, or a villainous father figure. It’s not. If I’m honest with myself, I didn’t make the effort. I was limiting myself. I knew that I wanted to have a relationship with Milo, but the prospect of reconnecting with my father seemed too daunting. I had spent years building up this image of what my relationship with my father must be, and Milo didn’t fit within that narrow definition.

Sitting there, the final scenes of Hades rolling across my screen, I realized that I needed to stop limiting myself. If Zagreus could forgive his father just enough to have a relationship with the rest of his family, why couldn’t I? I had to do something… so I took a deep breath and texted my dad.

So, I urge you to play Hades and reflect. We all have someone in our life that has wronged us, whose mistakes have come to shape us. Who is yours? I would never ask you to forgive them or expose yourself to additional trauma. Please, I’m not even asking you to tolerate them! I just want you to think. Are they worth your hatred? Are they worth your time? Are they worth denying yourself something more? I’m thinking no. I’m thinking I need to forgive in order to move forward. Milo deserves that much, at least.

We all deserve that.