Posted by Mike Giegerich on September 5, 2021 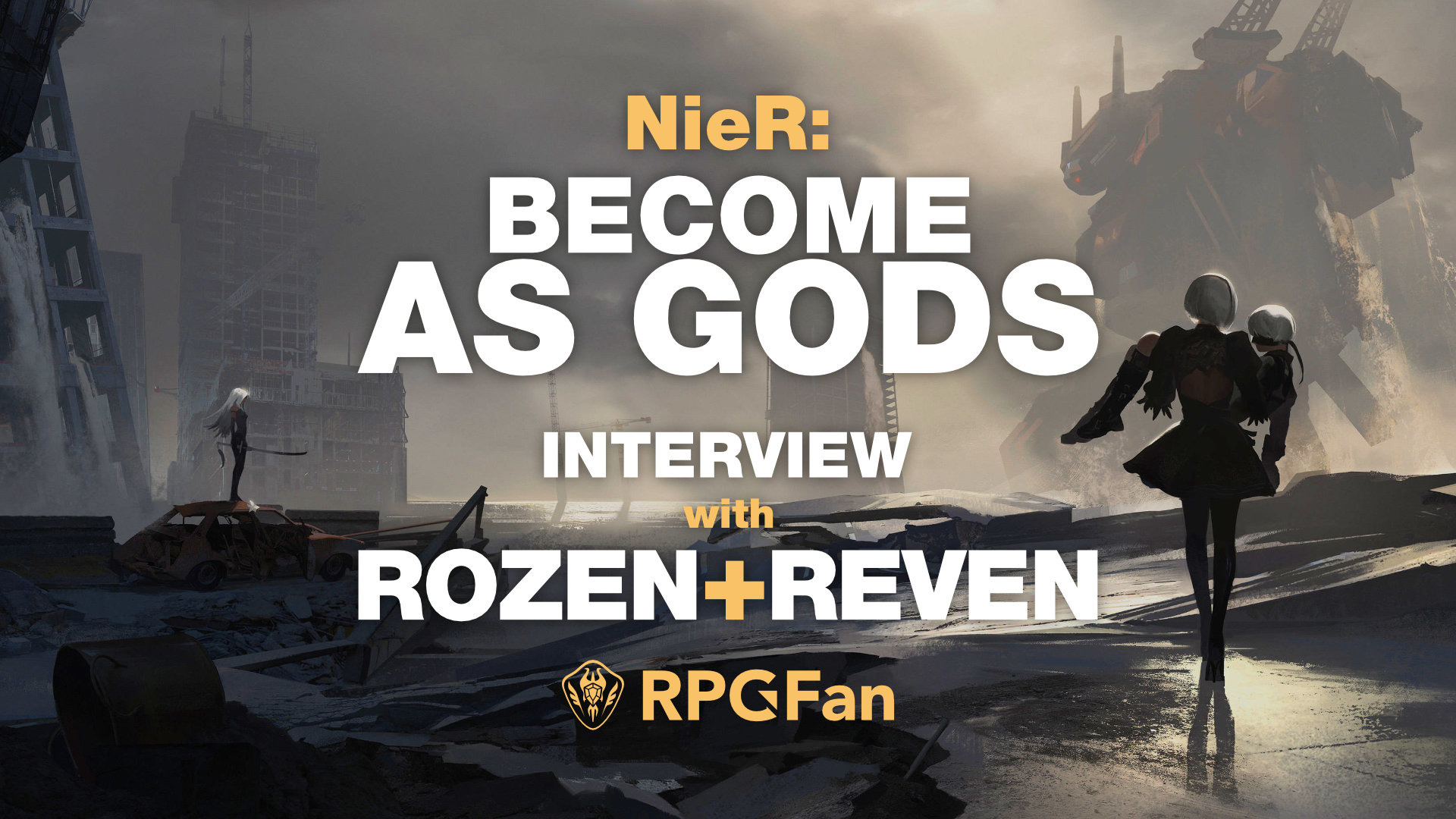 Dynamic duo ROZEN + REVEN initially entered the world of NieR: Automata on NieR: Glory to Mankind, a cover album that viewed the instant-classic soundtrack through the lens of a distinct orchestra-pop sound. Four years and multiple collaborative projects later, they’ve returned to the critically acclaimed game on NieR: Become As Gods.

Much like the Game of the YoRHa Edition, ROZEN + REVEN (along with the Sofia Session Orchestra & Choir and a list of close collaborators) have managed to make the NieR universe even more captivating with arrangements that enhance the game’s breathtaking scope. From intimate melodies to epic exhibitions, the record is meticulously crafted and finds the creators at their prime.

We spoke with ROZEN + REVEN about their approach to NieR: Automata’s Chaos language, how the gameplay affects their compositions, their personal favorite moments, and much more.

RPGFan: Did you two originally meet at Berklee? And has that shared background helped inform your creative approach?

REVEN: Yes, we met at Berklee and in a video game music choir to boot! Then in our last year we co-founded Audire Soundtrack Choir in order to branch out to all types of media music. Through that we learned how to arrange music together and discovered we had both complimentary tastes and approaches to music-making.

ROZEN: Yeah, we met at Berklee. I’d say it has definitely helped our creative approach; every student I’ve met has a special level of musicianship that takes collaboration and communication to the next level. It wasn’t any different with Reven – we’ve always connected musically at a very technical level, which speeds up the production process.

RPGFan: What initially drew you to the world of NieR: Automata? And what about its soundtrack spoke to you in particular?

REVEN: Right away I kept hearing how great the music was and decided to check it out. I think after two songs I was hooked – the style of vocals plus the care that went into the creation of the languages, the fact that there were many layers to each song that could be heard during the game, those were the things that drew me in the most.

ROZEN: Sci-fi combined with Biblical mythology and human psychology are my favorite themes in a story, and I felt NieR: Automata hit all the right spots for me. The tone and instrumentation of the music captured my attention right away, making it something that I wanted to understand more rather than trying to add to it, which made it an easy decision to want to arrange.

RPGFan: How would you describe your experience during the creation of Glory to Mankind?

REVEN: We were a little obsessed. I think we made that album in just over a month, after devouring the game. I had so much fun coming home from work and just diving into these arrangements. It was also the first time we were doing an album together as a team, which made it even more special.

ROZEN: As we were discovering the game and hearing the music, we couldn’t stop talking about the whole experience. That gave us the drive to immediately start working on the album, which originally started as a single, a double single, and evolved into an EP, and then…well, a whole album. It was that fun.

RPGFan: What made you decide to revisit NieR: Automata with Become as Gods? And how has your creative approach evolved since 2017?

REVEN: There were too many songs that we didn’t get a chance to include on Glory to Mankind but that we still wanted to try. After seeing how many people loved our first album, that really inspired us and gave us confidence that a second NieR album would be something people would enjoy too. As far as our approach, I for one was so excited to sing more of these songs knowing that our vocal production had improved – there were some moments in the first album where I look back and know we could do better, not that I’m less proud of them in any way! But I knew we could sound more polished this time.

ROZEN: NieR: Automata music became an instant classic, to the point where it’s already nostalgic to me. Similar to when I listen back to Ocarina of Time music. And there’s just so many good songs in the NieR soundtracks, I wanted to explore more. I also wanted to revisit it now that we’re both farther into our music careers, so it was very interesting to see how far we’ve come, and how much more comfortable we are with the process.

RPGFan: How do you go about singing and composing around the Chaos language? Does it provide any challenges that might not arise from a traditional soundtrack?

REVEN: For me, it’s almost easier working with fake languages because I know my pronunciation won’t really be wrong, just a different interpretation. But it was definitely tough to transcribe the lyrics! There was a lot of listening over and over and comparing with existing lyric listings online for the songs.

ROZEN: I’ve always been a huge fan of made up languages in music. It lets you focus on the emotion the melodies evoke rather than what they’re saying in reality. The only challenge was making sure that our transcriptions had plenty of pronunciation notes or guides so we wouldn’t deviate too much from the original performances.

RPGFan: You mentioned that “City Ruins (Shade)” occurs during a more dangerous area of the game than the original “City Ruins” and allows for more freedom to explore musically. How much does the gameplay affect your work?

REVEN: Our arrangements are always created as interpretations of how we experience the games, which is why we mostly arrange music from games that we’ve played or seen before. Even something as simple as changing a genre of a song conveys new emotions and experiences, and I try to be deliberate with everything I make. I don’t think there’s a wrong way to arrange something as long as there’s thought put into it.

ROZEN: In this particular case, the “Shade” version was a bit more dramatic and full, which helped me arrange it in my own style.

RPGFan: How did you connect with the Sofia Session Orchestra & Choir? And how have they helped realize your vision across albums?

REVEN: I enjoy having real players perform my music because they can add so much expression to the sound. The team at Four For Music in Sofia are so easy to work with and very consistent with their sound quality – it is very fun to write something knowing how great it will sound once recorded!

ROZEN: I reached out to them back when I was working on Children of Termina and I’ve always found them to be extremely accessible and convenient to work with. They’re an excellent team that have always been open to try things with me, and make it an enjoyable experience, from the comfort of my own home.

RPGFan: What’s your favorite moment during NieR: Automata? And can you see yourselves revisiting the NieR universe again?

REVEN: So hard to narrow it down! I would say my favorites are the final bit of the Pascal arc and the scene after the last fight of Ending B. I’d love to do some music from the previous NieR games, but we have to finish them first!

ROZEN: The first few endings blew my mind and they kept getting more insane. I was not prepared for what was happening. I think my favorite moment was thinking back to the first ending after all the knowledge of the rest of the paths. There’s so much more I’d like to cover from the NieR universe, including Kainé, The Tower, Grandma (again!), Possessed by Disease, and many more from the other games.

RPGFan: Is there anything else you’d like to add?

REVEN: Just a thank you to RPGFan, and to everyone that’s taken time to listen, write about, and share our albums! It’s hard to believe other people enjoy the specific music we make, but I’m very glad to be making it!

ROZEN: I really appreciate the opportunity to talk about the things that inspired this album and your support throughout the years. It’s so great to hear there’s people willing to listen to our work and join us in spreading the love for a wonderful series.

RPGFan thanks ROZEN + REVEN for taking the time to discuss their new album, NieR: Become as Gods, which is now available to stream on all platforms (and pre-order physically via Bandcamp).