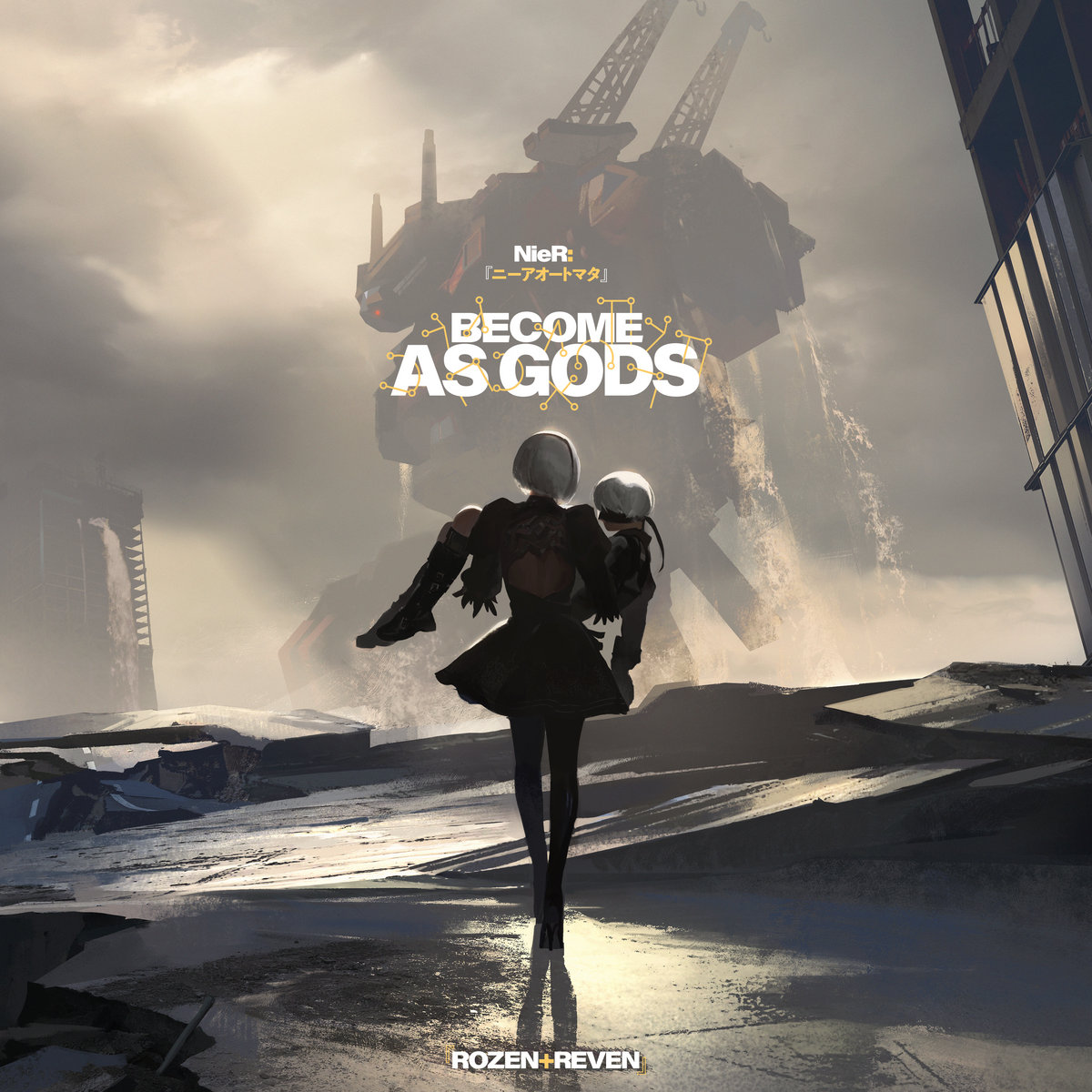 Square Enix Music, rather appropriately in my opinion, built up a powerful musical edifice for the NieR franchise, especially since the 2017 breakout hit NieR: Automata arrived. Alongside dozens of live concert performances—at least four of which have retail Blu-ray concert recordings—there have been about 20 other official NieR music publications released by Square Enix.

And then, there are the officially licensed albums from all around the globe. As with any other franchise, there may be plenty of mediocre arrangements among newcomers or those ambitious but lacking a budget to see their plans through. Yet, there is also that exquisite layer of licensed albums from incredibly talented individuals who are also clearly fans of the source material. We saw two such individuals in the pairing of ROZEN and REVEN in their 2017 arranged album, NieR: Glory to Mankind. These two incredible musicians have been producing solid arranged music for years now, with great arranged albums covering such franchises as Zelda, Kingdom Hearts, and Fire Emblem. And yet, in the year we saw a remake to the first NieR with NieR Replicant ver.1.22474487139…, did ROZEN and REVEN take on that material?

In a move so bold that I have to applaud it—and, after listening, I suspect you will do the same—the ROZEN+REVEN duo decided to release a direct follow-up album to Glory to Mankind. This new album, Become as Gods, features music exclusively from NieR: Automata. While Glory to Mankind was produced swiftly on the heels of Automata and its success, Become as Gods has been in the works for over a year. And, while much of it was worked on in the isolated world of early COVID quarantine, arranger ROZEN saw fit to work with the Sofia Session Orchestra & Choir (as in Sofia, the capital of Bulgaria). The forty-plus team of performers brought what was originally a synthetic score to life in a powerful way. With talented individuals including Eric Buchholz and David Peacock backing ROZEN and REVEN on the heavy-duty orchestration, magical things happened.

The most magical thing to happen, however, comes in the form of track five, “Forest Kingdom.” This is the only track I’m going to speak about in-depth, and I’m inspired to do so after watching the recent livestream listening party that ROZEN hosted. Here, I learned that ROZEN actually considered this track one of his least favorites from Automata until he began to do the work of arranging it for himself. During the creative process, he found so much to develop, he ended up with four distinct parts. First, there was the obvious orchestral work to be done. Next, instead of the traditional western European choir SATB setup, ROZEN brought in an ethnic Bulgarian choir (for the uninitiated, listen to Xenogears CREID as an example of Bulgarian choir used in VGM). This fit not only because ROZEN was working with native Bulgarian singers, but because of how he chose to arrange the remainder of the track. The other exciting pieces came in the form of ambient forest sounds and pitched percussion (marimba, vibraphone, etc.). The “lifelike” way in which all this comes together is immediately palpable. One listen, and you’ll be sucked in. During the listening party, ROZEN stated about this track, and at least one other, that he is tempted to release the four musical layers separately so music lovers can hear each component individually, because each is that enjoyable. Of course, they are even better when layered, but they can be appreciated just as well on their own.

I would be remiss if I failed to mention just how critical REVEN is in all of this. Previously, I’d only recognized her for her vocal work. And, to be sure, she is an incredible vocalist. Her voice stands out so well on this album too. From “Pascal” and “Memories of Dust” to “City Ruins (Shade),” she has become a master of Chaos language in her own right. But she is also a top-tier arranger. And while the credits for this album do not cite which tracks are fully ROZEN or fully REVEN—presumably because they each had a hand in every song—her ability to bring a piece of already solid original composition to new heights is apparent throughout.

Thematically, the album doesn’t dare to go too far beyond the storytelling of NieR: Automata itself. ROZEN admitted to some mecha and kaiju inspiration, even having hidden some “easter egg” music from Shiro Sagisu in the bookended “God Have Mercy” tracks. However, the soundscape is appropriately faithful to the source material without being so vanilla that one is just as well off listening to the Automata OST. Granted, the NieR: Automata OST remains one of the best out there. To me, that’s what makes this album all the more impressive. How does anyone go for high-production and compete with something already so good? Answer: pick up the missing pieces. And, when in doubt, break out that Bulgarian choir. If you thought it was good on “Forest Kingdom,” be sure to listen to the rest of the album. Things get bonkers during “The Sound of the End.”

NieR: Become as Gods is already available digitally, with CD and Vinyl versions available for order as well (at the time of this writing, the printing of the physical products is only now beginning to take place). NieR fans should take note. Fans of solid modern orchestral work, and especially choir work, should take note. And perhaps most importantly, the MONACA composition team should take note. It’s one thing to leave an impression on the gamers. It’s another altogether to inspire arrangers and performers of this caliber to do not one, but two ridiculously well-crafted tribute albums for a single game.

Be sure to also read our interview with ROZEN and REVEN about NieR: Become as Gods.