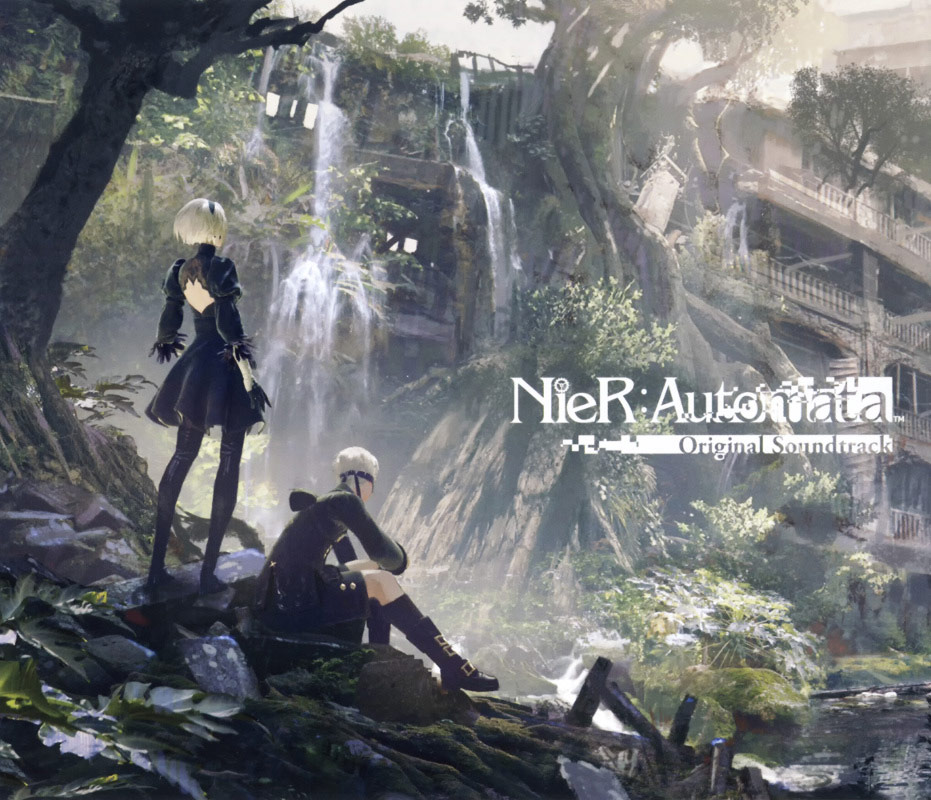 How do I start a review for such a great soundtrack? It is a difficult task, but certainly not as difficult as attempting to surpass the quality of NieR: Automata‘s predecessor. Which, somehow, Keiichi Okabe and the rest of MONACA managed to do.

Maybe that’s not quite right. When I go back and listen to the NieR OST, I hear styles and sounds that simply didn’t make it into Automata. For example, “Temple of Drifting Sands.” There is nothing even remotely like that song on Automata.

On the other hand, Automata crafts a sci-fi soundscape appropriate for the game, and it does so masterfully… in a way that, simply put, you won’t find on the first NieR. Examples include both versions of “Significance” and “Fortress of Lies.”

And so, when it comes to deciding which soundtrack is better, I choose to throw my hands in the air. They’re both perfectly, wonderfully great, and they are much like the traditional Venn Diagram: overlapping, but not entirely, so each has its own distinctions.

Having made that sweeping generalization, I am now left to wonder: who is reading this review? Are you someone who enjoyed the game and is considering a soundtrack purchase? Are you already entrenched in the fanbase, and checking to see if my opinion matches yours? Perhaps you haven’t touched Automata at all, but you lived the first NieR OST and you want to know if the sequel’s soundtrack is of equal quality.

I’m going to touch on what I see as important moments in this 3.5 hour OST. In some ways, of course, it is all important. Every second makes up the totality. But there are parts that I believe are especially worthy of interest.

Let’s start at the end, with “Weight of the World.” The first NieR‘s end theme song, “Ashes of Dreams,” had four versions, all sung by Emi Evans. They were broken into four different languages: all real languages, mind you. Things change with “Weight of the World,” and, in my opinion, for the better. The English version is performed by newcomer J’Nique Nicole. Not only did she sing the English version, she actually wrote the lyrics! Each version’s lyrics differ significantly, and J’Nique’s version is probably the most hopeful of the bunch (although as I’ll explain soon, we cannot be sure what Emi’s version actually says…).

J’Nique sings of standing up against all odds, of finding redemption even if there’s a God placing burdens and punishments upon her. In contrast, the Japanese version “Kowaretasekainouta” (translated, “Song for a Broken World”) is painfully pessimistic. The vocalist, Marina Kawano, is crying (to the point of blubbering) during the last minute of the performance. Given the content, it’s no wonder: “We shout in our worthlessness / the violated love this world,” and “My voice doesn’t get through / this is my curse / the depth of the sins I committed.” Those are rough translations, but it’s safe to say that these lyrics, penned by series mastermind Yoko Taro, are much darker than what J’Nique had to say.

The third version is the “Nouveau – FR Version.” Nouveau FR means “New French,” and it’s a fictional language. It is not Emi’s typical Chaos language — it’s heavy on the French phonemes. But it is, nonetheless, a pseudo-language, so we have no way of knowing what was in Emi’s mind when she wrote this piece. Perhaps a middle between J’Nique’s optimism and Yoko Taro’s rampant pessimism? In any case, what I can say is that if the deep, soulful voice of J’Nique Nicole isn’t for you, this will almost certainly become your favorite version. Personally, I love all versions equally, but for different reasons. One of the best things about J’Nique’s English version is that the lyrics aren’t too schmaltzy or off-topic from the game, its characters, and their relationships. The same cannot be said for most VGM English vocal tracks.

It helps that I like all three versions, because there’s a fourth version, “The End of YoRHa,” that combines the previous three versions and adds a chiptuned introduction and a large chorus (made up of the NieR: Automata development staff!) to fill out the sound of this beautiful medley. The power and meaning of the piece grows exponentially for the listener who has also played the game to its true end. Do yourself a favor: if you want this soundtrack, make sure to play this game at some point, and preferably soon! There is no question that the context of the game makes this music better, just as the music made the experience of the game better.

If that ending vocal track in all its forms does not sate your thirst for in-game vocals, fret not. While the ratio of vocal-to-instrumental is not the insane 8:2 that it was in NieR, the Automata OST still has plenty of vocals to go around. Emi sings in her beautiful Chaos language on a number of songs, including “Amusement Park,” “Peaceful Sleep,” “A Beautiful Song” (with J’Nique joining in on the Chaos!), and “Faltering Prayer – Dawn Breeze” — that’s just one vocalist, and just on disc one! Other vocalists, including Nami Nakagawa, Marina Kawano, J’Nique, and whole male-only, female-only, and combined choirs can be heard throughout the soundtrack. We hear it in surprising arrangements like the return of NieR‘s “Grandma” melody in “Grandma – Destruction” — now a raucous, intense swell of vocals and instruments!

Speaking of re-used music, there is plenty here for NieR fans to celebrate. On the lighthearted side, there’s “Emil’s Shop.” For a far more intense and epic form of the song, we have “Emil – Despair” on disc three. The classic boss battle piece “The Dark Colossus Destroys All” returns in a variation entitled “Dark Colossus – Kaiju.” And who could forget one of the most important tracks of all? Devola and Popola return with “Song of the Ancients – Atonement.” Now, composer/arranger Keiichi Okabe took the easy route with this piece by lifting all of the vocals from “Song of the Ancients – Fate” and placing them into a new set of instrumentation: a surprisingly upbeat string ensemble. The familiar vocals are a help, though, not a hindrance, especially in the song’s use in-game. You won’t forget it.

Automata’s soundtrack also sports some quirky tunes that tend to get stuck in one’s head. “Pascal,” “Forest Kingdom,” and “Fortress of Lies” all tread into strange new territory. On the other hand, there are pieces where the MONACA sound team manage to channel soundscape-styles of other popular VGM veterans. For example, the excellent “Copied City” with its piano-centric fugue sounds like some kind of Shimomura-Sakimoto love child: honestly, I hear equal parts Legend of Mana and Vagrant Story in this piece. And I take no issue with that! I love it!

I think that is everything I should explore as part of this review. If you want to explore the rest, I would urge you to do so by playing the game and/or buying the soundtrack. If you’re okay with digital-only, an iTunes purchase for a mere $15.99 (at time of review) is a steal for 3.5 hours of some of the most excellent game music on the market. For importers, the physical package is great, and if you can snag a first-print package, you’ll get your hands on the “HACKING TRACKS” bonus disc. Don’t do this for me, dear reader. Do it for yourself. Vote with your dollar (which increases the likelihood that more quality games and soundtracks from these individuals will be produced!), and gain access to 213 minutes of musical euphoria.