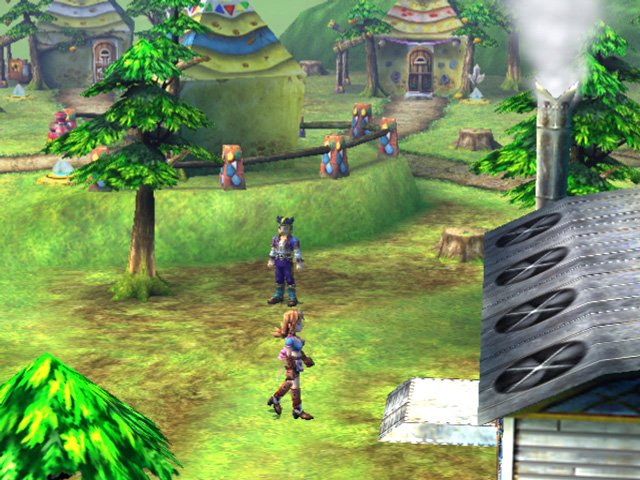 Noriyuki Iwadare is best known by most game fans in the U.S. for the musical work he’s done on the now classic Lunar, and classic in the making, Grandia series. However, his resume is much more extensive and encompasses roughly thirty different game soundtrack scores and arrangments, along with music for TV, stage musicals, amusement park attractions, and more. Yet, much to our excitement, Mr. Iwadare was kind enough to take time out of his very busy schedule to talk with RPGFan about his music, inspirations, and most recent work, Grandia Xtreme.

RPGFan: First, who would you say your biggest musical influences are? Do you have any particular favorite composers?

Iwadare: Among classical composers, I particularly love Debussy, Ravel and Mahler. However, I am influenced by all those who create music.

RPGFan: What is your favorite musical style?

Iwadare: I love all kinds of music (smiles). I like funk a lot. It’s really cool, but I’m no good at writing it. I also like quiet, elegant music, and folk-style music.

RPGFan: Which of all your soundtrack albums are you most pleased with, and why?

Iwadare: I’m happy with all my albums, but if I had to choose, I’d say The Best of Grandia and Vent ~ Grandia. The Best of Grandia was the first time I was able to record music for a game with a full orchestra, and The Best of Grandia has a lot of those cues, plus it’s a collection of my personal favorite tracks, so I’m very fond of it. Vent was a more mature album that I created with my favorite musicians in a very harmonious atmosphere. I can still feel that relaxed atmosphere when I listen to it now, so it’s particularly appealing to me.

RPGFan: What type of theme, such as battle, dungeon, or town, do you feel you excel at writing?

Iwadare: Whatever the scene, I feel I have to interpret or supplement the feelings of the hero or player at the time. So, I’d say emotional music is my strong suit. A single town will have to sound different for happy and sad situations, otherwise you’ll notice the incompatibility.

RPGFan: In general, when do you begin writing music for a game? While it’s still in planning stages, or after programming has begun?

Iwadare: I begin composing when the scenario or plot is finished. Games go through tons of changes during production, so I can’t compose until the game’s direction has solidified to a certain degree. However, there are times when a member of the production team, say the director, has a certain image in mind, and I come up with the theme music based just on that image. Lunar Eternal Blue was an example of that.

RPGFan: What’s the most satisfying thing for you about composing music?

Iwadare: I’m very happy when I can express the images in my head musically. And I’m even happier when someone takes a liking to that music. That’s the most satisfying feeling.

RPGFan: Does it surprise you to have fans outside of Japan?

Iwadare: The fact that my Japanese music can cross over borders, generations, and nationalities, and affect people is truly surprising to me, but also extremely gratifying. It makes you realize music really is the common language of the world.

RPGFan: What are your hobbies outside of music?

Iwadare: I love watching movies and reading. I also like skiing. I don’t have any specific hobby really, I’m interested in everything.

RPGFan: How long did it take to compose the music for Grandia Xtreme?

Iwadare: I don’t remember exactly, but it was probably about half a year.

RPGFan: How difficult was it compared to the other Grandia games?

Iwadare: I was perplexed at first, since I’m not too good at militaristic material, but after I realized that the game is still Grandia, after all, things went smoothly.

RPGFan: What do you feel is your biggest accomplishment in this score?

Iwadare: I wanted to make the opening theme a song of support [rooter’s song] for everyone who heard it, and I think that turned out really well. Also, the ending theme and Quan Li’s theme use the same melodic motif, however in Quan Li’s theme, the sharp is omitted. In the game, it makes it seem like a “sound bit” is missing, but the reason why one of the emotions is missing is because I tried to express musically the moment where the world is leaning towards destruction. Causing pain and spilling blood in the name of a Holy War is misguided. Nothing emerges from destruction. And so I think being given the chance to make people contemplate that is what I’m most proud of.

RPGFan: Was there a particular overall theme or emotion you tried to express?

Iwadare: The theme this time was friendship. I tried to imbue the opening theme with a feeling of camaraderie. In the ending theme, that sense of friendship evolves into a great love, one of mankind.

RPGFan: Since Grandia Xtreme is the series’ first entry on PlayStation2, did you find it easier to work with than PS1? Does PS2 still have frustrating limitations?

Iwadare: The Grandia series uses looped streaming sound. Because of this, there was almost no change with the way I’ve been working so far, so my music production method is very stable. We use a program called ADX on PS2, which allows for multiple sound streams and uninterrupted looping of music. It became very easy to recreate my images, so I’m very satisfied with it. But of course, I have many new ideas and always look to challenge myself.

RPGFan: Lastly, can you tell us anything about your next project?

Iwadare: I’m working on a number of games at the moment, but as they’re all still in planning or production, I’m afraid I can’t announce them yet. Next year or the year after, something everyone’s been looking forward to will come out, so please wait until then. This January, the HAY Dance Company, for which I serve as musical director, will be doing a public performance. They present a wonderful combination of dancing and songs. Also, in March, an original album I made with Kaori Kawasumi (the Grandia II theme song vocalist), called “Ingmar -for the beginning-” will go on sale worldwide via the Internet. It’s a soundtrack for the imagination, on the theme of reincarnation and love transcending time. The overseas version will also include liner notes in English. It’s a great work, so please listen to it.

For those who are interested in Mr. Iwadare’s most recent project, “Ingmar -for the beginning-” it will be available for sale to international sellers through cocoebiz.com in March.

All of us at RPGFan would like to thank Mr. Iwadare for taking the time to answer these questions, and James McCawley for his translation work. Also, if you’re interested in reading more about Mr. Iwadare, check out his official site, which offers an English version.