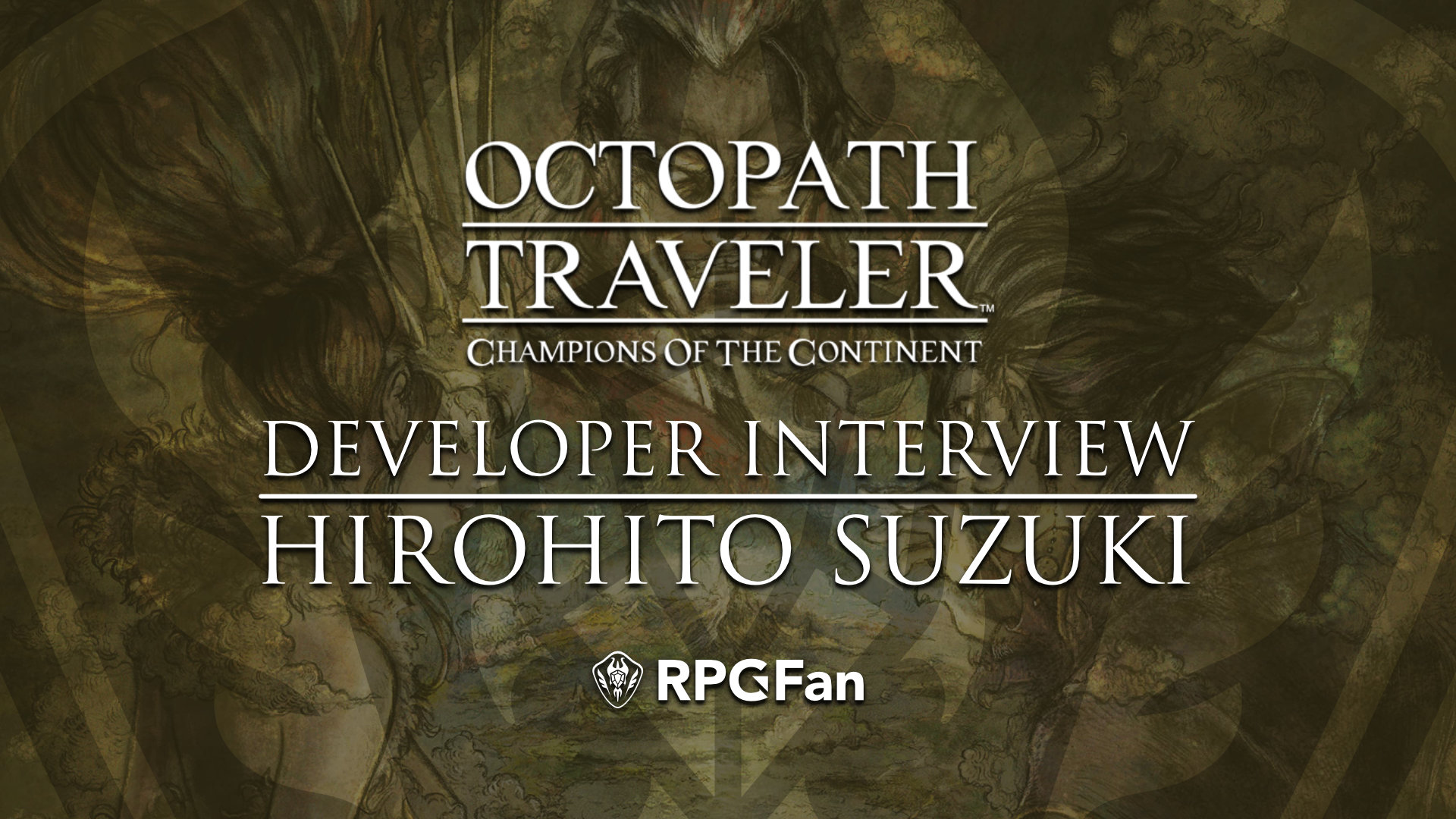 This will either be a difficult fact to visualise or a painful memory to recall, but the Nintendo Switch suffered a severe drought of RPGs for a good while after it launched. While we have been blessed by many solid releases in the years since, Octopath Traveler was one of the first must-have RPG exclusives (at the time) for the system. Its influence on the genre is undeniable, ushering in a resurgence of retro-styled RPGs of yore while also raising the standard for pixel-style graphics.

It’s been just over four years since its initial release, and now we finally have a second entry in the Octopath franchise. Champions of the Continent is an all-new mobile title, and while mobile games may make some of our readers flinch, the development team have a very honest vision for their game. We have had the pleasure of speaking with Champions of the Continent‘s Global Producer, Hirohito Suzuki, who has kindly provided us with an in-depth look at the game’s development process. Begin!

RPGFan: Hello, Team Octopath! We’re very excited to speak with you. To begin with, can you tell us what core features or concepts from the original Octopath Traveler will be returning in Champions of the Continent?

Suzuki: Hello, I’m Hirohito Suzuki, producer of OCTOPATH TRAVELER: Champions of the Continent. Thank you for this opportunity!

This project began with the desire to bring the OCTOPATH TRAVELER series, loved by many players, to an even wider audience. Therefore, the following concepts that make up OCTOPATH TRAVELER have been incorporated into Champions of the Continent in their entirety:

We hope you’ll enjoy this single-player RPG experience that can be played on mobile devices.

RPGFan: Octopath Traveler had a very clear storytelling structure, with each of its characters having their own path and chapters. Champions of the Continent looks to have a much larger cast; will it take a similar approach with its narrative?

Suzuki: The story’s central theme is a dark tale of fighting bosses who have mastered their influence on the world in terms of “wealth, power, and fame.” Players can choose which storyline they want to pursue first and can also choose to advance the other stories at any point, so it may be similar to the first game in that respect.

Of course, there are also numerous “Traveler Stories” that tell the tale of the main characters just like in the first title, so if you become weary of the dark storyline, I recommend players dive into them.

RPGFan: Is Champions of the Continent directly connected to Octopath Traveler, either in its world setting or story?

Suzuki: This game depicts the events that took place a few years before the first OCTOPATH TRAVELER. As such, the same characters and towns exist, and players might get a better sense of things like, “What were these characters thinking about a few years back?”

Some of the characters from the first game appear as protagonists in this one, so please be on the lookout for them.

RPGFan: Fans of Octopath Traveler’s art style will be very happy to see its faithful return in Champions of the Continent. From a design perspective, what inspiration did you take from the established Octopath Traveler lore to create so many new characters and locations?

For example, Flamesgrace has a solemn cathedral central to the Order of the Sacred Flame, but the town of Emberglow, which appears in this game, is of a different coloration while the design remains extremely conscious of Flamesgrace. This is because the “Master of Power” who rules their land has their own sense of self-expression.  We encourage you to play through the game and experience how the locations and cultures differ from the first title.

RPGFan: I was delighted to play an early build of Champions of the Continent, especially because it didn’t play like a diluted version of its console counterpart. For example, the movement system felt very intuitive to me. Can you tell us about the process of designing the game for mobile devices?

Suzuki: Thank you so much for the kind words! As mentioned in the first question, this title was created to deliver OCTOPATH TRAVELER to as many people as possible. From this perspective, we created a free-to-play format for mobile platforms, which currently have the largest player base. However, as for the gaming experience, we are firmly committed to delivering a true OCTOPATH TRAVELER game made for consoles.

One of the most difficult parts of creating an RPG experience on a mobile device was the movement controls you mentioned. To achieve both a sense of freedom of movement and intuitive operation, we adopted a semi-automatic input system that keeps players moving straight forward as long as a path stretches ahead of them. The eight-party member battle system is also a result of our efforts to create speedy battle developments unique to mobile devices while finding opportunities for a large number of characters to play an active role.

RPGFan: I’m looking forward to learning how the soundtrack for Champions of the Continent helps establish the game’s identity in the Octopath franchise; what are some of the key themes that the composer, Yasunori Nishiki, hopes to express through his music?

Suzuki: Whereas the previous title was the story of individual travelers, for this title, we requested the composition of a tale of evil that could potentially shake the world. For example, we had the theme music composed to start with a heavy and strong sound to appeal not to the lightness of the journey but to the gravity of the story that is about to begin. We hope you look forward to Nishiki-san’s songs, as many of them can only be heard through this game!

RPGFan: Thank you once again for joining us! With Champions of the Continent‘s global launch having just kicked off, are there any parting words you’d like to share with our readers?

Suzuki: Thank you very much for your patience!

We were committed to releasing an authentic OCTOPATH TRAVELER series entry for mobile platforms with this title and were determined to deliver a solid RPG experience. We’re confident that we’ll be able to offer a more customized and scaled-up version of OCTOPATH TRAVELER. It will feature the same “choose your own adventure” style story, path actions, and eight-party member battles that were well received and have evolved for Champions of the Continent. We hope you enjoy it!

RPGFan would like to thank Hirohito Suzuki for collaborating with us on this interview, and for the wonderfully detailed answers he provided. We wish him and the team every success with Champions of the Continent‘s continued development! You can download the game for free from the App Store for iOS users or Play Store for Android users, and for further reading check out our Closed Beta Impressions.