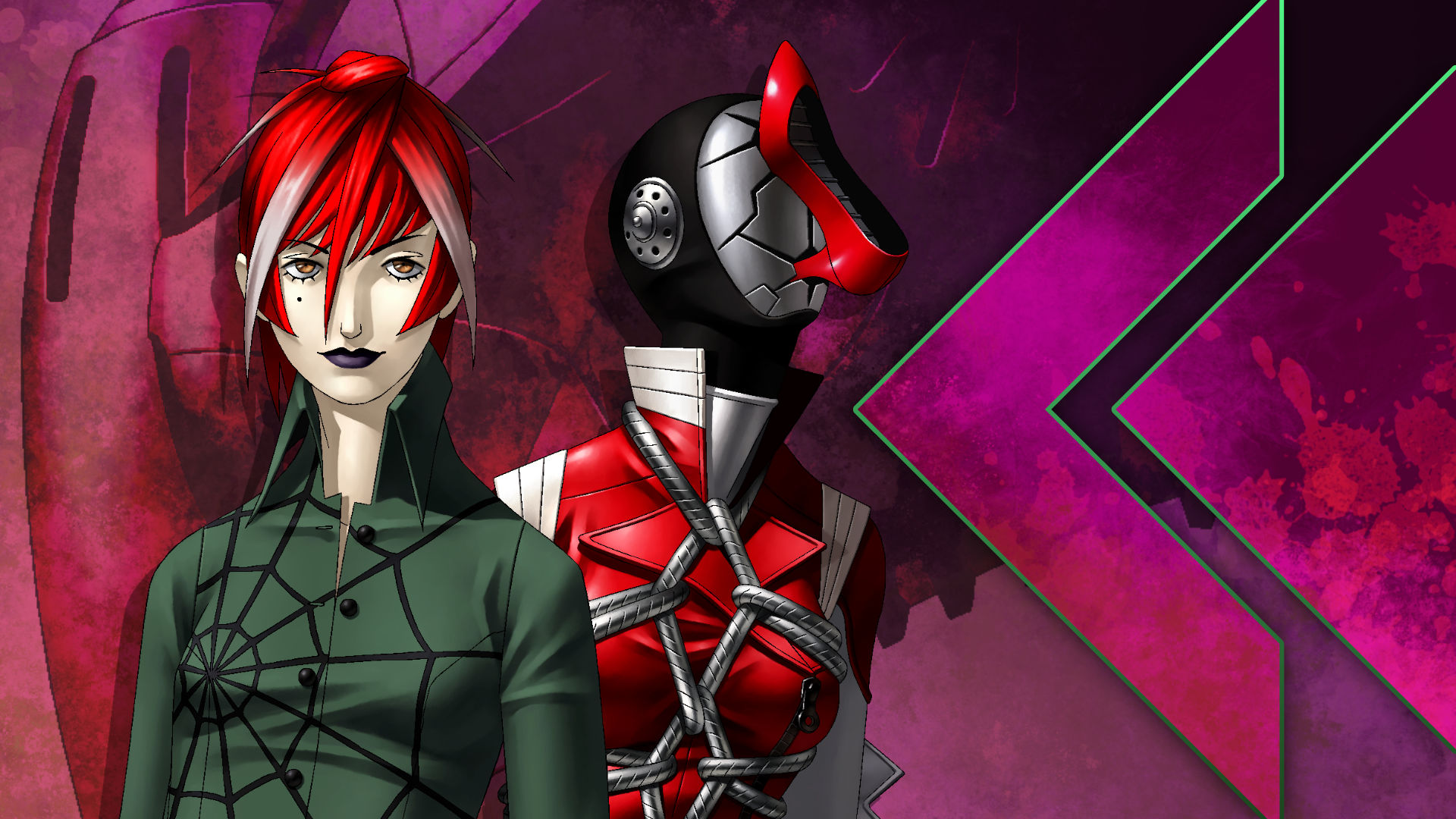 There was no way I wasn’t going to play Eternal Punishment just over a year after beating Innocent Sin. The cliffhanger ending, the exhilarating stakes, and wild events left me desperate to see what would happen to Tatsuya Suou and Maya Amano in this alternate world. And while I leave Eternal Punishment a bit shy of my glowing praise for the story of the first of the duology, it still makes me feel a particular way that no other games have made me feel, especially towards the end.

Eternal Punishment doesn’t throw a real-life dictator at you as a guise for the evil within humanity’s hearts. It doesn’t place you in the shoes of teenagers who cause a traumatic event that kicks off the end of the world. Instead, it’s more mature in tone and subtler with details. Characters like Baofu and Ulala hide parts of their personality and identity from each other, rather than their trauma masking it from themselves. Others like Katsuya experience growth in less-obvious ways. But something still always feels off in a different sense. Similar disasters and events happen that mirror the previous game, and some things have changed location or importance. Even with the improved combat, easier dungeons, and slightly simpler demon negotiation, it felt less exciting, and I often asked for more.

And then, during the final third, it clicked. The centre of this game is Tatsuya, his sin, and the punishment he must endure. Tatsuya and the rest of the party’s debates around adulthood and responsibility felt realistic, if a little troubling. And as Baofu, Ulala, and Katsuya confront their own inner demons, the game deftly demonstrates just how well it deals with self-acceptance, even in adulthood, once again. And next to Tatsuya stands Maya, who suffers from being mute in this game, but her shining positivity cuts through the illusions and evil in Eternal Punishment to allow both her and Tatsuya to realise their true selves.

Though the mirror’s reflection is ultimately weaker in this case, Eternal Punishment still left me dazzled. Fortunes, arcana, and archetypes all still line up well, and there are less bombastic events than Innocent Sin, but the opposite side of the coin shines brighter than most. There’s nothing like the Persona 2 duology, and at this rate, I don’t think there ever will be again, which is a crying shame. The atmosphere, the attention to detail, the feel of Sumaru City, the way the city and NPCs change and evolve, and how the games handle their characters and their trauma (for the most part) is unmatched. I’m not sure I’ll stop thinking about tarot, arcana, moons, mirrors, mothers, or fathers for a while, which makes Persona 2 my favourite “game” in the series.

Persona 2: Eternal Punishment‘s very existence is unique amongst Japanese RPGs. It’s a direct sequel that recreates the events of its predecessor, but mostly starring NPCs from its predecessor. It contrasts the freedom of youth with the responsibilities of adulthood by placing an undue world-saving burden on a teenager, and stars four adults who have been treated unfairly by the system. Oh, and it’s also about the power of rumors and belief systems being made into reality, but this time with 100% less Adolf Hitler.

The above descriptions seem overwrought or just crazy if you haven’t played either of the Persona 2s (it’s complicated), but both games are compelling for their highbrow psychological concepts and for being rock-solid JRPGs. The modern setting compounded by demon negotiation, tarot card collecting, and magic spell fusion makes it a JRPG only comparable to other Persona and Shin Megami Tensei games; Eternal Punishment exceeds nearly all of them in storytelling and characters.

I’m ashamed to admit that I didn’t finish Persona 2: Eternal Punishment in time for our final podcast recording (my game clock was at ~35 hours, so I was probably around the 3/4 mark). I blame poor time management and the frustration factor of the Undersea Ruins dungeon. But one frustrating dungeon doesn’t ruin the experience. Persona 2: Eternal Punishment is a special video game, and the Persona 2 duology might be the best narrative that Atlus has ever written.

At the time of writing these Final Thoughts, I have just come home from a party celebrating my 30th birthday. I am without a doubt, unequivocally and for better or for worse, an adult. No one gave me a manual or imparted any divine wisdom when the clock struck twelve. When you are a child you look at the adults around you and you think that you’re going to reach a point where you are going to understand your purpose in life and the road will be clear before you.

In this little world of JRPGs it can certainly seem that way. You will defeat the big baddie by the venerable age of 16, cement your life long friends and romantic partners and live happily ever after. In real life, I’m sad to say that isn’t the case. In fact, in many ways I feel like my path has never been more uncertain.

So, enter Persona 2: Eternal Punishment, with its cast of lost and damaged adults, living their imperfect lives and trying to find their way through this chaos, just like me. It was refreshing. I saw little bits of myself in each of these characters and it was just nice to see the media I most consume acknowledge it.

Being a grown up is kinda hard.

In Innocent Sin our young teenage cast was fighting for a chance to live their life without the pressure of living up to expectations set by the grown ups in their lives, while in Eternal Punishment we are following a group of adults who don’t have any hands left to guide them, no mentors to keep them right, and no overbearing parents to give them something to rebel against. Free birds, but lonely ones, too.

By the end of the game, however, the cast find hope and it didn’t come from without. It came from themselves and their willingness to let go of the pasts that held them back from happiness.

In the words of Ulala: “I was wrong to try to find myself. You have to make yourself. I’m nowhere to be found. It’s me who decides what’s going to happen!”

That’s not to sound negative because it’s actually the point. After all, adulthood, in many ways, is a shadow of our adolescence — quieter, reflective, hopefully with a more external focus. As adults, memories of our teenage years linger in our minds giving us perspective to understand the sins of youth. It is our responsibility to help young people carry the weight of their own sins.

Eternal Punishment addresses this very issue. I’ve said this before, but I’m a high school teacher, and early in my career, it was easy to see the teenagers I encountered daily as something akin to adults. Spoiler alert: most of them aren’t. Their passion and intensity makes them delightful to teach, but similarly to Innocent Sin‘s cast, they make mistakes. Sometimes huge mistakes. Sometimes, as in Maya’s case, those mistakes hurt me. Like Ulala says, it’s down to me to choose who I’m going to be in those situations, and what Eternal Punishment asserts is that it’s our responsibility as adults to help them rather than make them take on their punishments alone. It is our responsibility to make sacrifices, like Maya does. We may not be able to wash clean their sins, as happens here, but we can at least help them. I think that’s a lovely and significant message in the face of Innocent Sin‘s bombast and insanity.

Still, the subtlety of the message came at a cost for me: I just wasn’t as invested in the story this time around. I understood and appreciated what the game was going for, but the cast — while still excellent — didn’t connect with me like Innocent Sin‘s. I understood why I was running through the same dungeons again, and they were a little less painful a second time, but it just felt less creative, less surprising, and less emotional on the whole. The fact that demon negotiation and combat felt a little more clunky didn’t help either.

Nonetheless, Persona 2, as a whole, is leagues ahead of the later entries in the series. Sure, it lacks the flash and glitz of Persona 5 in particular, and they’re certainly not as fun to play, but it handles its ideas about identity and what makes us whole with a maturity and honesty that few games can muster.