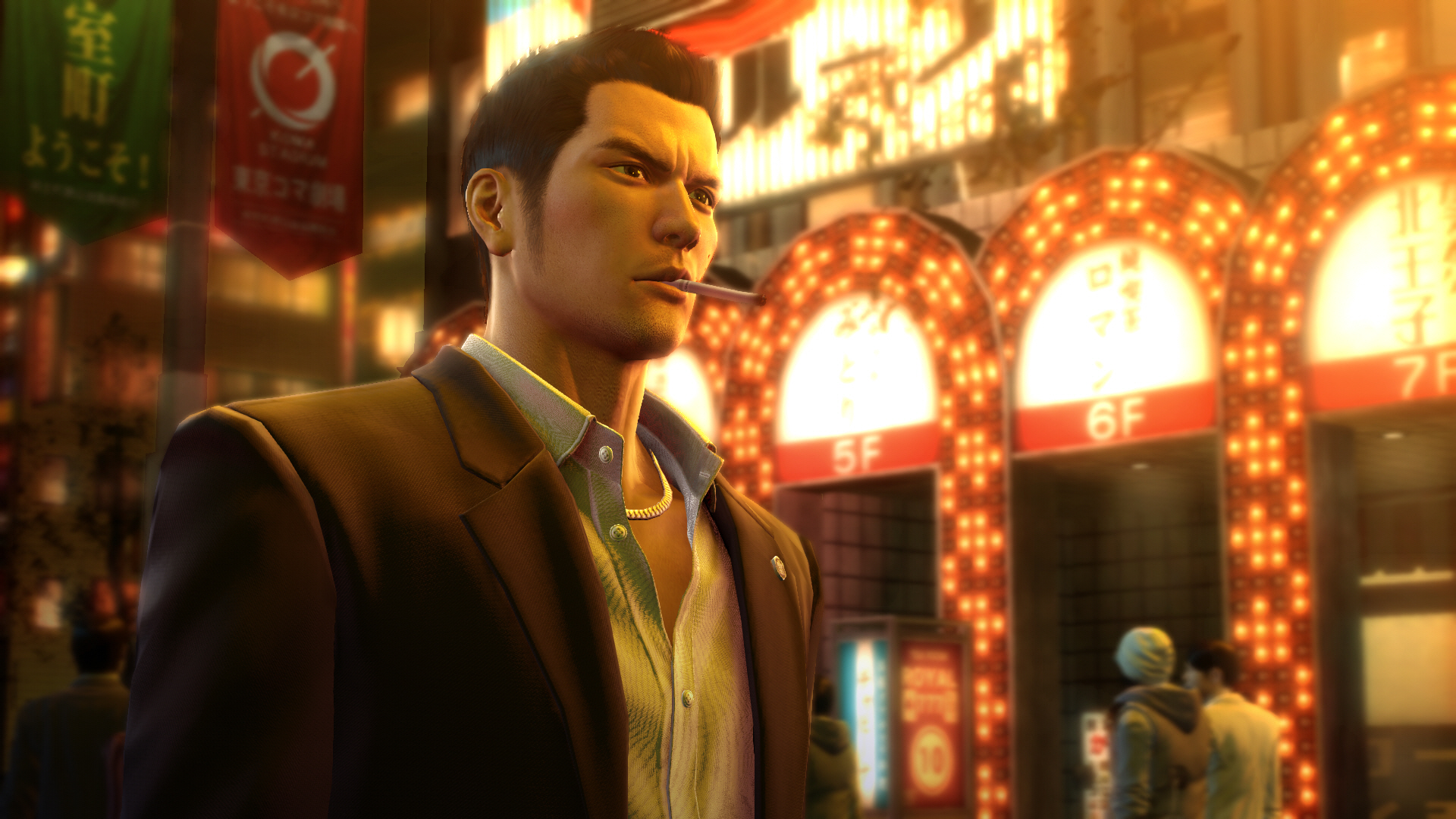 Yakuza 0 is a misleading title, because it’s not about yakuza and doesn’t have zero of anything. Yakuza 0 is a game about machismo, loyalty, excess, and capturing a specific place at a specific time. That place is Japan and that time is the economic boom of the late 1980s, and it’s a game FULL of so many things that it’s at once an amusement park of side activities and a melodramatic story that’s compelling even without the trimmings.

Yes, I know that it’s Yakuza 0 because it takes place before the first Yakuza, and yes I know that this game’s story and style is heavily rooted in traditional Japanese gangsters called Yakuza. It’s called a literary device. But back to the game — the 1988 Japan setting is a crucial element to Yakuza 0. The Dojima Clan that Yakuza series hero Kazuma Kiryu calls home is involved in a real estate coup with hundreds of billions of yen at stake, with the linchpin in the deal being a 3×3-meter empty lot whose landowner has been missing for over a decade. Kiryu, in Tokyo, gets framed for murder over a possible connection to the lot’s owner, and becomes embroiled in a struggle to clear his name and foil whomever set him up. Meanwhile, in Osaka, Yakuza recurring villain Goro Majima is a successful club manager trying to pay off a large debt in order to re-enter the Dojima Clan’s good graces. Majima accidentally gets involved in the same conflict as Kiryu when he rescues a young blind woman from yakuza pursuers. All of this is Really. Damn. Cool.

It’s a little confusing switching main characters and principal settings every two chapters, but both Kiryu and Majima are likeable and their scenarios consistently great. Players of other Yakuza games are intimately familiar with both men, and seeing Kiryu and Majima as unfinished products 17 years before the time in which Yakuza 1 takes place, long before they become savvy criminals, is fascinating. Though calling either of them “criminals” may be misleading, as Kiryu is a saint among thugs and Majima is more an agent of chaos than a person who specifically does good or bad. Fans will also see familiar locations in a new context, because the Yakuza games of the 2000s have fewer disco parlors and undeveloped slums than the 1988 version in Yakuza 0.

Story and characters aside, Yakuza 0 overwhelms the player with optional content. There are two large city spaces to explore (Kamurocho in Tokyo and Sotenbori in Osaka, both fictionalized versions of real neighborhoods), two large game-spanning business ventures (Real Estate Royale and Cabaret Club Czar), 100 smaller character-driven side quests (called “substories”), and dozens of minigames, including faithfully-recreated 1980s SEGA arcade machines! You start with Space Harrier and OutRun, and can eventually unlock Fantasy Zone and Super Hang-On. Whew. That’s a lot.

Did Ryu Ga Gotoku Studio need to put real 1988 magazine covers to peruse in the racks? Did they need to include dozens of rules variations for darts, billiards, mahjong, and so many other optional games? No. But the Yakuza series at large relishes in including a wealth of pursuits for players to partake, and in taking small details very seriously. Yakuza 0 is my first Yakuza game, but after spending over 60 hours of gameplay in about three weeks I became obsessed. I loved the main story, I loved the mini games, I loved the celebratory handling of the 1980s Japan setting, and I was dangerously close to learning shogi to get a higher completion percentage at game’s end. I haven’t mentioned the martial arts, boss fights, or dating elements in Yakuza 0‘s gameplay because there isn’t enough room for me to do so. Yakuza 0 is bigger than a page full of reactions or three hours of podcasts. They put a lot of video game in this video game.

Prequels have gotten a bad name, arguably for good reasons. Rather than telling their own story, they often get caught up in fan service by retconning character relationships and winking at the audience. Yakuza 0, on the other hand, is one of the few prequels that not only lives up to previous titles in the series but surpasses them in many ways.

If you’ve only played later Yakuza games, it might be quite a shock to discover that, before becoming the Yakuza Paladin known as the Dragon of Dojima, Kiryu Kazuma was little more than an enforcer, beating up salarymen over gambling debts. And far from being the Mad Dog sociopath that we know and love, Majima Goro is a cool and collected Lord of the Night, running the most successful cabaret club in Santibori. Much of the fun of Yakuza 0 is how the game maneuvers the characters into the roles we found them in at the beginning of Yakuza 1.

But far from just looking back, 0 pushes forward in the gameplay department, building on the concepts found in the previous Yakuza games. Much like Yakuza 5, 0 has a strong focus on original music in substories, creating brilliant 80s pastiche tunes for the disco and karaoke clubs. Rather than only having one combat style per playable character as in previous games, you have four per character, allowing you to customize your combat style and take down enemies how you see fit.

Yakuza 0 distills everything good about the Yakuza series up to that point and creates an incredible foundation for entries to come. Though it isn’t my favorite Yakuza game (Looking at you, 5), it’s still a masterpiece of video game storytelling, is stuffed to the brim with content, and will always be considered a high-water mark of the series.

Yakuza 0 is a gosh-dang videogame.

Is that the most erudite statement I’ve ever written? Certainly not.

A videogame can take many forms, both in content and the perception of that content. To some, games are Tetris and Call of Duty. Endless puzzles or endless bloodshed, and repeat. It’s reductionist, but existing.

To others, a videogame is a ballooning budget, unchecked ambition, and a final, months-long push for underpaid laborers to recreate the most granular (and I truly mean granular) of details for a morose, amateur cinematographer feeling that their entire life in the industry will lead them to their magnum opus: the greatest “Dad Game” the world has ever seen. When this occurs, the play elements of the game spar with the narrative on-hand, like Super Mario sparring with The Godfather.

Enter Nagoshi Toshihiro and the Ryu ga Gotoku team. Yakuza 0 is a game that can be cinematic, sobering, and overly detail-oriented, with no shortage of Baddies and Daddies to speak of. But where other games back down from their more “game-y” elements in service of cinematic flair, Yakuza 0 has found a freedom unlike any other.

Yakuza 0 thrives on dissonance. Who is the man who nearly killed protagonist Majima Goro on the street and kidnapped the woman he was protecting? You could find the answer in 15 minutes, or you could completely blow off the entire story for 10+ hours as you become the Real Estate King of Kamurocho alongside your trusty advisor Nugget (a chicken won from a bowling alley).

Yakuza 0 has a warm, beautifully child-like idea of fun. It laughs in the face of the nihilism of current AAA development, and sets off on its on blazing path to wildly entertain with its humor and spontaneity. It’s endearing and enjoyable, simultaneously out of control and fully intentional with each movement.

Some games are more akin to movies, or books, or television. They may gild themselves in the foil of an interactive art form but at their core, they are truly embarrassed with their ludic origin. Yakuza 0 is nothing like this. It is unapologetically and brilliantly a gosh-dang videogame.