The Cycle of Isolation and Connection: A Thematic Analysis of Soul Blazer 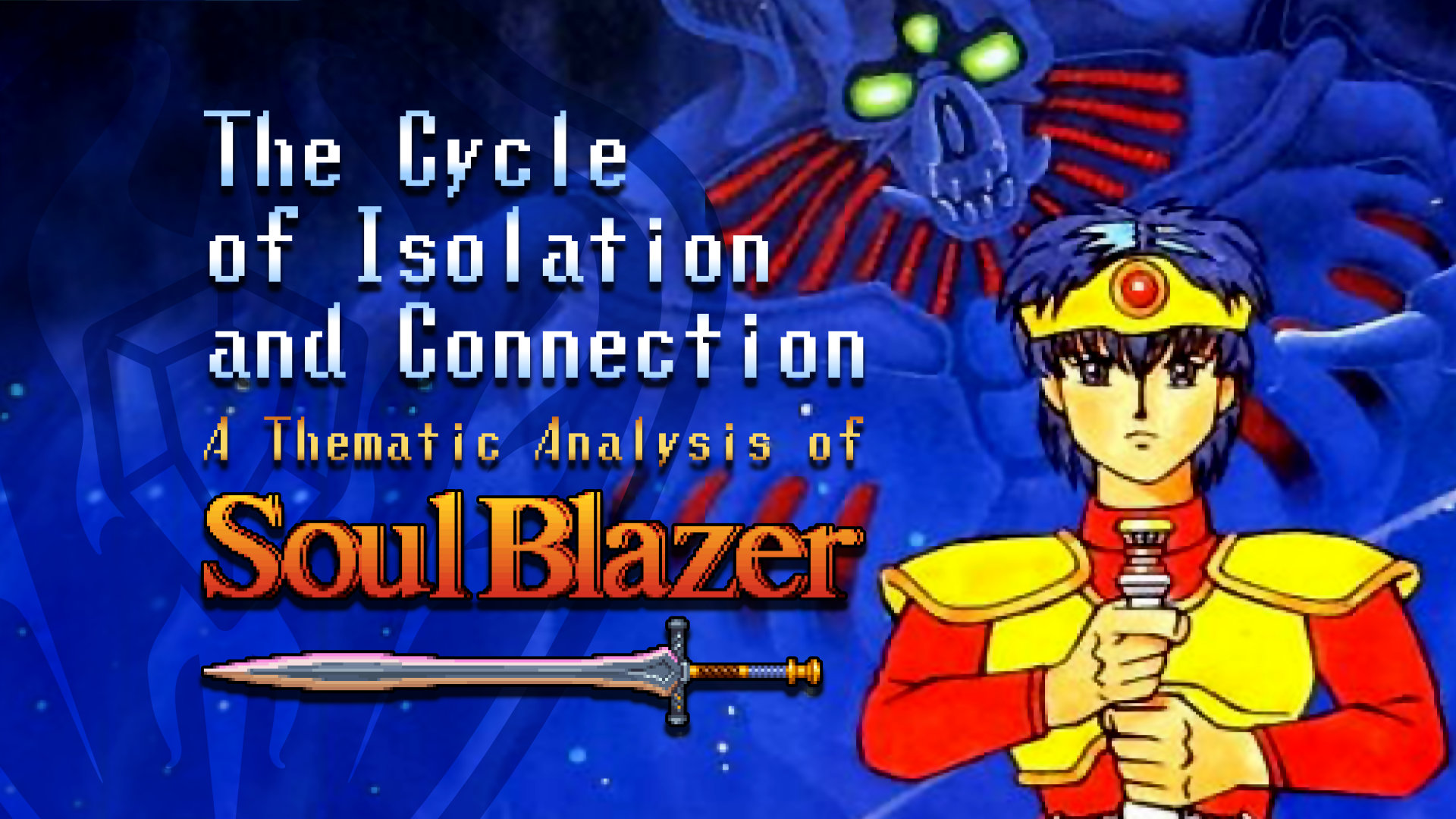 On its surface, Quintet’s 1992 action RPG Soul Blazer appears similar to any other Zelda-inspired game of the early ’90s. Originally titled Soul Blader in Japan, the game sits apart from its contemporaries thanks to its focus on life, death, and human nature, along with the religious overtones accompanying such themes. While Blazer‘s follow-ups (Illusion of Gaia and Terranigma) have richer character development and symbolism, as well as more refined gameplay concepts, this title is no less important to the mythos of the loosely connected trilogy.

Soul Blazer wastes no time setting the stage with a prologue that reads like something out of a fairy tale: King Magridd, ruler of the Freil Empire, descends into the temptation of greed when he learns of the genius inventor, Dr. Leo. The king plots to use the brilliant scientist’s gifts to grow his own fortune, capturing Dr. Leo and forcing him to invent a machine that can summon Deathtoll, the King of Evil. Magridd strikes a deal with Deathtoll to exchange all living creatures for a gold piece each. The world is left completely empty as all of its inhabitants disappear. Finally, the heavenly entity referred to as the Master sends his follower to revive the lost souls and defeat Deathtoll.

This story could have served as simple flavor text for a game built around hacking and slashing. Instead, it functions as a setup to a world filled with questions and revelations about life and existence that are, it’s fair to say, a bit advanced for the era in which the game was released.

The core gameplay mechanic is simple: the player is tasked with defeating demons and sealing their lairs, which either releases trapped souls back into the world or makes beneficial changes to the immediate environment. These monster lairs are scattered throughout a handful of dungeons in each region, and progression is locked behind the release of NPCs of varying importance. Often, the next section of a dungeon cannot be accessed until the player has revisited a town and spoken with the souls they have just released. Though very few souls are actually required to complete the game, the order in which the average player releases them is mostly intuitive enough to keep Soul Blazer moving along smoothly.

Towns are gradually repopulated, and the souls who live in them reconnect with their communities. From a game design perspective, it is certainly an incredibly satisfying feeling to begin in an empty field and watch structures and citizens gradually fill it with vibrancy and life. It’s evocative of a sim game, without all of the micromanagement associated with the genre. However, for those willing to look deeper into Blazer‘s mythos, these gameplay elements are simply the tip of the iceberg.

It is immediately evident that, much like its predecessor, ActRaiser, Soul Blazer draws upon Christian themes and imagery. However, the driving force behind the game is decidedly Eastern. The running theme in not just Soul Blazer but also Illusion of Gaia and Terranigma is that of an endless cycle of creation and destruction. Although the message isn’t as heavy-handed in Blazer as it is in the sequels, we get our first suggestions that humans may not be the most virtuous creatures. After all, it was by human design that the world was destroyed.

The duality of life and death—creation and destruction—is a constant theme. In one case, a woman still lives near her husband even after being reincarnated as a goat because retaining that bond still brings her happiness. The husband laments the loss of his wife but takes comfort in the goat’s presence. In another instance, Dr. Leo sacrifices himself in order to protect his daughter, Lisa. His final words suggest that creation is only a force of good if it is used to better people’s lives. In the wrong hands, it can cause misery and devastation. Though Dr. Leo perishes, his soul does not die, and when an inventor of his caliber is needed, his soul will be born into another being. Even in the context of Soul Blazer‘s gameplay, NPCs are revived and civilization is restored through the process of destroying monsters and sealing their lairs.

These are a few examples, but the entire narrative is filled with similar hints that the cycle of birth and rebirth is a natural part of existence. Upon the player’s first meeting with Deathtoll during the endgame sequence, the King of Evil shares his belief that reincarnation’s everlasting existence is a form of suffering. In this regard, it is revealed that Deathtoll is less of a black and white “good vs. evil” type of antagonist and more of a primal force of nature, a concept that is explored in much greater depth in the next two games in the series.

Of all the elements in Soul Blazer‘s plot, the second most prevalent theme is loneliness. It’s baked right into the core of the game’s presentation: the world is completely empty and the first non-heavenly being encountered is a single tulip that laments being alone in the world. All through Grass Valley, the first region in the game, this theme is hammered home. “Thank you for saving the villagers. They are now taking care of me,” the tulip tells the player after the town’s revival. “No creature likes to live alone. We have to help each other.” Yet another tulip muses that it has been watching a boy hide something nearby. This is an in-game hint about a hidden item, but it also suggests through subtext that nature is always watching us, even if we are unaware.

Tulips are not the only plants that carry such gravity. Another lifeform revived in Grass Valley is the ivy which climbs the cliff walls. There is absolutely no indication of this in Blazer‘s text, but a bit of research reveals that ivy is often representative of eternity and immortality, as well as affection and attachment; these themes play off of the villagers in Grass Valley particularly well. Whether it’s someone like the village chief’s wife, who is craving a connection, or Lisa, who is mourning the loss of a loved one, the world of Soul Blazer evokes the feeling of repeatedly overcoming isolation. Even after reviving an entire region, the player must then travel to the next empty place and begin the process again. This carries over into the soundtrack as well.

The Music of Soul Blazer

Composed by Yukihide Takekawa, vocalist of the Japanese rock band Godiego, Soul Blazer‘s music plays an important role in its presentation. For example, the track that plays on the file select menu has an exceptionally lonely quality. This same song also plays during the game’s various dream sequences, and what is a dream if not a person retreating into the loneliness of their own mind? The player spends a good portion of their time talking with NPCs in partially restored regions, where they can hear the track “Lonely Town.” Filled with the haunting melodies of wind and string instruments, the song suggests that something central to the soul of that town is missing. In contrast, once an area boss has been defeated, the track changes to “Lively Town.” The two compositions have essentially the same melody, but the latter has vibrance, depth, and melodic flourishes that evoke feelings of culture and peaceful existence.

The most powerful piece in Soul Blazer is “A Night Without a Lover.” Near the game’s climax, this song is performed by an NPC in Magridd Castle. In one of many late-game throwbacks to the early story, the musician reveals that he wrote the song to express his unspoken feelings for Grass Valley’s Lisa, who cared for him during an injury. While you won’t hear this in the game, Takekawa actually composed and sang lyrics for the song on Blazer‘s soundtrack CD, and they (of course) center on a person struggling with loneliness. The song itself may have lonely qualities, but as with most things in the game, the narrative plays with and subverts this particular aspect.

“Music is really strange,” suggests another late-game NPC. “The same music sometimes sounds very wonderful when I am happy and sad when I am depressed.” Though it is unnecessary to speak with her to progress through the game, it’s fascinating that a piece of flavor text could so succinctly describe the music’s impact on Blazer‘s story. When “A Night Without a Lover” first plays in game, the song has a sad and lonely quality. The melody is unchanged when the track plays again during the epilogue, but Lisa’s changed worldview alters the player’s perception of the song, making it feel more hopeful.

Despite showing tremendous promise as a pioneer of a fascinating RPG sub-genre, Soul Blazer‘s legacy is largely left as a cult favorite. There is decidedly good reason for this, given how unique and insightful the story and gameplay were for their time. While not every track in the game is unforgettable, Yukihide Takekawa managed to synthesize an accompaniment that perfectly accentuates Soul Blazer‘s other design elements. And fortunately, Quintet would go on to take the best elements of the title and carry them over into Illusion of Gaia and Terranigma. While we’ve seen spiritual successors, such as the Dark Cloud series on PlayStation 2, the concept of a world-building RPG is woefully underutilized, and one can only hope that the genre gains traction as indie gaming’s influence grows.