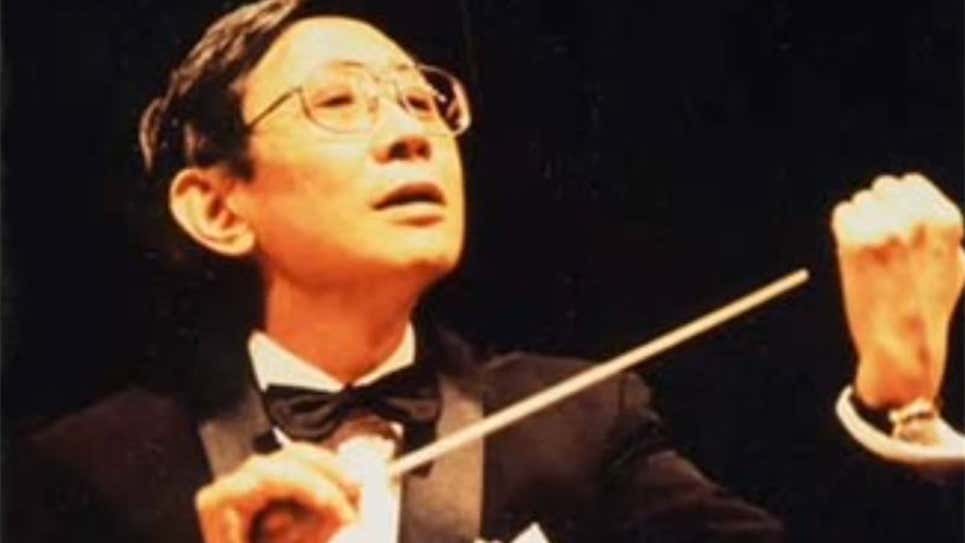 Recently I took on the monumental task of reviewing the entire backlog of Dragon Quest soundtracks to fill out our soundtracks section. I’d reviewed over a dozen Dragon Quest albums in past years, but this was like take an intense month-long music appreciation course where the sole subject was Koichi Sugiyama. It was a marvelous experience.

And before I go any further, permit me to make a statement about myself and my personal history before someone calls foul. I am not a nostalgia-possessed Dragon Quest fanboy. Far from it, actually. The first time I even touched a Dragon Quest game was at age 17; the only game in the series I’ve beaten is Dragon Quest IV for DS. I was raised on Final Fantasy, and I knew little about Dragon Quest as a child. Thus, nostalgia has no influence on me as I talk about the series’ music. I am a relative newcomer to the whole enterprise.

In 1986, Koichi Sugiyama penned the score for the very first Dragon Quest, and followed it up with the first of what would be many full orchestra recordings. This soundtrack only had eight songs, and they matched the basic sections of gameplay in Dragon Quest. The eight songs were as follows:

That’s it. That’s the whole thing. But it’s the foundation for hundreds of RPG soundtracks. Sugiyama influenced everyone with this, in much the same way that Dragon Quest influenced so many turn-based RPGs overall.

The most direct influence Sugiyama had was on himself. Yes, that’s right. These eight themes have been expanded, edited, built upon, and otherwise re-used in almost every subsequent Dragon Quest to date. As Dragon Quest, and all other RPGs, became more complex, adding character development and length to the plot arc, more songs had to be written. Specific character themes, sailing/flying music, additional dungeon/battle music, particular event/emotion themes, you name it, Sugiyama wrote it. But the big eight never disappeared. The Overture has retained its original form in almost every way. The castle theme is always written in a Baroque contrapuntal style, the field music is more romantic, and the battle music is always frantic and intentionally dissonant. Sugiyama has relied on his own original work as the foundation for subsequent entries in the series, and the result works surprisingly well. The fans eat it up, the critics (myself included) are continually pleased, and it fits the world of Dragon Quest so well, there’s no need to change it.

But nearly everyone followed Sugiyama’s footsteps. No, not in style. Uematsu went for a decidedly less classical style, and other Japanese composers went for modern pop and rock (such as Falcom’s “Sound Team JDK”). But the style isn’t what I’m talking about here. I’m referring to the choices of how much music to make, how long it should be, where it should be placed in game, and what mood each theme should set. These may seem like no-brainers, but before Dragon Quest, there was no precedent. Sugiyama and the developers of the very first Dragon Quest put the standard in place, and everyone followed suit in a rather homogenous way.

To make my point, let’s jump ahead over a decade and use another composer’s score to compare. Let’s look at Michiko Naruke’s work in the Wild ARMs series. Like the Dragon Quest series, Naruke-san established an opening theme that maintained its status in the series as the most memorable melody: “Into the Wilderness.” You know, the song with the whistle, in D minor? It’s not used as the opening music for each subsequent game, but the melody is found somewhere in each game.

The Wild ARMs soundtrack, as first published in the late 1990s, was 36 tracks long. And it had a lot of great, memorable music. But what does it come down to? Theme music for the following elements: town, castle, field, dungeon, battle. It’s worth noting that the strongest, most memorable tunes are intentionally assigned to these aspects of gameplay. There’s other music in there, and different towns get different themes, but those opening hours of gameplay match up with the basic template set by Sugiyama in 1986.

You can do this analysis with any number of RPG soundtracks. Almost invariably, you can match up some of the most memorable themes with the “great eight” template from the first Dragon Quest. And you may find further similarities; the castle (or “capital city” or “imperial”) theme music may use baroque, contrapuntal styles. You might find you enjoy the field music more than the dungeon music because the former has a more lengthy, more consistent, and more memorable melody than the latter. It’s a common trend for RPGs. Where did it start? I think I’ve answered that question by now.

There are many reasons to admire Sugiyama’s work. But one of the most viable of these reasons is that Sugiyama set the musical standard, and only the most risky developers dare to stray from it. Conveying the right mood for the usual environments of an RPG is of extreme importance, and Sugiyama hits the nail on the head each time, challenging other composers to do better in their own signature style or genre.