The Glitch in Transistor’s System 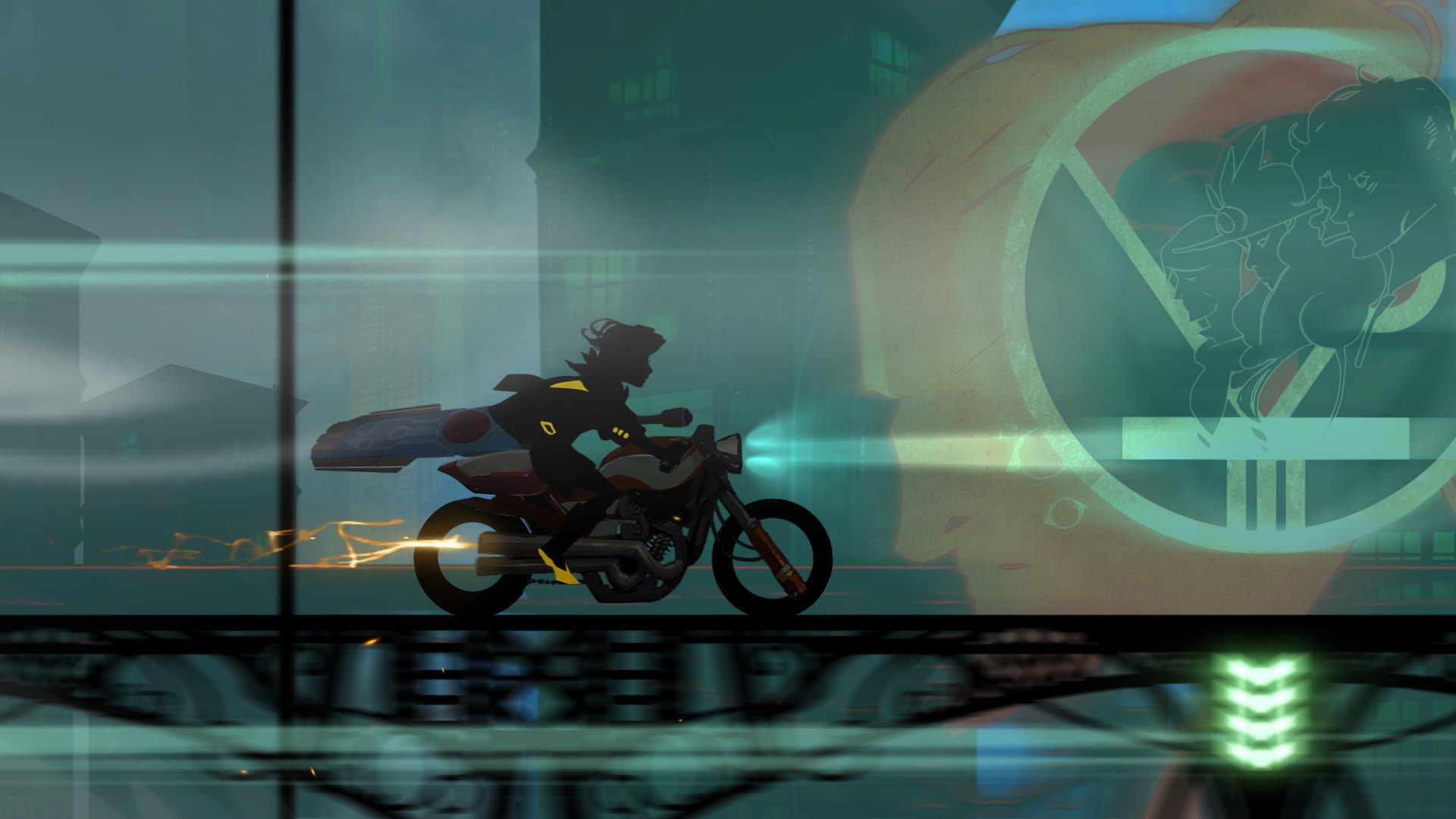 Let’s talk Barry Manilow. Bear with me here. 1978. The Even Now Album. “Copa Cabana.” It’s a song I bopped to regularly as a child, tucked away in the backseat of my grandma’s convertible with the wind slapping away at my face. It’s a banger, plain and simple, but there’s a tragedy hiding under all that percussion. Lola has lost everything by the end of the song, her spirit fading just like the yellow feathers in her hair. That’s how the ending of Transistor makes me feel. I’m Lola, and despite Barry’s frequent warnings, I fell in love. Now my heart’s a bit broken.

Mind you, this does not mean I hate the game. It’s the opposite! I adore this game. Supergiant Games has crafted one of the most cohesive experiences imaginable where almost every element of story, gameplay, and presentation excels in its own right while weaving together into a spectacular tapestry. Problem is, the ending undoes that beautiful tapestry and all that love has led to heartbreak.

Transistor devotes its entire narrative to themes of control, only to dismantle those themes with unnecessary suicide imagery in the final moments. Let’s discuss how it happened.

Transistor is first and foremost a meditation on control. I mean, that’s what a real-life transistor does, right? It controls the flow of currents. I’m sure that’s correct on a basic level, at least. Anyway, Transistor the game takes that wordplay and runs with it.

Enter Cloudbank, a digital metropolis where citizens have democratic control of the landscape itself. Except, do they? The nefarious Camerata are trying to take that power for themselves, and they are using the capital ‘P’ Process to do it. While the ivory infantry reshapes the city, the Camerata are busy collecting powerful voices towards their cause. I’m being literal. They’re literally absorbing the data of influential citizens into The Transistor, thereby increasing their own power and influence. This is where Red and the Boxer come in, but we aren’t quite ready to talk about them. We have to start with their foils.

Each member of the Camerata is a metaphor for control-gone-wrong, the subtle ways in which power corrupts us yet always leaves us wanting more. You’d imagine we are meant to learn something from them.

It all starts with Grant Kendrell. He’s an administrator — cyber-punk code for a government official — and Grant’s the best of the best. He has spent decades in service to his people, but underneath all that nobility lies a hunger, a growing desire to enact his own will. It’s an obsession that begins to consume him, and it’s not long before someone takes notice.

That someone is Royce Bracket, a revered Cloudbank engineer. He has dedicated himself to creation: building, demolishing, and redesigning city layouts to meet the ever-fickle needs of the Cloudbank tastemakers. He eventually begins to see this constant change as a poison, chaos rather than progress. Then, as egomaniacs so often do, he decides he’s the one to fix it. Royce seeks out Grant, and thus the Camerata is born: an invisible guiding hand to steer Cloudbank towards their vision of utopia. Their numbers only grow.

Next up is Asher Kendrell. He begins as the savvy news-hound hot on the Camerata’s trail, but that all changes when he meets Grant. He’s immediately infatuated, consumed by a toxic love so potent that Asher loses sight of himself, and the Camerata suddenly has a man with his finger on the pulse. Asher controls the flow of information, and Grant controls Asher.

That just leaves Sybil Reisz, the socialite-parasite that sniffed out Cloudbank influencers and marked them all for death. Her last mark is Red, and this is where things go off the rails.

Sybil is someone who must control others to feel powerful herself, including the people she loves. Thus, when her burgeoning crush on Red is met with distance, her once innocent love begins to fester and warp into a twisted obsession defined by possession. Red must belong to Sybil, and no one will stand in her way. Unfortunately, that’s exactly what the boxer does.

The Boxer is a man in love, so it is without hesitation that he steps in front of the blade meant for Red. Everyone loses their power in the aftermath. The Boxer, a man defined by physicality, becomes a disembodied consciousness trapped within The Transistor. Red, the silky songstress whose words moved millions, loses her voice in the struggle. Even Sybil, whose social control was the foundation of the Camerata, loses everything in her failure to capture Red.

The Process starts wreaking havoc from there, and Grant no longer has even the semblance of political power that he once maintained. He retreats within himself, taking the bewitched Asher down with him and leaving Royce to sink deeper and deeper into megalomania. They all want control back, and they will go to increasingly disturbing lengths to get it. It doesn’t go well.

We already saw Sybil try to retake control by possessing Red. She ends up processed. Grant’s fate manages to be even darker. Faced with an utter loss of control, The Process at his doorstep, Grant craves one last moment of power. Sadly, he convinces himself that moment is his own death. He kills himself, and by extension Asher, who refuses to exist outside of Grant. Royce sees all of this and learns nothing, vowing to reclaim The Transistor. He lures Red in and fights her to the death — his own death, it turns out — and the Camerata is no more.

We are left with what appears to be a cautionary tale, four vignettes to show us the dangers of power and control. Sybil attempts to possess others and loses herself in the process. Grant refuses to exist without control. Asher refuses to exist without Grant controlling him. Then there’s Royce, whose quest for control quite literally destroys him.

Yes, these tales seem cautionary. They seem like they’re showing us the paths our hero could have taken in order to emphasize that Red made a better choice. Well…

She doesn’t. Red does so many incredible things throughout this story: survive tragedy, pick herself up, confront the people who have hurt her. But, she doesn’t make a better choice.

With Royce defeated, Red finds herself alone in a city that bends to her every whim. She holds the key to Cloudbank in the palm of her hand, but all that power can’t ease the sting of loneliness. Thus, Red does what no other character has been able to do — she refuses control. She hugs the Transistor, lays down beside what remains of The Boxer, and impales herself.

And there it is. Suddenly I’m Lola, repeating these events over and over in hopes that something will change. It won’t. Whether you’re Lola wasting away in that smoky bar or Red suffering recursion after recursion, nothing changes. This ending is absolute, and it is devastating.

We can argue as much as we want that this isn’t really suicide, that it’s technically a data transfer, but that imagery is undeniable. Red has killed herself to be with The Boxer, and she has become a tragic reflection of Asher in the process. Rather than learn from the cautionary tale, she has repeated it, and I am left wondering what the point was. Is the message that everything is pointless and bleak? I sincerely hope not. Supergiant has more to say than that. Yet, if Grant and Asher are no longer cautionary tales, perhaps none of the Camerata are. Perhaps we are to control, be controlled, or die? No. I reject that conclusion.

Taking Control of the Narrative

In the end, I don’t believe Supergiant intended to romanticize death with this ending. Whether it was a dark day in the writers’ room or just a bit too much Shakespeare in the coffee that morning, this ending wasn’t meant to be so bleak. It was likely a declaration that true love and companionship defy control. That’s not what I heard, though.

Perhaps the saddest part for me is that we were so dang close to the perfect ending. Just before laying down next to The Boxer, Red hugs him. She hugs The Transistor, her chin cradling into the nook of the hilt and her shoulders tightening as she squeezed him with all her might. It’s a moment of such simple love and affection, but it carries far more weight than the scene that follows.

She could have been absorbed then, hugging the man she loves and reminding us that control and oppression are conquered by unity, not death. If I’m honest, that’s the ending I choose to remember. It’s a fabricated ending for sure, but it preserves my image of a game that I adore in all other respects. I refuse to remember the death. I’m going to remember the hug.

Now, if you’ll excuse me, I’m going to blast some more Barry and feel my feelings.