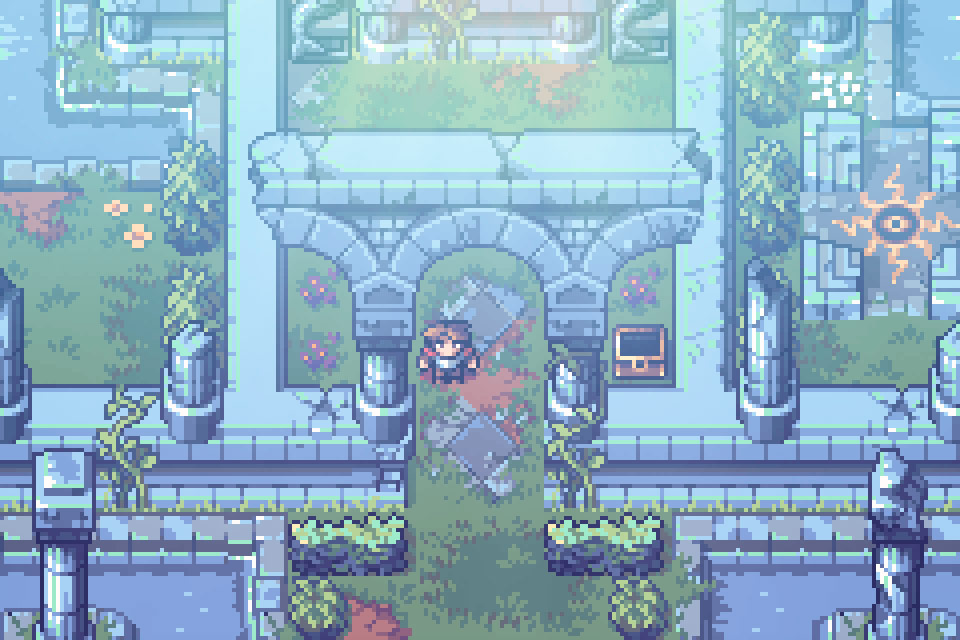 What are you trying to prove? It’s a question I’ve been asking myself a lot lately, and one that feels particularly important right now. That’s probably why Something Classic Games‘ Shadows of Adam struck such a chord with me: it asks the same thing. What are we trying to prove? Who are we proving it to? Do those punks even deserve us? Shadows of Adam asks all this and more, and even manages to posit an answer by the end.

First things first. WARNING WARNING SPOILERS AHEAD. We are going to be weaving through the history of Shadows of Adam, as well as its characters’ inner workings. So… I’m gonna be spoiling pretty much every major story beat.

Shadows of Adam opens on the titular Adam, a small village nestled away inside the Misty Woods. It’s a village of refugees, survivors of the Wraith War that pitted men against magic and forever changed the landscape of their society. Here we meet Kellan and Asrael. Kellan is the son of the great war-hero Orazio and an aspiring hero himself. Asrael is Orazio’s adoptive daughter and sister to Kellan. Problem is, the world is in trouble and only Asrael has the power to awaken the crystals and quell disaster. Stop me if you’ve heard this one before.

Mysterious doom, small-town heroes, crystals: it feels a bit overdone at first glance. In fact, it was enough for me to discard the game initially. I put Shadows of Adam down after the first hour and didn’t return to it for months, only to discover that the game’s true colors start to show five minutes later. It turns out Shadows of Adam is all about subverting those tropes, the biggest example being Orazio. Uh oh! Orazio was actually a pretty scummy guy all along, manipulating our four heroes for his own nefarious, albeit tragic reasons. The radiating effects of this action lead our heroes astray, and they all end up dedicating themselves to the menacing shadows that loom over their lives. For our heroes Kellan, Asrael, Talon, and Curtis, the journey is not about defeating evil but relinquishing those shadows.

Kellan and His Daddy Issues

Kellan screams JRPG protagonist: he’s a physical tank, a peppy aspiring hero, and just a bit dense. He’s a real himbo, in the most loving way possible. The nuance comes from why he is like that.

It all ties back to Orazio. While first painted as the classical hero, Orazio is anything but. Born a magic-user within a society that scorned it, Orazio was forced to hide his abilities until the fateful day that his friend was hurt. Against his better judgment, Orazio saves his friend’s life and is immediately arrested. He narrowly evades execution, escaping with an understandably large chip on his shoulder, and when the Wraith War finally breaks out, Orazio is more than willing to assume power. He is crowned a hero for decimating the magical hordes and retires to a quiet life in Adam. Life can be cruel, though, and while Orazio finds his love, he loses her in childbirth. That child is Kellan, and Orazio blames him.

So, is Kellan generic? Or, is he in denial, desperately craving the approval of the man that hates him? Kellan chooses to be a tank, to be peppy, and even to be a bit dense because these are the traits of an archetypal hero. It’s a respectable goal with a terrible motivation, and that juxtaposition starts to strain Kellan’s relationships with the people that actually matter. During childhood, for instance, Kellan watches bullies tear into Talon and does nothing. He’s so concerned with being loved and impressive that he ends up a bystander rather than a hero.

Later in life, he pushes Asrael to embark on their dangerous quest, trading his sister’s safety for a chance to impress dad. Even in the final moments of the game, a corrupted Orazio defeated, Kellan is still trying to earn his father’s love. He opts to stay behind and die in the collapsing ruins, one final gesture for his withholding dad. Yet, in this moment, Kellan then makes a better choice: Asrael’s safety. She threatens to stay with Kellan and perish as well, so Kellan finally abandons their father. In doing so he proves himself, perhaps for the first time, to the right person.

From here, you can see this “finding the people that deserve you” theme surfaces a lot in Shadows of Adam.

Asrael was a born mage, something quite rare after the Wraith War. Imagine a war fought largely with magic, a war that devastated the entire world, and the little kid next door is slinging spells left and right. You might be worried. The people of Adam sure were. Orazio doesn’t exactly help, but did we expect him to? Perhaps because he remembers his own closeted magic, or perhaps because he is just the worst, Orazio teaches Asrael to hide her powers. This is despite the town already having seen all that spell-slinging. Thus, Asrael grows up denying a big part of herself, a not-so-secret secret that she is shunned for anyway. She internalizes that fear and hate, and by the time we meet her, she is the quiet and meek mage archetype that we know all too well.

That starts to change as their journey unfolds. The quest to acquire the crystals and save the world may be risky, but it’s also a chance for Asrael to prove herself. If she manages to save the world and use her magic to do it, everyone has to accept her. Right? She begins to give so much of herself to the quest that there’s almost nothing left. She fights monsters, demons, and despots. She explores dangerous ruin after dangerous ruin. Even the crystals themselves are deadly, poisoning and warping the magic inside her with each activation. She makes a change, though, in the same moment as Kellan. While her final threat to stay behind and die alongside Kellan reads as sacrificial, maybe it’s the opposite. She knows it’s a threat, that Kellan could not bear losing her. In the most dramatic way possible, it’s a recognition of her own worth. She doesn’t need the world to love her, not dad, or even Kellan. She needs to love herself.

I love Talon. I can’t help it. Maybe it’s his overt sassiness, maybe it’s his uniquely support-oriented take on the thief archetype, but I love him. However, he doesn’t really deserve that love at first. He’s a bully.

Talon is everything we expect from thief characters: mischievous, snide, and self-serving. In other words, he’s a jerk. Unlike many JRPGs, Shadows of Adam addresses this fact: it comes from a place of pain. Talon was sickly as a child and unable to keep up with the other children of Adam. With this came pity, bullying, and disregard. This bred resentment. Eventually, Talon’s resentment looms so large that he leaves the town altogether, abandoning the people that mistreated him. I get that, I do. The issue is that he doesn’t set off in search of peace or safety but in search of approval. He needs to prove the bullies wrong.

When we meet Talon again, he has completely changed. In place of fragility and kindness, he has power and superiority. Though he agrees to join the party, it’s not without conflict. He still hates Kellan, reminding him of his past neglect at every opportunity and denying Kellan any chance to make amends. He’s just plain rude to Curtis. Even Asrael, the one person who cared for him back in Adam and the girl Talon may even love, is pushed away the moment she disagrees with him. Talon built up walls to protect himself and prove the bullies wrong but became a bully along the way. It’s not until the final hours of the game that he makes progress, softening his edges with small gestures to show that he cares about Kellan and Asrael. In small but meaningful ways, he begins to forget the bullies and let his friends in, deciding that some people are worth it.

Curtis and the Road to Redemption

Curtis is a pretty excellent monk. He’s patient, kind, and cool-headed. Plus, he can suplex everything in the game, which is pretty radical. Even so, that’s somehow not his best quality. That honor goes to his backstory. He’s looking to prove himself just like the others, but he already found the people that deserve it.

To be fair, Curtis has a few years on the rest of the gang, almost twenty in fact. Remember Orazio’s childhood friend, the one whose injury set Orazio and everyone else down their tragic paths? Yeah, that was Curtis, hence the edgy scar. Curtis and Orazio were born into a society that essentially treated them like prisoners. They were chained, forced into back-breaking labor, and (of course) denied magic. See, that sort of power was reserved for the priests and priestesses alone. Yet, despite all of those red flags, who do you think Curtis devotes himself to?

Curtis feels an intense duty to his society, even to the priests and priestesses that subjugate it. That sense of duty convinces him to stay behind when Orazio escapes and keeps him there even twenty years later when Orazio returns to lift their crystal. It is only in seeing this betrayal that Curtis realizes his own misplaced dedication, his wasted decades. He begins searching for someone new and lands on Kellan and Asrael. This is why we see him take on a mentor role with them — he watched their father go down the wrong path and feels partly responsible. Kellan and Asreal have been caught in the fallout, and protecting them is a form of redemption for Curtis. He has been in their shoes, made their mistakes, and is ready to guide them. It’s lovely, really. His search to prove himself ends as theirs begins.

In the end, Shadows of Adam is imploring us to prove ourselves, but more importantly, prove ourselves to the right people. That may be your sister, yourself, friends, or even the next generation. It’s about finding the people who deserve your respect and dedication and giving it, whoever those lucky people might be.

It’s pretty funny, honestly. This is my first article for RPGFan, so I am most definitely trying to prove myself. Thankfully, everyone seems lovely and deserving. However, we aren’t always so lucky. It’s easy to get caught up in the expectations of those with power over us, those who we are taught to impress. I know I do, probably more often than I care to admit. I need to quit that nonsense, though. We all do. We need to take a step back, cut ourselves some slack, and focus on the people who matter most. Also, we maybe need to play Shadows of Adam.