The Ugly Side of Paradise: A Deeper Look at Pokémon Sun & Moon’s Team Skull 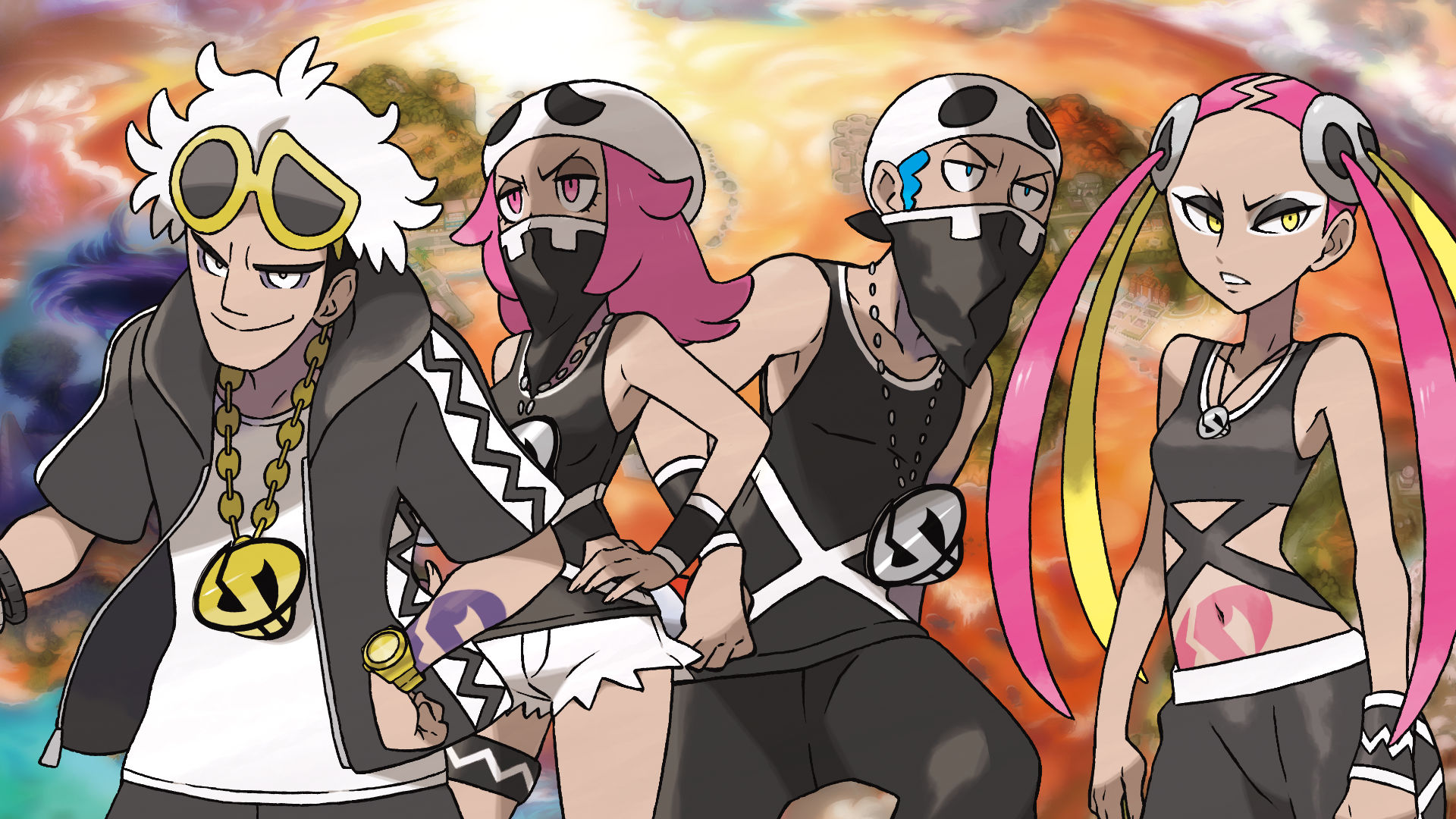 Quick, what’s the first thing that pops into your head when someone mentions Pokémon Sun & Moon?

For me, it’s Team Skull, and I’ll bet most of you would say the same.  Imagine Pokémon Sun & Moon without Team Skull for a moment. Pretty “meh,” right? Indeed, those guttersnipes with their sick rhymes, ill dance moves, cartoony mannerisms, funky fresh musical themes, simple-yet-effective outfits (Once that Team Skull tank top became available to purchase in-game, I plunked down the 10,000 PokéDollars for it with no hesitation), and overall vibe steal the show.

Scouring the Internet looking at polls, fan sites, blogs, etc., a popular opinion/sentiment is that Team Skull may be the best villainous team in a Pokémon game since Team Rocket. Even then, what made Team Rocket so iconic was not so much their role in the games, but their memorable characterizations in the anime. It’s hard not to love the whole “mischievous miscreants” vibe Jessie and James put forth in the show.  In much the same way, I found Team Skull’s poseur tough-guy stances and attitudes to be a hoot every single time I encountered them in the games. They were those mischievous miscreants who didn’t seem to take themselves quite as seriously as the more corporate elite or mafia-type crime syndicates. One of my favorite Team Skull interactions happened early in the game when a pair of grunts, whom I’d trounced earlier, came back for revenge. When they asked if I recognized them, I was given a “Yes/No” choice, and when I said “No,” that messed with their heads in a hilarious way.

But as I played the game further, Team Skull’s thuggish street gang hijinks and posturing gave way to a surprising amount of depth, making these bandana-wearing bandits surprisingly sympathetic. Team Skull and its place in Alola actually portray a deeper truth to Hawaii than what we typically see as tourists, which is quite unexpected in a video game essentially for children (or children at heart). Team Skull’s role as a slice of social commentary elevates them beyond mere thugs and goofy henchmen, and that depth appeals to more adult Pokémon players.

Let’s take a look at Hawaii, the part of the world Alola is based on. Because of inflated resort pricing on basic commodities and the fact that many of those staples need to be shipped or flown in, given the archipelago’s distant location from the US mainland, the cost of living in Hawaii is the highest of any state in the US. Could you afford to live in a place where a gallon of milk costs upwards of $10? I sure couldn’t.

Several sources for poverty statistics, both empirical and anecdotal, posit that somewhere around 1 in 6 people in Hawaii live in poverty and that the state has the highest per capita rate of homelessness in the United States. I was watching a Hawaii-centric episode (specifically season 2, episode 4) of a television show called Huang’s World where, at one point, host Eddie Huang visits a tent-city community enclave of houseless people in Hawaii who live off the grid and are self-governed. Those people don’t consider themselves homeless (since their enclave is home to them), merely houseless. Some of them had mental health issues, drug problems and the like, but most had simply fallen on hard times and lacked the means of accessing help and resources they need due to poverty. Many of these downtrodden people are native Hawaiians who have called the islands home for generations, yet are forced to the fringes by colonization. They’ve been priced out of their homeland. To say it’s tragic is a gross understatement.

After seeing that show, I could not help but make the “art imitates life” connection to Team Skull. Like that aforementioned enclave and its community in Huang’s World, Team Skull represents that last chance refuge for those discarded “1 in 6ers.” I’d venture to guess that Team Skull’s members are native Alolans who were pushed to the fringes once their homeland became a playground destination for wealthy Pokémon trialists/tourists like the protagonist (whose mom must be loaded if she can afford such a large beachfront house in the most desirable section of Alola). If you follow the games, many members of Team Skull either live in the slums (Po Town) or in the trailer park/tent-city enclave on Route 13 of Ula’ula Island similar to the one I saw in Huang’s World. Neither place is desirable to live in, but are a charmed life for Team Skull grunts provided there’s even room for them in those places. Otherwise, the grunts at the bottom of the totem pole are out on the streets, hustling to merely survive. I initially chuckled at one grunt doing his Team Skull dance and saying he’ll take a Hyper Beam to the face for 10 PokéDollars. But it was also a sad reminder that this level of desperate poverty is very real in Alola, and that poor guy was one of the many nameless and faceless poor, both literally and figuratively. But although many grunts may be houseless, Team Skull is home and family to them, which is why they follow the Team Skull credo so ardently — misguided and wacky as it may seem to us.

I think that’s the heart of why I, and others, adore Team Skull and may even root for them, even though they’re the “bad guys.” They are the disenfranchised, and every one of us who has known struggle can relate to their disillusionment. Other villainous teams in Pokémon games are well-funded organizations with fancy uniforms with access to the best of everything at their disposal. Team Skull personifies the impoverished who are forced to make chicken soup out of chicken poop. Unscrupulous corporate and/or political interests have no qualms about exploiting the underprivileged by preying on their desperation, and that is precisely what the seemingly benevolent yet utterly despicable Aether Foundation does to Team Skull. If anything, the folks in Team Skull are not villains but victims, who get laughed at and screwed over by everybody.

Team Skull may be chock full of hilarious antics that rarely let up even when things get grim, but they also have a pathos to them never before seen in prior Pokémon games. With nothing at all and, therefore, nothing to lose, Team Skull’s show-stealing momentousness is why Pokémon Sun and Moon are among the most memorable games in the series. Forget all the new Pokémon, Alolan’s forms of old Pokémon, Ultra Beasts, and all the other Eldritch abominations that are normally the stars of these games. The Sun/Moon generation of Pokémon was all about Team Skull.