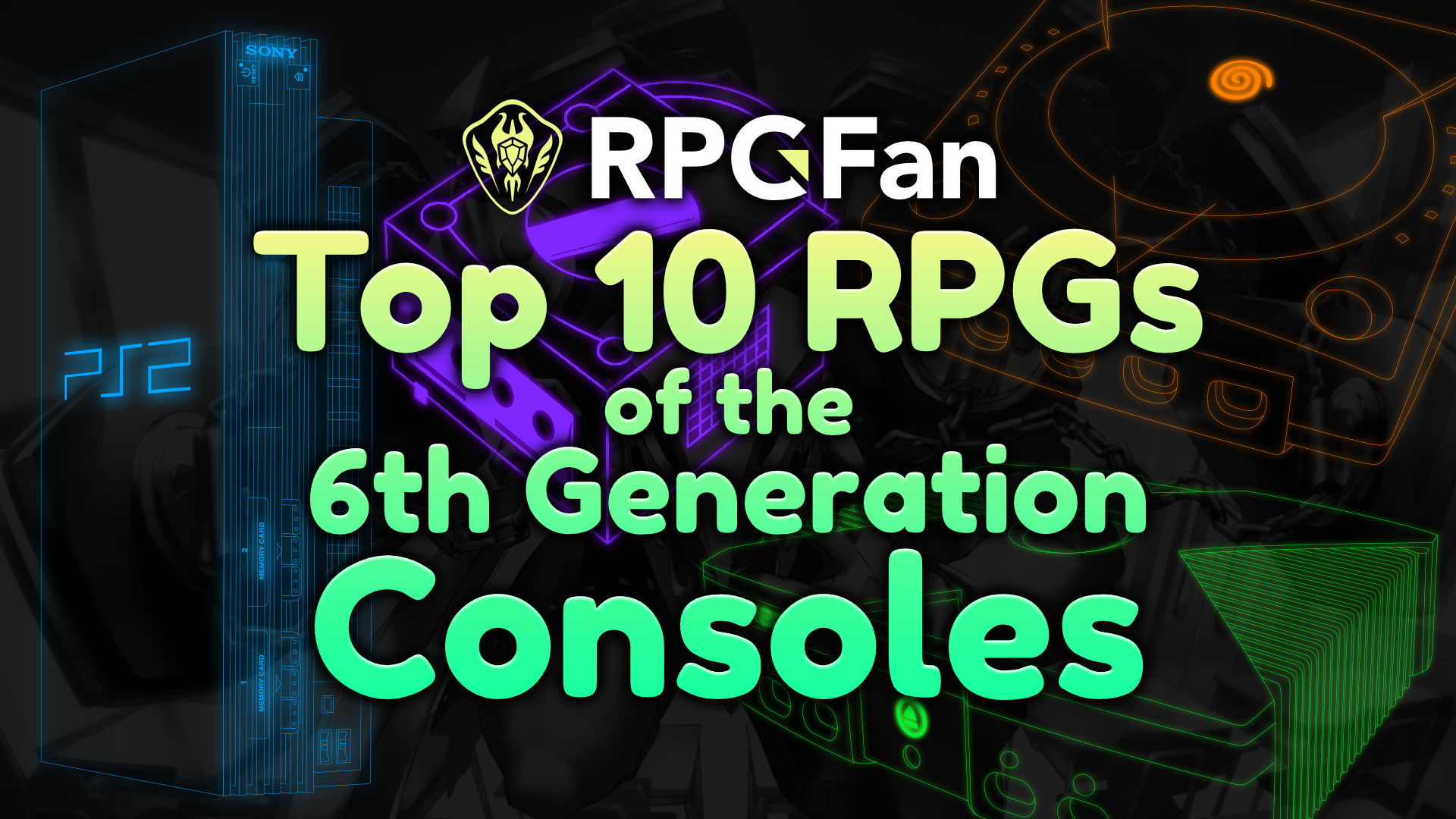 Even though there are still a few RPGs being released on the PlayStation 2, a lot of RPG fans have now moved on to the next-generation consoles like the Xbox 360, PlayStation 3 or Nintendo Wii… okay, maybe not the Wii but that’s another story altogether.

In any case, we thought this would be a perfect time to look back at the previous generation of consoles and come up with a list of our favorite RPGs that were released on those consoles. There’s no doubt that the last generation gave us a TON of great RPGs and it certainly wasn’t an easy decision for our editors but we managed to come up with our own personal Top 5 which we in turn used to make an Overall RPGFan Top 10 list.

Though it may be the bottom rung on our list, Star Ocean: Till the End of Time is by no means a title PS2 owners should have missed out on (it beat out the generation’s other hundreds of RPGs, after all). With its incredibly fast-paced and hyperactive battles alongside the fairly robust item creation system, this well-regarded galactic tale is as much fun as it is enormous. Fayt Leingod’s large scale planet-hopping expedition had our hero blasting off to every star in the sky, and while he occasionally overstayed his welcome (Elicoor II, anyone?), the game’s obvious pacing faults are easily overlooked thanks to the gameplay achievements it prides itself on.

The Dreamcast might have met an early grave, but the games it spawned have yet to die out. Case in point, Skies of Arcadia (later Skies of Arcadia Legends for the GameCube), a swashbuckling, sky pirate adventure whose lively characters and fantastical aerial settings made many a gamer gladly walk the plank. From the cutlass land battles to the monstrous ship duels in the skies, SoA was a lengthy title which played splendidly for fans of turn-based gameplay. In addition, players were constantly competing with rival pirate crews in attempts to pioneer uncharted lands and plunder troves of treasures, making this title of travel and discovery a truly grand adventure.

Merging two polar opposite franchises could easily result in a very lopsided product, but when those franchises are as celebrated as Final Fantasy and Disney, it would take a whole heck of a lot to screw it up. That said, Square Enix’s now prominent cross-over series was pretty much a risk without the risk, and that goes double for Kingdom Hearts II. It was everything the first installment was and then some. More worlds, more Keyblades, more ambiguous story arches, more, more, more! It tossed in an additional cup of Disney lovin’ and completely amped up production values for those who weren’t already entranced by the original. You might not care for its legions of fanboys, but it’s hard to ignore KHII‘s good-natured fun.

The folks at Atlus successfully execute things that few other developers even consider. When you look back at their Megami Tensei series – Shin Megami Tensei: Nocturne with its demon-infested Tokyo or the 16-bit Shin Megami Tensei installments introducing our phallic friend Mara – it should have come as no surprise that their next checklist theme would be cannibalism. Such a gruesome activity helped give the Digital Devil Saga series a very unique taste (literally?), but it was the excellent cast of characters and downright mean Press Turn battle system that made it so memorable. DDS2 in particular perfectly showcased what a Megaten game was all about. Difficulty, maturity, philosophy; it’s all there, and was a solid wrap up to one of the generation’s most grotesque titles.

Six. That’s how many game boxes we were all supposed to own with the “Xenosaga” name printed at the top. But thanks to atrocious sales for Xenosaga II, developers had to do some serious number crunching and knock that total down to three. Bummer, right? Well, actually not really! As it turned out, Monolith Soft’s finale to the forced trilogy was unanimously their greatest title yet! As expected, Xenosaga III played well, with a fair and steady difficulty (unlike its siblings). But above all else, Xenosaga III tied its story together in the most eloquent of ways; it didn’t feel forced, cheesy, or rushed, which was basically what we were all expecting. It exceeded every expectation.

This disgustingly huge franchise has always managed to garner praise whenever a new installment reaches the consoles, and Final Fantasy XII was no exception. Unlike past games, however, it was greeted with an equal amount of bitterness, but that didn’t stop FFXII from trampling its way into every single PS2 across the nation. The latest game mixed up the series’ tried and true formula. Gamers were given the freedom to run around huge maps littered with enemies. They collected loot and sold it for cash, and went on quests in order to rake in guild points and items. As many before have stated, it was an MMO without the MMO. Even the leveling up system required user input via the controversial License Board. Yes, it was different. But with orchestral sounds and cinematics aplenty, it was still Final Fantasy.

Star Wars: Knights of the Old Republic is one of the most highly acclaimed Western titles, period. It won numerous awards from the droves of gaming media and is generally considered to be one of the best games of all time. And it definitely deserves the praise. KotoR was constructed with a strong emphasis on character-driven gameplay and decision making. Constantly being forced to interact with the world’s NPCs meant players would inevitably be pulled to either the Light or Dark Side, thus opening up bounteous amounts of new content with each playthrough. Every decision was weighted; everything you did contributed to the state of your character. It was a brilliant presentation, and BioWare undoubtedly stole the show in 2003.

Dragon Quest VIII did absolutely nothing new, but it excelled so well in just about every category that the lack of innovation only proved to enhance its traditionalism. It’s a gorgeous game, even by today’s arguably high standards. The game’s world was brought to life in a stunning, crisp art style that gave endless flair to the miles of overworld that our heroes and their cursed king traveled across. DQVIII also employed a recognizable battle system (albeit with a few tweaks) that engrossed the diehard purists and genre newbies alike. Tack on casino games, monster catching shenanigans, and British voiceover work, and it should be no surprise why this beloved series’ latest game resonated so well with RPGFan’s staff.

Listen to my story. This may be our last chance. Tidus’ famous words paired with Nobuo Uematsu’s chilling Zanarkand theme are burned into a lot of gamers’ minds. It’s a great scene in a truly memorable PS2 classic. Final Fantasy X was just something few of us were prepared for. The voices, the graphics, the Sphere Grid, the Blitzball? Everything that was stuck in there was vintage Square. Multiplied by fifty. In addition to these new features and Square staples, a big part of what made FFX so special was the world of Spira itself. It was quite an oddity, what with its hybrid fantasy-technology locales and heavily spiritual inhabitants. You’ve got to admire an atmosphere as special as FFX‘s.

Persona 3 was a very special game for reasons that go beyond its storytelling and gameplay. Surely, its legacy of innovation will live on for a good long while; rarely does it happen that a developer attempts to shake up a genre as drastically as Atlus did with Persona 3. The Social Link system exposed players to a brand new way of tackling the age old process of leveling, and that alone gave P3 a twist that few have ever experienced, especially in an RPG. Setting played a crucial role in its success as well, and thanks to the bustling city streets, steaming ramen shops and zippy music, P3‘s modern day Japan was immersive in a relatable, infinitely refreshing manner. Love it or hate it, Persona 3 was a slick and enjoyable experience, one that is worthy of RPGFan’s Best of the Sixth Generation.