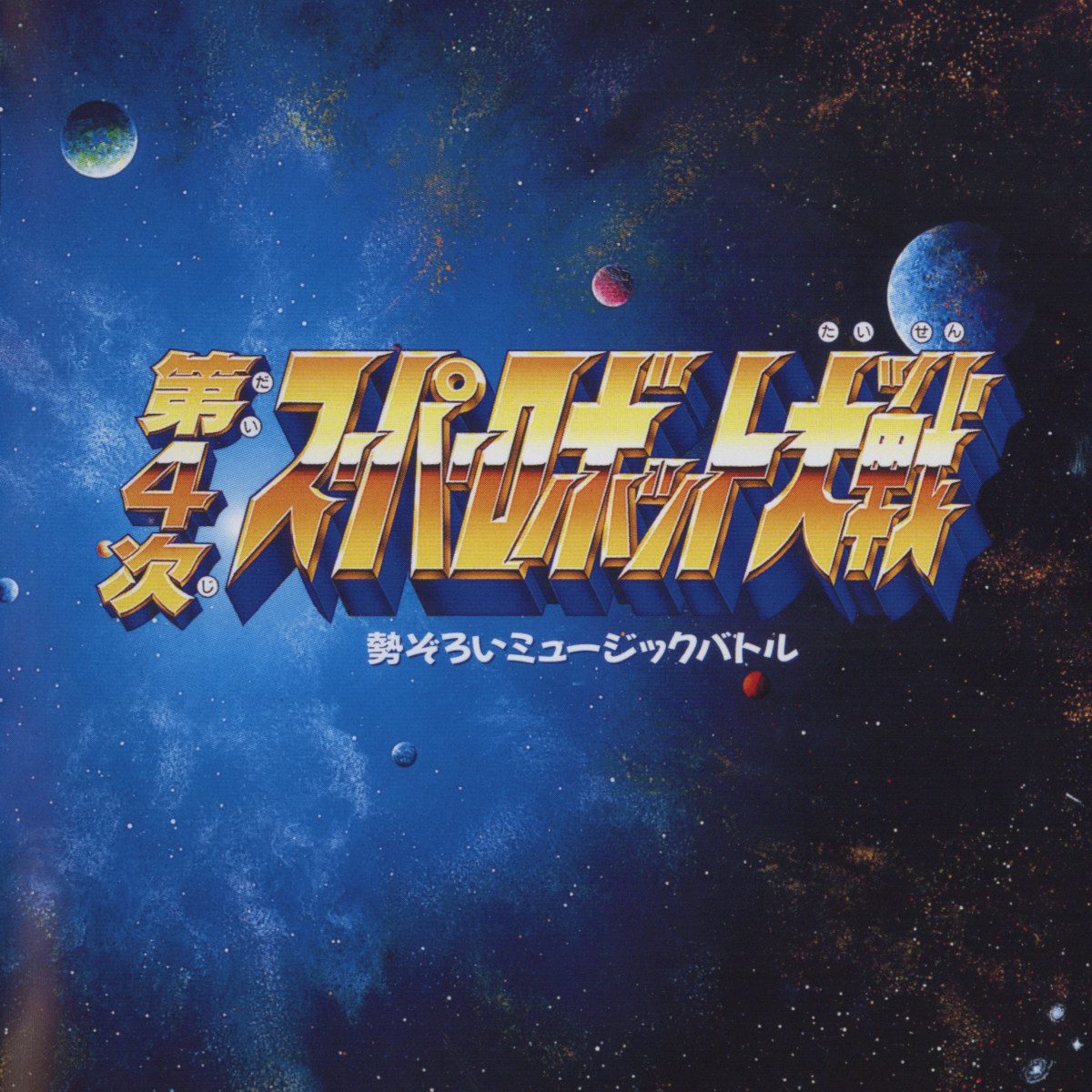 The first of Kitty Records’ three SRW soundtrack releases, this album is an OST/arrange album for 4th Super Robot Wars, which was released on the Super Famicom in 1995. The album marked the first attempt to really market the music to a strategy RPG that bred itself with a multitude of mecha anime. The soundtrack, like the franchise itself, is a copyright nightmare. But it happened, and so far as I can tell, this was the album that really started it all off.

Like its sequel, the soundtrack to Shin Super Robot Wars, this album has six arranged tracks to open (the first two being vocal tracks), and then it’s OST tracks from there on out. The album is most worthwhile for the arranged tracks, which are all great additions to one’s VGM library.

The vocal tracks aren’t the best songs I’ve heard in the massive collection of SRW vocal goodness (honestly, who can compete with JAM Project?), but they are still better than most other vocal pieces written and released around this same time in VGM history. “TIME TO COME,” regardless of its terrible double meaning, is a fun and enjoyable tune; but it doesn’t compare to “Cybuster,” which is performed by the same vocalist. To me, neither of them are comparable to the great vocals on Shin Super Robot Wars Powerful Music Battle II, but they’re still awesome cheesy/classic songs that capture the spirit of Japanese mecha franchises.

The other four arranged tracks display a variety of styles, but the one that provides the most obvious amount of aural enjoyment is track 3, the rock-hard “Main Theme.” Other tracks attempt the whole imperial march orchestra spiel, and I’m not normally a fan of that sort of music, though they do a good job with it. “Valcyon” was also good, but the arrangement wasn’t significantly varied from the original, so I wouldn’t have minded just having the original and letting them arrange another song.

The majority of the OST tracks are, sadly, SFC arrangements of some old anime themes. All sorts of 70s mecha anime from Go Nagai are represented, and we also get a little bit of Gundam representation. They’re all fun and enjoyable songs, especially if you have any knowledge of these oldschool mecha anime themes. Of course, the majority of these songs have been re-made upwards of five times for the different SRW soundtracks released over the last 15 years.

Track 23 begins the ten original tunes on the album. It almost goes without saying that these are more enjoyable than the “borrowed” songs. The styles, particularly synth rock and techno pop, lend themselves well to the quality of the Super Famicom sound chip. It’s very different from the sort of music Uematsu and other like-minded composers made during this time, but it’s noticeably better than other SFC tunes from the time.

All in all, it’s an enjoyable soundtrack, and anyone into the series ought to try and get their hands on this, as it’s one of the older and more “classic” albums in the series. Bigger and better things have come since, but there have been plenty of mediocre albums released over the years as well. Thus, this one would certainly be considered a “worthwhile” purchase.