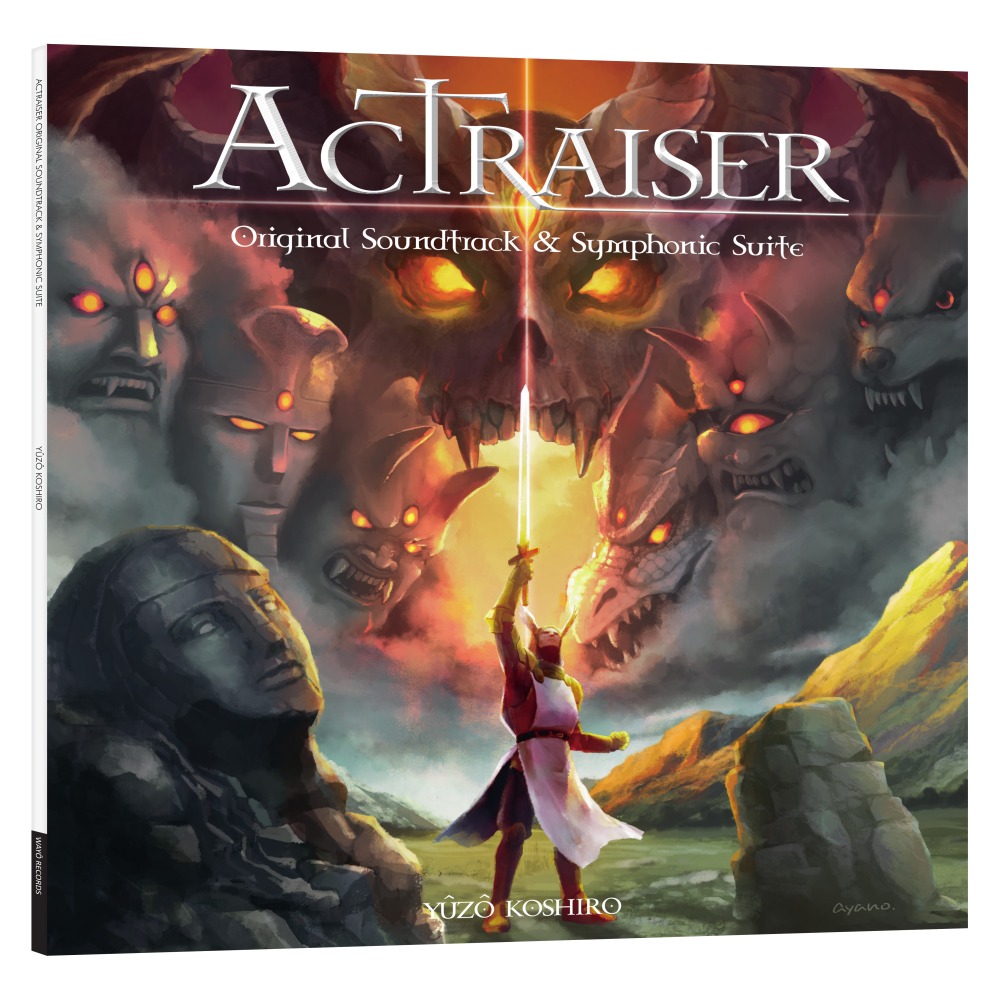 Wayô Records has made it a mission to provide soundtrack releases for games that would not be widely accessible otherwise. They’ve recently tackled gems such as Skies of Arcadia and Grandia and now turn their attention to an older game and even more ambitious project: ActRaiser. ActRaiser is an early SNES-era game with genre-hopping flair. Part side-scrolling platformer, part city-building adventure, you play the role of a deity tasked with slaying demons and restoring empty towns alongside your trusty cherub assistant. That assistant is featured prominently on the back cover of the collection, guiding you through the track information, helpful as ever.

Whether you use your accumulated power to terrorize townspeople or for its intended purpose, to help the towns, chances are you remember that peaceful village music. You may also recall the many times it shifts to unique, driving, and sometimes disorienting themes when you discover a demon lair and descend from on high to wreak havoc on it. The soundtrack somehow juggles these two different tones expertly and continues to be highly regarded by RPG music fans, yet is generally unavailable being out of print. This game is a perfect theoretical match for Wayô and an opportunity to put something genuinely outstanding together for ActRaiser’s 30th anniversary.

How the original ActRaiser OST conveyed this dual tone so well and sounded so good given the limitations involved with video game music from the time, I’ll never quite understand. It’s a testament to the talent and hard work of composer Yūzō Koshiro, who lent his voice to comment in the liner notes for this collection. Though he says ActRaiser’s music “…has some rough edges…with a sense of youthful energy,” he couldn’t resist revisiting more recently the challenges, rewards, and unique experience of composing for the Super Famicom. He thinks he shouldn’t forget the feelings captured in this soundtrack. I truly appreciate those comments because, in a way, we’re all sharing those feelings with him by listening to and revisiting this music. It’s almost a large-scale “Let us Listen” moment from the game (where your followers show up and communicate with you during your city building) that we can all be a part of — creator and fans together.

It’s fitting, then, that this release is more than just the OST alone, even if that makes it more difficult to choose where to start. The CD set includes the original soundtrack, a collection of unreleased tracks, and the fantastic ActRaiser Symphonic Suite from the Ancient Festival in Japan in 2018. As much as I looked forward to the Symphonic Suite, I had to show proper respect and listen to the original music first. Benjamin Joubert is credited for remastering on the CD side, while Shinji Hosoe remastered the entire set for vinyl. You may recognize the latter name from Xenosaga and the Zero Escape series. Those producers definitely helped both the original and symphonic music sound its best.

Having a balanced version of this work that allows you to hear all the different parts/voices heightened the nostalgia when revisiting the music, especially on tracks like “Fillmore,” “Opening,” and “Offering.” It can be a bit of a double-edged sword on platforming and boss tracks such as “Beast Appears” and “Avarice,” though, because the differences between those and the slower tracks are accentuated, making the action-intensive music occasionally sound (hyperbolically) like a dizzy circus. The strange duality of ActRaiser is here in force, for better and worse. That said, I adored hearing developer Quintet’s musical footprint in the opening and with the percussion in particular. I even caught hints of the slap bass that makes Soul Blazer‘s soundtrack so fun but more restrained and integrated within individual songs.

One other feature in the music that supports its cohesiveness is how Koshiro reuses certain melodic strains to highlight the connections between different dungeon areas or between a dungeon area and its respective town. Just as the Harmonious Music is integral to developing multiple towns and saving the world in the game, this music is the heart of the ActRaiser world. When seen as a part of that dynamic system, and especially when it becomes interactive based on the player’s actions, the music becomes worth poring over even more 30 years later. That is, if your playthrough is successful and you don’t end up stuck in one area having an unbalanced musical experience stuck on one track. Unless that track is “Fillmore.” Always listen to that one.

The more I think about how to approach this collection, the more I find myself wanting to talk about ActRaiser the game. I’ve always felt that the early Enix/Quintet games’ music weaves seamlessly with the game environment and remains difficult to untangle and think about in isolation, but it’s particularly tricky in ActRaiser. I don’t know if it’s the little cherub, or just that the ties between the power of creation and music are robust in my brain or throughout pop culture, but whatever it is, listening to this music with some context makes it a very different experience. This familiarity makes that tonal dissonance a little easier to accept, which is fortunate because the vast majority of the soundtrack is standout work, more like a symphonic experience than most other game music during that time.

Perhaps the varied and boundary-pushing nature of the soundtrack helped it secure the early symphonic treatment. It’s been a symphonic subject twice in two very different time periods: 1991 (read our review!) and 2018. The latter rendition is presented in this collection, and it truly comes to life here. The original orchestral version was well received, and this one also spotlights the movement and dynamic contrast possible within this score. It shouts, it calls softly, it’s epic, it’s sorrowful, it’s peaceful. Many of the songs are presented as medleys, and the scoring and song choices in those cases are phenomenal. Thematically similar pieces support each other in ways not possible in the original soundtrack. Tracks like “Birth of the People/Level Up/Offering” and “Pyramid – Marahna/Aitos – Temple” in sequence set good momentum and make the recording feel like a single heroic journey. This part of the collection alone makes it worth having, even if Nijūhachi Haneda is a different arranger than Koshiro himself.

With a collection like this, it’s always challenging to decide whether to get the CD or vinyl version, especially with the many extras/odds and ends available! I opted for the CD version because it includes all the fabulous new artwork (last sidenote about the cherub, but look at him on the back cover above!) and previously unreleased tracks on the OST side. It would be nice to have the larger-scale artwork and to have the symphonic suite on vinyl, but the insight gained from the unreleased tracks made the CD version worth it for me. There are 13 of them, and only some are alternate versions of music in the game. For those alternate tracks, there is a sense of progression between those and the finished tracks. Many sound like milder versions of their well-known counterparts with a more uniform sound, so it’s an interesting glimpse of what could have been. I’m also happy to learn there’s a track named “Space Fight” track, which is certainly the song intended for ActRaiser‘s final star-filled battle.

On the whole, there are benefits to either version, and Wayô Records has put care into the complete set. I enjoyed reading through the liner notes and seeing the devotion and hope for the future that Koshiro and the symphonic team convey there. There’s also a considerable decrease in typographical and grammatical errors between this and previous releases, which is always extremely good to see. Looking at the beautiful renditions of the platforming side of ActRaiser in the artwork is a joy, too. I think the art looks especially good on the discs themselves! If you’re at all a fan of ActRaiser, you’ll likely want to join in this experience and support this endeavor. If you’re unfamiliar, that symphonic suite and the enthusiastic words of the musical team might convince you to give the game a try.