All Sounds of SaGa 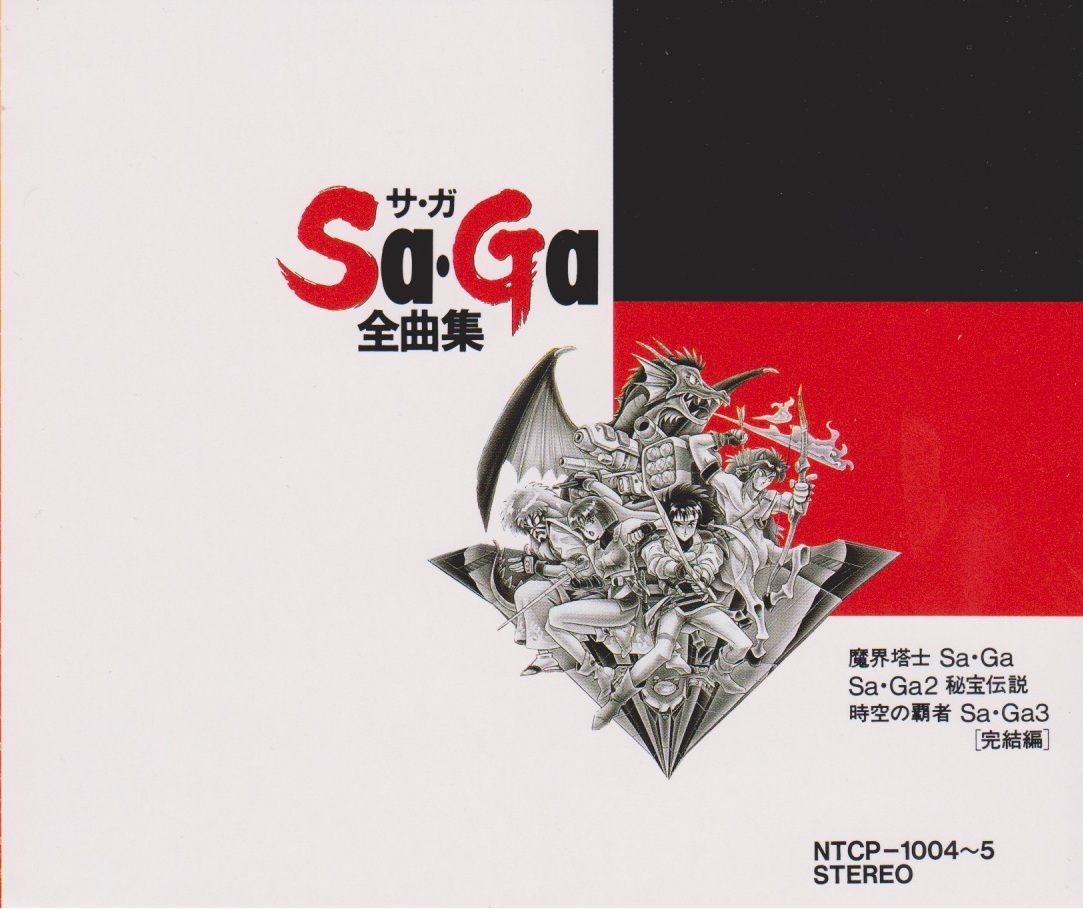 All Sounds of SaGa is a compilation OST, containing all the original tracks to SaGa 1-3 (or, in America, Final Fantasy Legend 1-3), as well as one arranged track of songs from the first SaGa. SaGa 1 and 2 were co-composed by Uematsu and Ito, and the less-impressive SaGa 3 was composed by Ryuji Sasai (who is one of my favorite unknown composers) and Chihiro Fujioka (who, as far as I know, has composed music for Square again).

The best Game Boy soundtrack ever? How about, the best composition for a videogame soundtrack?!? It may sound ludicrous, but I stand firm in that belief. Considering what they had to work with (three different synth voices could run at the same time, and they all sounded pretty similar) they created one heck of a soundtrack. Case in point, disc 1 track 14 (last boss of SaGa): what lacks in synth quality is made up for, in a sense, with quantity. What I’m talking about here is the EXTREMELY fast runs of notes that play as one of the three synth voices. Through what I would consider the first part of the song, this part is running in 16th notes… but by the second part, it’s running in 32nd notes (and it’s not just a trill, the notes are spread out and they sound GREAT). And is it only possible for a fast song to excel? No sir! “Wipe Away Your Tears,” now a staple in the SaGa series (a total of five original soundtrack versions of this song exist), this song is an amazing work as far as composition goes, better than most of Uematsu’s trademark “sadness” themes in the Final Fantasy series.

At this point, I am honestly led to believe that very few original soundtracks have as much composition merit as this one. Perhaps it was the limited resources that allowed the composers to focus on what is most important… if so, I think most OSTs should start on Game Boy-quality sound systems and then build from there. Either way, this is still one of my favorite soundtracks to listen to, and no one can deny how awesome this is for Game Boy.

The arranged track at the end is somewhat disappointing, especially if you were expecting an orchestral piece similar to Romancing SaGa 3: Windy Tale. It’s nothing more than a higher-quality synth medley. It’s good… but it really isn’t anything special.

The booklet with this soundtrack has some very neat artwork that American gamers missed out on. There are pictures of main characters throughout the series, as well as major villains and monsters that reappeared throughout the series. This was a very special surprise for me personally, because I love these Game Boy games.

Like the other two one-print-only Square soundtracks (Hanjuku Hero OST and Final Fantasy Mystic Quest OST), this soundtrack has become VERY rare. A standard price for it is $60, varying drastically with higher prices, and there are also some lower prices (the lowest I’ve ever seen was $45, which is what I proudly purchased mine for). eBay is your only chance, friend: Good luck!

Editor’s Note: long after the writing of this review, NTT inexplicably decided to reprint it, so now it is more readily available!