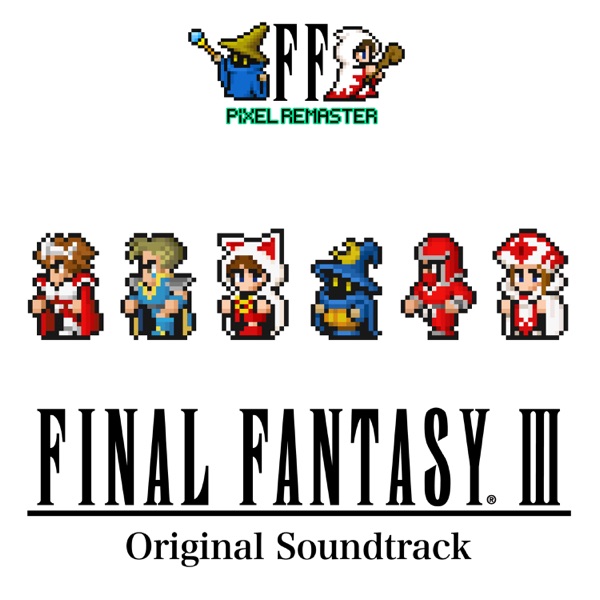 When all my news and social media feeds blew up with praise about the music in the Final Fantasy Pixel Remaster titles, I falsely assumed that these would be amped-up chiptune arrangements. After all, if the goal of these remasters was to make a sort of high-definition experience of the original pixelated games, wouldn’t the music be upgraded within the framework of triangle waves and synthesizers?

As it turns out, no. And frankly, I couldn’t be happier with Square Enix’s choice to go all-out with these heavily upgraded OSTs. For me, this is especially true with the Final Fantasy III Pixel Remaster Original Soundtrack.

For those still unaware, the entirety of the FFPR series (entries I through VI) has been arranged and performed primarily with real instruments: chamber-style winds and strings for softer pieces and rock-band setup for battle themes. Recording took place at studios in Osaka and Tokyo, and certain musicians prepared some solid at-home (“off-site”) recordings. Thinking about it more clearly, the fact that these arrangements came together during a global pandemic is a minor miracle.

What makes Final Fantasy III stand out among the bunch? For one thing, consider the music’s history. Initially written for the Famicom (NES), this was Uematsu’s last work for the console, and he took things to the limit. There is no question that some of the best music written for the three-channel-limited console is from this OST. It was brilliant, though some tracks shone more brightly than others. We’ll get to those.

A full 16 years later, Final Fantasy III received a hefty remake for Nintendo DS along with a new sequence-synth OST. The DS isn’t exactly known for boasting high-quality audio, but the source compositions helped carry the weight. Again, there were stars in the sky, wheat to be sifted from the chaff. If you know this soundtrack, you know what I’m referring to: “The Altar Cave,” “Eternal Wind,” “The Boundless Ocean,” “Priestess Aria,” “Doga and Unei,” “Last Battle.” These tunes were amazing on the original NES game, and they managed to stay amazing on the DS. The rest? Not exactly forgettable, but they weren’t exactly something to celebrate either.

Another 16-year jump (that’s 32 years total for those keeping track), and we’ve reached Final Fantasy III Pixel Remaster. Do the new arrangements of the aforementioned “star” tracks hold up? Oh, they absolutely do. These pieces were always ready for small ensemble recordings, as evidenced by the old Final Fantasy III Legend of the Eternal Wind arrange album. But now, for the great news: the rest of this soundtrack has drastically improved, exceeding my expectations for this remake OST. If a rising tide lifts all boats, the arrangers and performers for this album lifted all the source material!

And when you look at that list of arrangers, that’s a fairly impressive feat. That’s the kind of list that makes me think, “Too many cooks spoil the broth.” Not so, friends! While some arrangers go for a vanilla transcription and others take some creative risks, everyone holds to a certain cohesive integrity that celebrates Uematsu’s masterful compositions.

Some additional tracks that really stood out to me were the ones that I truly overlooked in previous incarnations but stand out in their Pixel Remaster form: “The Living Forest,” “The Ancients,” “Castle Hein,” “Battle 2,” “Saronia,” “Sunken Temple,” and “The Crystal Tower.” For me, these are the new shining stars, music that comes to life with these high-quality arrangements and equally impressive performance, recording, mixing, and mastering. The care and attention to detail bring the music to life: decorative flourishes, dynamic shifts, and melodies passed among varying instruments seamlessly.

Finally, we ought to pay attention to the album length. This soundtrack’s NES and DS incarnations clocked in at a reasonable hour-ish length, fitting on a single CD. This digital-only release fills a full two hours! How? Why? There aren’t any new compositions. For the most part, it’s an extra loop in each tune. But these “loops” aren’t mere copy-paste ordeals: they are extended arrangements that sometimes come with variations of their own. I found this particularly noticeable in “The Boundless Ocean” and “Doga and Unei.” The extended time is not artificial: there’s something new the second time around.

In summation, I wasn’t expecting this at all. The entire Pixel Remaster music collection is a stunning experience. But for me? The biggest and most lovely surprise was here, with the oft-overlooked Final Fantasy III. Uematsu’s legacy is secure when it is honored and celebrated with such high-quality arrangements. Now, excuse me while I put “Eternal Wind” on eternal repeat. It’s just that good.