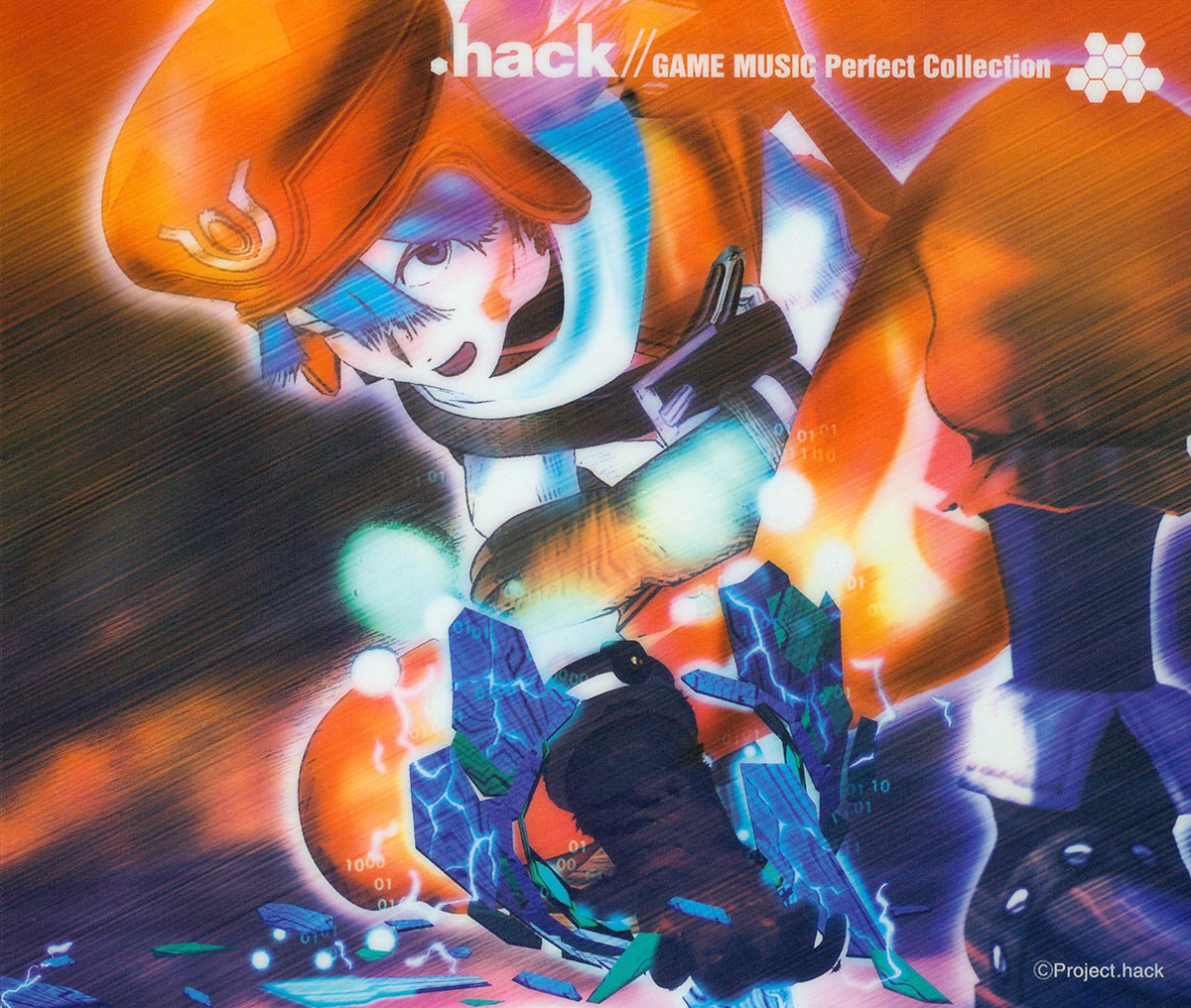 Before reviewing the music, I do feel obliged to clarify all the packaging issues between the special edition and the regular edition. If you get your hands on the special edition, you are blessed with one of those mini-CDs which includes 57 ten-second tracks with sound effects from the game. I’m sure that’s an incredibly enjoyable listen…I think it also comes with a poster or a sticker or something along those lines. The regular edition isn’t a big loss from the limited edition. If you ended up with a regular edition, don’t feel bad. I didn’t.

I first heard the music from the .hack// game series while hanging out with a friend. He was playing through INFECTION – Part 1, and while watching him I began to see why the game was so successful. It was FUN! I hadn’t had FUN with a videogame in a long time. I played some of the game, and I found myself in love with the music. So, the first chance I had, I put some money in the bank and went searching for all the .hack// soundtracks I could find.

Oddly enough, I could only find one game-specific .hack// soundtrack: the GMPC…a two-disc “best of” from the four games. I wanted to get one-discs for each game, but it seemed to be the case that separate OST releases for each of the four parts simply didn’t exist. So, I’d go with the “Perfect Collection”…which bothers me, as the definition of “perfect” is “complete,” and technically this is incomplete right? I’m not sure actually. The name-number system for tracklists would suggest that.

Oh, there’s an issue with the packaging. The tracklist comes in a database format…a filename and a description. The “filename” is the name-number system in English. What’s in parentheses or just right of the filename is a description, listed on the back of the case in Japanese. Quite a complex system for tracklist if you ask me. Whatever.

The artwork in the packaging, might I add, is awesome. Lots of red/orange. The booklet is filled with interviews and such, the likes of which I cannot read. I wonder if that’s interesting. What I wouldn’t give to be fluent in Japanese…on to the music, finally.

A good way to describe the music is “techno meets opera,” which has been done before. But it’s better than that. Honestly, the themes to this game are GOOD, though they are repeated often. The battle music is pretty much the same bit again and again (using the same synths), with little variations throughout. The town themes are very diverse in scope, and are probably my favorite tracks on the first disc. In general, though, the first disc is kind of bland, due to the repetition of musical themes. But the SECOND disc…wow…

The second disc features a lot of “special” music. Themes that play during cutscenes, songs that will only play at one particular point in the game (such as opening/ending themes)…that kind of stuff. It isn’t the background music for gameplay, this is the “good stuff.” This disc is the epitome of .hack// goodness.

The “bonus” tracks aren’t very good…too happy for me. The “loop” tracks (which are game intro tracks) are the best, especially those that incorporate Japanese speaking (like the “Voice Mix Arrange” popularized by Mr. Sakuraba’s most recent endeavors). The string themes are also…well, beautiful. Some of them use what sounds to me like German vocals, though I’m once again not positive.

And all of this coming from a soundtrack-reviewing veteran who has barely played the game. If you are into the .hack// series, I have to ask, why don’t you own this? It’s suitable for driving, doing homework, sleeping, and waking up (as well as playing over games with poor soundtracks). I was absolutely surprised by this whole phenomenon, and the game’s music is no exception.

So, as always, be SURE to listen to the samples provided, and make a decision for yourself. If you’re not a .hack// fan, you probably won’t like the music either. If you’re into techno or any form of “computerized” music, and you like the fusion of classical with modern, the musical style fits your tastes well. That’s all I have to say then. Thanks for reading. I guess. …