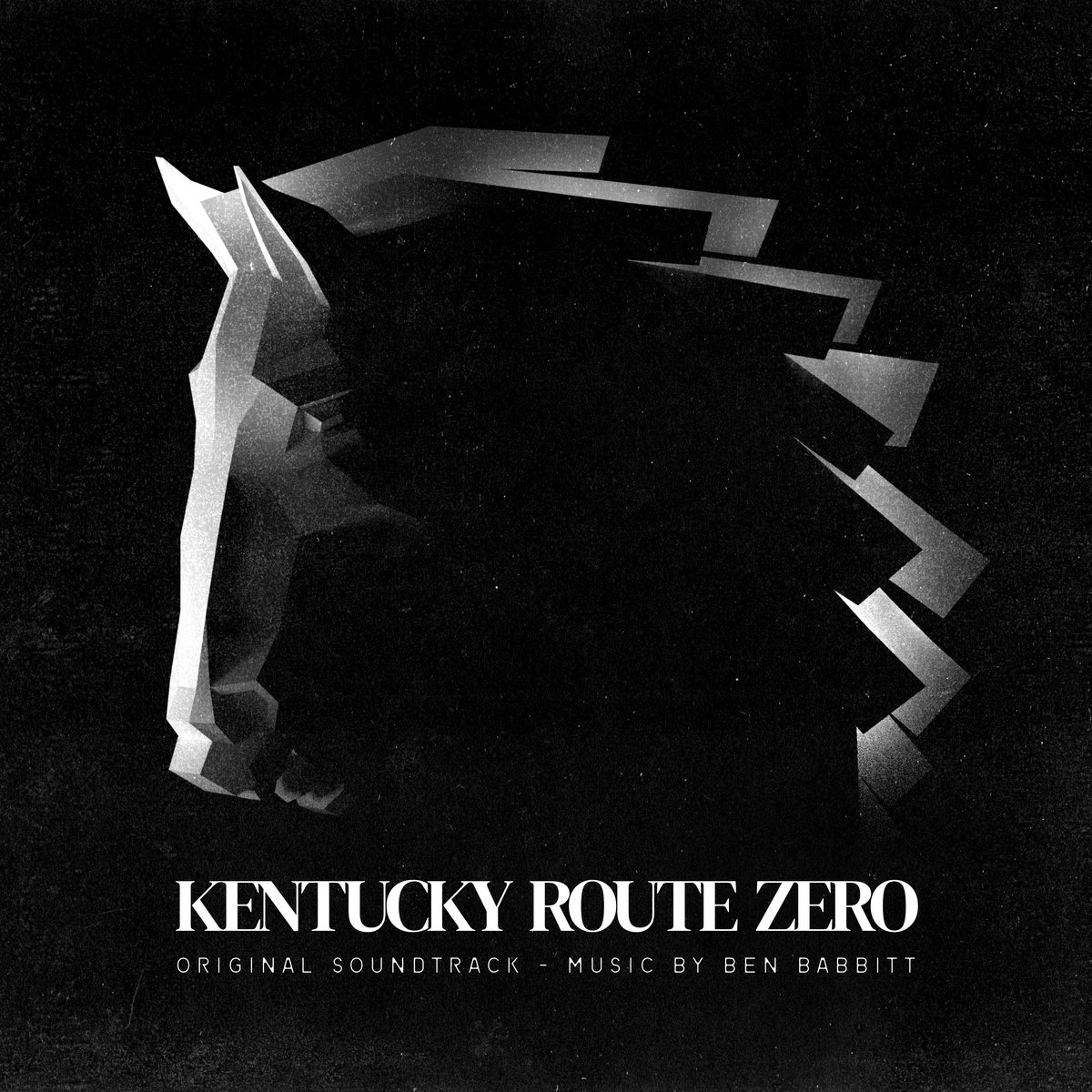 Kentucky Route Zero’s wispy daydreams flicker with black and white fragments echoed through time. There’s a rhythm and a logic to the acclaimed game, but it doesn’t quite adhere to our spacetime continuum as our collective reality is refracted through prisms to the point of only faint recognition. Signposts fade away and we’re all left with sweeping gestures and abstractions of emotions and visceral noise, and oh, is the noise grand.

The immense soundtrack unfolds according to the game’s five acts, in the order in which each episode debuted, and therefore has a sense of traditional structure. But that anchor quickly dissipates into the ether as ambient noise makes way for down-south praise with the iconography of God in heaven, all before morphing back into subdued sonic fractals. There are no demarcated boundaries between regional tradition and art toying with the edges of existence in this collection of songs.

The instrumental intonations of composer Ben Babbitt are truly stunning throughout Kentucky Route Zero. At times intimate and at other times sweeping in scope, Babbitt encapsulates the moments of inward-facing reflection alongside the drama of protagonist Conway’s journey. Album opener “The Stars Drop Away” is a dewy, delicate meditation with an otherworldly cadence. It offers boundless potential that’s echoed on tracks like “Julian” where ethereal keys are held tight, unrelenting in their acceleration toward eternity. Songs like “5 Dogwood Drive” make for ambient daydreams, unearthing undercurrents of pure catharsis, while others like “To Love a Red Moon” are nostalgic for a moment beyond memory. Much of the work here is simultaneously celestial and subtly personal, existing in an everlasting duality of as above, so below.

There’s also drama, depressive tendencies, and sprinklings of tension in Kentucky Route Zero’s soundtrack. Enter the sonic foil of spectacles like “Xanadu” where hair-raising synths invite a sensation of overwhelming, inescapable dread. Other cuts like “Angel Wings” personify the gray cloud of a mental lethargy that drags down both the body and mind, while “The Arrival” has a harsh resonance to its mystifying atmospherics. These inflections throughout Kentucky Route Zero make for an intense reminder that this world isn’t just an idyllic daydream, but an exploration of all aspects of the psyche. Emotions are fluid and will inevitably, at times, settle into the unsettling.

Throughout the tracklist, the fictional folk band playing real folk traditionals gives the Kentucky Route Zero soundtrack a sense of place that’s otherwise lost to a logic-defying plane. “What Would You Give” serves up country-fried questions on eternity as The Bedquilt Ramblers vocalist Emily Cross asks, “Oh, if today God should call you away/What would you give in exchange for your soul?” Later in the soundtrack, “This World Is Not My Home” finds The Bedquilt Ramblers crying out, “If heaven’s not my home, oh Lord, what should I do?” and I’m not sure if there’s any logical response to any of the Ramblers’ questions. Peering into Kentucky Route Zero’s void consistently conjures more inquiries than answers. Humans have spent millennia on the God question and a conclusion doesn’t seem much closer than when we started.

Looking at the two seemingly opposing sides of the Kentucky Route Zero soundtrack — the grand, voiceless swells of cuts like “Ghosts in the Static,” and the hymns of those like “You’ve Got to Walk” — are they so different? When the latter proclaims, “You’ve got to walk that lonesome valley/You’ve got to walk it by yourself,” the loaded iconography conjures up the same feelings as its instrumental predecessor. Even with companions, in the world of Kentucky Route Zero, Conway is decidedly on an isolated path, lyrical implications or not.

This brings me to the first person, because I’d like to end with an anecdote on how the soundtrack deepened my appreciation for Kentucky Route Zero. During my first playthrough, I thought a lot about Conway’s succumbing to alcohol later in the game and how its implied inevitability deeply bothered me. Do we not have a choice? Even as the world crumbles around us, isn’t there another way out besides the bottle? This conclusion was indeed distressing and even made me put down the game for a period, but as I listened to the soundtrack, I couldn’t stop thinking about those lyrics of “You’ve Got to Walk” — specifically “that lonesome valley” — and the subtext they imbue the game with. Someone once said the opposite of addiction is connection, and when alcohol comes calling for Conway in Act V, there’s nothing stopping him from a drink. In this mystifying suspension between dream and reality, as the Bedquilt Ramblers proclaim, he’s walking that lonesome valley alone.