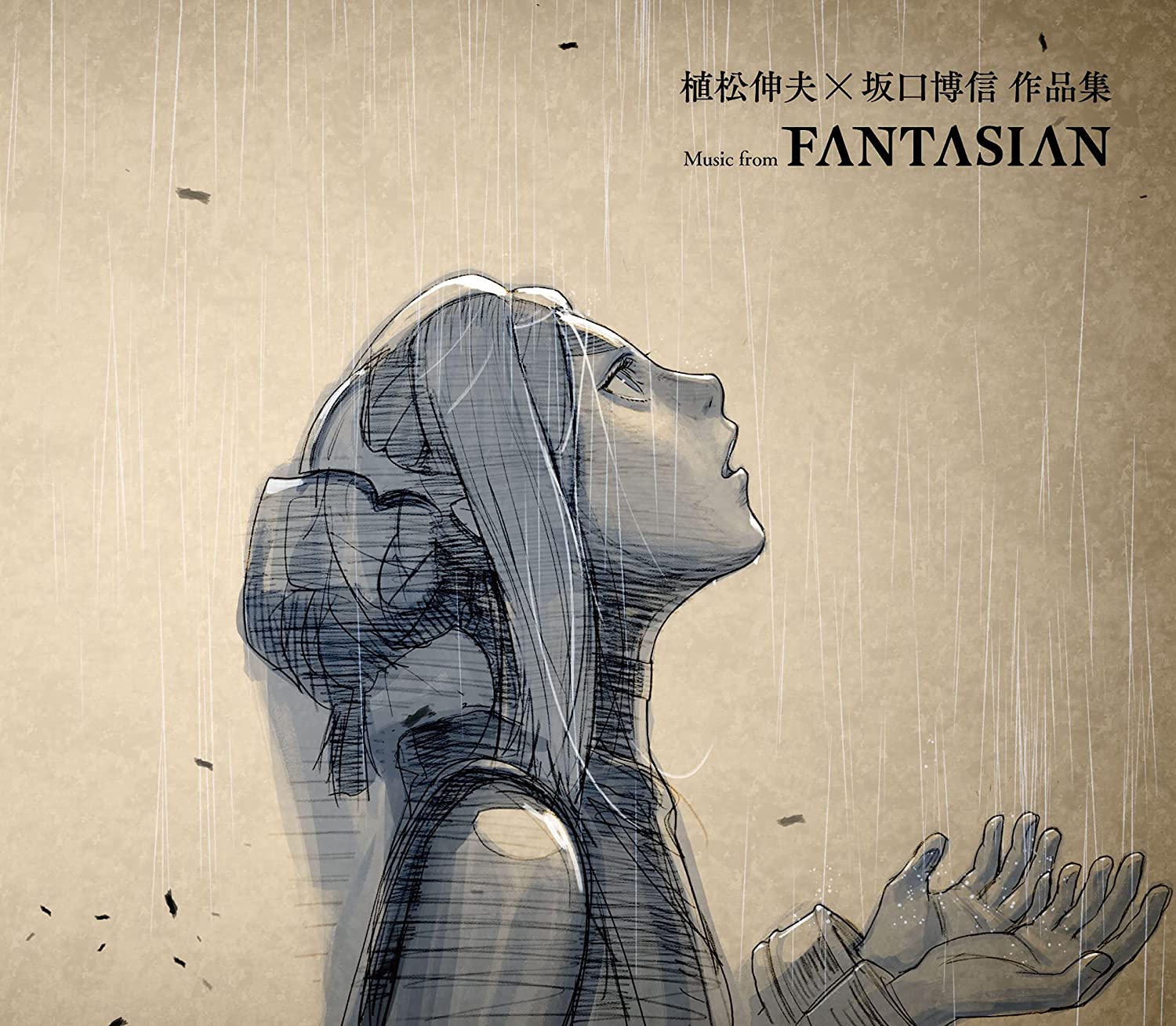 Fantasian is a labor of love. This is immediately evident in practically every aspect of the game, from the diorama backgrounds that evoke pre-rendered PS1 RPGs to the charming characters, tactical turn-based combat, and classic story of a rag-tag bunch of heroes saving the world from a genocidal god. There’s a remarkable nostalgic quality to the soundtrack that completes the package, and as I played through the game, I found myself realizing that I had missed listening to Nobuo Uematsu’s music. The Final Fantasy composer is in fine form on this album. Heartfelt emotional themes, soaring boss music, even some goofy tunes used for comic relief — Fantasian has a little bit of everything, and it’s at once both fresh and familiar.

The “Main Theme of Fantasian” sets the tone for the soundtrack and can be heard in several other pieces throughout the album. It has a retro sci-fi feel to it in the first track, heavily relying on synths and featuring a melody that seems to perfectly set the stage for a grand adventure. When it appears later in the soundtrack, such as in “Stormy Sandseas” or “Thunderous Mountain,” it is orchestrated, and that duality of instrumentation is a particularly noteworthy feature. Uematsu has shown in the past that he is not afraid to mix electronic synths and full orchestration, and this eclectic technique is on full display in Fantasian.

Consider, for instance, two back-to-back tracks that could not be more different in presentation. “Teardrop” is an emotional piece of music that utilizes a few strings and woodwinds at first, then eventually a whole orchestra, to create a beautifully sad yet hopeful melody. But “Junkyard,” the very next track, is a piece seemingly crafted out of electronic noises and sound effects— bleeps and bloops strung together in a way that at first just sounds like noise but eventually becomes a theme. Though this blending of real and artificial instruments is a technique that Uematsu has been fond of for a while, I feel like it has special meaning in Fantasian. Just as the game itself is an intended callback to RPGs of the ‘90s, so too does the soundtrack feel like an intentional reference to video game music of the same era.

With the general feel of the soundtrack established, let’s talk about the different kinds of music you can find in this album. Area themes include towns and dungeons, and while both have tracks that feel typical for the category — such as the sweet and peaceful “Frontier Town” or the mysteriously wistful “Forest Light” — there are pieces that do some interesting and unexpected things. “City of Water,” for instance, is the theme for a port town that is meant to resemble Venice. As such, the music itself employs a sort of echo technique with layered and slightly delayed notes that emulate the sound of dripping water, and even the synths chosen to create this effect sound like something breaking the surface of a lake or pond. This concept carries over to “Mechteria,” a dungeon theme in the same area that uses multiple overlapping and distorted piano lines to create a similar, yet more haunting echo effect that feels like an appropriately twisted reflection of the town theme.

One of the best tracks on the album comes from an entirely optional area that some players may not think to visit. “Shangri-La” stands out thanks to its catchy, hummable vocal theme. There are no lyrics in this piece — only gentle “la la la’s” — but that doesn’t keep it from being memorable. There’s a kind of madrigal-like quality to the theme, with a single vocal line breaking into a harmony of several voices that are occasionally a cappella but otherwise are accompanied most prominently by a guitar. It’s just a really pretty piece all around, especially for an optional area that is easily missed.

There’s a nice variety of cutscene music to accompany the various events that occur over the course of the game. From ominous villain themes like “Master of Order” to comic relief anthems like “Prickle and Clicker’s Theme,” the basics are well covered. However, it’s the emotional pieces that shine brightest. “Gravity” is a sweet yet melancholy piano piece that almost serves as a secondary main theme. It has special in-game significance and appears in several places, most notably in “Cheryl’s Theme” and “Departure.”

One of my favorite tracks is “Resonating Hearts,” a piece that carries a lot of feelings due to a particularly revelatory moment where it plays. I don’t want to spoil the in-game context, but I almost don’t have to; you can hear the story just by listening to the music. The opening staccato notes are quiet and simple, like the start of a fairy tale. As the rest of the orchestra joins in, things are happy for a time, until something bad happens and the drama starts to swell. The climax is a storm of emotion, and everything seems hopeless for a time, until the very end of the piece when things turn positive and hopeful again. This is one of those tracks that proves without a doubt that music is powerful and can transport you to places of wonder and imagination without the need for any other context.

If there is one weak spot on this soundtrack, it’s the battle music. “Dire Threat” just feels so out of place as the main battle theme; it sounds much more like an escape theme or something you’d only hear in specific situations. In practice, you hear “Dimengeon” a lot more often, and while that is a better track, it’s still not terribly catchy and doesn’t really have that spark that we’re used to hearing in Uematsu’s battle themes.

Thankfully, the boss music is almost entirely better, with some real standout tracks like “Great Battle.” The opening crescendo on this piece is fabulous, and I swear the main melody at the start is an intentional reference to Final Fantasy VIII’s “The Man with the Machine Gun” — the melodic line is just too similar for it to be a coincidence given they’re both composed by Uematsu. I wouldn’t put it past him to slip in some references in such a nostalgic game. “At Wrath’s End” is an utterly fantastic rock theme, and the final boss theme, “Rebirth,” is appropriately epic with a full orchestra and chorus that gets you pumped up for what is undoubtedly one of the most challenging fights in the game. A few boss themes are still basically okay, but overall, this climactic music mostly makes up for the lackluster regular battle themes.

There are also a few vocal themes on this album. “God Realm” is kind of wild and unlike anything else on the soundtrack; strident and dissonant vocals dance around each other, first a cappella and later accompanied by an increasingly jazzy and messy piano, bass, and drums. “Cycle of Nihility” is technically a boss theme, but it’s more of a story battle and the melody is fittingly sorrowful and subdued. Yuria Miyazono’s vocals are haunting at the start, and then the orchestra takes over in the back half of the piece for a sad but lovely crescendo that leads into the loop and a fade out. Miyazono returns for the final track on the album, “Kina (Destiny),” a piece that actually plays very early in the game yet works perfectly as a conclusion for the soundtrack. Delicate and wistful, the melody rises and falls in that magical sort of way that Uematsu is so skilled at when it comes to vocal themes. Overall, it feels right at home next to beloved pieces like “Eyes on Me” and “Melodies of Life,” and that’s perfect for a game whose pedigree and presentation is so clearly linked to classic PS1 Final Fantasy titles.

One final detail about this soundtrack worth noting is that the physical version includes an extra disc, which contains the soundtrack to “The Story of Blik-0,” a short story written and scored by Uematsu. Originally published in 2013 alongside a mini-soundtrack, this short story is accessible in Fantasian through a side quest and features a greatly expanded score (which is also available digitally as a separate album). 16 tracks musically tell the story of a robot given life by an aging professor who goes on a journey to learn what being alive is all about. As you might expect, there’s a variety of music to accompany this story, from peaceful and mischievous tunes to somber and hopeful themes, and all of it is decidedly synth-heavy, with some tracks even featuring sound effects like a radio drama. Aside from the main theme, only two tracks have unique names: “Ah, But Why?” and “So Close” are interesting in that they are both vocal themes, but vocaloids sing them instead of real people — likely an intentional choice given the story’s protagonist. I enjoyed the music when I read the in-game version of the short story, and while I do still like hearing it on its own, I feel like it’s really best experienced alongside the story itself.

As a game, Fantasian proves that you can emulate an old-school RPG style but also breathe new life into it and create something that feels both unique and nostalgic. As a soundtrack, Fantasian reminds us that Nobuo Uematsu is a treasure and his music is special, no matter what game he is composing for. If you’re a fan of his work, and I daresay that most reading this review are, you might want to check out this album, even if you haven’t played or can’t play the game. It may very well be one of Uematsu’s last full soundtracks, and while it is not without a few issues, its quality means it would be an appropriate finale for one of the most venerable video game composers of all time.