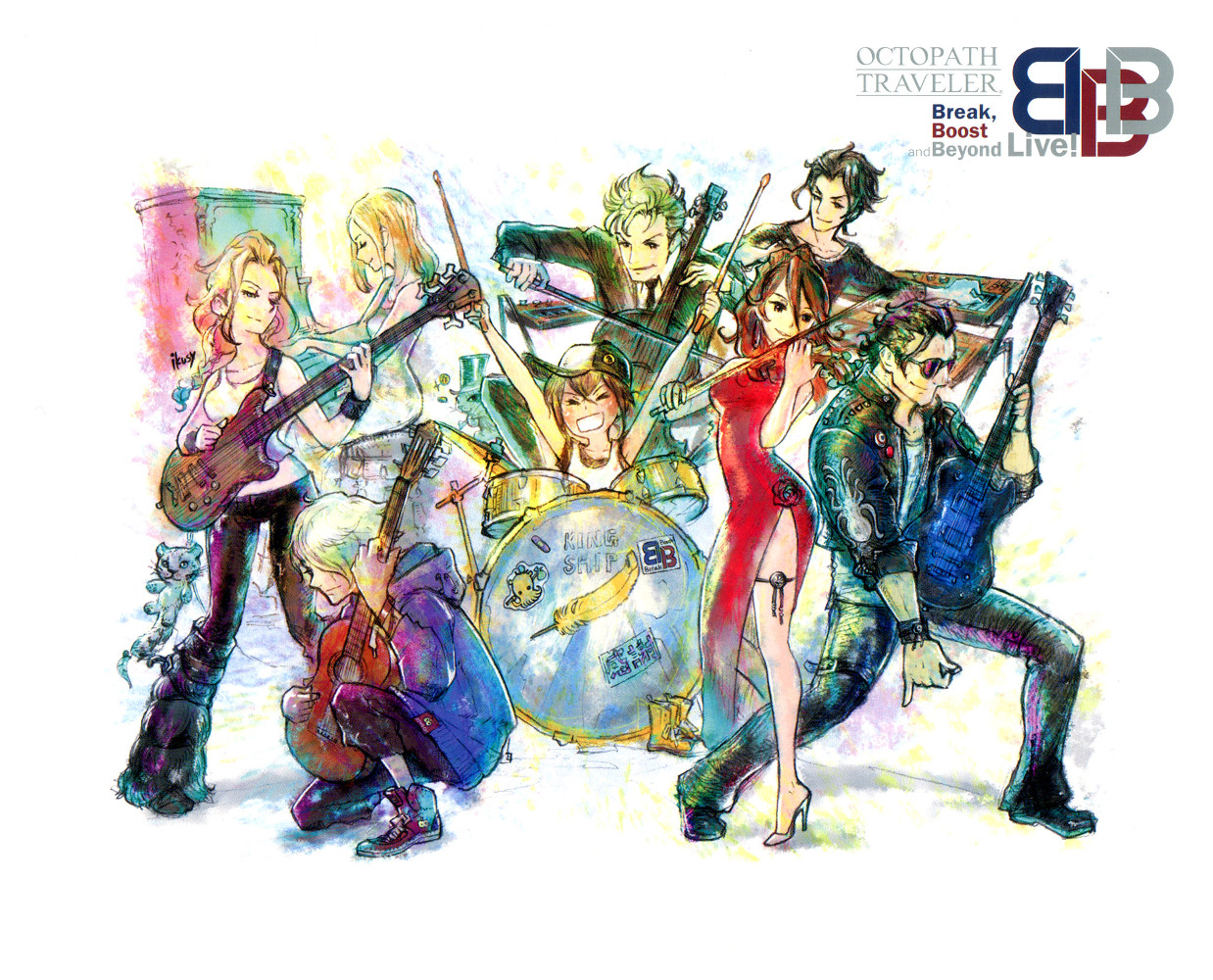 Note: All track samples are YouTube links with video footage. Watch them via links below or on our YouTube playlist.

Over the past five years, Square Enix’s music division has added a new product line to their commercial items: live music concerts, recorded and released on Blu-ray. Other publishers have been doing this for decades, even on VHS cassette. Having a high-fidelity format to work with and facing increased interest, Square Enix first dipped its toes into the market with the NieR franchise, eventually releasing Blu-rays for three separate concerts, all with unique arrangements and instrumental groupings.

Now, Octopath Traveler gets its time in the limelight. Using footage from an August 2019 concert, the December 2019 release Break, Boost and Beyond Live! utilizes arrangements from two previously-released studio-recorded arranged albums. The featured musicians include three guitarists, bass, drums, piano/keyboard, violin, cello, vocalist Mayu Wakisaka, and one killer multi-instrumentalist (Atsuki Yoshida on violin, viola, and clarinet). The full ensemble only performs a handful of songs, while most arrangements target a subset of the crew, referred to affectionately as the “BBB Band” (for Break, Boost, Beyond).

Throughout the concert, composer Yasunori Nishiki steps onto the stage to make a statement about the arrangements and musicians. At one point, he even does a short interview to promote the upcoming mobile game Octopath Traveler: Champions Of The Continent—after which the band performs a battle theme from the upcoming title. Unfortunately, as this is an import release, there are no English subtitles during these speaking sections. This is frustrating, since Square Enix’s North American e-shop is selling this item, and they had previously added subtitles for spoken-word sections of the more recent NieR concert Blu-rays. Nonetheless, it is nice to put a face to the name of one of the big up-and-coming names in VGM.

The major appeal for any fan who might consider this concert—even those who already own the studio arrange albums—is to see the masterful craftsmanship that each performer puts into this work. Outside of featured improvised solos, there is not much here that deviates from the studio arrangements, but that honestly doesn’t matter. Witnessing these musicians perform together with such tight-knit precision, sometimes at break-neck speed, is a miracle all its own. Atsuki Yoshida alone pulls out some mind-blowing performances on “A Settlement in the Red Bluffs,” “Daughter of the Dark God,” and the encore “Break Ver.” trio performance of “Decisive Battle II.”

When the whole BBB Band gets together, things tend to go to a whole new level. The concert’s pseudo-finale (before the encore) is the final environment music, “The Gate of Finis,” moving into the final battle theme, “Daughter of the Dark God.” The former piece has this mesmerizing minimalist pattern that gets traded across instruments while the occasional melodic tone passes overhead. It’s building to something big the whole time, and when the entire band hits those final notes together as if to say “let’s go,” they certainly have your attention. And, of course, the final battle arrangement is a face-melting, raucous experience. At the end, the audience claps for a solid two minutes before the band finally comes back for the encore performances.

Keep in mind, as with most VGM concerts these days, a projected screen behind the musicians displays footage from the game that would normally coincide with these themes. For concert-goers and viewers alike, this concert actually contains spoilers!

There is one piece where game footage is notably absent: “A Settlement in the Red Bluffs.” This arrangement is a wild hoe-down for the string trio accompanied by Ren on acoustic guitar, and it only makes sense that viewers should focus exclusively on the incredible musicianship of Atsuki Yoshida, Anzu Suhara, and Kirin Uchida. It’s a blast to take it all in, watching and listening as expert musicians send you to an imagined backwater town where home-grown musicians whip up a frenzied storm of powerful music.

I would be remiss to leave out Mayu Wakisaka’s vocal performance, saved for the final performance in the three encore pieces. Her addition makes the “Octopath Traveler Main Theme” a wholly new experience. More importantly though, is how the song is arranged by Nishiki. What starts as a flowing 6/8 rhythm turns into a pulsing 4/4 march in the final minute, and with each repeat of that lovely four-measure melodic strain, all players put more and more effort into their instruments, and the song builds into something bigger than you could have ever predicted. If you’ve played and love this game, this vocal finale may well bring you to tears.

Once again, my biggest complaint with this Blu-ray is that it is truly an import item designed exclusively for a Japanese audience. Not only are Yasunori Nishiki’s spoken word portions left without subtitles, there is a 48 minute “making-of” feature packed with interviews of all the performers, Nishiki himself, and other key staff behind Octopath Traveler. Though I acknowledge it would take a lot of work to translate all of that dialogue and add it as a subtitle, I suspect it would make for an easier sell in the English-speaking markets.

Nonetheless, if you’re looking for a true capstone experience with Octopath Traveler, I cannot imagine a better choice than Break, Boost and Beyond Live!