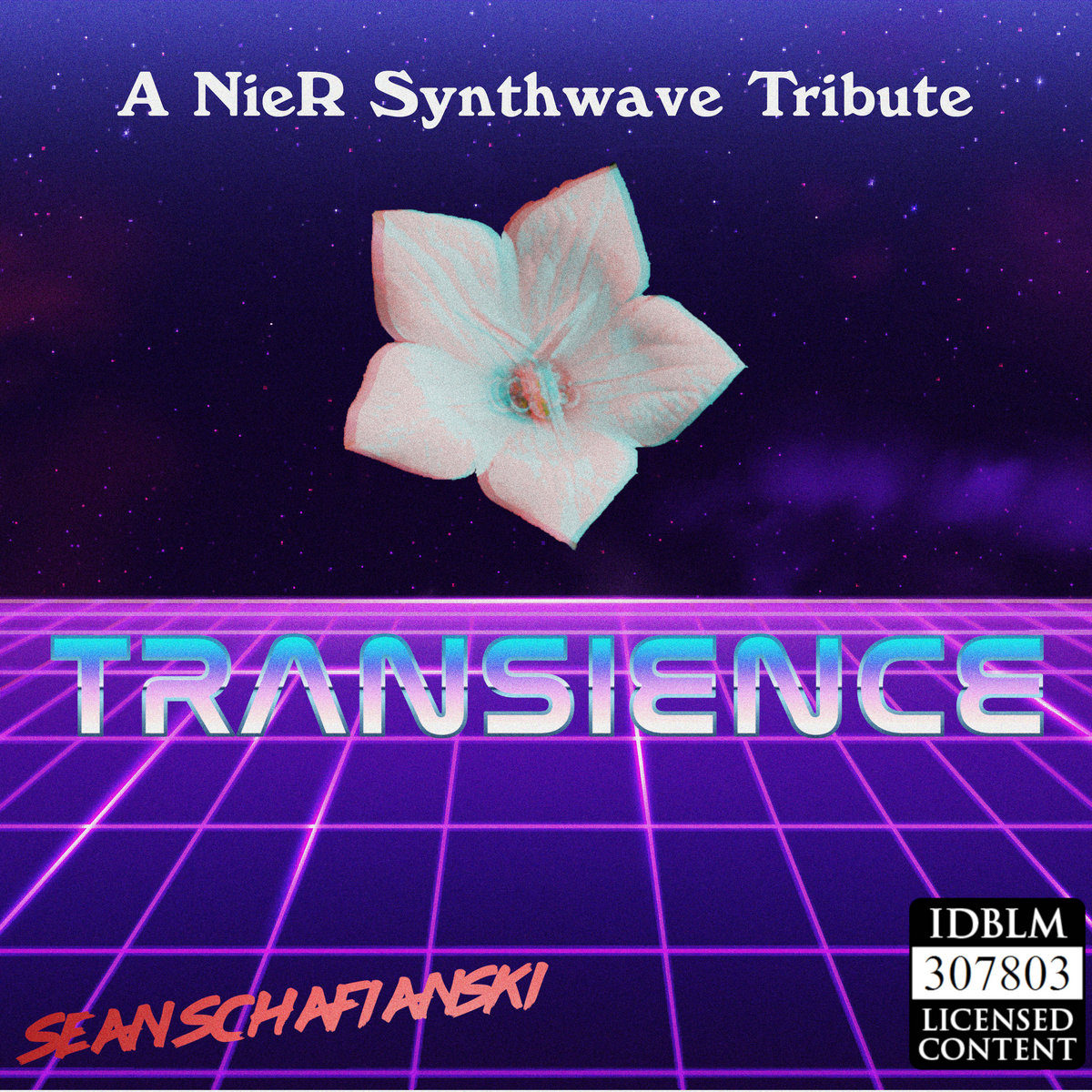 “Transient” feels like a pretty perfect word to describe the music of NieR. This might sound strange, but I challenge you to listen to even one song from the game and tell me there’s not something ephemeral about the music. Every track on both the NieR and NieR: Automata soundtracks have this ethereal quality, where the vocals pierce through you. With every piano key that echoes and every draw of the bow on the violins, I feel like my soul is being plucked out of my body just to hear new sounds or feel new emotions. They’re transient feelings that I experience only when I listen to this music.

I find synthwave extremely difficult to describe for similar reasons to NieR‘s music. I can easily slip into a trance where I’m washed over by a fog of emotions, caused by sounds that create strange sensations that feel otherworldly. So when I sit down and think about it, synthwave might be the best genre at capturing that sense of transience. That makes Transience: A NieR Synthwave Tribute the perfect marriage, with the echoes and ripples of Keichi Okabe’s unimaginable soundscape only really matched by the strange, unnatural sounds of the 1980s.

For Transience, Sean Schafianski has taken a snippet of the original NieR‘s soundtrack and added a shot of ’80s flair, all with his own twist. It’s still unmistakably Schafianski though, instantly recognisable from the saxophone solo during “The Prestigious Mask” and the electric guitar in “Emil (Sacrifice)” that play over the steady drumbeat. The jazz flavour to the ’80s synth, bass and drum machine used throughout is what pushes this from being a fun experiment to being a great little tribute that feels wholly unique.

The main thing that really stands out to me is how the mood shifts throughout most of the songs (some more dramatically than others) without taking away from that transient, unmistakable NieR feel, with each track bringing its own mysterious qualities. This arrangement of “Grandma,” for example, is more energetic and dark than the original, but the unsettling, drawn-out synth notes that stand in for Emi Evans’ brittle and beautiful vocals still retain that ghostly feel to the song. Without actual vocals, this is as close as you’re going to get to the sound of her voice. Just like the original, every note of that melody reverberated through my ears, my soul, then melted away like snow in summer.

I want to go back to “The Prestigious Mask,” a track which is usually overlooked by arrangers but has always been one of my favourites. Okabe’s original is not particularly heavy or moody, but there’s an air of uncertainty and ancient mystery, which is apt for the town of Façade. Schafianski’s version again lightens and energises the music from the start; the song invites you in with chime-like notes and simple guitar chords, with the drum machine leading you into a peppy bassline and flute sound. The flute sound is close to the original’s own and keeps that sense of mystery and tradition alive. Here, and for the rest of the song, it’s the echoing synth and a steady drumbeat that quicken the pace. In this 1980s version of Façade, I hope one of the Rules doesn’t stop me from getting into the rhythm and bopping along to the music!

That’s not to say every track strays away from the mood of the original, as “The Ultimate Weapon” maintains the same melancholy, uncertain tone that the original has. It does this with much deeper, moodier synths compared to the rest of the album to increase the tension, much like the vocals and drums do in the in-game version. It’s probably the safest track on the album, but that doesn’t diminish the quality of how haunting and uncomfortable it is. However, I think where this EP succeeds most is making some bold decisions to invert the emotions of the selected tracks, while retaining some of the key parts of this small selection to ensure this is unmistakably a NieR tribute.

There’s always a danger in drastically altering the music you’re arranging, but if you’re familiar with Schafianski’s jazz albums, you should come into this knowing Okabe’s music is in safe hands. This small jaunt into the world of the 1980s has left me wanting more synthwave arrangements, not just for NieR, but in general. I adore this series’ music, but I would never call it easy listening, and I struggle to nod my head to the beat before I collapse under the weight of my emotions. Here, I can drench myself in neon lights and ease myself into a NieR universe where swaying and foot-tapping is all the more common, whether it’s in the peaceful ruins of a desert town, or an underground research facility. After all, neon and synthwave go hand-in-hand, and neon lights make everything better, right?