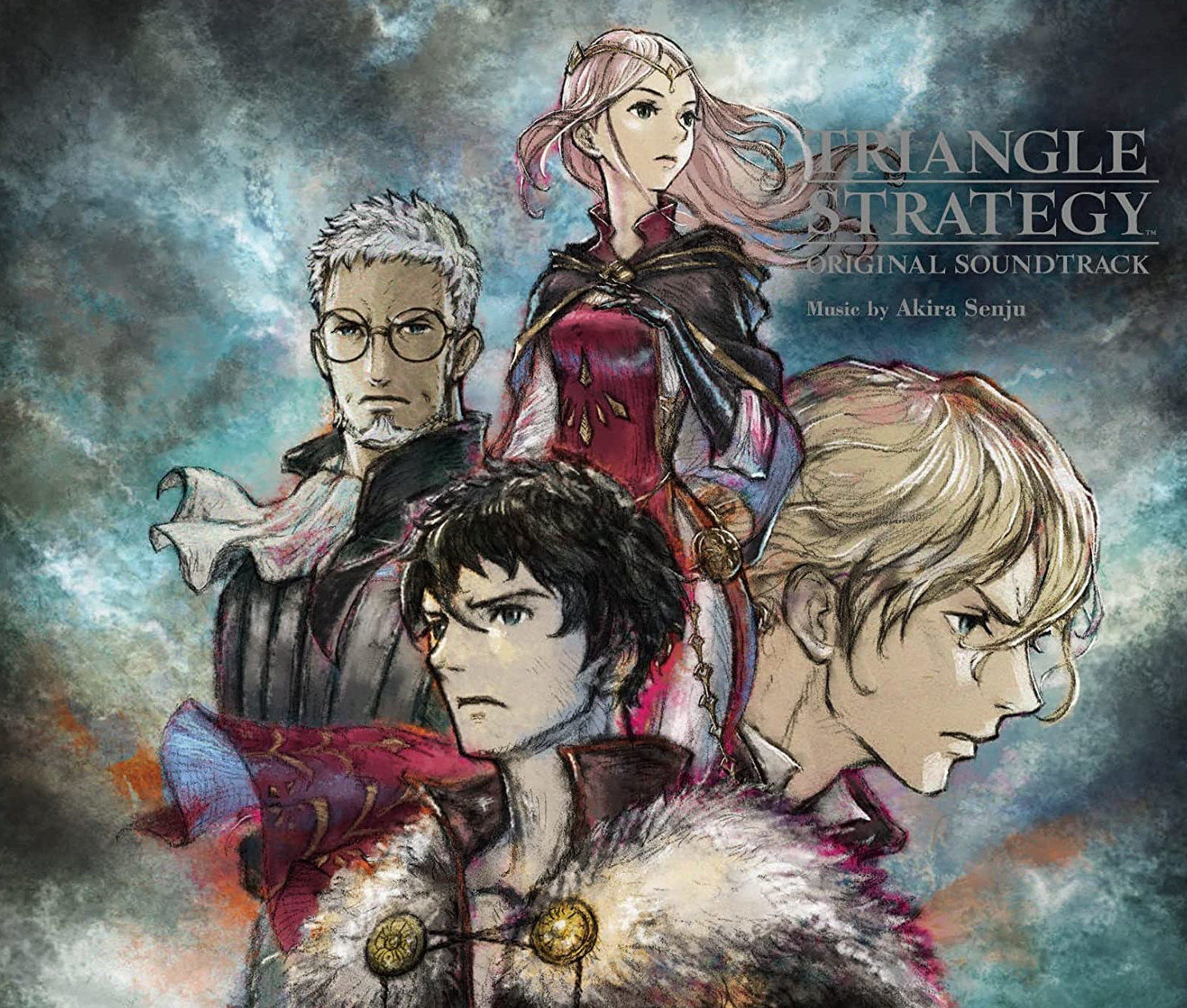 I went into the Triangle Strategy Original Soundtrack with a mess of confusing, mutually exclusive musical expectations. Seeing the HD-2D art style in full effect, my early expectation and desire was that Octopath Traveler composer Yasunori Nishiki would be working on this title. Nope! Another part of me thought, perhaps Square Enix would go all-out with the Tactical RPG tradition and bring on Hitoshi Sakimoto et al (Basiscape). Again, I was totally wrong. So, friends, let’s couch our expectations appropriately by first getting to know this composer.

Akira Senju has not had a prior full game OST. He is better known for anime and live-action TV scores, including Fullmetal Alchemist: Brotherhood. His orchestral style differs significantly from that of Hitoshi Sakimoto. A more traditional, classical approach is taken with many of these compositions, something more akin to Kentaro Haneda or Koichi Sugiyama. That being said, a “pop orchestra” sound peeks through at times too. None of this is good or bad; if anything, it may better align with the art style and gameplay.

Over 60 musical performers recorded for this soundtrack, including the venerable Haruki Mino on piano. A younger me would have craved such high production value on a JRPG. This soundtrack, more than any I can think of in recent years, has caused me to wonder if I have become spoiled. Any game with a good budget for music gets the orchestral treatment these days. But none of that means anything if the composer doesn’t bring something powerful to the mix.

And for the most part? I would say that Akira Senju’s Triangle Strategy soundtrack is a perfunctory one. It feels as though it was written to serve a purpose. Which, I know, sounds like a stupid thing to say. All game soundtracks were written for the purpose of providing a musical context for their related games (licensed music placed aside). But after multiple listens through the soundtrack, and significant time spent with the game itself, I find myself less enthralled than I expected or even wanted.

I offer to the reader two caveats to my lukewarm response to this soundtrack. First: maybe there’s just something I’m missing. Perhaps this is the kind of OST that has to grow on you. I was roundly criticized by peers and strangers alike when I had this same lukewarm response to Hitoshi Sakimoto’s Final Fantasy XII Original Soundtrack. I have no intention of rewriting that 15-year-old review, but I am happy to report that I truly love that full OST now. It simply took a long, long time for it to settle into my mind. Perhaps the same will prove true for Triangle Strategy.

My second caveat is that, while I find myself generally disinterested in this soundtrack, there were some truly pleasant surprises that stand out. Many of them shy away from full use of the symphony orchestra, working with smaller “chamber” sub-groupings. For example, while I was not fond of many of the combat themes, “Combat -Mines-” had me sold within the first minute. Many of Senju’s other compositions build from a place of classical harmony, through chord progression and, yes, through dynamics as well. But “Mines” starts with minimalism and builds through instrumental layers, even bringing the choir into heavy use. Simple, smart, effective use of the tools available to the composer always impress me. And as “Mines” continues, it only gets more interesting. Then there are battle themes like “In One Fell Swoop,” which is essentially a rock-orchestra hybrid piece, the solo electric guitar getting equal place in a mix filled with booming brass and soaring strings. The pounding drums make a difference here as well.

In fact, when I look at the common denominator behind the songs I most enjoy from Triangle Strategy, percussion may be the key. I adore “Idore Delmira” and “Until That Day -Frederica’s Battle-” as well, and I think the heavy backing of the percussion goes a long way for me here. That being said, there are two pieces devoid of drums that I really enjoyed as chamber music: “A Bright Banquet” and “The Grand Duchy of Aesfrost.” And I won’t hide my feelings here — these two songs remind me of Octopath Traveler. This is the closest Senju gets to channeling Nishiki’s scene/environment music, whether intentional or not.

The Triangle Strategy soundtrack is available as a 4 CD set, though it is also available digitally. However, its digital iterations separate the final track, the vocal “Song of TRIANGLE STRATEGY” as its own publication from the other 70 tracks of the OST. If you think I’m either out of my mind for dismissing the bulk of this soundtrack’s content, or perhaps you’re like me and hope it will grow on you over time and with subsequent playthroughs of the game itself, you may want to add this massive set of music to your collection.