...it's hard not to love a game where you can drink milk coffee from a vending machine one moment, and then pilot a giant mech the next. 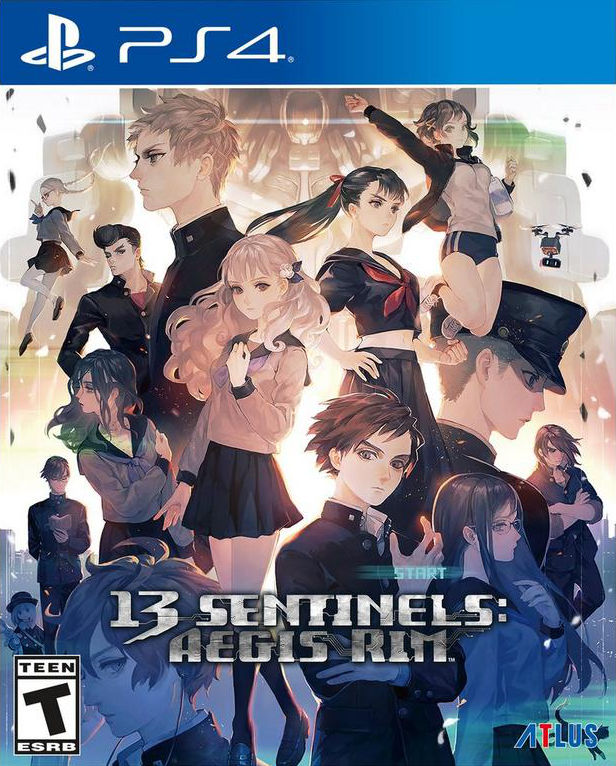 When asked about his ultimate goal in a 2009 interview, Vanillaware president George Kamitani said that he’d like to create a game that “…implements everything I like about video games — a little RTS, a little action, a decent story. If I can find the perfect mix of every aspect I like and be happy with it all, that would be my ultimate title.” 11 years later, this quote sticks out to me after beating Vanillaware’s latest game, 13 Sentinels: Aegis Rim, a sci-fi-inspired visual novel with RTS gameplay and a dense story. “A little RTS, a little action, and a decent story,” if you will. But even that severely undersells it because there’s really nothing else like 13 Sentinels, an epic that relishes in the everyday and allows its characters time to breathe and reflect.

On the surface, the story is about 13 high school students and their everyday lives in 1980s Japan. Each of them can summon a Sentinel, a giant mech, and they must use this power to fight off the kaiju, an unknown force seemingly sent by an alien race that threatens the world as they know it. But even in the prologue, it’s clear that things aren’t what they seem.

The opening section of the game cycles you through 7 of the 13 characters’ prologues, swapping between visual novel and RTS gameplay segments. After this introduction, you can pick between three options on the main menu: Destruction, Remembrance, and Analysis. Destruction is where all of the combat takes place, and Analysis is a glossary of terms that are unlocked as you progress through the game, and reading these will help you piece together the overall story. Remembrance is the adventure portion of the game and where the majority of your playtime will go.

The overall story is linear, meaning there’s very little choice and very little you can do to influence the outcome of events, which works in the game’s favour. Each character’s story starts at a different point, though many of their stories overlap. Upon reaching the end of one path, you can either return to that character’s story and explore another path, or move on to another character, and every single path of every single character has to be explored to get the full picture. The key to progressing is the Thought Cloud, where terms and character names are stored. Sometimes you’re prompted to use these words in conversation, and other times you need to select each word and listen to your character’s inner monologue. Most of these triggers are easy to find, but a few have very short windows to activate, and some require a bit of backtracking to figure out.

I loved being able to choose who I wanted to follow, or what I wanted to do, at will. Occasionally, you will hit a lock and need to progress another character’s story or go to Destruction mode to complete some battles, but the freedom to control the pace and choose what to do next helped me connect the dots more. For instance, if I was intrigued by a character who appeared in another’s story, I could move on to theirs for a bit to see if and how they tied together. And I think the stories largely tie together well, but I really had to take notice of what was going on, spend time reading through the logs, and rewatch cutscenes in order to fully grasp everything. I like that the game doesn’t go out of its way to spell everything out, but it’s definitely overwhelming and sometimes impenetrable.

A lot of this impenetrability melted away for me, though, because of the characters and how they interact with the world. I loved getting hotdogs and strawberry crêpes with Iori Fuyusaka, who has nightmares about the future, because it filled me with warmth every time. Seeing World War II soldier Keitaro Miura (who probably has my favourite story) brood over the cityscape of 1985 allowed me to catch my breath. Even though my jaw was on the floor at some of the mind-blowing things that happened, the experiences that stuck with me are the ones where I’m just listening to characters talk about their favourite films or their crushes. The Japanese voice performances are also astounding and make all of these characters seem believable. An English dub will be available when the game launches, and based on the little I’ve heard, it sounds solid.

While some stories and characters are so strong, I think they make the weaker ones stand out all the more. Megumi Yakushiji is one casualty; she’s a girl tasked by a talking cat to hunt down “witches,” but her obsession with another protagonist, Juro Kurabe, is the focus and soon drowns out the more interesting parts of her tale. Renya Gouto’s story, perhaps as a consequence of being one of the last character stories you can finish, felt more like exposition than meaningful character development. The content was vital to the overall story but delivered in a boring way.

The quieter moments also gave me time to fall in love with Vanillaware’s visuals all over again. 13 Sentinels, like their other games, is stunningly beautiful. Big, sprawling cities, apocalyptic wastelands, and futuristic structures aren’t things we’re used to seeing in the studio’s signature style, but coupled with the visual novel approach, it really makes you feel like you’re playing a shōjo manga. The glowing sunlight breaking through the wooden beams at Sakura High or the moon illuminating an apartment room made me nostalgic yet wistful for an era I’ve never lived in and a country I’ve never visited. Conversely, the muted colour palette of greys and browns while standing over a ruined city left me feeling empty and hopeless.

Basiscape, Hitoshi Sakimoto’s studio and frequent Vanillaware collaborator, have really outdone themselves in creating such a unique soundscape for each scene too. There are warm and uplifting tracks that accompany the more slice-of-life sections of the game, while gloomier tracks use much crunchier and inorganic electronic sounds to create an unsettling mood. But the multiple battle tracks are where Basiscape truly shines; heavy synths and electronic music are mixed with rising orchestral themes, motifs and vocals to create some intense combat music. The variety throughout the game is staggering, and it’s quickly becoming one of my all-time favourite soundtracks.

Speaking of combat, I wasn’t initially sold on the tower defense system when I played the prologue, but after being given the freedom to largely choose when I go fight, it grew on me. You can pick a team of up to six Sentinel users to take part in active combat, and the remaining characters will stand guard at the Terminal. Your goal is to defend the Terminal while wiping out all of the kaiju on the map. In the beginning, these sections did feel a bit mindless, as I could just power my way through fights without healing allies or putting up sentries or mines. But towards the end of the game, the difficulty really ramps up. Some fights have hundreds of different units on screen at once, and you need to actively watch where enemies will spawn, your party’s health, and the Terminal’s health too. This was a whole other level of overwhelming to me. It’s not too hard to pick up on everything eventually, but it definitely takes some time to adjust.

Each of the 13 characters level up and gain skills that are automatically activated in certain scenarios, such as putting two particular characters in battle together. You can also enhance your Sentinels by teaching them new attacks and upgrading their stats using Meta-Chips, which you pick up throughout the story and from combat. The game doesn’t really go into a ton of detail as to what each skill does, so you have to go through and read everything, which can be a chore. Working out what to focus on for each character, and each generation of Sentinel, takes a fair amount of time. First generation Sentinels are built for combat, so physical attacks and strength boosts are best, but when you have three of the same unit, it’s a good idea to vary their skill sets. Using the same character twice in the active party will make them go into Brain Overload, which means they will be unable to defend the Terminal for a few rounds. Because of this, it’s important to rotate your offensive and defensive teams and keep everyone’s levels and skills up to date to prevent too many characters from being inactive at once.

The real difficulty for me is identifying what enemy types are on the battlefield. Some kaiju are airborne, so you need to use EMP skills to pull them to the ground. Armored kaiju need their shields to be penetrated, but sometimes enemy shields are managed by separate units. And then another wave might spawn and undo all of your hard work. Because the visuals are so basic in these sections, you have to go by the shape of the unit, but when there’s hundreds on screen at once, trying to single out a tiny unit on the field is a nightmare. By the end of the game I did start having some fun because the different enemy types required a degree of strategy, and honestly, who doesn’t love watching hundreds of kaiju explode on screen at once? Normal mode was doable for me, but if RTS really isn’t your thing, there’s an easy mode to help you get through these sections and just enjoy the story.

Looking back at that 2009 interview, I think I can safely say that Kamitani and Vanillaware have achieved their ultimate goal with 13 Sentinels: Aegis Rim. It’s clear that this game is so much more than just “a little RTS, a little action, and a decent story.” It delivers a dense and gripping story full of twists that is grounded in its characters and smaller moments. Empathising with the characters and watching the revelations unfold through all of the different perspectives enamoured me. It’s a bold departure for the studio, one which seems impenetrable at first, but it’s hard not to love a game where you can drink milk coffee from a vending machine one moment, and then pilot a giant mech the next.

Not all characters and stories are equal, RTS sections take a while to improve, everything can be pretty overwhelming.

Vanillaware's most ambitious title might also be their best.