Long time fans will be pleased with this entry in the Ace Attorney series, and it's a quality game for newcomers as well... 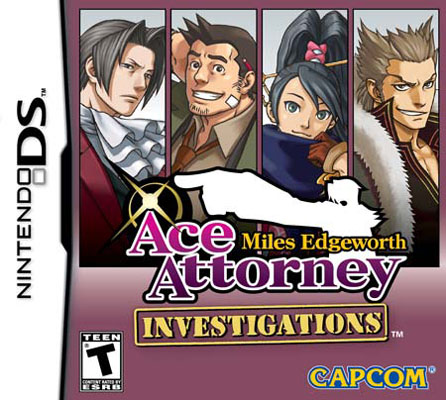 After I completed the Phoenix Wright trilogy, I had mixed emotions. While I was happy to have resolution with the mysteries that had been developing since the first game, it was also very hard for me to say goodbye to the characters I had gotten to know and naturally became attached to; they all still hold a special place in my heart. So when I heard Miles Edgeworth was going to be heading up his own Ace Attorney title, I knew I couldn’t let the chance pass me by to play it. Edgeworth has always been quite an ambiguous character for Ace Attorney fans: he walks the line of ethical and unethical quite often throughout the Phoenix Wright games, and it has been hard to pinpoint exactly where he stands. Thankfully, Ace Attorney Investigations finally answers that pondering question. The game also provides insight into what Edgeworth feels a prosecutor’s main goal should be. Ace Attorney Investigations constantly forces the player to question their morality, and ask whether it is more important to the job of a prosecutor to obtain a guilty verdict or find the absolute truth. Throughout the game, players learn the stuff that Edgeworth is truly made of, and that is more than enough reason to give this game a spin.

You Can’t Handle the Truth

There are five total cases awaiting you in Ace Attorney Investigations. Each case plays off previous cases and all are related to each other, which becomes more and more clear as you proceed to the final case. There are three mysteries that you’ll make your way through on the way to solving all five cases. The first is the KG-8 case, wherein a foreign dignitary is killed, and prosecutors are unable to convict anyone of the crime because of lack of evidence. After this case, a mysterious figure by the name of the Yatagarasu appears. The Yatagarasu steals important information related to cases and leaks the information to the public. Last, there’s a huge smuggling ring that has been afloat for years, yet nobody has been able to pinpoint the ringleader or even catch members with enough evidence to convict them of their crimes. Throughout the game, you go on a journey to piece together various clues and evidence to solve the secrets behind these three anomalies.

As with previous Ace Attorney games, the story stands strong as the focus and that is what will keep you playing this game. As I played through the game, though, I didn’t find myself getting that excited or addicted until I reached cases four and five. The problem with the earlier cases is that the writing isn’t as strong as I would have hoped for it to be. In all the cases aside from the last, I was able to pinpoint the guilty party before it was even half over. Perhaps I’m just getting too good at these games as a long time fan, but the element of surprise and shock were absent for a good share of the game. Once you get to that very last case, however, this assertion is turned on its head as all the pieces start coming together from everything you’ve done in the game. If I am to judge the story as a whole, the end of the game more than makes up for the initial lag, but I still wish some of the twists and turns near the end were spread throughout the entire journey. While my score may seem high for a story that didn’t give me a thrill all the time along the way, when I finally reached the conclusion it was more than satisfying. It felt like the feeling of anticipation as you ride up to the top of a rollercoaster — while there’s no excitement in the ride itself, you know once you get there that something is going to go down. In Miles Edgeworth, once you get to that drop, it’s that same feeling of excitement and adrenaline as you reach the conclusion.

Thankfully, along the way up the drop you have a great cast of characters to keep you company. I must say this is where Ace Attorney games often stand strong, and this game is no exception. What is even more of a treat is that Capcom kept their fanbase in mind when they created this title. There are tons of cameos from characters of past games, and this is easily what I enjoyed the most about the game. If you haven’t played any other Ace Attorney titles, you’ll no doubt still enjoy this game, as the new characters stand strong alongside the old, but you just won’t nearly get as much enjoyment out of the game as if you were a long-time fan. Every time a character I recognized from past games showed up, I couldn’t help but smile or let out an “Oh my god it’s ___ !” The witty and comical dialogue that accompanies characters both new and old only enhances this excitement. Trust me, you don’t want to miss out on this feeling as it helps make the game what it is along with its point and click gameplay.

It’s all about the Logic

It’s true: there are no courtroom trials for Edgeworth to attend during this game. Have no fear, however, because you still hear people’s testimonies throughout the game and catch the contradictions that make up the meat of Ace Attorney gameplay. You simply do it one on one, with no judge in sight. Ace Attorney Investigations places more of an emphasis on linking together evidence by using logic and then being able to place that evidence where it needs to be in characters’ testimonies. You also play much more detective than in previous entries, but, hey, if Gumshoe can do it, you know it won’t be too difficult for you to uncover the truth, pal.

The game plays on Edgeworth’s love of logic and after you uncover evidence and odd things about it, there is a logic button that allows you to piece together certain clues to draw conclusions. This is a welcome addition, as it gives players a way to understand the meaning behind certain discoveries you make during the game, rather than simply putting the correct evidence in testimony. There’s also a deduce button that you can use at certain times to link your evidence with what you observe during investigations. Another new feature to the game is information reproduction. Once you gain enough evidence over the course of your investigation, you can recreate the crime scene, which helps you discover things you would not have seen previously with the lack of evidence. All of these features work out great, and I felt I understood things significantly better in how they add up in the whole scheme of the investigation compared to previous Ace Attorney titles. I also have to say the change they made from first person point of view to third person was in good design. In previous titles, exploration wasn’t awful, I simply felt disjointed from actually being the main character — Phoenix Wright or Apollo Justice were not the same character in investigations compared to when they were in the courtroom. In Ace Attorney Investigations, it clicked with me much more to actually see my character across the screen investigating a scene.

Another of the game’s strengths is the soundtrack. Noriyuki Iwadare and Yasuko Yamada did fantastically putting emphasis on certain intense moments in the game and adding great background tracks when you’re trying to explore a crime scene and press witnesses. In fact, every time I was somewhere where I couldn’t have the sound on, I felt like I was missing out on a key portion of the game. Later, I learned to bring headphones. The game also features familiar sound effects and the occasional vocal here and there, mainly for the words “Objection!” and “Hold It!” These differ little from previous installments, but still function perfectly to help you get through all that dialogue, which is a blessing since this game can at times have excessive text.

I also have to say that I’ve never seen the graphics look quite as good as they do in Investigations. Everything is so much crisper and clearer, the character portraits look the best they ever have, and there’s more detail added to everything. There are more frames of animation in the portraits, and the ability to explore the environment and see the entirety of a character is refreshing. It’s great to see the graphics improved in such a visually stimulating way. Sometimes for developers, it can be difficult to change things around in popular series because fans are so used to the norm, but Capcom takes characters both new and old and tweaks them just enough to make a difference for the better.

Long time fans will be pleased with this entry in the Ace Attorney series, and it’s a quality game for newcomers as well, although it is not the best entry point for the series. It’s definitely what I’d call fan service for those who have stuck by the series, and it’s great that fan loyalty pays off for this game. Ace Attorney Investigations is a solid twenty hour romp that will leave you satisfied at the conclusion. If they decided to expand on this series, I’d be more than happy to hear it — it really is something special. The Ace Attorney series still stands as one of the best offerings on the Nintendo DS, so you really can’t go wrong with any of the games. With old characters making their way back to you, and new characters just as intriguing, you really can’t go wrong. No objections here!