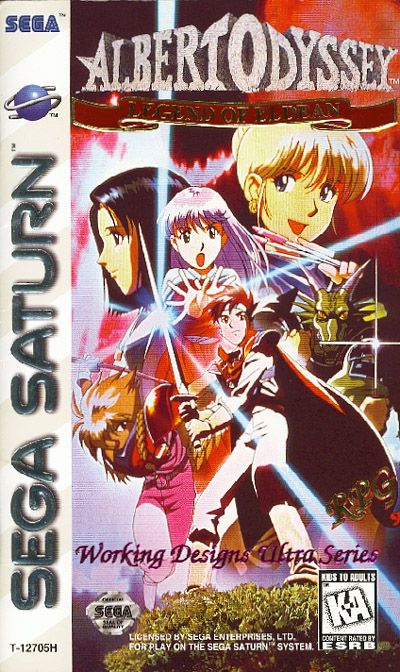 July 1997. That was probably the best month for Saturn RPG fans. For the first time ever, 2 RPGs came out on the Saturn in the same month: Shining the Holy Ark and Albert Odyssey. Well, now that I think about it, it was not the first time since Dark Savior and Dragon Force came out on the same day (December 12) in 1996. Hmmm, seems like my introduction is off to a bad start DOH!!. Anyway, from all the reviews I read from the magazines and on the Internet (and from the discussions I’ve had with fellow RPG fans), there doesn’t seem to be an agreement on the merits of Albert Odyssey. Take Dragon Force for example, I’ve yet to see a bad review for that game and it seems like almost everybody liked it. Albert Odyssey is another matter entirely since some people loved it, some people hated it and some people thought it was average. I happen to be one of those who loved it and I guess it just depends on what you’re looking for in an RPG.

Many of you who did not like Albert Odyssey will probably want to know WHY I liked it. Well, for starters, I’m a big fan of traditional 2-D hand-drawn RPGs and Albert definitely follows that traditional route. Some people really love exploring dungeons and making a lot of experience by getting into tons of battles. I’m not one of them. What I like most in RPGs is getting to a new village, talking to everybody, buying new weapons and armors from the shops and seeing the story develop. It just happens that Albert Odyssey excels in those areas that I love. RPG fans who like exploring dungeons and getting into lots of battles will NOT like this game because the 2 major flaws of the game resides there. First of all, the loading time for the battles is more than your average RPG. When you kill a monster for example, there is a 3-second delay before he actually dies after you hit him. The other flaw is that there are WAY too many battles. This was a lot worse in the Japanese version but nonetheless it was way too much in the American version also. There is nothing more frustrating than being in a dungeon and being stopped every 5-10 seconds to go in a battle.

Since I don’t like dungeons and battles that much you might be asking why I liked the game since the two flaws are in those areas. Well, it’s simple, there just isn’t that many dungeons in the game. No matter how painful they were, since there wasn’t a lot of them, it did not detract from the fun I had playing the game. For example, I remember that at the beginning of the game, I had visited 6 or 7 villages and I had done only 1 dungeon (the cave with the fairy). To me, that was heaven because most of the time when I’m playing an RPG, it always alternates between villages and dungeons. You get to a new village, there is some crisis in a cave nearby, you go there and kill the monster or save the mayor’s daughter and then you proceed to the next village and do it all over again. With Albert, it was: go to a new village, something happens there, you exit the village, you go west, you see another village, they tell you to go to the village to the south, you go there, etc.. And while this is happening, there is no dungeons to distract you from the story. That’s what I loved about Albert Odyssey and I’ll explain several other reasons when I go over the different category further down in this review.

Graphics – Albert Odyssey’s graphics were in my opinion amazing. I think this game is the pinnacle of 2-D hand-drawn RPGs. Everything was really detailed with lots of colors and lots of background animation like smoke coming out of chimneys, leaves from the trees moving with the wind, clouds moving in the background in the battles and snow falling in the middle of the battles. At first, I thought I might be alone thinking this and that everybody would complain that it wasn’t 3-D or that it looked like a 16-bit game but I showed it to a friend of mine and he said he thought the graphics were great. Okay, that’s not a big deal, a friend of mine said he thought it looked great but what you don’t know is that this friend of mine is a BIG Nintendo fan who hates Sega and keeps claiming that 2-D is dead and that 3-D rules. If HE thought it looked great and he keeps bashing 2-D, I figured that I was indeed right in my opinion that the graphics were great.

Sound – Okay, this area is probably another one that made me love this RPG even more. I happen to be a big videogame music fan and to me music is REALLY important in a game. I did not expect much from the music of Albert since I had heard a sample of the battle theme before I bought it and I thought it was pretty average. Nothing could prepare me for the great soundtrack in this game. This is by far the best music in a 32-bit RPG in my opinion. Some people really liked the music from Suikoden but since I didn’t play it yet and the songs I heard from the game so far haven’t impressed me, I have to go with Albert as the top game music-wise. The village songs were very fitting and some of them were just so beautiful (the Harpy village at the beginning of the game). On top of that, many of the songs were recorded using real instruments and put as tracks on the CDs (which you can listen in a regular CD player). Those tracks are incredible, especially the Overworld theme song and the love theme of Pike and Eka. I could write an entire review just for the music so I better just shut up now and go on with the review. Check our music section for a couple of songs from Albert Odyssey if you want to hear for yourself.

Story – The story in Albert is not great but it is still pretty good. Don’t expect a story rivaling the Lunar games for example. I thought it was a rather enjoyable story. It wasn’t as typical as most RPGs (save your love from an evil monster) or anything like that. You basically start out on your quest to find a cure for your sister/mother (I don’t really know how to call her since she was an harpy who saved you when you were young and with whom you’ve lived all your life) which was turned to stone by an evil man who found that your village had a precious crystal he was looking for. Along the way, the story will change and you will have some side-quest and I found it to be pretty good. I especially liked the light-hearted feel of the game, the funny dialog (thanks to Working Designs translation) and the little love triangle between Pike, Eka and Kia (quadruple if you count Krishna :P). A lot of people don’t like Working Design’s translations but I don’t mind them because I think they make the game a hell of a lot more interesting (especially the villagers). However, I don’t like it when they ruin a serious moment in a game with an out of place joke or comment like they did in Lunar Eternal Blue for example. Fortunately, I didn’t notice any of those moments in Albert Odyssey and the serious moments remained serious.

Overall – I’ll keep this part short since I think I pretty much explained everything above. Basically, I loved Albert Odyssey especially the light-hearted feel of it all. It just felt like a really enjoyable RPG to me with great 2-D hand-drawn graphics, beautiful music and an OK story. A real testament of the slowly disappearing classic 2-D traditional RPG. No matter how great I thought it was, I have to admit that it could have been a lot longer. However, I don’t think it’s that big a deal especially considering that a lot of the 32-bit RPGs so far have been very short (Suikoden and the upcoming Magic Knight Rayearth for example). Anyway, if you love traditional RPG with a little bit of humor and great music (like the Lunar series), I highly recommend this game because in my opinion it really comes out as being a quality RPG and definitely worth picking up if you have a Saturn.