Atelier Ayesha: The Alchemist of Dusk

It's another alchemic adventure that any fan of JRPGs would do well to embark on. 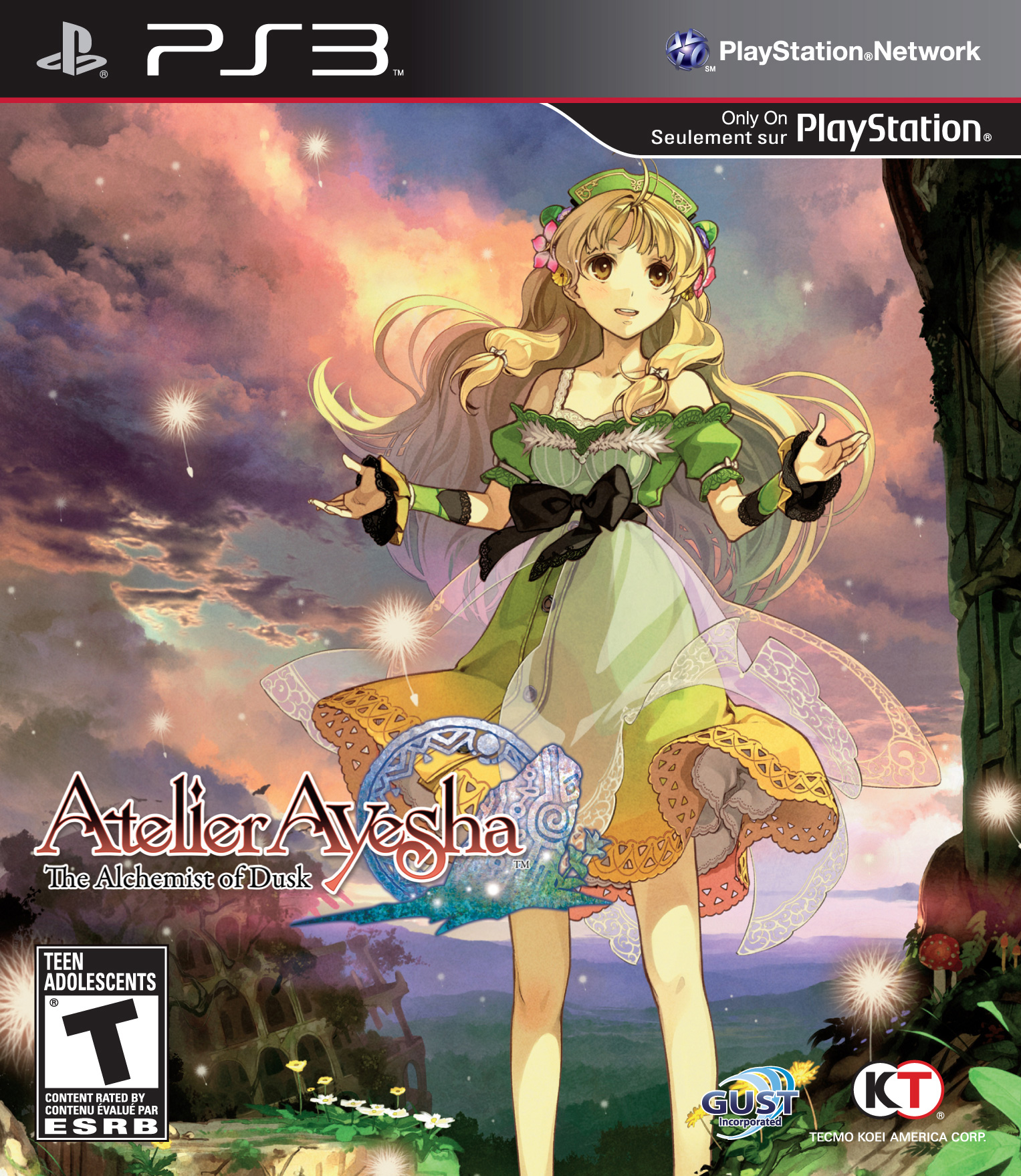 The release of an Atelier game has become an annual event. For the last three years, the PlayStation 3 has played host to the escapades of several young alchemists. Goofy-but-earnest Rorona proved the worth of alchemy in a rapidly-industrializing city, meek Totori grew into a dependable adventurer on a quest to find her missing mother, and aimless princess Meruru helped her kingdom flourish into a bustling republic. As the series progressed, the games grew alongside their protagonists. Item synthesis became more intricate with the addition of new abilities and party member bonuses, while combat evolved from a simple turn-based system using only HP to a multi-layered affair with MP, special attacks, support actions, and super moves. Ayesha continues this trend with new twists to its two core gameplay elements, a brand-new cast of characters, and a world completely divorced from the familiar territory of Arland. Save for a few design oddities, Atelier Ayesha distinguishes itself by building upon what made its predecessors great without rendering them obsolete. It’s another alchemic adventure that any fan of JRPGs would do well to embark on.

The latest Atelier game features the lonely apothecary Ayesha, who has lived alone in an isolated workshop for several years following the presumed death of her younger sister, Nio. Ayesha’s journey of self-discovery is unique in that it takes a slightly more somber tone than her predecessors’. Her world, the land of Dusk, is full of dilapidated ruins and barren stretches of wasteland due to the misuse of alchemy in ages past. Ayesha ekes out a living by selling medicine to a traveling merchant, but her life lacks a true purpose. One day, during a routine visit to Nio’s grave, Ayesha witnesses a fleeting vision of her sister above a garden of glowing flowers. A traveling alchemist, Keithgriff, informs Ayesha that her sister is not dead, but merely “missing,” though he doesn’t give her any further information, aside from urging her to study alchemy. Thus, Ayesha vows to do whatever it takes to save Nio, giving her life some direction for the first time in years. The rest is up to the player: will Ayesha discover the truth behind her world’s sordid history and reunite with her sister, or will her resolve prove insufficient?

Atelier Ayesha has arguably the most engaging narrative among the PlayStation 3 Atelier titles, with more emotional weight than ever before — a refreshing shift away from the bubblegum-y hijinks I’ve come to expect from the series. There are still many lighthearted scenes with humorous dialogue, but with Nio’s life on the line, I found myself more motivated to progress through the main story. Its “conclusion” is weighty and satisfying, and between additional content beyond the story’s resolution and ten different endings, there are plenty of reasons to replay the game. Also debuting is a delightful new cast of characters, nearly all of which are interesting and likeable. The stoic huntsman Juris, mischievous trainee witch Wilbell, and socially awkward swordswoman Linca are a few of my favorites. Even the supporting cast is new, with Marietta the upbeat shopkeeper and Fred the passionate baker replacing old standbys like Pamela and Hagel, whose personalities were beginning to wear on me after three games. My only complaint is that Ayesha herself could really stand to grow a backbone, but she becomes slightly more confident as the story progresses. Still, Atelier Ayesha is a fantastic starting point for newbies to the series, as well as a breath of fresh air for veterans such as myself.

As before, the game is split into two core systems: item synthesis and exploration/combat. These two elements tie into each other, as Ayesha must fight enemies and gather ingredients in order to create items, which are in turn used to fulfill requests, advance the story, and assist in combat. Synthesis can be as simple or as complex as the player wishes, but higher-quality items create more advantages in combat and satisfy requests more easily. Requests are given by various townspeople and reward Ayesha with items, money, and “memory points.” While the Arland trilogy featured a unified quest hub, Ayesha curiously takes a step back by having requests tied to specific NPCs, which must be manually tracked by the player. I found this a little bothersome, especially because there is no in-game log to keep tabs on who requested what. As a result, I spent more time than I needed to running back and forth around town. Thank goodness for fast travel, which makes its return as a simple menu easily accessible with the start button. Also strange is the omission of an equipment-crafting system. Instead, new weapons and armor are randomly dropped by enemies, and they can be powered up by using various whetstones and dyes. I find it odd that Ayesha can create a bomb that generates a black hole, but she can’t muster up the finesse to craft a sword. I suppose everyone has their weaknesses.

The aforementioned memory points serve as the game’s key character progression system. Whenever a major event occurs, Ayesha will jot down notes about it in her diary. By spending memory points, these notes can be expanded into full diary entries, which have the dual benefit of providing a story recap and granting special bonuses, such as increased EXP gain, improved elemental resistance, or greater HP/MP regeneration during travel on the world map. It isn’t quite as deep as Atelier Totori’s adventurer license or Atelier Meruru’s kingdom-expansion system, but it still ties into the narrative nicely.

Combat has the same basic structure as before: it’s turn-based, with action order determined by the speed statistic. In addition to HP and MP, each party member has support actions that can be used to defend other characters and perform follow-up attacks. Super moves also make their return, allowing characters to release devastating, cinematic attacks to annihilate enemies. A new wrinkle comes in the form of positioning; characters can be moved around the battlefield to perform back attacks for extra damage or initiate special support actions. It’s nothing revolutionary, but it’s a solid system that provides precise control, which is not always a given in contemporary RPGs.

Once again, time management is an important gameplay element, though it is more relaxed than ever. Ayesha has three years to save Nio, and if she fails to meet the deadline, her fate is undetermined. (That means you get the bad ending, okay?) Every action, from traveling on the map to gathering and synthesizing items, takes time. One might expect this to be stressful, but the game actually gives plenty of time to complete everything, so impeccable planning is not quite as necessary this time around. I actually didn’t even mind the lack of Homunculi, which were used in previous games to perform extra synthesis and gathering actions concurrently with the player, because it allowed me to keep my focus on one task at a time. Other small tweaks like the automatic stacking of materials in Ayesha’s basket and the elimination of travel-inhibiting LP are welcome additions.

Gust has raised the bar once again for cel-shaded character models. Hidari’s character designs are gorgeous, sporting bright color and intricate detail, surpassing the beauty found in Atelier Meruru. Instead of static portrait cutscenes, everything is rendered in real-time, so characters feel more alive with their animated expressions and body language. Unfortunately, while the environments are by no means ugly, they do not measure up to the fantastic character models. The design is inspired, but many areas feel low-budget with flat, boring textures. Battle animations, too, are still slightly janky, though they remain leagues above the amateur production values of Atelier Rorona.

There is tremendous musical diversity in Atelier Ayesha. The opening theme, “Flower Sign,” has a lovely meditative quality, and many of the field songs have a more mature sound than typical Atelier music. Liberal use of woodwind, violin, and acoustics give the land of Dusk an appropriately melancholy feel. The myriad battle tracks, which vary depending on location and circumstance, play with a variety of themes and are great across the board. The song that plays during the final boss fight in particular is especially haunting. A few duds do appear from time to time, including the now-predictable “wacky event music,” which samples animal noises, boings, and squeaks together in grating dissonance, but the soundtrack is excellent on the whole. The game’s English voice acting is serviceable, save for Ayesha, who was cast with an inappropriately ditzy voice. I place more blame on the middling script than the actual voicework, however — it’s hard to take people seriously when they say things like, “Even without a mustache, I still think you’re an amazing person.” Thankfully, the main story manages to avoid falling into wackyland, and so I can accept both aspects of the game without much fuss.

I would call Atelier Ayesha a side-step more than a step forward for the series. It adds as many features as it removes, ending up in the same place in terms of quality. It is a must-play for fans of the Arland series, and it comes with my recommendation for any RPG fan that isn’t put off by an anime aesthetic and a slower pace. Like the Atelier games before it, it may appeal to a somewhat limited audience, but Atelier Ayesha is a quaint, relaxing adventure that provides a refreshing contrast to high-stakes JRPG melodrama.

Another high-quality Atelier game that is sure to please its target audience and may even convert some newcomers.