Atelier Meruru: The Apprentice of Arland
Review by Derek Heemsbergen · May 29, 2012

Unless you find JRPGs absolutely repugnant, there's little to dislike about Atelier Meruru. 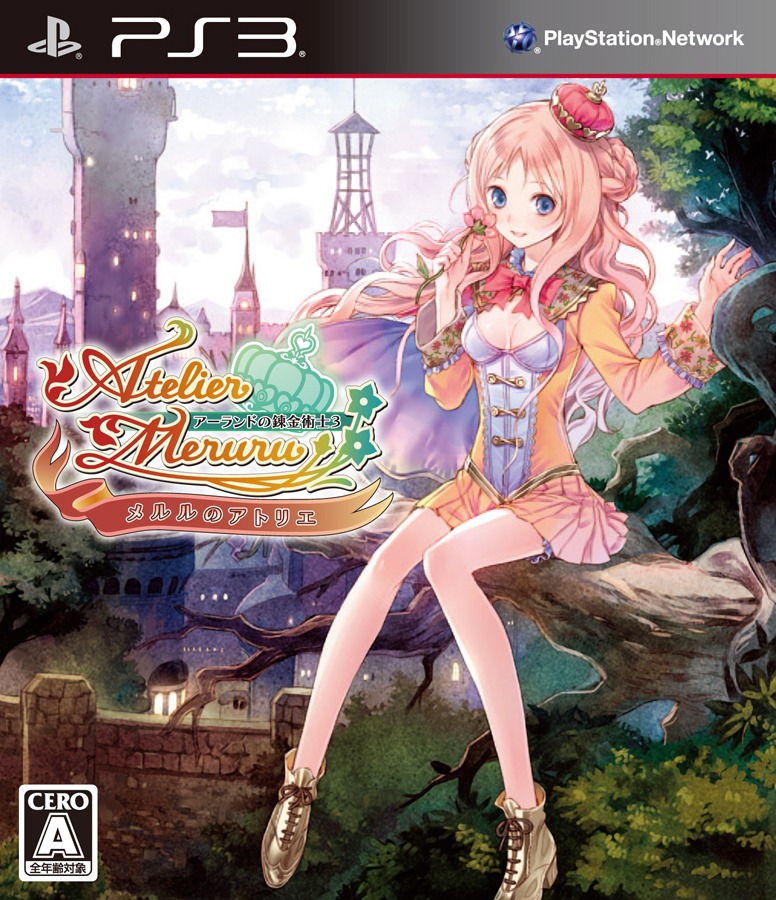 Recipe excerpted from the GUST Grimoire:

Bring an alchemist’s cauldron to boil. Slowly dissolve one part material gathering, one part monster slaying, one part item synthesis, and one part kingdom development until sublimation occurs. Stir counter-clockwise, adding in improvements from Atelier Totori, and watch as Atelier Meruru takes shape. Once materials have transmuted, transfer to a crucible, heat until liquid becomes an iridescent silver, and pour into a circular mold. Allow the liquid to cool and harden into a Blu-Ray disc. If performed correctly, the result will be an RPG that retains the series’ strengths while introducing new elements that make for a well-rounded, memorable gaming experience.

Is it silly that all these hours after finishing Atelier Meruru, I’m still daydreaming about mixing salves and potions? Sure, but it’s also a testament to how the talented people at GUST have succeeded at making such an ostensibly mundane activity into the compelling focal point of yet another Atelier game. This entry takes the best of its two predecessors and layers in a robust, simulation-style kingdom development system that is both motivating and rewarding. I wasn’t sure if the game was going to live up to my lofty expectations, since I hold Atelier Totori in such high regard, but it did. I can happily and confidently proclaim that Atelier Meruru the best in the Arland trilogy.

Like Atelier Totori before it, Atelier Meruru doesn’t tell a dramatic story about saving the world from an ancient evil. Rather, it is a personal tale of one girl’s growth into an adult and her acceptance of the responsibility that comes with it. (Playing previous games in the series isn’t necessary to understand the plot, but for those wanting to get up to speed, a story primer is accessible from the title screen.) Merurulince Rede Arls, princess of the rural Arls kingdom, dreams of becoming an alchemist after meeting with the famed adventurer Totooria Helmold. Her father, the king, agrees to let her pursue her ambitions under one weighty condition: Meruru is to spearhead the expansion of her country as it prepares to merge with the Republic of Arland. She accepts, and during her five-year journey, she befriends a sundry cast of characters, builds Arls into a thriving kingdom, and learns about the woman she wants to become. While there are some moments of gravity, the story is by and large a lighthearted affair, with situations that elicit genuine laughs and smiles throughout. The humor does come with the caveat of lacking universal appeal, since much of it relies on the stereotypes found in Japanese games and anime. Sexual innuendo pops up every now and then, too, but it’s pretty innocent and nowhere near as creepy as the stuff found in games like Hyperdimension Neptunia. It helps that all of the characters are genuinely likeable this time around, from the spunky princess Meruru to her stoic butler, Rufus. Even the once-lambasted Gino managed to grow up and endear himself to me. Imagine that.

The linchpin of Atelier Meruru’s gameplay is using alchemy to create items. By taking a recipe and mixing different ingredients, Meruru can concoct items with various qualities, which are then given either to the guild (for money) or to various NPCs to facilitate the growth of Arls. Upon completing a task, the player is rewarded with “development points,” used to build new facilities around the kingdom that provide passive benefits like increased experience or the reduction of necessary materials to perform synthesis. Even more impressive is the way the game graphically reflects Meruru’s work as the story progresses. For instance, a run-down fort outside of Arls can morph into a bustling outpost if enough food and supplies are delivered to the soldiers stationed there. Potential goals are plentiful, and excellent pacing keeps the player’s sense of accomplishment alive. Development tasks are split evenly between item synthesis and monster extermination, so rather than pushing the player along a linear path, the game allows a great deal of freedom in choosing how to advance. Thanks to the elimination of due dates for requests, the player never feels overburdened with work and can play at his own pace.

The process of acquiring new recipes has been streamlined, too. Instead of finding alchemy books in the wild like Totori did, Meruru’s knowledge expands as her alchemy level increases. Every five to ten levels, Meruru learns a set of recipes from her mentor in a charming vignette, lending their student-teacher relationship a gameplay context that connects to the storyline. Other sources of guidance include books from Meruru’s teacher at the castle, advanced techniques from the mischievous Astrid, and even doodles from little Rorona. New items are introduced at a steady rate, and I never found myself missing any particular recipes for guild tasks or development requests, alleviating a problem I had in Atelier Totori due to the occasional missed treasure chest.

As the series has progressed, so too has GUST’s aptitude for creating an aesthetically pleasing interface. The inventory screen resembles a diary, with ornate trim and character portraits that look hand-sketched. The battle interface is once again improved, seemingly drawing inspiration from games like Persona 4 with crisp, eye-catching icons, banners, and fonts. It manages to convey all necessary information (HP, MP, LP, buffs/debuffs, and turn order) to the player without superfluous detail. I found it to be a pleasant change from the busy menus and flurry of dancing numbers we are subjected to in many modern RPGs. Mechanically, the turn-based battles are very similar to those in Atelier Totori, and the only noticeable addition is that of some new item-related commands. It’s not a groundbreaking system, but it’s competent and gets the job done.

Atelier Meruru is, in a word, beautiful. It has one of the most vibrant color palettes I’ve ever seen in a game, with gorgeous pastels that create a lovely, dreamlike atmosphere. Arls is an enchanting place, from the cobblestone streets of Artisan’s Way to the verdant Namiki Road, where sunlight filters through the canopy overhead. Character models are more detailed than ever before, and Kishida Mel’s gorgeous illustrations help the small details of their elaborate costumes stand out. Everything is well-animated and impressively polished. The intermittent dip in framerate is disappointing, but it’s hard to get hung up on something so small when everything is just so damn pretty.

All of the characters have fitting voice actors that convey their various personality quirks very well. They all sound how I expected them to before hearing them talk. The only character that really falters in her delivery is Meruru, which is a shame because she has the most screen time. Her voice actor is appropriately cast, but she sometimes sounds unnatural or uncomfortable when reading her lines. The music is fittingly whimsical, but not substantially different from the tracks found in Atelier Totori. I thought the flamenco-inspired battle theme was a little weak, but boss tracks are significantly more exciting, and field areas use different riffs on a recurring motif. Thanks to a BGM-swapping function accessible in the workshop, players can customize the music in every area to suit their taste. Only a few tracks are initially available, but more are scheduled to be released via DLC. It’s a welcome addition to a game that has a tendency to frequently loop the same songs repeatedly.

Unless you find JRPGs absolutely repugnant, there’s little to dislike about Atelier Meruru. It’s a delightfully addictive game that provides a great sense of player achievement. A wealth of content ensures that players are never without a goal to work towards, and ten possible endings give the game tremendous replay value. Though the humor and atmosphere have a fairly niche appeal, the rest of the game is polished enough to appease even the most ambivalent gamer. It’s sad that this game marks the end of the Arland trilogy, but if the level of quality here is any indication of what GUST is capable of, I can’t wait to see what the future holds.

Humor and Japanese aesthetic aren't for everyone, music can get repetitive.

The pinnacle of the Arland trilogy and a fantastic RPG in its own right.