...slave labor has never been so adorable. 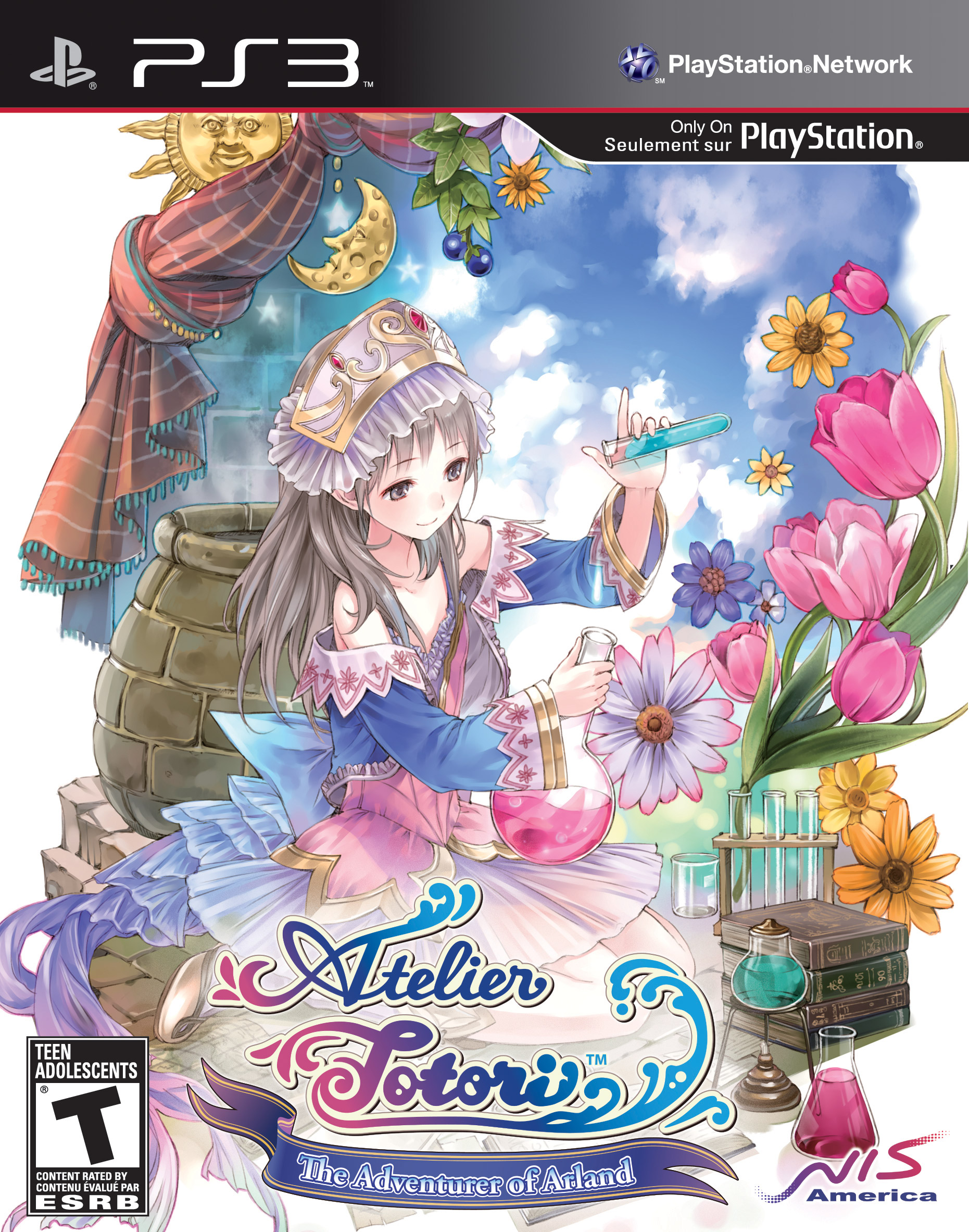 Creating everything from bombs to pies with the power of alchemy: check. Probing dark dungeon depths: check. Bopping ferocious monsters over the head with an adorable staff: check. It’s all just a day in the life of Totori, novice adventurer and star of the twelfth installment in the long-running Atelier series.

The pervasive element in the Atelier series is the creation of items via alchemy. Atelier Totori’s immediate prequel, Atelier Rorona, placed such a heavy emphasis on alchemy that most activities outside the workshop felt underdeveloped. The sequel marries item synthesis and exploration in a way that feels much more natural than its predecessor, offering open-ended gameplay that rewards players for nearly every action they take. Every aspect of the game, from the graphics to the combat, have received welcome improvements that make it easier than ever to become immersed in the deceptively complex world of an Atelier title. While its anime-inspired sensibilities may yet prove a bit too niche for some players, Atelier Totori is an addictive experience that oozes charm.

The game begins when Totori, a frail 13-year-old girl living in the remote fishing village of Alanya, sets out on a quest to find her missing mother. To follow in her footsteps, Totori becomes an adventurer, which entails acquiring an adventurer’s license and advancing through ranks based on her accomplishments. This concept is central to the player’s progress in the game. In her day-to-day life, Totori takes requests from the Adventurer’s Guild. There are three types of requests: synthesizing, where the player must create a specific item; gathering, which entails collecting a number of ingredients found in the field; and hunting, which requires defeating particular monsters. Completing these tasks rewards Totori with money and, when certain objectives are fulfilled, points on her adventurer’s license.

Adventurer points are earned in a manner much like achievements or trophies, but on a smaller scale. Totori might get an award for dropping off a certain type of item for the first time, discovering a new landmark while exploring, or creating every item in a recipe book. These accomplishments are added to Totori’s license, and incomplete tasks are listed as mystery objectives, giving the player an idea of what to do in order to raise their adventurer rank. Higher ranks mean access to new areas, new ingredients, and increasingly difficult quests. The system is an excellent way to track progress and provides constant incentives to try new things. I never found myself lost or without some kind of self-imposed goal, and for a game that provides so much freedom, this struck me as an extremely well-implemented feature.

Time management is a big part of many Atelier titles, and this one is no exception. Totori’s story comes to a close after about five years, so the player must make the best of the limited time. Synthesizing, gathering ingredients, traveling on the world map, and fighting monsters are all actions that consume precious days. It’s easy to spend a game month in a matter of minutes by walking to some far-off destination, but things never feel out of control because the time spent on any activity is always clearly outlined in advance. Later in the game, Totori can adventure more efficiently by creating items that let her walk and gather faster, further lightening the burden of scheduling. She can also delegate tasks to miniature homunculi known as “Chims” to free herself for adventuring in exchange for pie. Slave labor has never been this adorable.

Unlike Atelier Rorona, which had assignment deadlines that broke the game into chapters, Totori must only reach a certain rank by year three to continue the game. This single deadline removes much of the stress that plagued Rorona, and is quite easy to accomplish without serious dedication. The addition of an instant-travel feature within towns is another welcome change that eliminates wasted time. It’s clear that the developers put a lot of effort into streamlining the experience as much as possible, and it improves the quality of the game greatly.

With such a focus on item creation, Totori spends a lot of time managing her inventory, and I’m glad to say that it couldn’t be easier. Items are split between an on-hand basket with a 60-item capacity and a container at the workshop that can hold up to 999 weird and wacky objects. When Totori finds herself buried in an avalanche of alchemic accoutrements, she can sort them using filters like quality, item type, and more. Items can be selected in bulk by holding down X and scrolling through a list, and best of all, quest items can be turned in directly from the container. This greatly reduces the amount of item-juggling needed, shifting the focus onto actually playing the game and allowing Totori to focus on more entertaining exploits.

Combat is another area that has seen vast improvement over Atelier Rorona. Previously, HP and MP shared a single gauge. Atelier Totori expands character energy into three meters: HP, MP, and LP. The first two are standard RPG fare, measuring health and magic points respectively, while the latter functions as a stamina gauge of sorts. LP is used to traverse the world map and to take action in battle. When a character’s LP falls below 25%, they face offensive and defensive penalties, but LP is easily restored with items or by returning to town. In fact, I never actually experienced the LP penalty in my entire playthrough, so it doesn’t really become an issue.

In battle, characters and monsters act according to a turn gauge much like Final Fantasy X, where speed is the determining factor in who goes when. Everyone can attack or defend, but only Totori (and later Rorona) can use items. Other characters have special skills, which consume MP and have flashy, eye-pleasing animations. The assist system returns from Atelier Rorona as well, allowing party members to shield or attack with Totori at the press of a button. The refinements to combat make it simple but satisfying, and the world is full of monsters that pose a challenge to characters of any level.

The graphics in Atelier Totori have also received an overhaul, which is a big step up from its prequel. The cel-shaded character models are more detailed than ever, sporting intricate outfits and better animations. Kishida Mel’s stunning artwork is once again on display during conversation, featuring beautiful pastels and expressive characters. Special events receive full-screen artwork that is a treat for both the eyes and the ego, as each event is accompanied by a trophy. Environments are pleasant, with a few particularly pretty areas scattered about, and they’re fun to explore as well. The graphics may not reach the level of other high-budget RPGs, but this is easily the best-looking game Gust has ever produced.

The greatest disparity in quality is found between the game’s aural components. The music created for Atelier Totori is well-done, with appropriate lightness that fits the game’s atmosphere. The opening theme is catchy and does a great job of preparing the player to dive into Totori’s world. I’m happy to say that the battle music is vastly improved from Atelier Rorona, which had a low-impact track that failed to hype me up even once. The new theme has a faster tempo and a memorable melody that makes combat more enjoyable. The rest of the music is pleasant and airy, making liberal use of the flute and accordion.

The musical trouble starts when Totori arrives in Arland. All of music in the city is recycled from Atelier Rorona, and as far as I’m concerned, this is not a good thing. The shop and castle tracks are repetitive enough, but the real offender is Rorona’s workshop theme. Because Totori uses this workshop as a second base, the music plays for long periods and can become extremely grating, especially for people who have spent forty or fifty hours playing Atelier Rorona like I have. The purpose of re-using this music may have been to invoke feelings of nostalgia, but the only feeling I felt was annoyance and an urge to press the mute button.

Voice acting in Atelier Totori is somewhere around the middle of the spectrum in terms of quality. Totori herself is well-cast, which is a good thing because she’s the character who speaks the most. Her meekness may be a bit off-putting to some, but she can be adorably determined, too. The returning characters from Atelier Rorona retain the same voice actors, who are fairly competent and inoffensive. The bad acting comes from several of the new characters; Gino is a relentlessly annoying, nasally brat, Mimi rivals Cordelia in her snottiness, and Peter’s motormouth gives the main character of Suikoden Tierkreis a run for his money. Overall, the characters have voices that match their personalities, no matter how irritating they may be. Purists can opt to listen to the Japanese voice track, which is an appreciated inclusion.

Atelier Totori is a game about the journey, not the conclusion. Most of the game is spent developing the characters rather than advancing Totori’s quest to find her mother, but this really isn’t a bad thing. Over the course of five years, Totori grows from a helpless weakling into a confident adventurer. It’s hard not to connect with her on some level. The rest of the characters grow too, in both their interactions with Totori and in their own ways. They engage in lively banter with one another, and the characters that are invited on adventures more often get more screen time, effectively allowing the player to choose who they want the game to feature. Because of my aforementioned dislike of Gino, for example, I left him out of my party for most of the game, and in return, I was not forced to interact with him often. Event scenes with the player’s preferred characters are plentiful enough to keep things interesting. The story is certainly not a revolutionary one, but it treads familiar ground in a refreshing way.

It’s difficult to find fault in Atelier Totori, but I recognize that it is not a game for everyone. The characters are mostly unique and interesting, but their roots in anime archetypes are obvious. Synthesizing items can get repetitive, and the main story is underdeveloped until near the end of the game, but these are fairly negligible issues. Fans of previous games in the series will find a lot to love here, and the modern conveniences are attractive enough to lure in hesitant newcomers. Players looking for a colorful world, a lighthearted story, and deep gameplay need look no further than Atelier Totori.

A treat for fans and the perfect place for newcomers to start with the Atelier series.