Personally, I enjoyed the story and how it was able to provide a satisfactory and complete ending in not too long of a time. 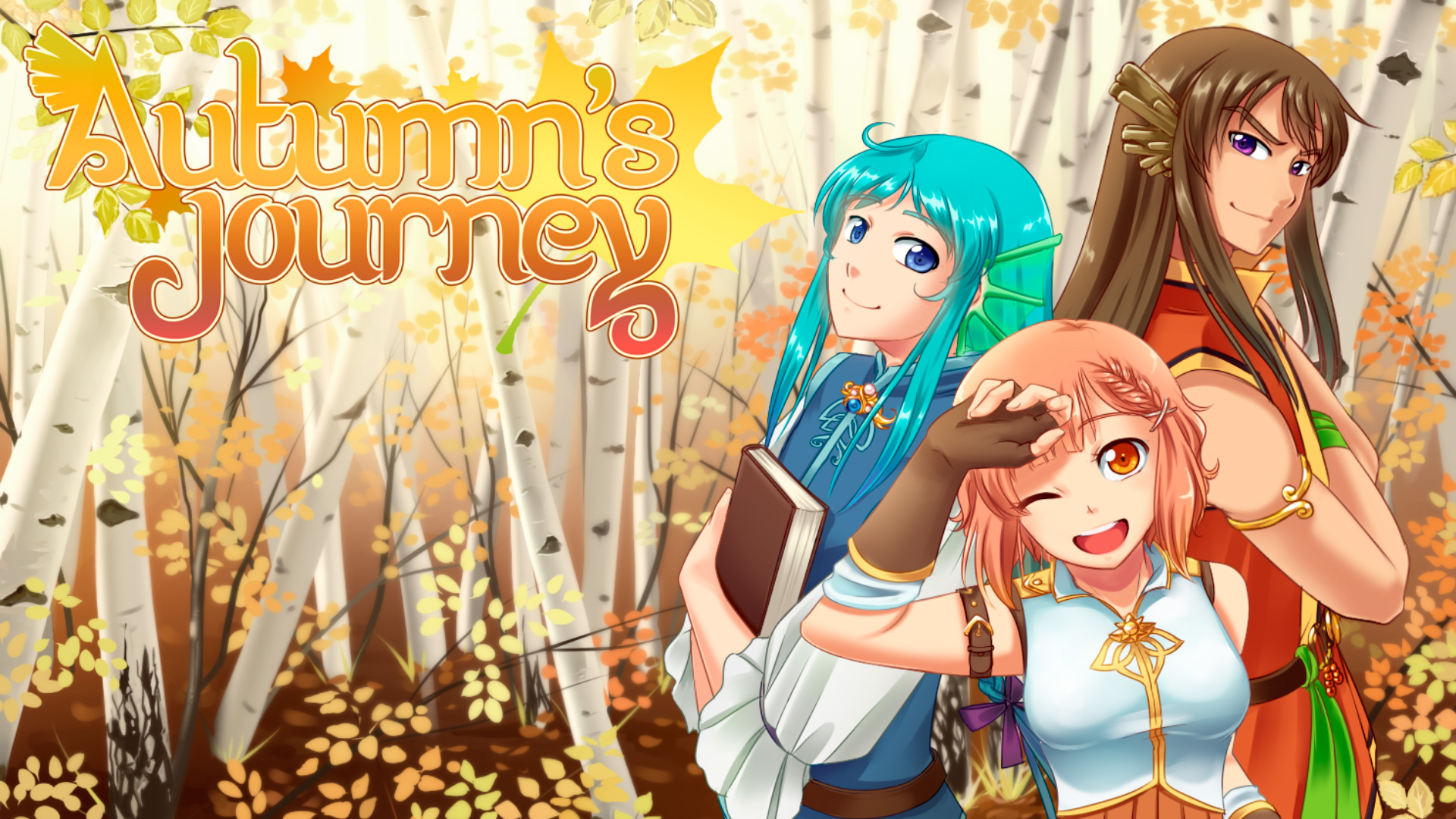 This time of year, seasonal films are all around. You know the kind of movie I’m talking about: a two-to-three-hour film that might not leave much of a lasting impression over time but will still manage to leave you feeling cheery and happy for a little while afterward, at least. Autumn’s Journey is the visual novel equivalent of a seasonal film…and the game’s plot even has a seasonal focus! This VN is a short title to play through, but it leaves players feeling warm and fuzzy when they reach one of its three endings.

The concept for the game comes from Deji and Felipe Morano, with an excellent script penned by KittyKatStar. Autumn’s Journey’s setting is the fantasy world of Ishtera, which is home to two kinds of people: dragonkind and heavenkind. Heavenkind are your everyday humans who actually worship dragonkind. Players take on the role of Auralee, an aspiring heavenkind knight in training who hopes to prove herself by following in her accomplished mother’s heroic footsteps. She comes across a surly Earth Dragon named Kerr, who has been cursed into heavenkind form. Their encounter soon leads her on a journey through the fall season with Kerr and fellow dragonkind Ilmari as they work to undo Kerr’s curse by completing various tasks where he interacts with heavenkind more. Bonds of friendship (and potentially more) develop between the trio along the way.

The game itself isn’t terribly long, with playthroughs roughly two to three hours in length, so delving more into the story for this review would spoil quite a bit. While perhaps not the most original fantasy yarn out there, the plot is well crafted and the story exposition wonderfully handled. It provides you a clear sense of the world that the characters inhabit. The script itself is written quite nicely, with dialogue and descriptions flowing at a natural and believable pace and no noticeable errors or typos.

Autumn’s Journey wisely focuses most of its time on our three heroes, giving you a strong sense of who they are and how they fit into the story’s fantasy setting. They aren’t the most original characters if one is familiar with tropes prevalent in JRPGs and fantasies in general, but they’re a likable group nonetheless and have quite a lot of surprising character development as events progress. For instance, Kerr kind of fits an archetype at the beginning of the story that I’m not the biggest fan of, but he steadily grew on me the more I played. The focus on the blooming friendship between the three main characters was sincerely cute and heartwarming, and I thought the lack of a “love triangle” in the strictest sense of the word was quite refreshing. Auralee’s enthusiasm, Kerr’s confidence, and Ilmari’s thoughtful nature were all wonderfully conveyed in their scenes.

Gameplay-wise, Autumn’s Journey is a straight-up visual novel. The story is told through artistic backdrops and text boxes, with the occasional decision point popping up for players as Auralee to choose. There is one point in the game where you must choose between a wide variety of tasks to assist townspeople with, but that’s the title’s greatest deviation point. Depending on your in-game decisions, you will be rewarded with CG artwork or differing scenes and outcomes that ultimately impact which of the three endings you get to see. The game really does nothing wrong in the “gameplay” department and is a serviceable VN.

The game’s art team consists of the talented Deji, Nellie, and S-morishita, and their work helps to bring the characters and world to life. I was actually familiar with Deji’s work before from when I reviewed Corona Borealis. Truth be told, I enjoyed her art style immensely in that title, and I feel as if she went into even more detail and expression with the designs here in Autumn’s Journey. The occasional chibi artwork in the game helps add to the cute aesthetic the title is striving for. At first I thought that the backgrounds were a bit too sparse, but they grew on me the more I played. I appreciated the sense of passing time they give as the journey through autumn continues. It was a fitting touch to see the outdoor backgrounds change from bright greens signaling the end of summer to the reds, oranges, and browns associated with the fall. The VN’s art direction is wonderfully fitting for its overall more lighthearted and sweet tone, even if certain artwork is reused on occasion, such as when the rare plot battle occurs.

One of the only missteps I can truly think of with Autumn’s Journey is how the music tracks noticeably “loop” while scenes play out. While the soundtrack itself is serviceable, hearing it cut off and then start up again can be rather offputting and is so noticeable it took me right out of the story immersion often. However, I enjoyed that you could listen to the music tracks in the Extras menu of the game, and the ending theme, “Thank You” performed by Jason Chen, is absolutely lovely and fits the game’s story themes wonderfully.

Autumn’s Journey is available to play in either English or Spanish, and there is the bonus OpenDyslexic option for fonts that I found to be a nice touch. The game does tout partial voice acting, and while I thought the voice actors delivered their lines well, the limited quantity of stock phrases they used had me wondering just how necessary their inclusion really was. Truth be told, I’m not sure I would really have noticed if there’d been no voice acting whatsoever.

Perhaps the biggest weakness of Autumn’s Journey is merely its length, as some will no doubt view its shortness as a negative. Personally, I enjoyed the story and how it was able to provide a satisfactory and complete ending without a long timeframe. Given the playtime, the game never felt as though it was dragging on past its welcome. However, I know that “short and sweet” isn’t to everyone’s tastes; it really does boil down to one’s gaming preferences.

Autumn’s Journey is a cute game with a lot of heart and charming fluff. Much like an entertaining seasonal film, it isn’t a title with a lasting impact after it’s done, but those looking for a short distraction that will have you feeling light and airy for a while will certainly find it here. I enjoyed playing it during the brief story, and that’s personally what matters most to me.

Short duration might not be everyone’s preference, music looping transitions can take you out of scenes, voice acted stock phrases might not be completely necessary.