Bad Apple Wars is a crunchy snack of a visual novel that doesn't muse too long on its angsty themes. 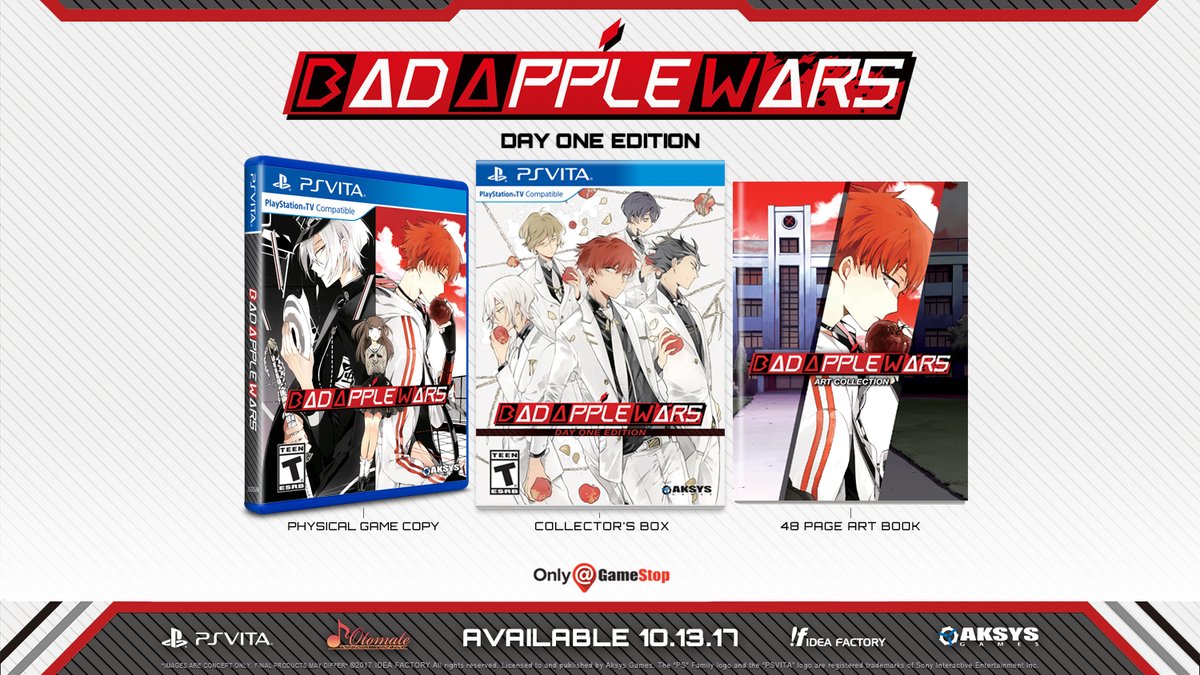 It takes a little bit more than a cavalcade of wispy bishounen to get me interested in an otome game. I need a narrative hook. I need intrigue. I need my stories to have meat. (You can…parse that last one however you will.) Thus did Bad Apple Wars, a tale of dead Japanese teenagers stuck in a bizarre high school purgatory, pique my interest. Yet even death cannot douse the fires of burning adolescent loins; Bad Apple Wars is a melodramatic visual novel that veers romantic from the outset. Well-written though it may be, its soap opera stylings eventually overtake the mystery at its core, resulting in a compressed narrative arc that doesn’t quite earn most of its payoffs.

Bad Apple Wars opens with protagonist Rinka’s unceremonious death and subsequent arrival at NEVEAH Academy, an otherworldly school for wayward teenage souls. But NEVEAH, nestled beneath a blood-red sky, is no heaven; Rinka discovers that she cannot escape, and that following the school’s rules will slowly rob her of her individuality. This leaves her only with two options: Allow herself to be assimilated into the braindead student body of “Good Apples,” or rebel alongside the cool and mysterious “Bad Apples.” Seems like an obvious choice, no?

Bad Apple Wars grants the player autonomy, however, and permits them to fall in line with either faction. Unfortunately, the first half of the game follows the same story beats regardless of Rinka’s affiliation, complete with a genre-standard school festival arc that feels completely phoned in. Rinka herself is a paper-thin character whose defining personality trait is that she…doesn’t have one. Not a chapter goes by where Rinka doesn’t lament her persistent feeling of emptiness; I thought this might play into a significant plot point somewhere down the line, but all it does is make it easier for her to build her identity around the bachelor of her choice. Although she was arguably written as a self-insert character on purpose, her utter lack of agency weakens the story overall.

Thankfully, the five romanceable gentlemen in Bad Apple Wars are more interesting than Rinka. Standoffish Satoru’s obsession with studying is rooted in real-life tragedy, for instance, while Alma hides his anguish behind a cool facade that cracks over the course of his arc. (As an aside, it would have been nice to see some more diverse character designs, as they all sport the same waifish build. None are especially suited to my taste, though fans of Free! Iwatobi Swim Club should feel right at home here.) The game’s supporting cast is similarly likeable, particularly the affable Naraka, whose sunny disposition and affinity for gothic lolita fashion make him into a real scene-stealer. Naraka could have easily ended up as nothing more than the butt of a joke, so it was a relief to see him grow into a prominent character — one treated with respect by the majority of the game’s cast, no less.

Otome games of this variety typically feature a “canon” ending route, and while I expected that honor might fall to the enigmatic White Mask, all of Bad Apple Wars’ bachelors have equally fleshed-out stories. That being said, they’re also all equally compressed, since most of the romantic tension is built during the game’s second act. It doesn’t feel right for the characters to go from being strangers to making sweeping declarations of love over the course of a week or so, but hey, I suppose love is fickle like that.

Though Bad Apple Wars is awash in melodrama, each character has a clear personality that shines through the English text; it’s deftly localized, even if it isn’t exactly hyper-cerebral. For instance, one of the major plot points revolves around the cast trying to break one of NEVEAH’s so-called “unbreakable rules.” Among these is a test that is supposedly impossible to ace, because it changes to exploit the academic weaknesses of whoever takes it. In Japanese, the test is called the “Nigatest,” presumably a portmanteau of nigate (something like “difficult to deal with”) and tesuto (“test”); in English, it’s rendered as “Vexam,” a portmanteau of “vex” and “exam.” Smart choice, that. The game’s font, on the other hand, with its out-of-whack letter spacing, is a deeply unfortunate choice.

Unlike many of its visual novel contemporaries, Bad Apple Wars is a straightforward experience that eschews the pretense of gameplay almost entirely. The sole exception to this rule is a phoned-in touch screen mechanic that allows the player to “feel” each eligible bachelor’s emotions during specific event scenes. Some of these result in the characters’ clothes melting away, which feels totally unnecessary — not because it’s indecent, but because it’s not meaningful. These infrequent moments of input aside, the only way to affect the flow of the story is to pick a faction (once again, a hilarious binary between “good” and “bad” — no grey area here) early on, and then hone in on one of its bachelors. Wham, bam, you’re in love, ma’am.

Bad Apple Wars is a crunchy snack of a visual novel that doesn’t muse too long on its angsty themes. Though its characters are steeped in tragedy, the game isn’t so dire as its premise might suggest, and leans into positivity more often than not. “Love wins,” indeed. Romance aside, however, it’s almost too lean, — an unusual criticism to make of a visual novel, perhaps, but I was looking for a little more to sink my teeth into.

A former RPGFan editor, Stephen Meyerink, worked on this game. This relationship in no way influenced the reviewer’s opinion of this game or its final score.

Full of predictable story beats, romance feels contrived, too much overlap between "good" and "bad" routes, not much musical variety, atrocious font choice.

Bad Apple Wars' lean tale of passionate teenage love in purgatory is, in a word, fine. But "fine" doesn't leave a lasting impression.