There is no element of this version of the game that I can point at as a true flaw. 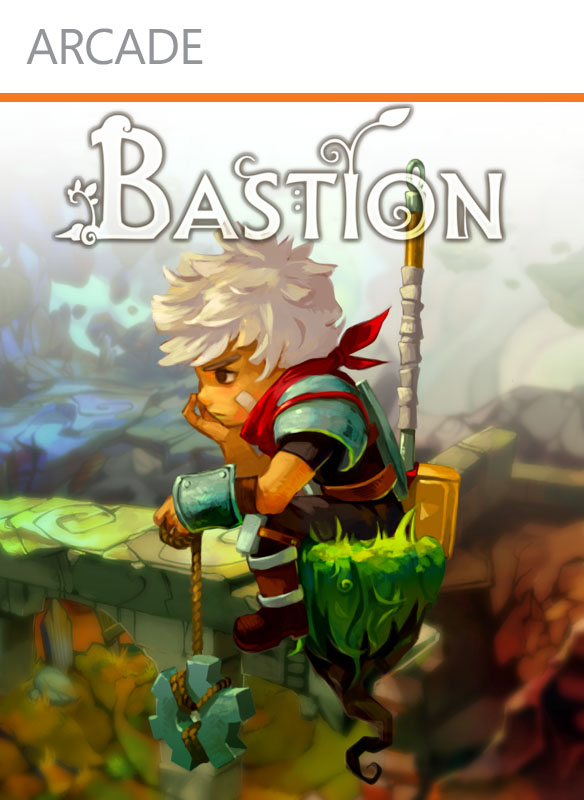 I tried, but I can’t resist telling you right at the start of this review that if you enjoy action RPGs and have an iOS device, you should get Bastion. I’m not going to give you a “maybe,” or an “ask yourself if this game is worth $5 in a market where lots of good games are available free.” This game’s just that good. There are no huge differences from the PC or XBLA version, but if you played it there and enjoyed it, I still think it’s worth playing again on iOS. And if you couldn’t quite get into it on those platforms, try it again here, because the tweaks made for this platform are part of what made me love it.

Bastion tells the story of The Kid, a nearly sole survivor of something known only as The Calamity. Whatever this event was, it wiped out the whole world. Even the majority of the ground under his feet is gone. Over the course of the game, as you try to help The Kid rebuild his world, you get more info about The Calamity and the world it affected. It’s an engrossing tale, and I appreciate that its participants are not simply “good” and “evil.” But what makes the story even better is the way in which it’s told. As you progress through the game, your actions are narrated by a man with one of those perfect voices (like mine, of course). And it’s not just a fixed narrative or cutscene — what he says is cued off of your actions. For example, take some time to break everything in sight, and he’ll say something like “The Kid just raged for a while.” And no matter your weapon of choice, the narrator’s got a comment on its usefulness. Obviously, there’s a limit to the options, but it feels very organic, and it contributes to a feeling of immersion by showing that the game is actually paying attention to what you do.

There aren’t many humans along The Kid’s journey, but there are still plenty of foes in his way, and he’ll have to take them down in order to fulfill his quest. He starts out with just a sledgehammer, but as the game progresses, he gathers quite an arsenal of both ranged and melee weapons, all of which are upgradable. You can equip him with any two at a time, and the developers have done an amazing job of providing you with a group of weapons that will suit any playstyle. Machetes and a bow feel very different from a mortar and a pike, and every weapon is a viable choice when paired with something that complements it well. The weapons have been tweaked a bit from their PC and XBLA versions, and I prefer the iOS incarnations to the originals; particularly the war machete, which really didn’t need to be throwable. Combat is fast, fun, and deadly, and even at the end of the game, when I had turned The Kid into a walking engine of destruction, I knew that my skill was crucial to keeping him alive.

Fortunately for The Kid, both my skills and Bastion’s controls are up to the task. The iOS version includes two control styles: you can use a virtual joystick or tap a spot on the ground to walk there. I tried both and quickly decided that the virtual joystick was for me. It feels easier to ensure that The Kid goes exactly where I want and dodges in the direction I intend. The original versions had two attack buttons that allowed you to jump instantly between weapons, but the iOS has replaced that with a single attack button and a smaller weapon switching button. It’s an unfortunate but necessary evil of working with a smaller screen, but after I got into the game, I found that it rarely bothered me. On the up side, the game does an excellent job of targeting enemies with ranged weapons — a vital thing to get right in an action-heavy game like this.

The original versions of Bastion looked amazing, and even on the small screen of my iPhone 4S, it’s still gorgeous. This game bucks the modern trend of brown-on-brown by throwing bright colors everywhere you look. A set of enemies between whom you can quickly differentiate are built up over the course of the game, which helps keep the action flowing by ensuring that you never have to stop and squint to see who you’re fighting. The foreground shows a set of consistent architecture and plant life, and the backgrounds behind the world that forms up under The Kid’s feet look hand-painted and fit well with the levels they underlay without ever distracting you from the action you need to focus on.

And somehow I’ve gotten this far without mentioning the music. I know I’ve done nothing but gush about this game, but I’m not quite finished yet. Bastion’s music is stellar. Nearly all of it comes at a quick tempo, with a few exceptions that stand out as intentional breaks from the action. There are a number of different sets of instruments at work, but the standout sound for me is the recurring acoustic guitar. The Kid, the narrator, and the game as a whole have a sort of “Wild West” feel without being overtly cowboy-related, and what better companion is there for that atmosphere than acoustic guitar? None that I can think of.

Bastion has been a critical darling since its original release, and with good reason. There is no element of this version of the game that I can point at as a true flaw. On PC, I didn’t love the controls, and some of the weapons didn’t work quite the way I’d like, but the way those things have been tweaked for iOS makes me very happy. Even the game’s relatively short length works better on a mobile device, where an 80-hour experience isn’t what most gamers are looking for. As I led off by saying, if you enjoy action RPGs and have an iOS device, you should buy Bastion. It’s a little pricier than many games in the mobile market, but it is absolutely worth the money.

An already great game made even better.