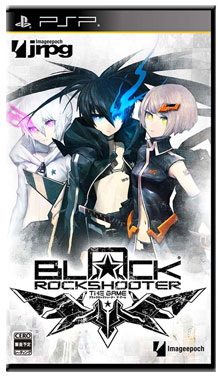 I’ve only recently started to get into anime, and there are things about the genre that I really appreciate. Chief among them is the fact that most of the shows I’ve watched have a defined end point and plot arc. With only 8 episodes, Black Rock Shooter is an anime that certainly seems to fit that bill. And now it is also a video game, which seems like a logical extension for many anime series.

In the game of Black Rock Shooter, you play the title character, a girl who is somehow more than human but who is the last hope for the human race. Earth has been invaded by aliens, and there are only 12 humans left. They’re all male, and BRS’ job is to defeat the aliens, not breed with them, so I’m not really clear how the human race has any hope at all of survival even before a few of the 12 get killed in the first mission. It’s not an auspicious start, and unfortunately, the plot really doesn’t get any better as it goes along. BRS’ efforts to learn more about herself are mildly interesting, and the invading aliens could have generated something worth seeing, but they fail to do so. Wasted potential abounds.

Part of the reason that so little happens is that the game is very short; it only takes 10 to 12 hours to beat. It consists of five chapters with five short missions each, plus one chapter of two short missions. After you’ve completed a chapter, you can play an extra mission that is essentially the whole chapter at once without save points along the way. The only objective of doing so is to unlock artwork that you could see in higher resolution online, so unless you need to level up, there’s no reason to play the bonus missions.

The missions themselves are almost all identical. BRS is in a set of corridors, and there are some enemies between her and a miniboss. Some of the corridors are made of ruined buildings in a generic city that is supposed to be San Francisco or Tokyo or the like, but the buildings are flat and featureless, and you never feel like you’re actually in the place the game claims. In each chapter, beating a certain number of specific enemies unlocks a reward like increased attack or a new skill, but you rarely have to make any effort aside from simply fighting anyone who appears in front of you to achieve those goals.

In combat, BRS can shoot, defend, dodge, or use skills, each of which has its own cooldown timer. Most enemies are palette swaps of each other, and their designs aren’t very impressive to begin with. Blocky robot dog, blocky robot wasp, amusing giant blocky robot hand sticking out of the ground, and so on. Their attack patterns vary little, and once you have unlocked a few skills, you’ll develop one strategy that will take you through almost every battle without any trouble.

The chapter bosses are the only place where the game actually makes you sit up and pay attention. They have interesting designs, they differ greatly from each other, and they each have their own unique attack pattern. The fights still aren’t amazing, since the one strategy you develop for normal enemies will probably serve you well against the bosses as well, but they are the bright spot in an otherwise dull gameplay experience.

The game’s few spoken lines are fully voiced in Japanese, and I assume the actors do a fine job. (Since I don’t speak the language, it’s hard to gauge.) The translation is good, although there are a few typos here and there. Musically, I barely noticed that the game had a soundtrack. We’ve got a fairly positive review of the soundtrack, and when I looked at it after playing the game, I was surprised to see 30 tracks. (I would have expected far fewer.) The couple of pieces that caught my ear as I played were fine, but they definitely failed to make a difference in my overall enjoyment of the game for better or for worse.

It’s always good to see Japanese games unexpectedly make it to the US. In the case of Black Rock Shooter, the localization is just fine — it’s the original game that’s weak. After you beat it, you can go back and play extra missions with new goals, but with boring combat and a weak story, you have no real incentive to do so. Unless you really loved the anime upon which this game is based, I’d save your money for something else. BRS is not actually broken, but there’s nothing about it that will make you glad you put even 10 hours into it.

If you loved the anime, you might enjoy this game. Otherwise, save your money.