And while this sequel maintains much of what made the first game so memorable... Boktai 2 takes the series in a decidedly more role-playing direction. 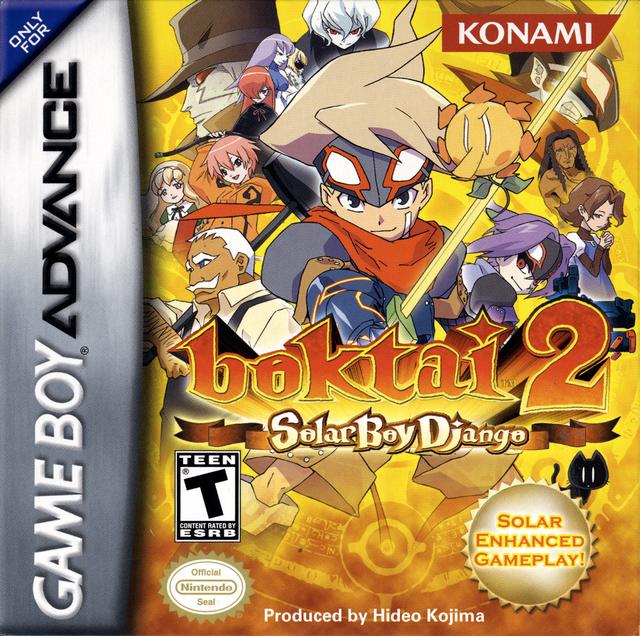 A whopping 12 years separates the launches of the Game Boy and the Game Boy Advance. For 12 long years Nintendo reigned as the indisputable king of handheld gaming largely because the competition just couldn’t match the Game Boy’s competitive $89.99 price tag and consistently churn out premium titles. When it came time to develop a successor console, the Big N wasn’t looking to reinvent the wheel, but rather stick to what made the Game Boy a runaway success in the first place, ergo affordably made, affordably priced.

The Game Boy Advance launched in 2001 with an MSRP just under $100, which made it an enticing buy with its vivid 32-bit graphics and ergonomic portability. There were, however, sacrifices made to hit that magic number, namely the exclusion of a backlight. While the GBA offered a large spectrum of color, deeper hues like those found in Castlevania: Circle of the Moon could only be enjoyed in the best of lighting. As one of the most (if not the most) notorious example, CotM was scrutinized for its dark aesthetic, making an otherwise great game nearly unplayable without a lamp close by, a mistake Konami would not make twice.

Enter Boktai, the world’s first sun-reliant video game. A GBA curio from none other than Hideo Kojima, Boktai is a fitting synthesis of tactical stealth and vampire slaying action wherein players must venture outside to absorb UV rays via the game cartridge’s built-in solar panel to power the protagonist’s Gun del Sol. Despite its unabashedly gimmicky nature, people found it hard to fault Kojima for thinking outside of the box. Boktai did, after all, technically circumvent the no backlight problem, and seeing Castlevania through the lens of Metal Gear was just crazy enough to pique interests. It didn’t set the world on fire, but Boktai clicked with audiences and ostensibly sold well enough to constitute sequels.

Django returns in Boktai 2 with his sunflower companion Otenko to liberate the city of San Miguel from a deadly foursome of Immortals. The familiar duo are quickly stopped by an menacing cloaked man who snatches away the Solar Boy’s fabled weapon, leaving poor Django to seek out other means of vanquishing the undead. And while this sequel maintains much of what the first game so memorable — the solar-powered mechanics, the isometric stealth-infused action, the macabre take on spaghetti westerns — Boktai 2 attempts to take the series in a decidedly more role-playing direction.

A skill-based weapon system replaces the oft-lauded gunplay of Boktai, introducing swords, hammers, and spears as well as bare fists. Utilizing each gradually increases Django’s skill for that class of weapon, enabling him to wield and forge higher level equipment. A touch of Gun del Sol still lives on in the melee weapons, though — they, too, can be enchanted with magic to deal elemental damage and solve environmental puzzles. But while the solar gun handled well from a distance, Boktai 2’s melee weapons struggle to keep up with the demands of close quarters combat in an isometric perspective.

What really hurts these weapons is their short range and clumsy feel. Django can’t move while attacking outside of changing in four directions, so taking on hordes of enemies can prove challenging without finesse, and that goes double for bosses. Fortunately, the game’s new RPG-like systems mitigate this problem by allowing players to level up the Solar Boy’s innate stats and temper more powerful weapons to their liking. Even if melee combat doesn’t reach the same heights as Boktai’s gunslinging, being able to customize your experience down to your weapons’ durability largely compensates for any nagging issues that may arise in the heat of battle.

Unlike his last adventure through the branching wilderness of Istrakan, Django is now surrounded by a large supporting cast of townsfolk that aid him in his quest. Now players can easily purchase items and equipment with solar energy at any time, a much-appreciated convenience that didn’t exist back in Boktai. Players also have the option of extracting NPCs (including one very familiar looking box salesman) from within mini-dungeons to unlock additional town extras and secrets. Suffice to say, the more players progress, the more bustling San Miguel becomes, offering Django a well-deserved place to kick up his heels in between his duels to the death with vampiric forces.

Dungeons, as a whole, prove to be pretty hit or miss. Their key components remain intact from the first game — cryptic hints, block pushing, trap rooms, and so forth — with some newly introduced mechanics like transformations and enchantments that broaden the puzzle gameplay… in theory. In reality, Boktai 2 too often boils down to using elemental magic, cleverly activating switches, or transforming into a mouse or bat while other interesting mechanics like Freeze and Dash fall by the wayside before ever realizing their potential. As result, the later dungeons in particular can feel a bit uninspired puzzle-wise, if not redundant, especially if this is your second Boktai game.

Perhaps what’s most shocking about Boktai 2 is how it downplays the role of the sun. After the third dungeon, Django learns an ability called Rising Sun which conjures four bars of artificial sunlight for about 30 seconds, admittedly a luxury on cloudy days or for places with poor sun exposure. But 30 seconds is more than ample time to solve most of the game’s sun-reliant puzzles, thus diminishing the player’s need to go outside save for purifying Immortals during the Pile Driver segments. By no means does this exploit ruin the game (it probably enhances Boktai 2 for most), but it seems odd to introduce an ability that effectively negates the series’ mantra of harnessing the sun.

Despite a few questionable changes, Boktai 2 largely remains faithful to its predecessor’s legacy, and in many ways improves upon it. The RPG elements bring in an increased depth to the game’s systems while retaining much of what made the original Boktai so enjoyable. Few games can hold a candle to Boktai 2’s beautiful chiaroscuro spite work or its energetic Morricone-inspired soundtrack, both being remarkably impressive coming from a mere GBA game circa 2004. Between its seven deadly Immortals and long list of optional content, prepare to sink your teeth into Boktai 2 for at least 15 to 20 hours, and soak up some vitamin D while you’re at it — unless you’re a vampire. In that case, you don’t have to.

Controlling melee weapons is clumsy, some solar-powered mechanics are underutilized.

A worthy follow-up to Boktai that benefits from newly implemented RPG systems, but the retooled combat leaves something to be desired.