...the comical presentation keeps the game interesting and lively. 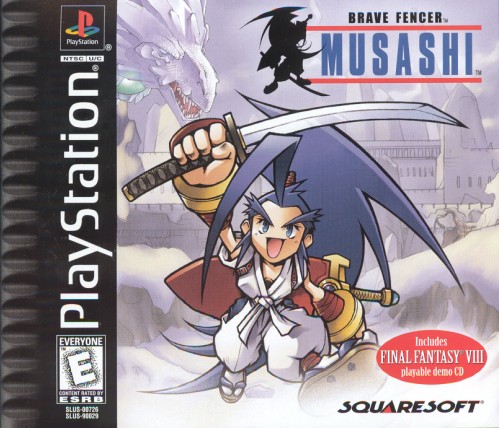 The story begins in the basement of Allucaneet castle, where young Princess Fillet and her advisors are facing a grave situation. The tyrannical, ambitious Thirstquencher Empire is about to lay siege upon Allucaneet castle in hopes of expanding their boundaries. The only means of fighting the Princess has left is the legendary “Hero Summon” spell. This magic has been passed down from Queen to Princess for centuries, only to be used if it is absolutely necessary, and the fast thinking Princess Fillet has jumped to the conclusion that now is that time. She casts the spell, and to her surprise, the “hero” it produces is Musashi, who immediately comes off not as a hero of legend, but as a punk samurai with an attitude problem who doesn’t look or sound a day over 12. Despite his voice and appearance, the Princess reluctantly accepts Musashi as Allucaneet’s hero and sends him on his first mission: to retrieve the legendary Lumina sword.

The story begins to unfold when Musashi returns to the castle (now wielding two swords) to find that Rootrick, a Lieutenant from Thirstquencher, has taken the Princess hostage and begun an attack on the castle using a giant steel robot. After Musashi successfully drives the steel giant out of the kingdom, he soon learns that he has his work cut out for him: he must find Princess Fillet, restore the power of the Lumina sword, and end Thirstquencher’s invasion.

As the game proceeds, Musashi will perform a series of tasks to keep the kingdom and neighboring Grillin’ Village safe as well as find the 5 scrolls of Lumina. The flow of the events is very linear, but there are a few hidden items and chances to explore freely. Each event introduces new characters, new places to explore, and new abilities. Some events will appear irrelevant at a first glance, but they all tie in to the big scene.

Although the story of Brave Fencer Musashi is fairly simple, the comical presentation keeps the game interesting and lively. Brave Fencer Musashi is intended to be a funny game, as it is filled with jokes and strange characters everywhere from townspeople to the main plot and even on item descriptions. Common subjects for the jokes include food, as all people and places in Allucaneet Kingdom are named after food, for example Princess Fillet, Grillin’ Village.

Other subjects of fun include the characters themselves. For example, characters can’t help but laugh at Musashi, a 3-foot tall kid trying to stand up to villains twice his size. Brave Fencer Musashi contains many other funny characters with peculiar appearances and personality traits. My favorite is Topo, a cute but evil girl with mouse ears and a tail, who has a fetish for dancing.

Accompanying the funny story of Brave Fencer Musashi is solid Action RPG gameplay. Primarily, Musashi explores terrain, fights monsters, and searches for items. The game has a somewhat small amount of enemies, but the challenge is still pretty good. Most normal enemies can be eliminated by simple hack and slash techniques, but boss fights require Musashi to find weak spots and observe attack patterns.

In addition to traditional battles and exploration, Brave Fencer Musashi contains several sub-games. Sub games require speed and split-second timing, and a few are reminiscent of other video games. For example, in one sub-game, Musashi must ride a raft down a waterfall while dodging traps and reaching for items, a concept seen in games such as Sonic the Hedgehog and Donkey Kong Country.

Brave Fenecr Musashi uses the concepts of time of day and fatigue. As time goes by, it becomes afternoon, evening, nighttime, and a while later, sunrise and a new day. Also over the course of time, Musashi grows tired. Tiredness can be reduced either by sleeping or by eating mints. If Musashi gets too tired, he will move slower and fight less effectively. If he continues to go without sleep, he will eventually pass out for a while, leaving him vulnerable to enemy attacks if he is in the wrong place.

With his 2 swords, Musashi can perform a wide variety of attacks and multi-hit combinations. At first his arsenal is small, but as the game goes on, Musashi learns new actions and attacks. Musashi’s attacks include throwing enemies into the air and impaling them on his Lumina sword, spraying enemies with fire or bubbles, and a powerful spin strike. Late in the game, Musashi gains the abilities to double jump and climb walls. One of Musashi’s most important special abilities is absorbing enemies with the Fusion sword. When Musashi absorbs an enemy with Fusion, he gains the use of one of that enemy’s powers. Musashi can only have one monster ability at a time. Frequently, these abilities are required to get through certain areas, as they can be used to break walls, ward off enemies, and hit distant targets. All enemy abilities require BP (Bincho Points) to use.

Exploration plays a very important part in Brave Fencer Musashi. Every area has Minkus, Bincho Fields, and Treasures to find. Minkus are small, sheep-like critters that possess Longevity Berries. If Musashi catches a Minku, it will drop its berry, and Musashi will gain 25 more max HP. Bincho Fields contain a citizen of Allucaneet Kingdom trapped inside. Musashi’s Lumina sword can dispel these fields, which gives him 5 more max BP and, depending on who he freed, he may gain new items and abilities. Finally, the treasures hidden in the game are sometimes just healing items or money, but sometimes the items will give Musashi new powers.

Musashi grows in power by defeating enemies, and for simply walking. Instead of one experience level, Musashi has 5 different levels. His Body level is a measure of Offensive Strength, and it increases when Musashi defeats enemies. Mind determines Defense, and increases when Musashi walks. Fusion and Lumina levels indicate the strength of Musashi’s swords; these levels grow when Musashi uses the respective swords. Finally, Musashi has an overall level, which is the average of all the other levels.

Control in Brave Fencer Musashi can be tricky, but it’s not too bad. Some of the attacks can be hard to execute at first. Movement is fairly accurate, and the option of analog control is useful. With a little practice, players can master the control. Still, Musashi may seem accident prone sometimes.

Brave Fencer Musashi is Dual Shock compatible. The vibration is fairly weak compared to other compatible games, but its better than no vibration at all.

Brave Fencer Musashi takes place in a brilliant and well detailed 3D world. Characters are polygonal, and backgrounds use texture-mapped polygons. Musashi and the citizens of Allucaneet are small, while the enemies, especially the bosses are very large. This helps to make the enemies look more dangerous and increases the illusion of a mismatch between little Musashi against a giant beast. Facial textures on most characters except for Musashi are lacking, but this is compensated for by the character’s face portrait appearing in the speech box. Musashi also looks less blocky than the other characters.

Most areas can only be viewed from one angle, but the view of Grillin’ Village can be rotated. The buildings, such as the houses and stores in the village and the palace of Allucaneet, fit the setting of a medieval kingdom perfectly. The insides of all structures, such as the ice castle, the tavern, the hidden tombs, and even Musashi’s bedroom are all decorated with appropriate furnishings. The organic settings, including a forest and a mountain with a waterfall, are also excellent. Trees, leaves, and water all look natural, and they don’t have a blocky appearance like the characters and enemies. Finally, the lighting effects are top notch. Square did a fine job presenting the candlelight in the dungeons, and the transitions from day to night.

Brave Fencer Musashi features excellent audio. The music used for the town, the creepy forests, and the castles and dungeons is enjoyable and fun to listen to. Most of the music is exciting and has a fast tempo. My personal favorite song from the game is the music used for Topo’s dance, which may not sound much like typical dance music, but it’s bouncy and enjoyable.

The sound effects are also great, and the sounds used for clashing metal and explosions were especially realistic. Finally, the voice acting was pretty good. While the quality of the acting wasn’t as good as famous dubbing jobs like Lunar and Metal Gear Solid, the cast conveyed the emotions and personalities of the characters effectively. The acting is exaggerated sometimes, but that was done to make the game funnier.

If you’re looking for more modern Action RPGs, I’d totally recommend picking up Brave Fencer Musashi. Also, if you laughed playing Lunar or Thousand Arms, there’s a good chance this game will tickle your funny bone too. With an MSRP of only $20, this game’s a great deal.