The plot of Café Enchanté is quirky and clever in the best of ways... 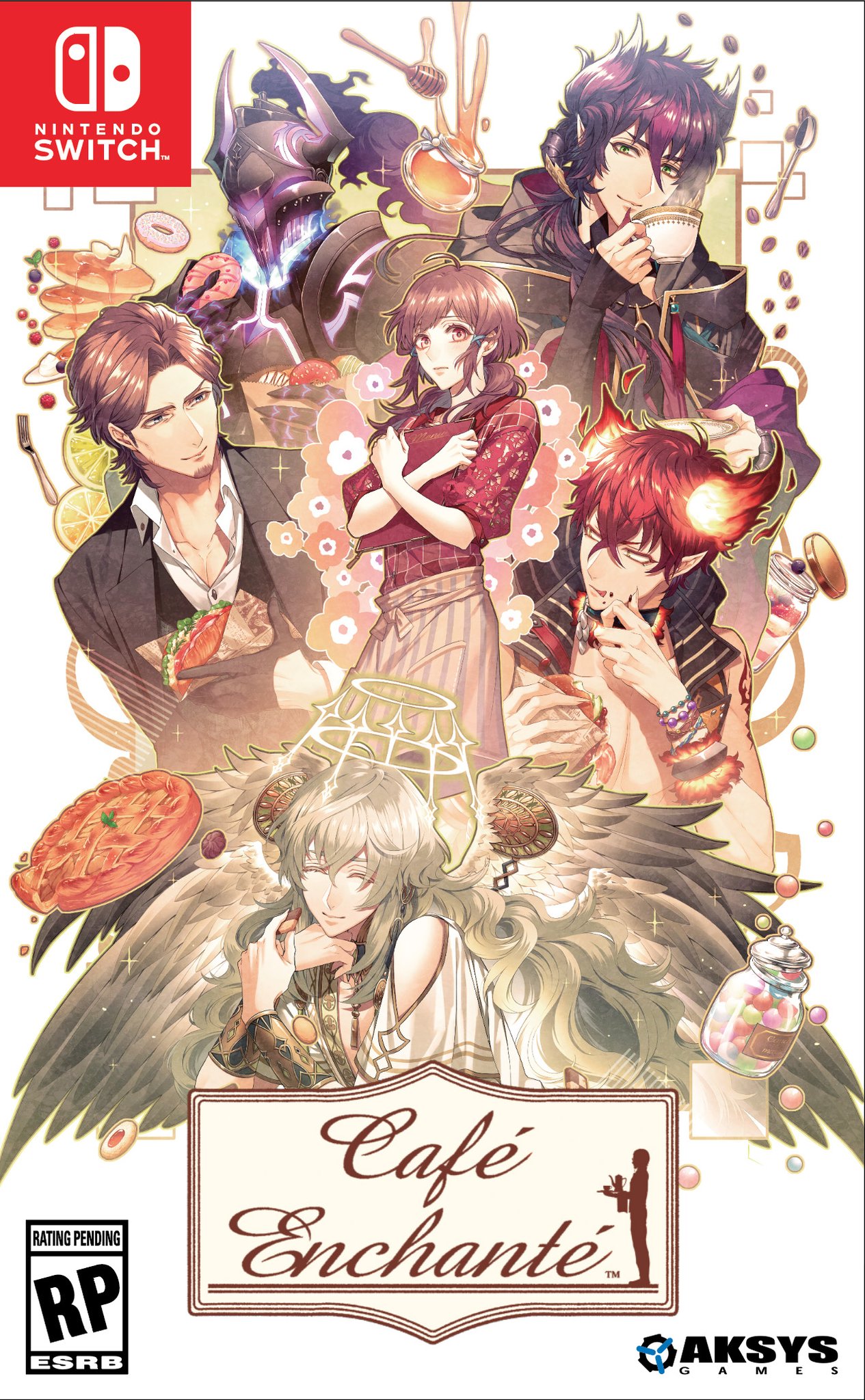 Depending on the time of day and given the stresses of everyday life, a simple cup of coffee can take on a magical, perhaps even otherworldly quality. This is especially true if the location where you get such a brew happens to be equally special and accommodating. Café Enchanté is an otome visual novel that drives that sentiment home by adding a fantastical and supernatural element to the concept of getting that perfect, magical cup of joe.

At the start of Café Enchanté, main character Kotone has just inherited her late grandfather’s titular café. As she visits in an effort to decide what to do with the property, she encounters a strange door. Naturally, this door is for patrons who visit Café Enchanté from otherworldly realms, so Kotone soon discovers that her grandfather’s regulars consisted of a demon lord, a fallen angel, a firewolf, and a headless knight. This eccentric cast of characters would love nothing more than to see the business continue in some capacity or another. Throw into that eclectic mix a government agent sent to observe the non-human regulars, and the bachelors of Café Enchanté have made their grand appearance.

Café Enchanté effortlessly combines slice-of-life elements such as Kotone dealing with the stress and anxiety of a horrible past job while learning how to handle the everyday operations of a café along with the supernatural. The transition from one story element to another is delivered so seamlessly that you won’t even bat an eye when conversations stray from iced coffee to visiting a snowy world full of demon beasts. The game’s plot is quirky and clever in the best of ways, and I genuinely enjoyed its various story beats.

Café Enchanté’s cast of characters is where the visual novel truly shines. Kotone is a great otome heroine, as her reactions to everything happening around her are quite believable and fitting for the situations she finds herself in; I personally loved her inner strength and ability to voice her opinions so earnestly whenever it was needed in the narrative. The five bachelors of the game all stand out as incredibly fleshed out and detailed characters on their own, with a special place in my heart going to the headless Canus, the fiery Ignis, and the otome-loving Il in particular. Side-characters such as the opinionated Vennia, middle-schooler Kariya, the eccentric scientist Mikado, and the exceedingly cute Demon Beast Kororo nicely round out the cast. I loved certain plot reveals involving the cast and how everyone reacted to them in each route, as they helped add another level of depth to already fleshed out characters.

Character designs and artwork for Café Enchanté are colorful and gorgeously illustrated, while the cafe itself has a warm and inviting feel. The various worlds traversed over the course of the visual novel’s narrative all have distinct and fantastical qualities to them, to differentiate these locales from the café. I even appreciated the way the UI and text boxes were designed to give a sense of a classical cafe’s menu. The visual novel illustrations were plentiful and lovely to gaze at.

Voice acting in Café Enchanté is done entirely in Japanese, and the actors do incredible emoting work. Of special note, I’d love to specifically mention Dromi, as his story arc goes in an unexpected direction and his voice actor wonderfully captures the changes, though everyone does an incredible job in their respective roles. The music is quite fitting for each and every scene. It’s easy to feel relaxed by the music that plays when Kotone and the others are strolling through town or enjoying a drink at the café, and likewise easy to feel the intensity when action sequences and more dramatic moments occur.

The game itself is comprised of a fairly large Main Route that offers insight into all of the main cast as Kotone learns how to manage a café, with decision points throughout those initial eight chapters to determine whose route ultimately unlocks. This is a big boon in some respects because you get a strong sense of who everyone in the cast is before locking in a romance choice. However, Café Enchanté’s biggest weakness is probably that you have to replay the Main Route several times if you wish to see every possibility. A story map of sorts unlocks after beating a route once, but it is mostly useful for seeing different versions of a character’s ending that you’ve already cleared. I had to use multiple saves to jump through chapters quickly and to reach key choices in order to see different routes. I ended up making use of the game’s Skip feature after my first playthrough of the Main Route. Even then, getting through the chapters takes time: they are quite text-heavy. By comparison, each unlocked character route feels much shorter, which is a bit odd as you’d normally expect that to be the meat of an otome instead.

There are quite a few glaring inconsistencies in terms of Café Enchanté’s script translation, though I found the localization enjoyable for the most part without detracting too much from my playthrough. There are spelling and grammatical typos occasionally throughout each route, and I noticed that certain things, such as character or group names, would change as if there hadn’t been a consistent translation for them. For instance, Vennia sometimes has a different name throughout the Main Route, and Kororo would sometimes be misspelled as “Kokoro” in certain scenes. Likewise, Kororo’s gender seemed to fluctuate depending on whatever respective scene Kororo was in, and the name of their species actually changed at the end of Ignis’ route entirely. With that in mind, there were also some really great instances of strong translation, such as using gender-neutral terminology for Vennia until the question of their gender identity is carefully brought up in the plot. The dialogue flowed naturally through the story and the banter between characters was truly enjoyable. It’s just a shame that sometimes the localization inconsistencies came across as so noticeable.

At the end of the day, Café Enchanté is a charming and, dare I say, enchanting take on the otome genre. Much like a delicious cup of coffee, I immensely enjoyed my time with the game and its quirky cast of characters. The tonal shifts in the plot at times could be surprising, but ultimately made the story stand out all the more. This is definitely the type of refreshing visual novel I wouldn’t mind having a refill of.

Just like a warm and inviting cup of coffee, Café Enchanté is a delightfully charming otome adventure.