...Just enough jokes, twists, and awkward moments to remind you of high school. 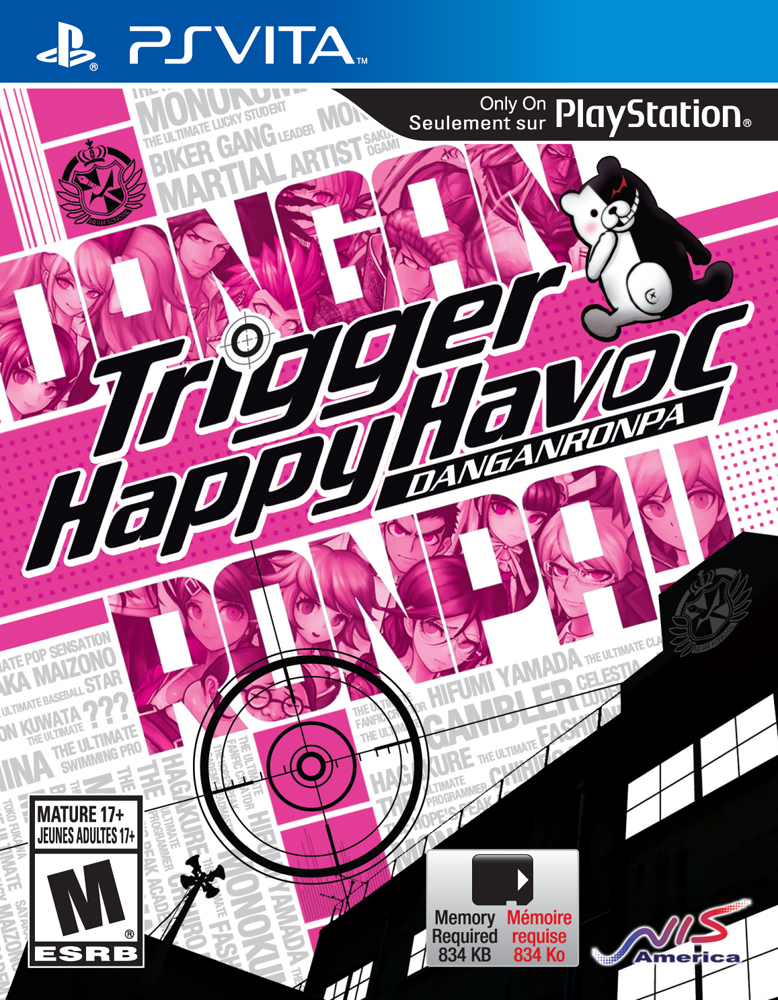 With the popularity of The Hunger Games and the cult classic status of Battle Royale, the concept of high school students set upon each other isn’t a brand new concept. What if there was a twist, though? As opposed to battling to the death, the students are told they can live a peaceful, communal life at their school forever, but to escape, one must not only murder a fellow student, but get away with it to “graduate,” as well. It’s not just escape for the murderer, though; if the other students don’t solve the mystery, they’re executed and the game is over.

Enter the life of Makoto Naegi, the one everyday student selected to attend Hope’s Peak Academy, an elite school containing the best-of-the-best, the “ultimate” students in a number of fields. Japan’s rising baseball star, the number one fan fiction writer, and a genius programmer are among the fifteen students who find themselves ensnared in this deadly game, tormented by a robotic bear headmaster named Monokuma. Which classmates can be trusted?.

Danganronpa: Trigger Happy Havoc is very effective setting up its tone and environment. Hope’s Peak is very clearly a school, but the metal plates riveted in place to block the windows, the disheveled contents, and the locked-off portions are quite foreboding. Despite being a visual novel, animation and artwork is used often, with both the papercraft-style characters that fill the hallways and the action sequences found during trials, murders, and even executions. Outside of these sequences, though, there’s little aside from the adventure game norm – headshots of characters with different emotions and a wide variety of environments.

While the standard issue visual elements aren’t groundbreaking in any way, they combine with the sound effects rather well to demonstrate emotion. An angry face with a minor-key tone does wonders to back up the text when there’s no voice acting. A particular character’s moans, groans, and laughs do grate by game’s end, but it’s a minor quibble. And while only major scenes are voiced, it’s almost always effective.

But while the supporting aesthetics are important, they end up being worthless unless the core content is worthwhile, and with the exception of Danganronpa’s mini-game content, there’s not much to stress about. Most of the characters begin as simple tropes, like the overweight otaku, spoiled rich kid, and the vapid popular girl, but those who stick around have a little bit more depth. You can spend additional time with characters you’re interested in, akin to Persona’s social links. Gift them something they like from the school store and a scene will follow. Some characters don’t retain their depth – especially if they find their demise in the early chapters – but unlocking the secrets of different characters alongside bonuses during trials is well worth it.

Despite any shortcomings, each character gloriously plays their role in the story and meaty twists and laugh-out-loud jokes happen just often enough. The overarching narrative is gripping, and individual investigations play out similarly to Phoenix Wright, where individual facts lead you down a rabbit hole. Characters must be spoken to, environments must be inspected, and evidence must be collected. Some things end up being predictable, as even some of the bigger surprises are heavily foreshadowed, but I never felt disconnected from the mystery.

Luckily, investigation is streamlined to the point where there’s no pixel hunting or needless backtracking. A single button press lights up all objects that can be investigated and each person that can be spoken to, and you can’t leave a room until everything you needed in that room has been found. Even if you need to jump between floors, the map allows you to jump between floors at will, assuming there isn’t a story sequence in a hallway. It does sap a bit of the challenge, but it was nice to be able to focus on the trial rather than finding the one object I’d missed two floors down.

Once the class trial begins, each piece of evidence collected takes the form of a “truth bullet,” which can be fired at any number of phrases in a piece of testimony. Find the contradiction, move to the next testimony. It’s similar to Phoenix Wright, except there is a timing element to it. As well, things like moving phrases and “white noise” will appear in later trials, providing a challenge to overcome. Unfortunately, this, alongside the rhythm mini-game used to overcome a character who won’t listen, and an incredibly simple spell-a-word-by-firing-letters-out-of-the-air mini-game, are all rather tedious. If I were to replay Danganronpa, I’d most certainly set the difficulty of these segments to easy, as they don’t add much to the experience.

The only thing I found redeeming about the mini-games was the ability to save one piece of testimony as a truth bullet to fire at a different piece. Not only did this add a little difficulty in figuring out contradictions, but it kept me interested in every bit of the testimony. If only the other segments had been as finely tuned, I wouldn’t have a complaint about the trials. Unfortunately, tapping away “white noise” and moving a cursor aren’t exactly taxing on the grey matter.

It’s worth noting that Danganronpa has post-game content, which is a bit odd for a visual novel. Rather than make you play through trials over and over again to access characters to talk to, Danganronpa provides “School Mode,” a simulation game in a much happier version of Hope’s Peak. Monokuma isn’t a sociopath and you have 50 days to build some backup versions of him in case of emergency. While the simulation portion is quick and painless, at the end of each day you can spend some time with a classmate of your choice, ingeniously keeping you connected to the characters from your adventure.

Despite a few shortcomings, I had nothing but a blast with Danganronpa. I’m excited for the possibility of seeing a sequel localized. Spike Chunsoft’s name might be most recognizable to English-speaking audiences with 999 and VLR, but Danganronpa is an entirely different experience – in a good way. With just enough jokes, twists, and awkward moments to remind you of high school, I can’t help but recommend Makoto’s journey to Hope’s Peak Academy.

One of the best visual novels available in English, despite some hiccups.