I never thought I'd find a game diminished by its RPG elements, and yet here it is. 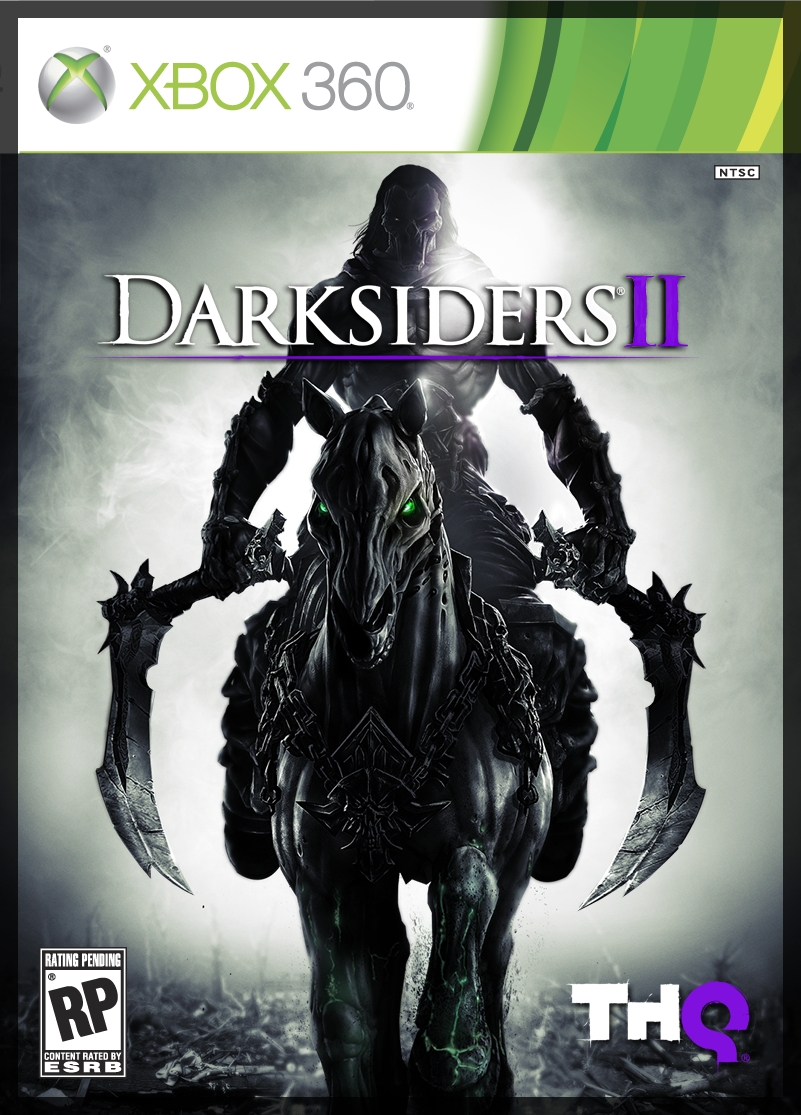 Darksiders II has come to symbolize in my mind all that is stagnate and rotten here at the end of a console generation. Darksiders II might be called an encyclopedia of fatigued game mechanics bound in an admittedly handsome hide. Not only a sequel deceptively similar (and inferior) to its predecessor, Darksiders II is also a game founded upon antique, conventional, and downright crude design.

The Horseman Death seeks to redeem his brother War after some sort of cosmos-altering action. The enormously silly, yet endearing comic-book style mythos from the first game returns, but that single sentence serves as a fair synopsis of the slender narrative, mired as it is in a fetid swamp of fetch quests and poor storytelling. Indeed, I could never determine how this game’s story relates to the first game’s, and the relationship between various factions and peoples is needlessly bewildering. Although presented as a cool, arrogant, and demanding protagonist, Death manages to be less charming than his calmer brother. The supporting characters are equally mundane, if amusing and brought to life with passionate voice acting. Ultimately, the plot stays submerged for most of the game, and the cast can’t elevate it above the hoard of compulsory fetch quests.

Enter Darksiders II’s first major misstep. The fetch quests replicate like some base organism, one splitting into two others until they cover a vast surface, that surface being the game’s rather robust world and play time. The mandatory quest line consists of various three-part fetch quests like some unimaginative fairy tale, and the side quests are variations on this dreary theme. I love collectables as much as the next RPG enthusiast, but these aren’t particularly memorable or creative Totally Arbitrary Collectible Objects. In an alternate dimension, Darksiders II might be a parody of an exhausted gaming trope for how often and consistently the developers call upon the fetch quest.

Thus we come to Darksiders II’s most resounding fault: repetition. Reminiscent of the oft-mocked town-dungeon-town formula, the game follows a strict dungeon-dungeon-dungeon pattern instead, as wearying as it is tedious. Dungeons are separated by shallow interstitial zones with impressive names and no character, but these take all of a half minute to traverse. Each dungeon houses the usual mix of traps, puzzles, enemies, and loot, usually culminating in a hit-or-miss boss encounter. Puzzles are as similar to one another as the pieces of loot, and the experience quickly loses whatever iota of novelty it initially had. In short, Darksiders II is boring, and nothing compelled me from one area to the next, which is the ultimate goal of every game. I didn’t finish Darksiders II, but I know I’ve seen just about everything it has to offer.

The player spends an astonishingly small amount of time in combat with various golems, demons, and other entities from all the planes of existence. Battles are fleeting moments of excitement in a game full of wandering and frustrated puzzling. A God of War-ish mix of button mashing, combos, and special abilities, combat feels good, particularly in a room brimming with skeletons or other lesser creatures. A variety of weapons and combos helps prevent overly monotonous battling, although most enemies can be defeated by a few reliable maneuvers. Regardless, to make players spend more time outside of combat than in seems ludicrous. I preferred the somewhat more manufactured enemy waves of the first Darksiders to its sequel’s fewer and more organic skirmishes that terminate all too quickly.

With some exceptions, Darksiders II features convoluted and lousy level design that makes the large world a chore, rather than a wonder, to explore. Dungeons are graceless heaps of rooms and corridors bound together by repetitive wall-climbing and tedious puzzles. They often present the player with a complex room and little guidance, at which point one of two things occurs. First, the player might follow a linear trail of handholds and bruised wall using Death’s acrobatics until something (a lever, a button, a pressure plate) presents itself and opens a door. Second, the player might contend worthlessly against poorly defined puzzles with some nameless quality that makes them infuriating. The puzzles in games like The Legend of Zelda and Okami flow with a certain logic and even grace, but those in Darksiders II collapse under their amateur design. Nor do these clunky puzzles evolve, and the building blocks (levers, blocks, balls, climbable walls) remain largely the same throughout.

I never thought I’d find a game diminished by its RPG elements, and yet here it is. Aside from a Diablo-style loot system, Death now levels up as his brother War never did and even allocates skill points on a tree with two branches. All of this feels embarrassingly out of place. The inclusion of the loot system in particular is an awkward encumbrance during the journey, serving to further muddy an already murky experience. The equipment changeover rate is quite high, which should be good, but I never wanted to sort through all the garbage to find that slightly improved pair of gauntlets because I never noticed a difference between something new and something acquired three hours ago.

In some games, numbers are master, but Darksiders II has the opposite problem: numbers are nebbish. After hours of play, I can’t tell you what leveling up ever did for Death except grant him a skill point. Sure, his hit points probably increased, but I never felt the difference because of this poor relation between the numbers beneath the game and their effect on gameplay. I’d rather have the Zelda rip-off hit points from the first game, which is much more telling of progress than this. Some weapons provided noticeable boosts in power, but the defensive equipment might as well be clothes on a doll. The skill tree feels less out of place than loot and levels, but there are only a few abilities on each branch, and, while extremely effective, don’t evolve in compelling ways.

Darksiders II’s spectacles are visual, not mechanical. Although not the most technically impressive, the graphics are clean, crisp, and breathtaking. Even the pre-rendered backdrops of mountains and enormous trees that might be cheesy in another game are spectacular here. The art style complements Darksiders’ playful mythology and gratuitous action as well, even if the Makers have just the architectural style one might expect from such glorified dwarves. The variety of geography delighted me, although the first world is disappointingly conventional, particularly compared with the post-apocalyptic Earth of the first game. Potent music often accompanies these places of power. Instead of the percussive themes or heavy metal that another composer might have loosed upon the game, Jesper Kyd crafted an eclectic soundtrack with a very full sound. Unfortunately, the excitement of seeing and hearing new locales isn’t enough to drive the experience, particularly when areas are visually stunning, but still lacking in depth and presence.

The PC version seems the neglected outcast, as it lacks the customization options most PC games have. A stink has been aroused about the game’s supposed glitches and failed VSync, but the game ran smoothly for me with the assistance of a support program. I encountered a liquid frame rate without screen tearing or excessive bugs. The mini-map might darken for a spell and the A button might not actually open the world map, but these issues pale in comparison to Darksiders II’s real problems. The experience likely varies vastly machine to machine, however, so beware when choosing a platform.

Although expansive, sometimes beautiful, and occasionally fun, Darksiders II is mediocre at best, a rambling bore of a game and a shoddy sequel. You may have liked the original, and you may enjoy action RPGs, but you’ve played this game before, and not just once. Frankly, I’ve had enough. If developers don’t have any new ideas, they can at least get the old ones right. The original Darksiders felt like the beginning of something good, but Darksiders II just might be an end.

A stale and repetitive action RPG; that rare sequel that is inferior to the original.