DXHR may be billed as a do-it-your-way RPG, but the game certainly favors one approach for almost every mission: surprisingly, stealth. 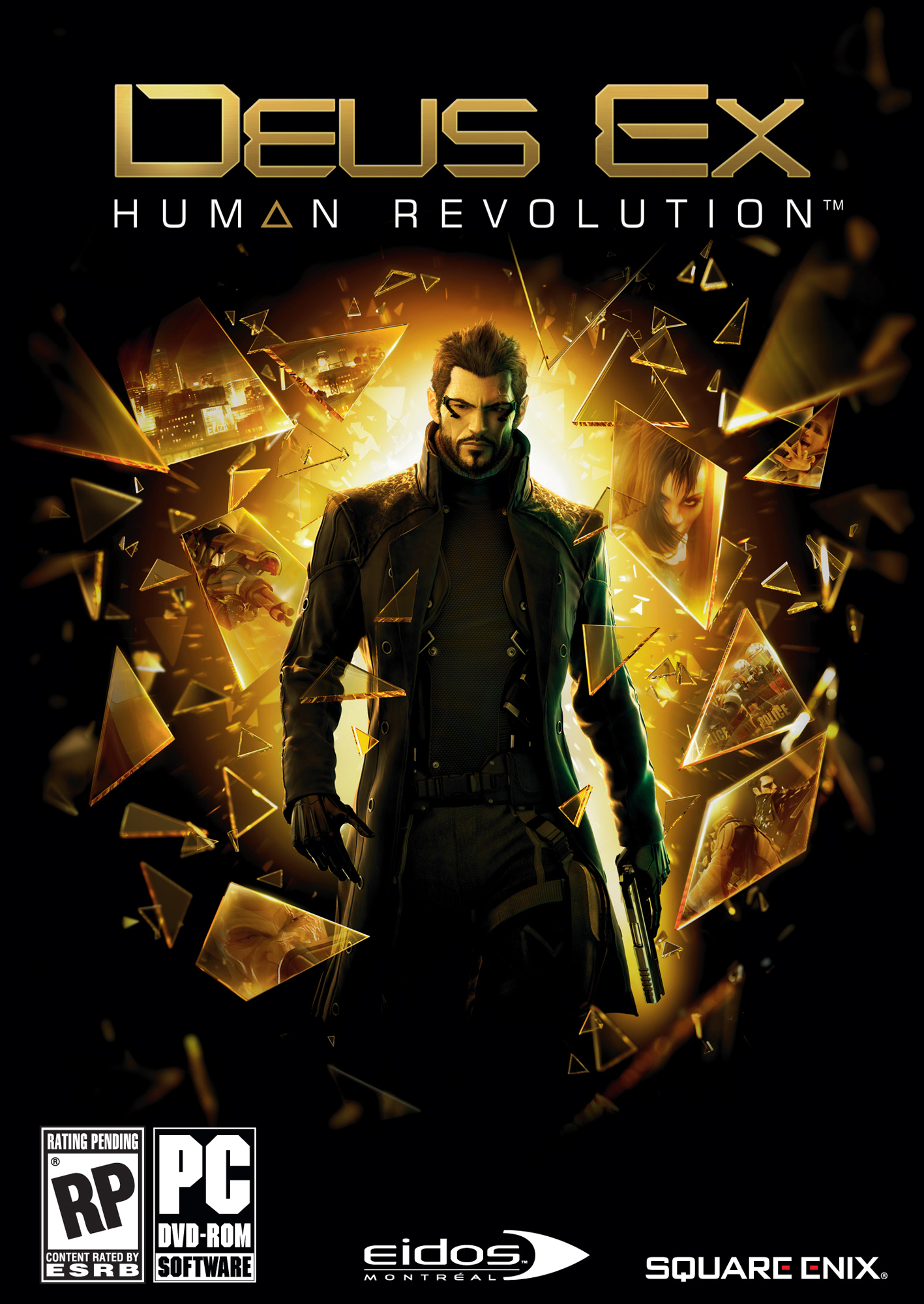 I hear, but do not see, an explosion. I round a corner, and a man rushes toward me, stopped by a cracked window. Green fog surrounds him. He cries out for help. I shut off a valve, save his life, and extract a favor from him as a reward. In clearing a path to exit, I toss a crate aside. It flies out of my hands, careens off another crate, loses momentum, and gently taps my new friend in the head. He crumples, falls; he’s instantly dead. Jensen isn’t laughing, but I am. Deus Ex: Human Revolution comes dangerously close to taking itself too seriously when in reality it’s mostly just a fun video game.

Echoing the classic original, DXHR sprinkles conspiracies and corporate-government corruption over a backdrop of transhumanism doubt and radicalism. The future’s political landscape will be even more complex than today’s when human augmentation joins gay marriage and abortion on the list of issues that make people self-righteous and insane. The plot explores the issue fairly well by detailing the banes and boons of both sides while illustrating just how far-reaching the implications will be. A side quest, for example, explores how augmentation might affect prostitution. DXHR’s intelligent themes challenge the essence of homo sapiens, and only the densest players won’t do some extra thinking after a lengthy gaming session.

While thematically strong, the plot succumbs to poor storytelling, flat characters, and dull dialogue. Without the strong anti-establishment shift of the first game, protagonist Jensen comes off as a tool in the worst sense. As head of security for a successful augmentation corporation, Jensen spends more time taking orders than questioning them in a conspiracy-ridden world. As a player, I was at the mercy of Jensen’s idiotic loyalty; I could not berate my boss when necessary, nor could I toss him out a window. Jensen has a personal investment in the kidnapping that catalyzes the action, but it’s a weak one: an ex-girlfriend. Regardless, the way the narrative unfolds renders the intelligent thematic material ineffective.

Aside from cheesy villains and action movie melodrama, the story defeats its twists by being unabashedly predictable. Jensen requires approximately 20 hours to figure out what it took me about 20 seconds to guess, making him an even less appealing hero. The story arc is pathetically shortsighted and ill-paced as well. With perhaps one exception (Jensen’s boss), the characters are flaccid and boring, rendered almost lifeless by a depressingly mediocre script. The dialogue sounds even less modern than American English spoken in 2011. DXHR’s sequel needs someone with the imagination and ambition to extrapolate our current linguistic trends and create more memorable dialogue.

Atrocious models and animations make characters even less believable, and the voice acting never leaves the average range and dips below it at times. Even cutscenes are awkwardly animated, poorly lit, and grainy. Evidently Square Enix could only be bothered to create misleading cinematic trailers for this project.

Nevertheless, DXHR takes worldbuilding seriously and displays its world with confidence. When the troublesome NPCs are off screen, the world is more convincing. The game’s hub cities are large, multi-layered, and graphically competent. The city of Hengsha commands the same reverence as the pyramids, and the rooms of important people often display aesthetic perfection. Details such as the large black population of Detroit, related emails between coworkers, and Jensen’s apartment decor make the world realistic. The art design isn’t impeccable, however. Cities feel static and dead at times and the world is infused with little imagination. The polished details are simply too infrequent to make much of a difference.

Limited graphics, a restrained soundtrack, and shoddy characters make DXHR’s world very difficult to get lost in, and I shouldn’t even have to try. Despite great effort, there are too many flaws, both on the surface and underneath. The open city hubs are the most immersive segments, and yet there are a meager two of these, one of the most depressing and disappointing aspects of DXHR. Occasionally, the visuals, music, and atmosphere combined to almost knock me off my chair. The oppression was palpable; I felt it enter me. What could have been a perpetual state, however, is instead isolated in rare, brilliant moments.

As a choose your own adventure type RPG, DXHR offers multiple paths built into every level as well as various ways to build Jensen as a character. Although the game eschews a class system, DXHR sticks to a loose combat-technology-stealth paradigm. Should the need arise (and it does), Jensen can stray from one of the paths and pick up skills related to another type of gameplay. This mixing and matching makes DXHR seem more unpredictable as well as more varied and dynamic.

DXHR may be billed as a do-it-your-way RPG, but the game certainly favors one approach for almost every mission: surprisingly, stealth. DXHR features one of the better stealth systems this side of Thief. Great level design full of hidden nooks and serpentine air ducts makes stealth fun and intrinsically rewarding. Extrinsically rewarding as well. Jensen’s intolerance for bullets, the multitude of great stealth-based augmentations, and greater experience awards make it seem as if Eidos Montréal wants players to go stealth. The difference between shooting an enemy and knocking them unconscious without their knowledge can be up to an astonishing 500%. There’s that and the fact that the gunplay just isn’t fun enough.

Firing a gun never feels quite right. There’s no punch, no bloody mess, and poor corpse physics. I had significantly more fun after deciding to remain unseen. Though, the infiltrator route has its issues, and these show core weaknesses in DXHR’s gameplay. Competent, but uneven enemy AI, for example, as well as a lack of evolution throughout the game. Gameplay never changes, and most missions can be completed using the same tactics in the same ways. Always look for an air vent. A disappointing selection of augmentations contributes to the problem. Another silly design decision concerns the melee take-downs. They’re powerful and crucial for survival, but they play out in a brief cutscene, taking away player ownership and breaking the flow of gameplay in an ugly way.

Gameplay is nevertheless DXHR’s strongest facet, and completing missions rarely feels like work. Infiltrating a heavily guarded compound can be fun even without much context. The lack of a compelling reason to complete mission after mission made the experience less satisfying overall, but I always looked forward to getting back into the action. The levels amply reward exploration with equipment, experience, and backstory. The creative hacking mini-game feels genuinely neat, and going with the flow when a guard spots you produces some of the game’s best moments. Being able to survive such missteps is one of DXHR’s greatest achievements. By giving Jensen more power than the usual stealth hero, the game allows players to roll with a mistake, often to greater reward.

I had a few powerful flashbacks to the original Deus Ex while playing Human Revolution. I also had flashbacks to Fallout 3, Metal Gear Solid 2, and other games I can’t quite name. Indeed, at times, it seemed like Deus Ex alluded not to any particular game, but of some prototype video game. Perhaps that dampened the experience the most for me. With so few cyberpunk RPGs, it should be easy for Human Revolution to offer an extraordinary experience. And yet, it feels so familiar. To offer nearly the same gameplay experience that the original did eleven years later without the intelligence, innovation, or fantastic story seems unimpressive. The new Deus Ex is a fun video game, but nothing more than that. No amount of black and yellow paint can cover up Human Revolution’s anonymity.

Major to minor faults in almost every aspect.

A fun, but inconsistent and derivative game that would have been more acceptable a few years ago.