To say Digimon World DS is a game made for fans would be a gross exaggeration; it is merely the sort of game only a fan could love. 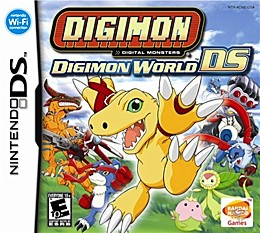 When I was younger, I remember owning a Digivice that I took to school and showed off to my friends. It was essentially the Digimon version of a Tamagotchi. In the beginning, you have an egg and you can’t do much with it, but pretty soon it hatches into a baby Digimon and eventually (if it hasn’t died through starvation or general neglect) becomes a fully digivolved weapon of mass destruction. You may be wondering why I’m bringing up a piece of technology that was a relic even before I came to own one. Two reasons. Firstly, Digimon World DS isn’t really much different from that Digivice I played with as a kid. You still raise and battle Digimon, and it is still meant for children. Secondly, this proves that I have been a fan of Digimon for a long time now, which should give some weight to my rather abysmal score. So let’s sally forth into the world of Digimon with our heads held high, if only so the smell takes longer to reach our noses.

When you begin, the game asks you to choose the hero’s gender and name, provided the name is five characters or less. Luckily, my name fits in rather snugly. After that, the game introduces you to the hero, who is rather bafflingly shocked to discover that his school’s computer room is empty even though school is over. Approaching a PC, the hero illuminates on a rumour circulating through the school that it’s possible to see “mysterious creatures” in computers. Intrigued by this prospect, the hero visits his most trusted search engine, Digisearch (or Google, as we know it), and enters some key words that in our universe would never get you anything close to what you were intending. Thanks to video game logic, however, the hero not only finds a specialist website on the subject, but also opens a portal to the Digital World and gets sucked through the rift between dimensions.

Thus begins the hero’s adventures in the Digital World. Well, I say “adventures;” I really mean job as a common skivvy for the somewhat ungrateful denizens of the Digital World. I’m sure it comes as no surprise when I say the game is very light on plot. Whatever little story I experienced mostly happened near the end of the game, and what I did for the other 90% was not at all relevant. Usually, the only way to advance the plot is to complete missions from the leaders of Digimon Central, which are generally the most contrived and frustrating assignments possible. This is apparent from the very first mission in which the leaders send you to help a Gabumon retrieve some valuable equipment he requires for his shop. This is of such importance that you must battle a tough Digimon just to get to the equipment, and once you finally manage to retrieve it, the Gabumon is so grateful he decides to give you the item as a reward. He apparently had lots more back in his store so it wasn’t actually important after all. This sort of thing happens a lot.

So the quests themselves are pointless excuses to make you travel to different areas while collecting and battling Digimon, but that might not be as bad as you think. Underneath it all, Digimon World DS is a monster collecting game that can be very addictive, which is probably the most important quality in this genre. Near the beginning, you’re given the choice of three baby Digimon that can eventually Digivolve into stronger forms. Unlike Pokémon, however, Digimon have a choice in their path of evolution if they meet the required stats. This means you can have a team of different Digimon that all spawned from the same egg, which is a rather novel idea that works well. You also obtain Digimon in a fairly unique way. By scanning non-boss enemies, you collect their data. Once you scan 100% of an enemy, you can reassemble the data into the respective Digimon at your farm.

The farm itself is probably your best friend when it comes to raising Digimon. Every Digimon is assigned a type, such as Dark or Dragon. These types affect a Digimon’s digivolution because some Digimon have prerequisites such as one-hundred Dark experience points, gained by defeating Dark-type Digimon. However, with the help of your farm, or Digifarm as it is known, but I am getting rather sick of sticking “Digi” onto every second word, you can quicken this process by placing your Digimon in a farm which specializes in raising Dark experience and leaving it there to grow while you do other important tasks such as helping out with a Digimon’s laundry. This is also a chance for the game to display one of its many glitches, however, and this one is a doozy. If your Digimon levels up too quickly in the farm (or sometimes even in your battle party) there’s a chance it will lose ALL of its stats while retaining its level. This means you have a Digimon that’s difficult to raise because of its high level, but is as weak as a newborn. You can buy farms from the Farm Shop in Digimon Central, where you can also upgrade their sizes and how much experience they produce. Next to the Farm Shop is the Farm Goods Shop where you can buy equipment to install in your farm. This equipment helps raise Digimon stats, elemental resistances, and friendship levels.

Raising your friendship level is a somewhat sore subject for me. There are a couple of ways you can raise this stat. The first is to battle often with your Digimon and not let them faint in battle; the other is completing quests for your Digimon. These are quests unrelated to the main plot that offer little reward other than making your Digimon like you a little bit more. Quite frankly, I stopped doing these quests after one of my Digimon asked me to go to the peak of a dangerous mountain to get him some toilet paper. Apparently in the Digital World shark teeth and fossilized dragon eggs are far more lucrative than toilet paper. I don’t even understand why there would be toilet paper at the top of a dangerous mountain dungeon in the first place.

Battles are your typical turn-based affair in which the fastest Digimon get priority. An attempt is made to give this system a more strategic element as both you and your enemy have a choice to place your Digimon on one of five spaces. This is a simple modification, but one that changes the flow of battle dramatically. I think that without this addition you would have no reason to use any other attacks than the ones which deal the most damage, but when your enemies are spaced out, you have to consider area of effect over raw damage. Don’t go thinking that this system is all to the benefit of your adversaries though, as every single Digimon has a passive ability which also affects the Digimon to which it’s adjacent. Examples include increases to strength or resistance to status ailments.

As far as level design goes, I found those in Digimon World DS greatly uninspired. They use a lot of cheap tricks to make dungeons artificially longer, such as an extremely high encounter rate and roads that lead to nowhere with not so much as a treasure chest as a consolation prize. Clearly, not a great deal of thought went into designing the dungeons.

Graphically, Digimon World is a vast improvement over the Digivice I played with as a kid. That being said, as a Nintendo DS game it looks painfully out of place. With graphics on par with a Game Boy Advance game, I had to wonder if it was even intended for the DS originally or just made on a very small budget. However, while the graphics are not impressive, I can at least say that it is full of bright colours and cute sprites which are to its benefit because it’s a children’s game. It is also entirely 2D, which I am sure is a blessing as I don’t have faith that they could have managed decent 3D graphics. Another complaint concerns battle attack graphics, of which there were few. When your basic attack has the same animation as Super Supreme Super-move, something has gone wrong. The same basic attack animations are used pretty thoroughly throughout the game and only very slightly differ between elemental attacks. What that equated to was a feeling of ambivalence towards learning a new attack, as you could pretty much guess what it was going to look like from the name and description. There are also some graphical glitches such as the teleporter to the Digifarm turning invisible as well as some of the larger Digimon getting stuck inside of installed “goods” in your Digifarm.

In the music department, I found the game standard at best. Everything sounds appropriate, but at the same time I felt as if the soundtrack was merely functional. The music isn’t bad, but it isn’t good either; it’s just there. Sound effects are also appropriate yet unimpressive; chests sounded like chests and teleporters sounded like teleporters (I assume). Yet again, however, some glitches rear their ugly heads. After returning from some dungeons, the same music keeps playing in Digimon Central. This is not a big deal, but it is still strange walking through a supposedly joyful city while obligatory sewer level music plays.

To say Digimon World DS is a game made for fans would be a gross exaggeration; it is merely the sort of game only a fan could love. If some of the glitches were ironed out before release and you were given a little more incentive to complete given tasks I would have been much more forgiving of this game’s faults. Unfortunately, the faults outweigh the merits, and with so many better quality experiences available, I find it hard to recommend.

Dated graphics (even at the time), non-existent plot, crippling glitches and bugs.

Those who are going to get the most enjoyment out of this game are already fans of the Digimon franchise. I don't see this game winning many people over.