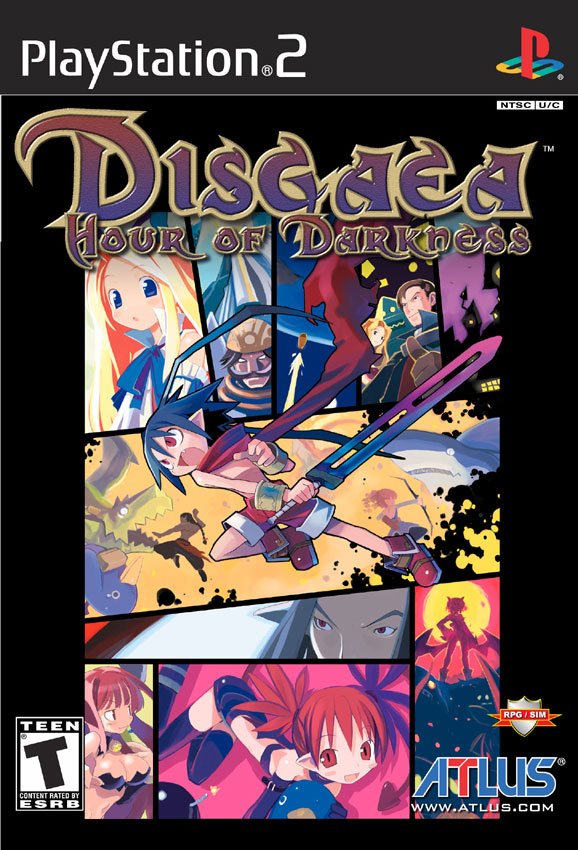 One of my fellow game critics described Nippon Ichi’s strategy RPG Disgaea best — he called it an evil game. I must wholeheartedly concur with that assessment.

Sure, Disgaea: Hour of Darkness isn’t evil in that horror film way — there are no monsters that pop out of your TV set like in The Ring or The Video Dead, nor will watching it lead to you getting strange phone calls and dying within seven days. No, Disgaea is a much more insidious evil — the kind that creeps into your life under the simple guise of a game and soon dominates your every waking (and occasionally sleeping) moment. It’s like being possessed in The Exorcist or a pod person in Invasion of the Body Snatchers — you still look like you, but you’re sort of a shell of your former self because all of your faculties are focused on the game. While in the grip of Disgaea, nothing else matters.

So, what makes the game so compulsive? Subliminal messages hidden in the game text? LSD-dipped game discs? How about engaging and open-ended gameplay? I think choice three is the winner there.

The beauty of Disgaea is that it’s many different things to many different gamers. Disgaea allows the player to determine how much he wants to experience of the game. With 150 different separate character classes, the ability to take characters to level 9,999, and a never-ending set of randomly generated battlefields, Disgaea is a game that can last for hundreds of hours. However, before all of the gamers who are pressed for time dash for the back button on their browser, keep in mind you don’t have to partake in any of this stuff to actually finish the game. As one non-playable character mentions in your castle, you can beat the game without getting into any of its finer nuances. I like this — a game that appeals to both those who just want to run through and move on as well as hardcore players who want to spend ages mastering everything. In this regard, Disgaea is something of an achievement in the field of game design.

To get into all the nooks and crannies of Disgaea would require thousands upon thousands of words — and no one would want to read a review like that (why would they when they could be playing the game instead), so, in the spirit of brevity, let’s just hit the highlights.

The major selling point of the game is the gameplay itself. While Disgaea may look like a traditional isometric strategy RPG on the surface, it does manage to bring a few new things to the table. The ability to enter any item in the game (from the lowliest healing item to the most powerful sword) in order to capture stat-enhancing residents who dwell in the items and make the item itself stronger is an ingenious decision. The game’s item world is where the hardcore players will hang out-buffing up their weapons, capturing residents to make their characters stronger, gain more experience, find more money, etc. The item world of Disgaea is an entire game in and of itself. I personally spent days in the item world without once fighting a story battle to advance the plot. Even now, with the main quest bested, I still return to the item world with great regularity — it’s that much fun.

Why is it fun? Because the combat system works so well. On the surface, Disgaea isn’t really any different than games like Final Fantasy Tactics Advance or Tactics Ogre. Players choose a party, move them about an isometric grid, and attack the enemies. Attacking from the side or behind gets the attacker a bonus, as does attacking from above…pretty traditional.

What isn’t so traditional are the combo attacks and the ability to throw characters around the map. Lining up characters with similar weapons will generally lead to team attack. Here, up to four characters can join in to do massive damage to one enemy. Hoshigami: Ruining Blue Earth attempted to include a similar system, but it was nowhere near as simple to use as the one found in Disgaea.

Even more fun is making totem-pole stacks of characters. It’s possible to make a stack of characters ten people high, then have the bottom person throw the stack repeatedly. This means that players can reach opposite ends of the map or areas well off the beaten path in a single turn. Players can also throw enemies — so if that Jack-O’-Lantern demon is too far from a strong character, have a weaker character throw him over and pound on him at will.

Another cool new wrinkle is found in the item world — geo panels and geo stones. Think the Law System from Final Fantasy Tactics Advance — only better — and players will have the basic idea.

Essentially, the maps in the item world can be covered with colored panels. Each panel (depending on what kind of stone is on that color somewhere on the map) has a status effect attached to it. These effects run the gamut — from invincibility to causing any character who lands on them major damage. Some of them will even clone the character on them — and believe me, players will definitely want to avoid having their high level characters cloned and having to fight against them.

If a player finds that he doesn’t like the effects on a map, he can move to the geo stones and destroy them — thereby eliminating the effect. The kicker is that eliminating a stone sets off chain reactions — which can damage both the good guys and the bad guys if they’re standing on a panel of that color. Better still, if another color geo stone is on the panel, it sets off another reaction — meaning players who plan ahead can wipe out an entire board of enemies by destroying a single stone. As an incentive for doing this, each battle has a set of bonus prizes — and the higher the bonus gauge goes (and setting off long strings of geo panels fills it up fast) — the more prizes the player gets.

It’s pretty safe to say that the gameplay is Disgaea’s strongest point, but what about the rest of the product? That’s all impressive, too.

Unlike many of the other strategy RPGs on the market, Disgaea eschews the convoluted, melodramatic, and heavily political storylines that are so popular in the subgenre. Instead, Disgaea goes for a lighthearted feel with a tale of a demon prince named Laharl and his quest to become the overlord of Hell. Hey, wait a minute…that sounds political and melodramatic…but it’s not. The narrative is presented in episodic format with quirky characters, funny dialogue, and even a bit of risqué humor thrown into the mix. There’s nothing at all heavy about Disgaea, and that’s a welcome change of pace.

The graphics, while hardly cutting edge, fit the tone of the story quite nicely. There’s a decided anime influence at work in the game, adding to the ambience of the title. While it lacks the next-gen graphics of a game like Gladius, there’s a lot of charm in these old sprites and still character portraits. Fans of 2D era gaming should be more than impressed.

If Disgaea has one flaw, it’s that it’s almost too ambitious for its own good. This is a massive game, and it’s easy to become a little overwhelmed while playing. The game eats up hours like Rush Limbaugh at a buffet, and the options for what to tackle next can be daunting. In this day and age, where gamers are treated to 20+ new titles a month, having something as involved as Disgaea is a little intimidating. However, since the game essentially allows the player to decide how much (or how little) of the sidequests he wants to see, this can’t really be used as a negative against the game. Disgaea does a fine job of remaining accessible to the casual player while still offering up all of the bonus stuff that the hardcore crowd goes nuts for.

In the end, that other reviewer was right — Disgaea is an evil game that will take over a gamer’s life if they’re not careful. With so much to do, so much to see, and so much to unlock, the completists out there will be spending hundreds upon hundreds of hours with this game. That’s not necessarily a bad thing, though — because when a game’s as good as Disgaea: Hour of Darkness, it deserves to be played.