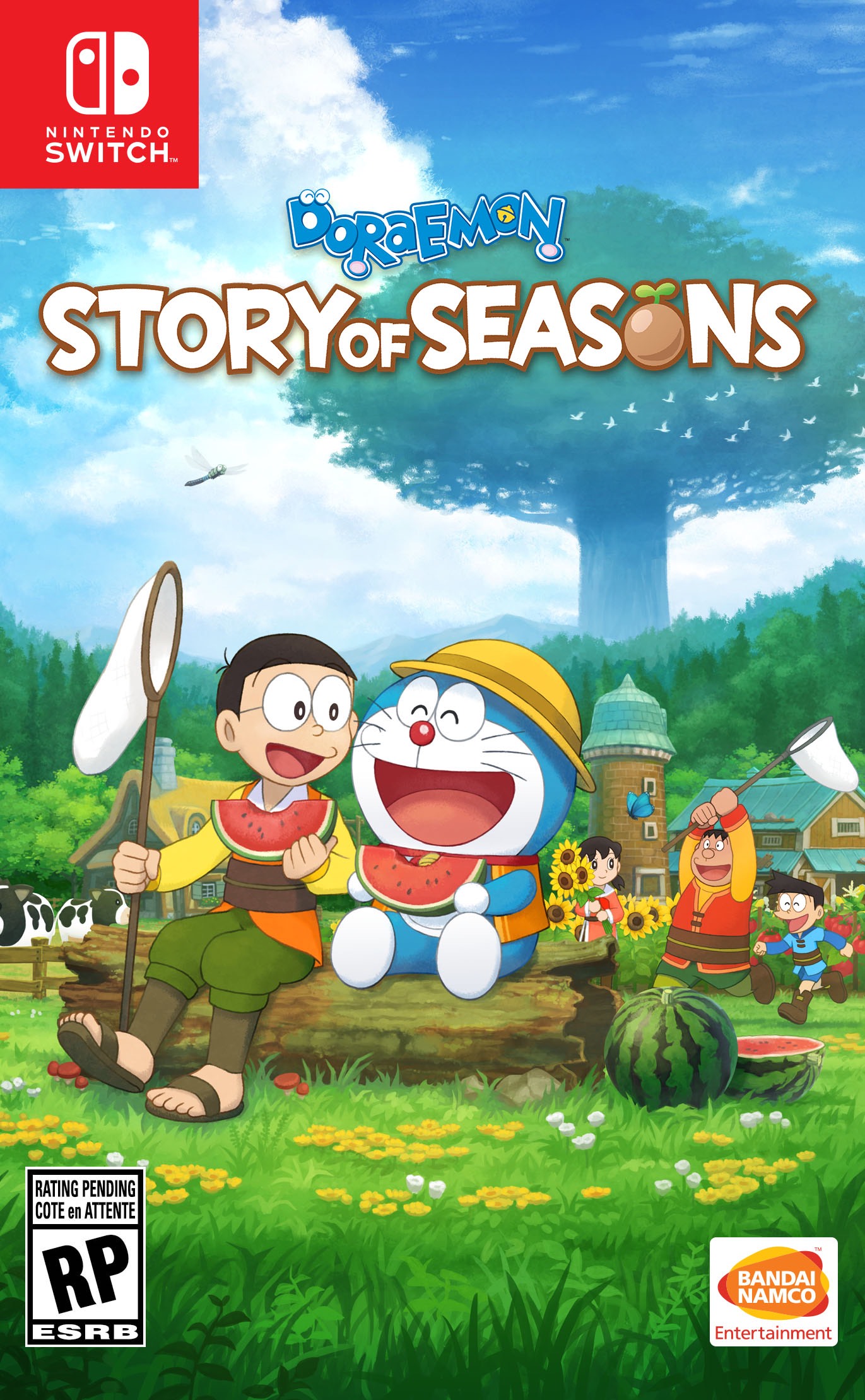 …a suitable entry point for new or younger players having their first go at this sort of game. It would likely be enjoyed by more experienced fans of the genre too, with the Doraemon elements providing something new…

Doraemon: Story of Seasons is a mash-up of the long-running manga/anime franchise Doraemon and the Story of Seasons franchise of farming simulation games (essentially a renaming of Harvest Moon that started in 2014). Not familiar with Doraemon? That would not be overly surprising, because despite the size of the franchise and rise of manga/anime fandom in the US, I don’t think Doraemon has had much penetration into US markets. As proof, consider the fact that Doraemon: Story of Seasons is the first game of dozens related to Doraemon to be brought to the States. Doraemon is the story of a lazy, nap-loving and somewhat foolish boy named Nobita Nobi — “Noby” in English translations — who is sent a robot cat from the future, named Doraemon, by one of his descendants. Doraemon brings with him a variety of futuristic gadgets with powers that range from silly, like a device that explodes and temporarily makes anyone caught in it act stupidly, to powers like that could put him on par with Thanos, honestly: teleportation, time manipulation, etc. The stories often show Noby and those around him using a given gadget to solve a problem or address a certain situation only to have it go awry somehow, often through Noby’s foolishness.

Doraemon: Story of Seasons story begins with Noby finding a strange seed which, upon being planted, quickly grows into an enormous tree that seems to warp time and space around Noby and his friends and drop them in a strange land. Not only does this leave them lost and confused, but Doraemon drops most of his gadgets during the trip, leaving them without any of the fantastic powers they could normally rely on. They stumble upon a rural town and are quickly introduced to the residents with each of them ultimately starting to work in the town until they can find a way home. Noby is put in charge of an empty farm and tasked with getting it up and running. As time progresses the story proceeds in two dimensions: the main plot of Noby, Doraemon, and friends trying to find a way home and learn about the giant tree that brought them there (as well as getting some of Doraemon’s gadgets back) and the secondary stories of the townspeople, all of whom you can bond with over the course of the game.

The story progresses in a slow and relaxed manner, befitting of the nature of Story of Seasons; there is never a sense of urgency for Noby and company to get home necessarily. Just about all of their interactions in the town, except the occasional run-in with the labor-loving mayor, are pleasant and inoffensive. The only thing that disappointed me slightly was the level with which the Doraemon characters and lore were engaged. Not long after getting to the town, Noby is on his own and only interacts with the other characters, even Doraemon, through the occasional story scene or casual greeting. There are more scenes with them as the story progresses, but I did not feel I was learning much about them given my lack of familiarity with the franchise. I could see this as a strength, as it might be difficult for audiences to pick up the game (especially abroad) if it were supersaturated with Doraemon lore, but I would have liked to learn a bit more through the game itself. Based on the way they are discussed, many of the gadgets referenced throughout the story have clearly been used in past adventures yet information on any of those adventures is sparse.

The gameplay in Doraemon: Story of Seasons will be familiar to anyone who has played the older Harvest Moon titles or other similar farming sims. You are given a finite amount of time each day to undertake certain activities to maintain your farm, such as raising crops (planting seeds, watering them, harvesting) and livestock (feeding and caring for chickens, sheep and cows). In addition to farming, there are a variety of other things to do such as mining, fishing, bug-catching, and gathering wild plants. All of these tasks require stamina. Overextending yourself can lead to a trip to the clinic and wasted time, so management of stamina and work you undertake each day is central to the game. This is where I found a lot of the enjoyment of the game — waking up and starting each day and planning what to do. Some days I would, after watering my crops, dedicate myself to the mines digging for ores to upgrade my tools. Other days, I might walk around town looking for bugs.

The sense of progression in the game primarily comes from upgrading your farm: expanding your house, for example, or upgrading your tools. The latter of these I found extremely important, as better tools allow you to do things like water multiple patches at once or mine deeper for more valuable ores. This ultimately lets you make much more efficient use of Noby’s stamina. As you progress, Doraemon’s gadgets eventually make an appearance and further enhance your abilities. My favorite was the one that let me fast travel, which saved a ton of time and was introduced pretty early on. Another useful feature is that Noby can basically lie down anywhere to take a nap and recover some stamina at the cost of daylight, which makes appropriate use of one of his bad habits.

While there is a relatively wide variety of tasks around the farm and the surrounding town, I did find Doraemon: Story of Seasons getting a bit repetitive as the game progressed. I don’t think this was necessarily due to the nature of the genre itself, but rather due to the lack of depth in some of the systems. There wasn’t really a lot to think about in the fishing or bug catching systems, and even the farming seemed basic with few considerations other than which seeds to plant in which season and what kind of fertilizer to use to improve crop quality. Thus, there was an overall feeling of having plenty to do but delving into any one task did not yield much additional enjoyment. That said, I think this could be pivoted into a strength because the game is easy to play. Based on the thoroughness of the game’s tutorial and the general pacing of the game, I think it could be a good one for new or younger players inexperienced with these types of mechanics. I should also note here that there are no romantic elements in the game, as romance/social components are often a part of farming sim games. This should be obvious given the nature of the characters and franchise, but it bears clarification in case someone was expecting it.

Graphically, Doraemon: Story of Seasons has a suitably relaxed and peaceful aesthetic. This is probably best evidenced by the way the game kind of fades into a white border around the edges, invoking an almost storybook style. The character portraits are also drawn well, with various expressions that seem to match the original manga designs. Aside from those unique highlights, however, the rest of the graphics are more or less average but acceptable for a title like this. The same can be said of the game’s auditory selections. The music is mostly relaxed and stays in the background or is generally subdued. There were many times where the game felt outright quiet, which is great for certain tasks, but also does not allow the music to build out the experience. It’s fitting for what the game is, but I would have preferred a little more variety in the tracks. There are some limited character voices but only for select lines that give you a general sense of the character you are speaking to and nothing more.

Overall, Doraemon: Story of Seasons is a standard entry in a long line of farming sims with just a touch of the Doraemon franchise to differentiate it from the competition. It hits all of the typical farming sim notes, if sometimes in a basic way, which makes it a suitable entry point for those who may be younger or having their first go at this sort of game. It would likely be enjoyed by more experienced fans of the genre too, with the Doraemon elements providing a new element. The fact that the game is on a versatile console like the Switch counts for a lot too. I think this name recognition value will go a lot further in Japan than it will in the West, but at the same time, I am glad we are seeing localizations of franchises like Doraemon which have a rich history. I honestly hope it leads to more games with these characters being brought to wider audiences.

A former RPGFan editor, Derek Heemsbergen, worked on this game. This relationship in no way influenced the reviewer’s opinion of this game or its final score.

Can be repetitive, may not stand out from similar games.

Solid farming sim entry with a sprinkle of a historic manga franchise.