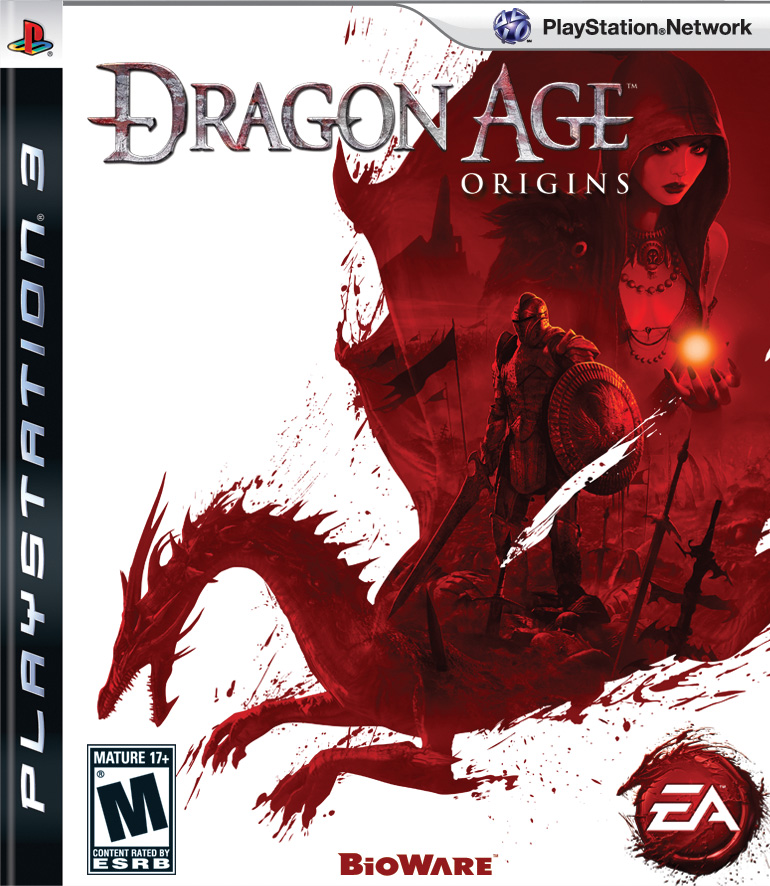 Dragon Age: Origins is my first foray into a BioWare title that isn’t Mass Effect. That’s right, I haven’t played Baldur’s Gate, which Dragon Age has been claimed the “second coming” of. You will also see no comparisons to other PC RPGs from me, because I simply haven’t played them. What you will get, though, is a breakdown of why I think that despite being an obvious step down from the PC version of the game, Dragon Age: Origins is very much worthwhile on the PS3 & 360 if those are your only options. As a note, I played the game all the way through on the PS3, but see minimal differences between the versions after watching friends play on the 360.

It’s really not possible to recreate the experience I had as a player in this review. I surely didn’t experience everything the game has to offer on my one playthrough, which speaks volumes about the amount of content the game has to offer. I could probably play through this game three times over and still miss something. Some will mark this as a negative, citing they don’t have the time for that and I can’t fault them; but those with the time and willingness to seek everything out will be rewarded substantially.

Dragon Age is steeped in so much lore and background information that it can sometimes be a daunting task to keep up. I have never seen a fantasy world created with so much care and craft for the storytelling as I have here, even if the story isn’t quite one of the best I have experienced. There are six different origins stories to choose from (which will be further explained later), all with varying ways to play and finish them. BioWare has expanded on the choice system used in previous games, such as Mass Effect, and your choices affect much more than just NPCs reaction to your character in dialogue. NPCs will open up shops and charities if you donate money to them and help them out, characters will be in different places depending on which origins story you choose and how you play it out, elections will be won or lost depending on whose side you choose and side characters, both major and minor, will be killed off in different fashions. I’m surely missing something, but you get the point. Dragon Age has more story options than any other RPG this console generation.

The story takes place in the kingdom of Ferelden where the darkspawn, evil creatures that live under the surface, are trying to start a blight: the first war against the surface inhabitants of in 400 years. Sensing the presence of the Archdemon (the biggest, baddest evil being in the land), Duncan, the leader of the legendary Grey Wardens, seeks out warriors to stand and fight. Your character, no matter what origin and specialty, will come across him to be recruited. You must go through the ritual of becoming a Grey Warden, which consists of drinking the blood of the darkspawn to mix it with your own in the hopes of becoming stronger. Not every person who goes through this ritual survives (you even witness a colleague who does not), but you manage to survive. After that it’s time to go to battle with the King Cailan and his army. During the battle you witness the betrayal of the king by Loghain, who was supposed to join in battle after a siege upon a tower. Instead of battling, Loghain retreats with his men, leaving everyone else to fend for themselves against the darkspawn. Duncan and Cailan get slain in battle and Loghain starts a campaign to promote his daughter, the current Queen, as the new ruler of Ferelden. He also convincingly proclaims the grey wardens as the reason the battle was lost and calls them traitors. He did not, however, expect the main character and his/her crew to survive.

It would be wrong of me to explain any more of the story and deprive you of the experience. You will be engaged by the story, but the characters were the highlight for me. They all have comprehensive backstories that get revealed to you piece by piece and I felt attached to the ones who frequented my party. The decisions make regarding them really make you consider the consequences and there was many times where I would sit compelled for a few minutes before deciding what to do. (Sure you could cheat by saving before every decision to see how each one plays out, but I think it takes away from the moment.) The end of the game, which includes a massive decision in regards to the story and your characters, is top-notch and well worth the 50-60 hours it will take you to complete the game. Overall, the story is nothing new, but it is told well and with gusto.

At the start of Dragon Age: Origins you create your character from 3 different classes and races, with 6 different backgrounds to choose from based on the race you choose. This will be your particular origin story. Once you are done picking out of these options you get the usual character creation tools, from changing the color of your hair to the personalization of your stats, skills, and talents. Skills range from potion making to combat training, while talents are your character’s battle actions and traits; typical PC RPG stuff, or so I’m told.

Most of the game consists of killing enemies, looting their booty, and getting new equipment from shops. There are also plenty of sidequests. Some involve battling lots of creatures and some consist more of talking and decision making, so a lot of tastes are appeased. Personally, I recommend doing a mixture of both. There were times when I was battling creatures for hours and I found it a little repetitive, so doing the “talky” sidequests was good for breaking up the monotony. That isn’t to say that the combat is dull, but killing the same monsters with the same actions can get repetitive in any game.

Combat wise, Dragon Age reminds me of FFXII (not having played any other PC RPGs up to this point). All of the action is realtime and selecting the attack button executes your characters melee combat until you tell them to do otherwise. It also happens to have something similar to the Gambit system where you can set up specific tactics for your characters to act on given specific requirements. Pressing the left shoulder button pauses the game and pulls up a radial dial that allows you to select through your inventory of items or pick a specific skill/talent. You can also set your six different shortcuts for your skills and talents to different buttons on the controller. Six seems like a lot at first, but towards the middle of the game when you start leveling up and getting more skils and talents, it becomes harder to figure out which ones to choose as your shortcuts. This is one aspect of the game that is better the PC version as you can set more shortcuts to the different keys on the keyboard. During the game you can have up to four characters in your party at once and can switch between them freely, but once again the PC version trumps here because you can zoom out and look at the whole battlefield while the game is paused to form a strategy. I’ve been told they toned down the difficulty in the console versions because of this missing feature.

I was obviously much more enamored by the dialogue options and choice system than I was the combat. Because of the strong story and character options, I was able to get easily addicted to this game, but the combat is probably the sole reason I won’t be calling this game a classic when this console generation is over with. It’s not bad and I had some fun with it, but I was often a little frustrated by the repetitiveness. It could have been because I was a warrior, but this is how I play every game. Take that as you will.

The graphics aren’t anything special and some will argue they are borderline ugly for this generation, but they are missing the point. This is not a game that tries to be a technical powerhouse to go along with everything else like a Final Fantasy or Mass Effect (the irony of this statement in terms of Mass Effect is intended, by the way). It gets the job done and the game runs smoothly. The load times can be a little long despite the game installing to the hard drive, but they are only a small annoyance. The framerate holds stable most of the time (getting lots of enemies on the screen slows it down, but not to the point that it becomes unplayable) and characters have good facial and battle animations. The draw distance isn’t that great and pop up is frequent, but a game of this scale will have that. It still creates a great fantasy atmosphere and draws you in to its world, and that is really all I ask.

In terms of sound though, the game is a minor masterpiece. The voice acting is stellar across the board and the dialogue that accompanies it is equally impressive. Every major character has a distinct personality and the voice acting enhances it. Even the shops and minor characters have good voice acting. BioWare has always been stellar in this area, but this is their best yet. I found the soundtrack to be effective but forgettable. I really don’t remember any of the music beyond the final scenes, but it’s more atmospheric music anyway. It didn’t take away from my experience, though, since the game’s other aspects got me so involved that I did not even try to listen to the music.

This game is among the very few great RPGs on the PS3 along with Demon’s Souls, Fallout 3, and Valkyria Chronicles, but it is probably my least favorite of those. It isn’t nearly as innovative as any of those titles were, but it makes up for that by being a well polished game. BioWare is a legendary RPG company and this continues their streak of greatness in this console generation. Dragon Age: Origins won’t set the world on fire, but it just might start a flame in your heart.