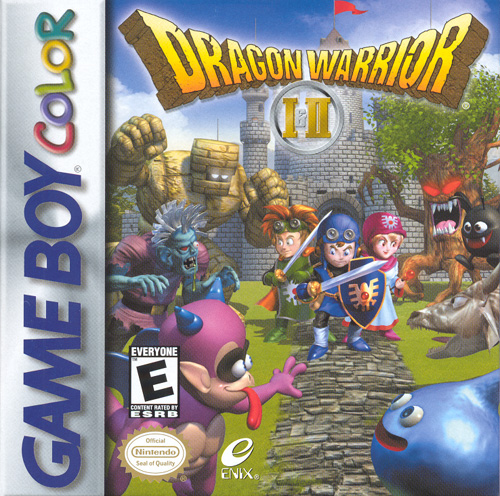 Almost from the moment of its first release, Enix’s Dragon Quest (Dragon Warrior in the US) series became the most insanely popular RPG series to ever hit Japan. Although the series failed to reach the same heights in the minds of US gamers upon its stateside release, it is remembered fondly by those who had a chance to experience this member of the first generation of console RPGs. Enix’s decision to re-release the first two Dragon Warrior games on a single cartridge for the Nintendo Game Boy Color portable console proves to be a wise one; although the games really don’t stand up to the better RPGs of today, they still prove to be a worthwhile experience for owners of the handheld system as well as an interesting historical footnote for the revered genre.

In Dragon Warrior I, RPG fans play as a descendant of Loto, a legendary hero in the land of Alefgard. Years ago, Loto had saved Alefgard by using the Light Orb, a sacred artifact, to drive away the monsters terrorizing the human population there. However, in Dragon Warrior’s present, an evil wizard named DracoLord has stolen the protective orb, and monsters have begun to run rampant once again. To make matters worse, DracoLord has also abducted Lady Lora, the princess of Alefgard epicenter Tantegel Castle, in an attempt to claim her as his wife. So, it’s up to our protagonist to save Lady Lora and put an end to DracoLord’s threat.

Dragon Warrior II takes place about a hundred years after the events of the first game in the series. After defeating DracoLord, the hero of Dragon Warrior founded his own kingdom in Alefgard. Some of his descendants did the same in turn, and as Dragon Warrior II begins, Moonbrook, one of these kingdoms, has suddenly been attacked by an evil general named Hargon. The unsuspecting kingdom is completely wiped out in the surprise assault, with only a lone soldier escaping to tell the tale. Fortunately, he is able to reach Lorasia, another major kingdom, and inform the king there of what has happened. And that’s where the player comes in; as the prince of Lorasia, it’s your responsibility to unite Loto’s descendants and stop Hargon from achieving his sinister goals.

Unfortunately, Dragon Warrior I and II’s storyline is its weakest individual facet, and, perhaps surprisingly, it’s where the game shows its age the most. Compared to most RPGs of today, even many of the bad ones, Dragon Warrior’s plot is annoyingly simplistic to the point where it doesn’t even inspire a passing interest from players. The mundane save-the-girl-and-kill-the-evil-wizard premise exhibits absolutely no depth, complexity, or subtlety, and character development is at an absolute zero.

Dragon Warrior’s storyline also does a terrible job of guiding the gameplay of the RPG. There is virtually no plot progression whatsoever, and the only way that players know what to do next in the game is by wandering around near-aimlessly, following the occasional vague clue spouted off artfully by a random townsperson. Fortunately, Dragon Warrior’s storyline woes are alleviated somewhat in the marginally more interesting Dragon Warrior II, but the storyline in the sequel is still frighteningly simplistic even when compared to most of the weaker RPG storylines of today.

The translation in Dragon Warrior I and II is solidly done but unremarkable. Spelling and grammatical errors are avoided for the most part, and the dialogue flow of the relatively sparse text is passable. But overall, the game’s translation doesn’t really add anything to its plot, though the argument can be made that there isn’t enough plot to be enhanced by strong dialogue in the first place.

Like its storyline, Dragon Warrior I and II’s gameplay is extremely simple. However, the game fares much better in its play because what’s there is executed quite well. The randomly encountered battles are strictly turn-based, and commands within them are executed quickly, preventing them from dragging on. Spells and items can be used in battles, and although the selection of them is very limited, nearly all of those available are useful. This provides a welcome contrast to most of today’s RPGs, where approximately 50% of the available items and spells often go untouched.

The excessive simplicity in Dragon Warrior I and II’s gameplay still irritates at times, though. In Dragon Warrior, there is only one playable character throughout the entire game, and you never encounter more than one enemy at a time. As anyone who has played an RPG can guess, this limits the amount of strategy in battles to an almost nonexistent level. Fortunately, this design flaw is corrected in Dragon Warrior II; your party in the sequel consists of three characters, and enemies attack in groups.

Dragon Warrior I and II also has a few other layout problems. The item limit for your inventory in both games is extremely restrictive; even though you can store excess goods in a bank, it’s a lot of extraneous menu management that really doesn’t do anyone any good. The need to light torches to illuminate dungeons in the series’ initial installment is similarly annoying. Dungeons aren’t particularly well designed in this one either; most of them are overtly convoluted in a rather aimless manner.

Dragon Warrior I and II’s control is quite strong, fortunately, and it definitely aids the gameplay. Your onscreen character moves in four directions, and he does so quite responsively. There’s no dash button, but you move with enough speed so that it’s not sorely missed. The menus, though simple, aren’t the easiest to navigate, but they manage not to become a problem.

Graphically, Dragon Warrior I and II, not surprisingly, fails to hold up to its present-day cohorts as well, but considering the puny graphical processing power of the Game Boy Color, the visuals aren’t too bad. The game features sprite characters on 2D backgrounds, and everything is reasonably well drawn, especially when the small size of the sprites (and the Game Boy Color screen) is taken into account. Colors are sorely lacking in just about every screen, but once again, the limitations lie with the hardware, not the software.

The sound effects, on the other hand, are less excusable, even in light of the game’s hardware restrictions, because they are really, really annoying. Nearly every sound effect in Dragon Warrior I and II sounds like some sort of derivative of either a high-pitched beep or someone rubbing their feet on sandpaper, and they really begin to grate after about five minutes of play. Obviously, there is no voice acting in the RPG.

The sound department of Dragon Warrior I and II is somewhat salvaged by the soundtrack. Koichi Sugiyama’s first two Dragon Warrior scores are quite solidly composed, featuring the grandiose symphonic style that he has become famous for as well as a few truly compelling melodies. The weak sound system of the Game Boy Color does really blunt the impact of the music’s composition, but careful listeners should be able to appreciate the melodies that have made Sugiyama one of game music’s most respected composers.

Dragon Warrior I and II certainly doesn’t hold up that well over the many years since its contents were originally released, especially when directly compared to the better RPGs of today. RPG fans born and bred on the Final Fantasy VII era of RPGs may find Dragon Warrior I and II to be incapable of holding their attention spans. However, if you want to experience the game that first established RPGs as a major genre, or if you just want a solid RPG that you can play on the go, your time and money are quite well spent on this one.