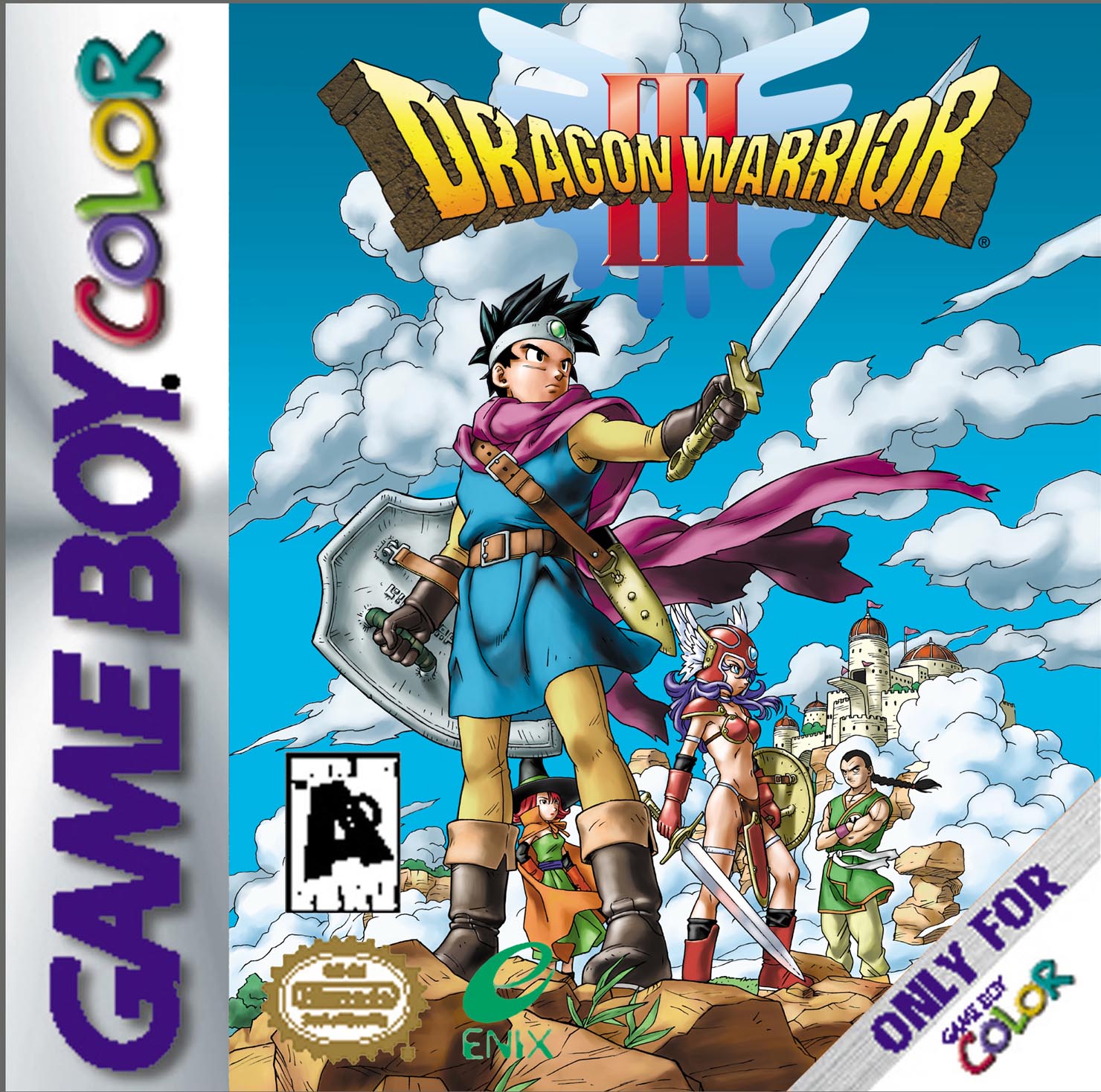 Dragon Warrior III is the legendary RPG series’ second release on Nintendo’s Game Boy Color hand-held console. Originally created for the 8-bit Nintendo Entertainment System, Dragon Warrior III’s portable remake doesn’t live up to the standards that today’s finer RPGs have set, especially in its storyline and sound. It does, however, present a pleasantly nostalgic RPG experience for longtime fans of the genre, and it’s a significant improvement over Dragon Warrior I & II, the vaunted series’ first Game Boy installment.

As Dragon Warrior III opens, the kingdom of Aliahan resides in grief over the loss of a hero and in terror of a tangible evil threatening its livelihood. Years ago, Aliahan’s celebrated soldier Ortega left on a journey to vanquish the demon lord Baramos but never returned and has been given up for dead. However, Ortega did sire a child (the child’s gender is chosen by the player) before vanishing, and that child is the protagonist of Dragon Warrior III. So, it’s up to Ortega’s offspring to seek out Baramos and defeat him, thus ending the demon’s terrifying hold over the land’s citizens.

Although Dragon Warrior III’s storyline is well improved over that of its predecessors, it’s still unlikely to inspire interest from RPG veterans. Like those of the first 2 Dragon Warrior games, the event-based portions of the plot are quite pedestrian, as far as fantasy-setting RPGs go, and character development is at a near-zero level. There’s almost nothing in the game’s plot that is likely to truly draw players in.

To its credit, however, Dragon Warrior III does carry a competent if not spectacular translation. There isn’t a whole lot of depth to the game’s dialogue, but it flows pretty well, and it avoids spelling and grammatical errors admirably. It also carries moments of innocuous humor, which almost always adds to an RPG’s appeal. In addition, Dragon Warrior III does a bit better of a job in giving the player some direction in the game’s quest than its predecessors did, especially the near-aimless Dragon Warrior I.

Dragon Warrior III also struggles a bit with its sound. On one hand, Koichi Sugiyama’s classically symphonic pieces are impressive in their construction, throwing forth an abundance of compelling melodies and conveying a mood to their settings quite well. On the other, however, the sound capabilities of the Game Boy Color make Sugiyama’s work almost a wash; the sound programming is so poor that it’s often excessively difficult to figure out what he’s trying to do compositionally.

Outside of its storyline and sound, however, Dragon Warrior III proves to be a very solid traditional RPG. It uses mostly tried-and-true gameplay mechanics, such as randomly encountered battles, turn-based combat, and the presence of items and magic during the fight scenes to aid allies or attack enemies. For the most part, the execution of the gameplay is excellent. Commands are carried out quickly and sharply, and combat speed is admirably swift. The series’ third installment also allows you to take 4 characters into combat at once, which adds more strategy and complexity than the previous Dragon Warrior games featured.

One noteworthy facet of gameplay is that Dragon Warrior III is the first game in the series to implement a job system. When players reach a certain point in the game, and characters reach a certain level, they have the option to change their character class. Doing so reduces them to level 1 in terms of experience, but they retain all of their skills and spells from previous classes and can then add those of their new class to their repertoire as they learn them. This feature is excellent, because it allows a good degree of character customization and allows players to try to address their characters’ weaknesses.

In spite of its overall strength in gameplay, Dragon Warrior III does carry a handful of problems in this department. Although it has reportedly been reduced from the original version of the game, the enemy encounter rate is still annoyingly high, and it really interferes with the pacing of the game. In addition, the RPG has major difficulty balance issues. Because of this imbalance, players will likely spend countless mind-numbing hours just leveling up their characters, instead of being able to progress steadily forward in their quest.

Dragon Warrior III is also plagued by the same layout problems that afflicted its predecessors. The dungeon designs show little vision or direction; they seem complex only for complexity’s sake and force players to wander aimlessly for extended periods of time. The restrictive item inventory limits are still here, too, resulting in superfluous menu management.

Dragon Warrior III’s control is excellent; it’s perhaps the strongest individual facet of the game. Your party can only move in 4 directions, but it travels swiftly and responsively though towns and dungeons. There’s no dash button in the game, but considering how fast your onscreen characters move, it’s really not needed. World map movement is slower than area map movement, but it’s still sharp and at a respectable pace when compared to other RPGs.

The menus in the series’ third installment are also well designed. They are exceedingly simple, but they are easy to navigate, and they display most of the necessary information for the characters. It’s still irritating to have to go talk to a king to find how many experience points a character needs to level up, but at least players won’t be left out in the cold on most other character stats.

Visually, Dragon Warrior III won’t impress anyone who’s played a non-Game Boy system any time in the last 12 years. However, the game does boast arguably the best graphics yet seen on its platform. The backgrounds show an unprecedented amount of detail (for the Game Boy Color, at least), and the small character sprites are respectable for their size, too. Colors are lacking when compared to games on systems of today, but Dragon Warrior III’s area map stills are more vivid than this reviewer thought possible on the Game Boy Color.

Also commendable are the battle scenes. Although the screens lack backgrounds, the animation of enemies there is smoother and more detailed than anything I’ve ever seen on an 8-bit system. On the downside, in keeping with Dragon Warrior tradition, your characters aren’t visible at all in battle.

Although it does possess some significant flaws, Dragon Warrior III is the RPG genre’s strongest US-released entry on the Game Boy Color. If you have the system, don’t miss out on the game.