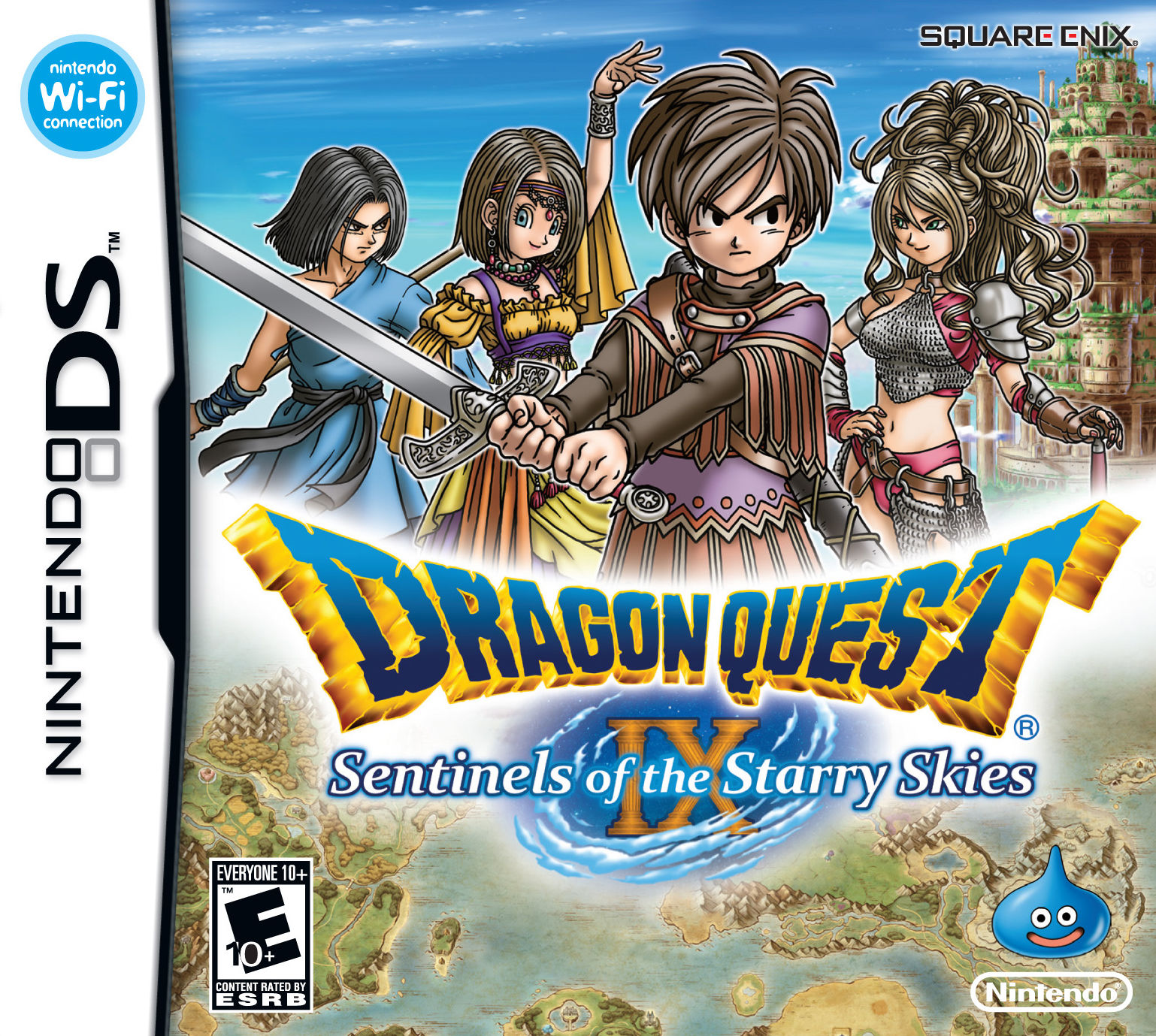 I’ll begin with a slightly embarrassing disclosure: prior to DQIX, I had never seriously played a Dragon Quest game. I’d fooled around a bit with DQIII on NES back in grade school, and I got to first base with DQVIII a few years ago, but it was only through this year’s entry that my relationship with the series was fully consummated. Fortunately, unlike a few other firsts in my life, this one did not end with derisive laughter, sore calves, and an awkward phone call the following Thursday. Instead, I was pleasantly surprised by the attractive graphical style, groovy music, and amusing game mechanics. While there are a handful of design choices and gameplay issues that take the game just a notch below must-own status, DQIX is a delightful tryst in traditional JRPG territory.

Dragon Quest IX makes a lot of safe choices from a game design perspective, then slaps on some extra features as a form of atonement. You’ve got your standard 3D world exploration, dungeons, towns, armor shops, and other typical JRPG haberdashery. Encounters are turn-based with standard menus in which one can select “attack” or “run” or what have you. Enemies are visible on screen before battles, a nice convenience if you’re just not in the mood or have a headache or something.

Strong presentation and graphics make the endless battling more fun than tedious. The tension attack and job skill system adds a cornucopia of cool moves. There is a good deal of overlap, but each job class has a set of weapon skills and a unique array of job talents that can be acquired by allocating skill points, accrued with each level up. This allows you for highly detailed character customization, as you can choose to focus on one weapon, job talents, or a mixture of weapons and job skills.

There’s also a whole mess of optional sidequests. These little romps add some much needed girth to the basic narrative, and function as a sort of achievement system. DQIX also has local multiplayer, an enjoyable diversion if you can get three of your loser friends together in one place. And on top of that, there’s even a pretty bitchin’ item creation system.

But I give to thee these criticisms three: low challenge, linearity, and lack of additional save slots.

The first point is of course relative, as all my readers know that I am the hardest of the hardcore when it comes to RPG’s… OK, maybe not, but still, this game is very solo-able, if you catch my drift. Adding support members to your party is really just about saving time. I didn’t die once, and grinding is cake, especially if you farm experience off of metal slimes early. Even without grinding, few bosses will throw you a curve ball that an extra potion or two can’t fix.

The other two points are quite simple. In spite of DQIX’s bonus quests and cool features, it’s a very linear game. The basic gameflow is so predictable that many folks (including me) will probably get fatigued around the twenty hour mark, especially if you’re not loving the story. It feels dumbed-down in a way. A few of my Japanese gamer friends (big DQ nerds) even called the game “Dragon Quest-lite.” The fact that the game only allows for one save slot just adds insult to injury. You can’t even experiment with different main characters, job classes, or choices since everything has to be saved on one file. Square Enix claimed that this was a cartridge space issue, but I have trouble buying that after playing Infinite Space. It seems more likely that they realized that a lot of Japanese fans would gladly buy multiple copies of a DS game, and with over two million in sales, they were clearly right.

DQIX is a lot of fun to play, but not one of my absolute favorites, even just among DS games. There are a number of SRPG’s that will challenge you more and offer more variety. Still, as far as handheld JRPG’s go, this one is solid and probably a must-buy for series fans. There’s a lot to like.

DQIX is an attractive DS game all around. The art style manages to effectively create bright and pleasant 3D characters without the creepy puppet-people look of a few other DS RPGs that shall remain unnamed. What will likely impress people the most is the unique look of the weapons and equipment. Not only will you customize the physical appearance of your characters, but every piece of armor and every spear has its own design that you will see animated in and out of battle. I had a lot of fun with this, and I gave myself an added challenge by choosing armor exclusively on the basis of style with zero regard to defensive capability.

The environments are also fairly large, and detailed enough that you’ll spend loads of time opening cabinets and searching the depths of wells. There’s also a good variety of monsters, nicely animated cut-scenes, and decent effects and animations during battle. Pound for pound, DQIX is a sexy DS title that should easily impress most RPG fans.

DQIX’s soundtrack is solid, though not epic. The series theme is translated well onto the DS and the battle music never gets old. None of the songs are tedious, though there were some forgettable village themes. I could take or leave the overworld music, and the best you could say about most of the dungeon songs is that they fit. Sound effects could have used more variety, and there’s no VA to speak of (or complain about).

In DQIX you will create both your main character and comrades, all of whom are silent. You play as a guardian angel charged with the task of opening the way to paradise for the angel realm by doing good deeds for humans. Early in the story, a catastrophic event causes you to fall from the angel world and become mortal, from which point the story begins in earnest as you must now investigate the cause of your predicament while continuing to aid humanity.

It’s not a bad premise, but the pace is slow, and it never strays from the standard town-dungeon-town-dungeon progression. The quests add a nominal degree of non-linearity, and you can lose yourself for dozens of hours by endlessly switching job classes, grinding, and customizing characters. Nevertheless, the fact that none of your characters talk is jarring, given the number of unreasonable requests you are given. Instead, an annoying fairy named Sundae (I’m assuming that’s how her name will be spelled) speaks on your behalf. For people who enjoy being represented by an overly made-up, orange-tanned valley girl, there is much to rejoice in here. For everyone else, not so much.

DQIX controls fantastically. Combat, exploration, and menu navigation are all straight-forward and will present no issue for anyone who’s ever played an RPG. You almost never have to use a stylus, though you can if your left thumb gets sore; simply drag the stick in the direction you want to go and the character will move. The stylus is also great for equipment management, and it is a gas to use when you’re playing dress-up with character outfits thanks to an idiot-proof drag-and-drop control scheme.

Dragon Quest IX is the quintessential DS RPG. It epitomizes the platform’s strengths while managing to mute most of its weaknesses. It’s a fun game with a cute story and a difficulty level that will welcome casual players. It also offers enough variability and special features to make JRPG fiends rejoice. What the game lacks in substance, it makes up for in style, thanks to strong graphics and an enjoyable soundtrack. Like its predecessor, DQIX is bound to score with fans and bring many more westerners into Dragon Quest fandom. You’ll want to go all the way with this one.